NetCredit reveals the cost of essential food around the world 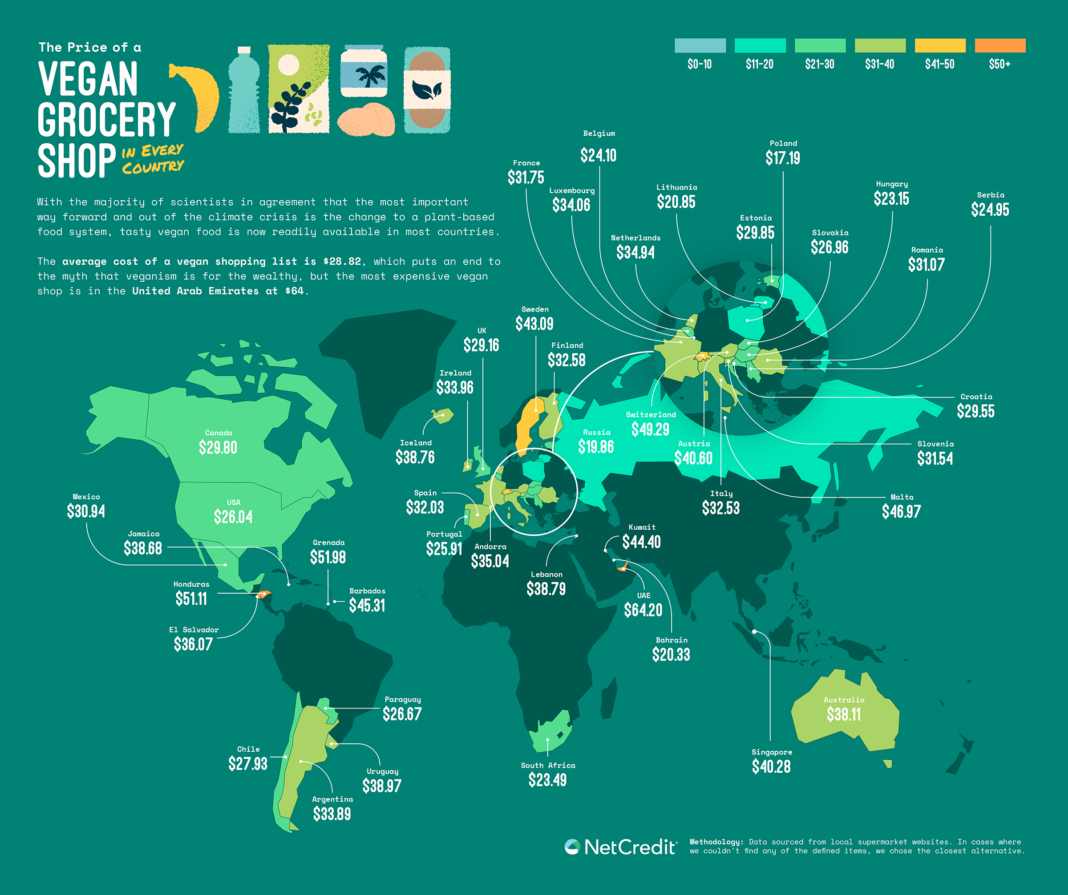 In the study, the team designed a shopping list of staple foods, how to review, how much it would cost to buy in grocery stores worldwide, plus affordability compared to local wages.

The key findings held that; Switzerland has the most expensive essentials in the world – costing $52.95 for a regular basket of groceries; which will cost only is $6.89 in Djibouti; the United States has the most affordable regular and vegan essentials in the world – about 12% of the average day’s pay per sample basket food. Meanwhile, the UAE owns the world’s most expensive vegan food, costing more than double its non-vegan equivalent.

Summarily, Djibouti, Moldova, and Paraguay possess the world’s cheapest groceries – with the US being the Most Affordable.

To arrive at these conclusions, NetCredit first compiled a shopping list of necessary foods. The list was then cross-checked against prices listed on supermarket websites around the world. The affordability of these baskets was calculated in each country as a percentage of the average daily wage.

The research revealed that two of the top ten most expensive countries have relatively low wages: Jamaica and Cambodia. The basket costs $49.70 in Cambodia, which is ranked third in the world. Furthermore, the average daily salary is only $5.28, implying that, the average worker would have to work for nearly 912 days to afford basic groceries. However, NetCredit claims that this disparity is caused in part by earnings and lifestyle differences between urban and underdeveloped country regions.

The research also reported that the United States has the most affordable groceries in the world thanks to large stores and bulk purchasing, allowing for a 12% -11% affordability rate. However, because the United States has some of the world’s worst economic inequality, going grocery shopping is still an anxiety-inducing activity for many Americans, the study revealed.

The same research was carried out using a veganized shopping list and found out that; the cheapest vegan essentials are in Poland, but the most affordable, are in the United States. If you switch to a vegan diet, the US jumps from the world’s 33rd cheapest grocery haul to number 10 – in fact, the American vegan basket costs just 33 more than the regular one, the study revealed. Poland takes the top spot for the cheapest place to buy basic groceries if you’re a vegan. This is partly due to a lack of vegan products in Djibouti and Moldova, where non-vegan groceries are cheaper than in Poland. Paraguay is equally less expensive than Poland until you go vegan: the cost of a basket of food in Paraguay doubles when you stop eating animal products. It rises by just under $4, or 26%, in Poland.

The vegan essentials in the United Arab Emirates are the most expensive, costing 61.7% more than their regular counterparts. Although a basket of vegan food costs nearly $4 less than standard, Switzerland remains a pricey market. Other countries where the vegan shopping list is less expensive than the regular version include Iceland, Jamaica, and Australia.  You can check our full data on grocery prices around the world here.

Damoy Robertson
Damoy Robertson is an entrepreneur and founder of The Vegan Review. Damoy is dedicated to spreading veganism to the masses which he believes will enable people to make better, more informed decisions concerning the way we all interact with animals and our planet.
Previous articleMaking small changes to eating routines will help to save our oceans
Next articleExploring Vegan tattoo activism