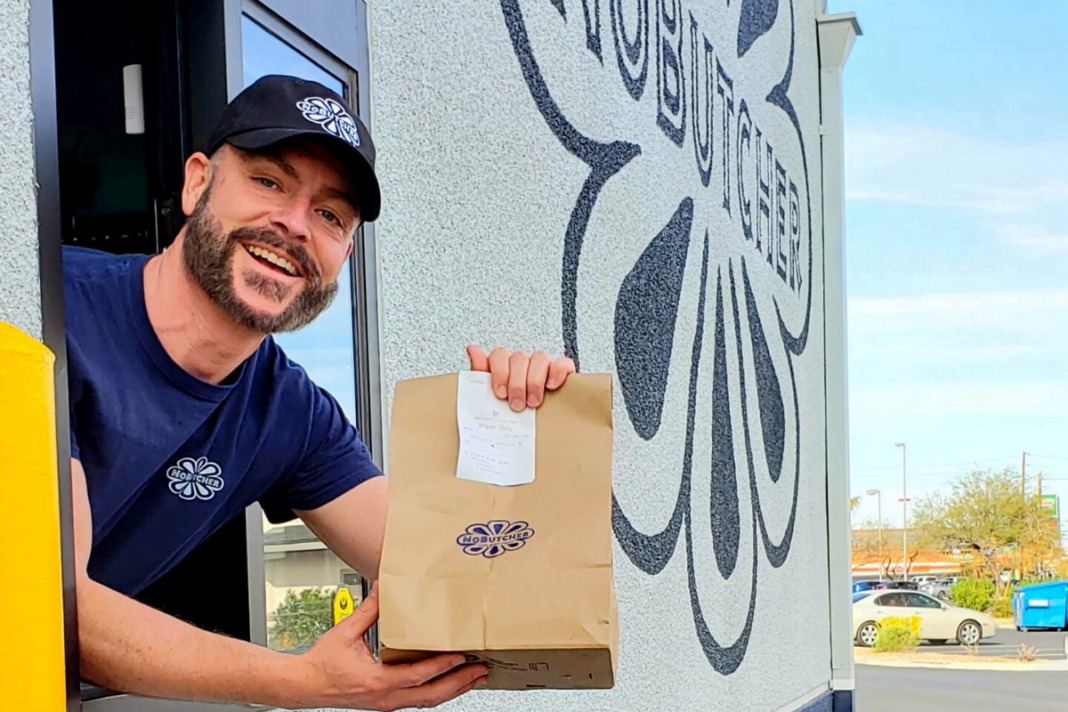 Vegans and butcheries simply don’t mix. When your values are centered on compassion to all living beings, ending animal suffering, and ultimately avoiding the needless taking of a life, a butcher is more than likely the last place you’d want to be.

But what if it’s a vegan butcher?

Yes, vegan butcher. No, not an oxymoron. It’s 2020, and vegan delicatessens are officially a thing. They have been for the past few years, in fact, when The Herbivorous Butcher first opened in Minneapolis, Minnesota. While they’re still a relatively new concept, plant-based delis are becoming more popular as more meat-free butchers pop up around the U.S., the U.K., and beyond.

NoButcher in sunny Las Vegas, Nevada is the newest of the vegan butcheries, and a special one at that. With clever branding, impeccable service, and a drive-thru(!!!), it’s truly a must-visit spot if you’re in the city of sin.

Read on for all the details!

Co-owned by Sebastian Mueller and Alecia Ghilarducci, NoButcher was a wholesale business before making its first public appearance at festivals and pop up events in early 2018. Cued by a positive public response (read: hundreds of people waiting in line), the team partnered with local vegan restaurants, supplying their vegan meats and cheeses to places like Go Vegan Cafe and No Regrets Bar. NoButcher also started with an online store and local pickup options to allow eager vegans to enjoy their homemade plant-based meats and cheeses at home, on-demand.

Sebastian and Alecia opened NoButcher’s premiere brick-and-mortar location in October 2019, solidifying their title as the first and only vegan butcher shop in Las Vegas.

Situated less than 15 minutes from the famous Las Vegas Strip, NoButcher’s locale is both a delicatessen and a sit-in eatery. Customers can come in just to stock up on their favorite veggie meats, cheeses, and sides by weight, or grab a seat in NoButcher’s cozy restaurant or out on the dog-friendly patio to enjoy the full menu and quick counter service.

The main thing that sets this plant-based spot apart? A fast and convenient drive-thru that makes it easier than ever to get your hands on quality vegan food on-the-go. Oh yes. Vegans, rejoice!

A Vegan Menu to Get Excited About

So yes, the food. It’s why you’re really here, isn’t it? The menu at NoButcher is everything you’d want and need from a plant-based deli. With menu names like “Pulled NoPork” (a fan favorite), “NoRib,” and “NoEgg,” NoButcher ensures that plant-based eaters have no doubts about the animal-free menu.

Known for their inventive takes on familiar flavors, NoButcher specializes in truly delicious, thoughtfully-crafted sandwiches that feature their vegan meats and cheeses (also available for separate purchase), and a variety of comfort food sides. At this vegan butcher, the meats and cheeses are completely free of artificial flavors, hormones, preservatives, and cholesterol.

Wondering what to get on your first visit?

Second best is the Italian Cold Cut sandwich, a ciabatta roll filled with NoPepperoni and NoTurkey with tomato, lettuce, onion, and garlic-herb cream cheese. Go for a side of NoEgg salad to complement your sandwich, and don’t forget a house-made infused lemonade to wash it down. Gluten-free eaters, fear not. NoButcher has also got you covered, as three sandwiches and most of their sides and salads are made sans gluten. 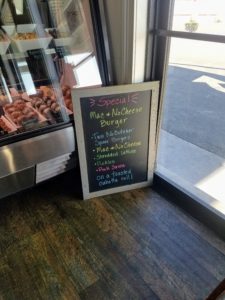 Their occasional sandwich specials are also always worth a try, which in the past have included a Philly NoCheese NoSteak, BLT Mac & Pesto, and even a Rueben Double-Decker for St. Patrick’s Day.

Made from scratch daily, the goods in NoButcher’s delicatessen include not only their popular vegan meats and cheeses, including NoRibs, NoPepperoni, the scrumptious Beer NoBacon Cheese Ball and more, but also classic sides like Potato Salad, ColeSlaw, and NoTuna Salad.

Prices are about what you’d expect for quality from-scratch deli food: fair. A combo meal—sandwich, drink, and side—will set you back almost $14, while a single sandwich comes in at around $10. Vegan meats and cheeses in the case are priced by the half-pound and up, starting at $8. The meal portions are generous for the price point, and the value is clear in every single bite.

On occasion, NoButcher offers significant discounts on select items, which they share on social media. The plant-based deli also has a loyalty card, rewarding repeat customers with a free sandwich or $10 off after 10 stamps. 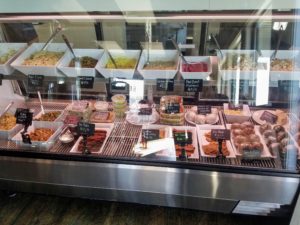 NoButcher ultimately lives by their principles, and does so extremely well. According to co-owner Sebastian, that’s “Small menu, good quality and get to know your customer.”

Nothing But Fast Service and Smiles

NoButcher is small and still growing, but their focus on community is crystal clear. When you walk in or pull up to the drive-thru window, you can expect genuine smiles and friendly conversation from Sebastian, Alecia, and team. 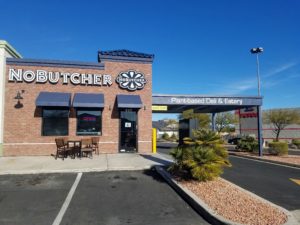 Service is surprisingly fast, despite the rising demand for their sandwiches. If they’re busy, you’ll hear gratitude for your patience from the owners, but you typically won’t have to wait too long to feast on their delicious vegan food.

NoButcher’s team is active on social media and engages with local vegan groups regularly. They even have their own “Friends of NoButcher” Facebook group. The vegan butcher has solidified its place in the vegan community, and the local response shows just how much they are loved, with 5 out of 5 stars on Yelp, Google, and Facebook. Though it’s been less than a year since NoButcher’s restaurant opened, they’ve already been asked (repeatedly) to open additional locations in other parts of the Las Vegas valley and beyond. 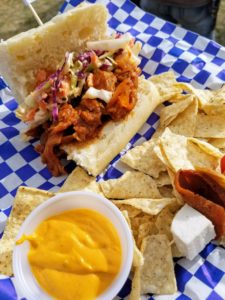 Under normal circumstances, NoButcher is open for lunch and dinner. In the time of COVID-19, however, NoButcher has adapted to continue to get vegan food to the community while running the restaurant safely.

As of May 13th, they’ve re-emerged from a hiatus as NoButcher Express, with a two-person team, drive-thru only operation, smaller menu, and reduced hours to keep things streamlined.

While the future may be uncertain, it’s clear that NoButcher doesn’t intend to throw in the towel easily. Loved by Las Vegas vegans and visitors alike, the vegan butcher has earned a solid place among more established plant-based restaurants, and for good reason.

5 out of 5 stars is not a rating lightly given, but this vegan restaurant has definitely earned it.

Next up: Are Vegan Meat Alternatives Sustainable, For The Health Of The Planet, And Us?

Safiyyah Bazemorehttps://www.safiyyah.co
Safiyyah is a freelance writer, vegan foodie, and market research strategist who calls the U.S. west coast home. Apart from writing and eating, she's wildly passionate about building vegan community by hosting local 'eatups' and by sharing her love of vegan baking with everyone that crosses her path. Safiyyah is also a yogi, herbalist, and a nomadic soul on a mission to make the world a brighter, more compassionate place.
Previous articleThe Ultimate Guide to eco-friendly dairy alternatives in 2020
Next articlePapa John’s to launch a vegan breakfast pizza