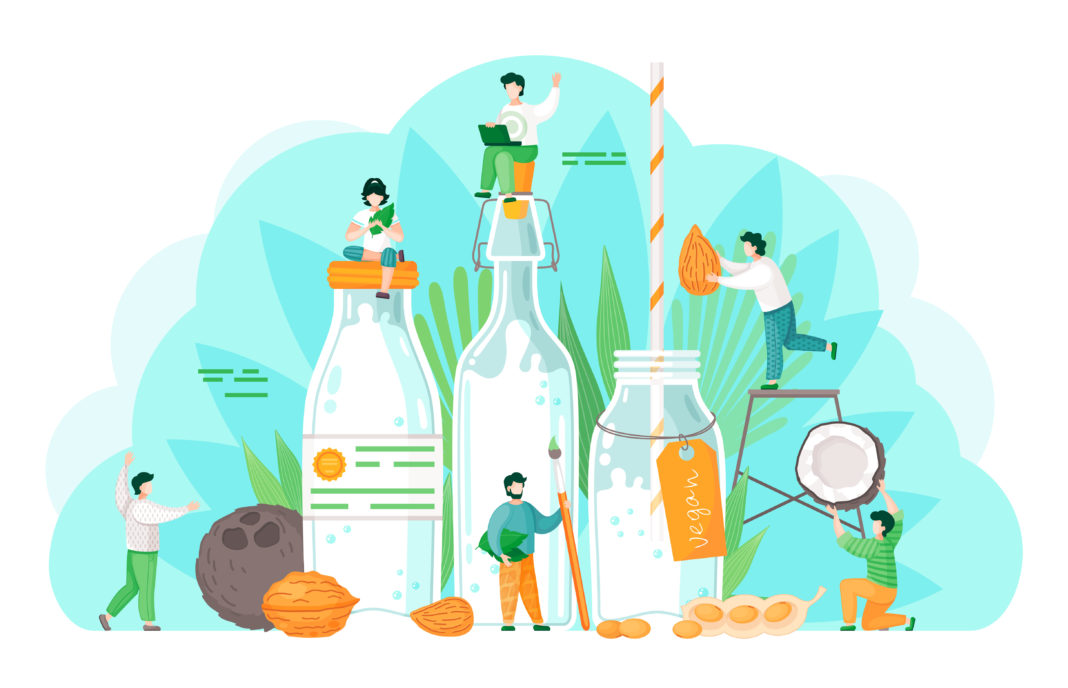 British brands are rapidly innovating with plant-based milk, with a surprising number of new launches in the last few weeks in the UK.

It seems like everyone wants to take on Oatly. The UK is seeing a slew of plant-based milk alternatives, with some brands putting their own spin on traditional alt-milks, and others coming up with base ingredients never imagined before.

It’s a market contested by both large conglomerates and local brands, each offering unique takes on alt-milk that make your grocery decisions that much more complicated.

We’re barely through the beginning of Q2 in 2021, and the UK has already seen a host of new plant-based launches. There are the standard introductions of existing alt-milks from existing companies, and then some twists and truly-unheard-of milks too. This is the list.

It’s not just about the Onion and Rosemary vegan sausages anymore. Linda McCartney’s, one of the UK’s darling meat-free brands, has now launched its own line of plant-based milks.

And it’s not the alt-milk quartet of soy, almond, oat and coconut. Well, it almost is. Linda McCartney’s range comprises a barista oat, barista coconut, soy and rice milk, all organic and topping out at six ingredients.

These were first launched in Tesco on May 12, and now are available in Sainsbury’s and Tesco stores nationwide. It’s curious that the brand chose coconut and not soy as its second barista milk, especially considering that it uses soy in both of its barista versions.

Interestingly, they all cost an even £2 — barista or not.

Read our ultimate showdown of the 12 best barista plant-based milks in the UK.

Nestlé cashes in on peas

Nestlé says it plans to disrupt the market and promises this is the closest thing to taste like milk. It chose pea protein as 61% of vegans favoured it in a blind taste test. There are three milks in Nestlé’s Wunda range: unsweetened, original and chocolate. The UK currently only has the unsweetened and original versions.

Sold in 950ml bottles for £1.90, the milks were launched in the UK on June 28 in Tesco and Co-op. The original contains 2.5% pea protein, chicory root, sugar, sunflower oil, tricalcium phosphate and natural flavours, and is fortified with vitamins B2, B12 and D.

The addition of tricalcium phosphate does two things: it adds calcium to the nutrition of the product and acts as an acidity regulator. This means that even though it isn’t marketed as one, this could be used in coffee like barista-style milks.

The Co-op is the latest British supermarket to introduce an own-brand plant-based milk. As part of its fifty-strong vegan range GRO, the Co-op has released The Oaty One. It’s the cheapest barista oat milk in the UK, at a retail price of 79p for 1 litre. The brand says this is 58% cheaper than the “leading branded oat milk”.

The Oaty One (which, if it sounds familiar, it is) is made with local oats and fortified with vitamins and minerals including B12, vitamin D and calcium. And oh, the tetra pack is fully recyclable. All the good stuff.

This launched in select Co-op and Nisa stores on July 26, two months after the retailer announced price parity between its plant-based range and conventional counterparts.

Read our ultimate showdown of the best oat milks in the UK.

New blends in town with Lilk

An interesting choice for a name there. Lilk was founded by siblings with no retail experience in the middle of the Covid-19 pandemic.

Like many, the brand swears its products are dairy-like. There are two blends in the lineup: The Common Blend and The Lush Blend.

The former is a blend of oats and rice (5%) each, with acidity regulators, stabilisers, oil, nutritional supplements and salt rounding up the list. The latter is a triple-blend of oats (10%), coconut (2% cream) and quinoa (0.1%), with similar additives and an emuslifier to make mimic the texture of whole milk and make it suitable for coffee.

While this will be listed in Ocado in September, with The Common Blend retailing for £1.80 and The Lush Blend for £1.95 for a litre, you can get your hands on this via Lilk’s website right now.

Nut milk pastes gained popularity with the US-based brand JOI. There are two factors at play — convenience and sustainability. Adding water to a paste to make nut milk is the easiest way to whip up some DIY alt-milk, but that also negates the need for straining and eliminates any waste residue.

The UK’s first-to-market nut milk, which debuted at Sainsbury’s briefly last year, is by Nooj, which makes almond and cashew nut pastes. The brand tells you how much water to add to get the consistency you’re looking for, whether that’s skimmed, semi-skimmed or whole milk, or even cream.

The almond paste has 64% almond, while the cashew paste has 61% cashews. Apart from nut milks, you can use them as binders, base sauces and thickeners. Because the ingredient lists are just nuts, water and salt, this probably won’t work as a barista milk.

It’s due to be launched in 150 Sainsbury’s stores in October at £3.50 for a 150g pouch. The brand claims each pack can make over a litre of milk.

Someone has DUG out potatoes for milk

Potato milk, you guys. Who’d have guessed it? I mean, potato protein being used for plant-based meat is a thing, so why not some milk too? And we’ve all seen those potato-based queso recipes, right?

Swedish brand Veg of Lund has launched the world’s only potato milk, called DUG. And it’s giving existing plant-based milks a real run for their money, being free from the 14 most common allergens. It’s also super sustainable, being twice as land-efficient as oats and using 56 times less water than almonds.

But don’t worry, it’s not just mashed potatoes blended with water. DUG’s range has three milks: original, unsweetened and barista. The original, sweetened version is a 1.5% milk, while the other two are 3%. And even though potatoes (9%) and water are the two most prominent ingredients, there’s pea protein and rapeseed oil complementing the texture in each of the milks.

The brand is in discussions with several retailers in the UK, but you can still buy the milks online at Navesu (£1.99 for a litre for each) or Amazon (£11 for a taster pack containing one of each).

Anay Mridul
Anay is journalism graduate from City, University of London, he was a barista for three years, and never shuts up about coffee. He's passionate about coffee, plant-based milk, cooking, eating, veganism, writing about all that, profiling people, and the Oxford Comma. Originally from India, he went vegan in 2020, after attempting (and failing) Veganuary. He believes being environmentally conscious is a basic responsibility, and veganism is the best thing you can do to battle climate change. He gets lost at Whole Foods sometimes.
Previous articleUK supermarkets to trial world’s first plastic-free, recyclable sandwich packaging
Next articleFarmers back National Food Strategy’s call to eat less meat