Not just falafel: 7 traditional Middle Eastern dishes that are vegan 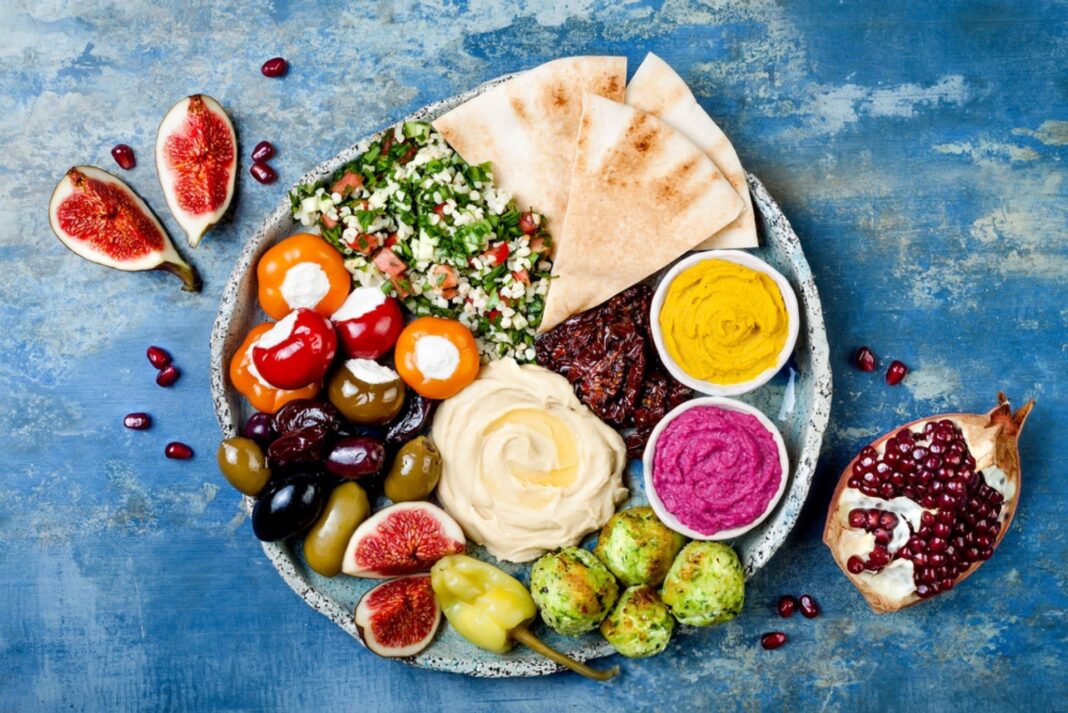 Some of the most popular traditional dishes that are consumed in the Middle East are vegan-friendly. Here are seven you should try.

The Middle East is typically known for its meat-heavy dishes and it’s quite rare to find individuals in the Arab community following a plant-based diet. However, there are plenty of traditional Middle Eastern dishes that aren’t just made up of falafel, couscous and hummus but still vegan-friendly. Here are a few for you to try out. 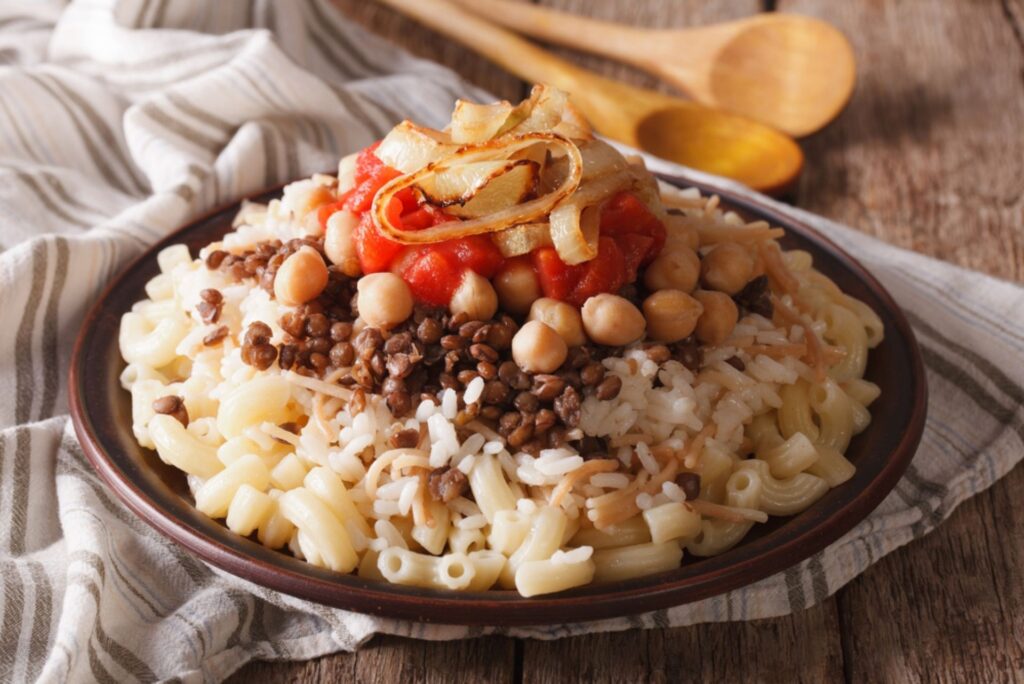 Served through the streets of Cairo, Koshari is considered Egypt’s national dish. This bowl of vegan goodness is made up of rice, lentils, pasta, chickpeas and tomato sauce combined. Although the number of foods may seem overwhelming to cook, each component is quick, easy to make and likely to be stored in your pantry already. To top it off, serve with crispy fried onions and a dash of vinegar. 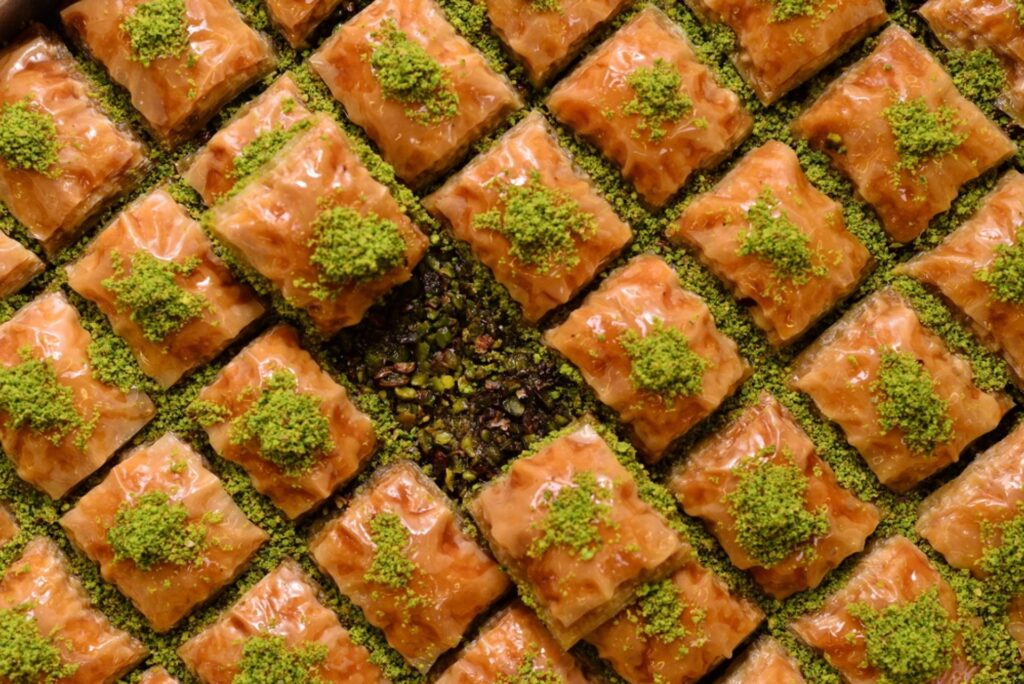 Baklava is arguably one of the Middle East’s most loved desserts, and it’s vegan. Originally from Turkey, the famous dessert became a featured classic across all Middle Eastern countries and in many places in the West as well. The preparation is ridiculously simple, and the recipe requires only three ingredients: phyllo pastry, blended pistachios and your choice of cooking oil.

Each sheet of phyllo pastry is coated with the oil and pistachios, which is then followed by another layer of pastry. Repeat the process until you’ve used up all your pastry. Once completed, lather the entire dessert in oil to retain the dessert’s moisture and then place in the oven to bake for 30 to 40 minutes. 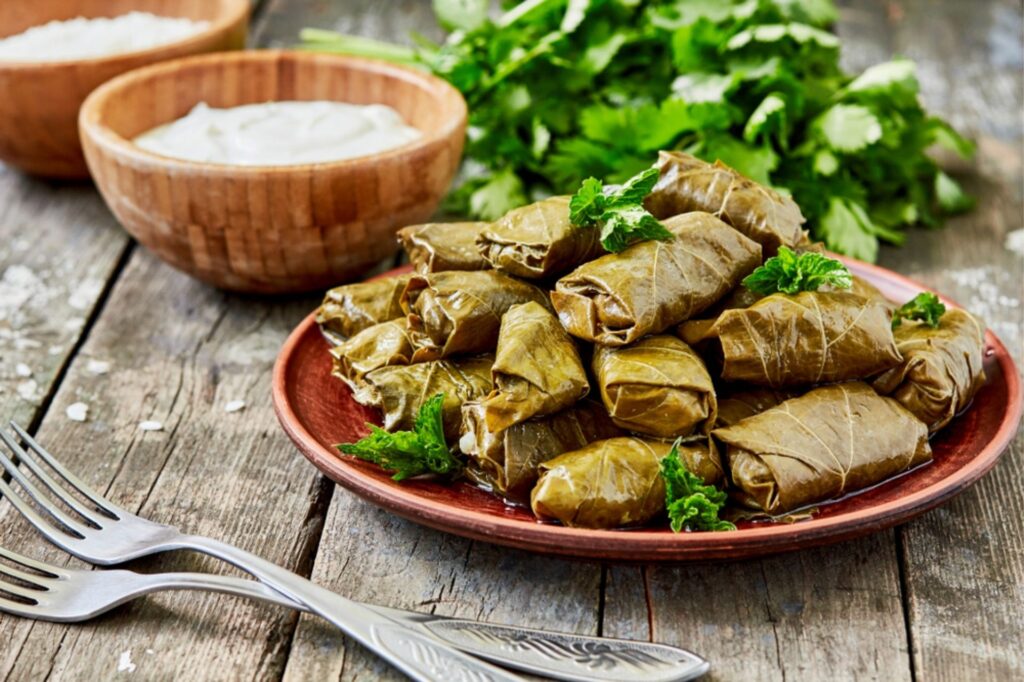 There are many variations of dolma, which are also known as stuffed vine leaves. The classic and vegan-friendly variation of this Middle Eastern dish contains rice, garlic and finely diced onions stuffed in vine leaves, which is then soaked in a lemon broth. You’ll find dolma a popular choice for appetisers across the Middle East, especially in Turkey and Egypt.

Using an individual vine leaf, begin by securely folding a tablespoon of your rice mixture. Repeat the process until you’ve reached your desired amount. Place the rolled vine leaves in a pan on medium heat and then leave to soak in lemon juice until it has all been absorbed. Once cooled, serve alongside your favourite vegan yoghurt. 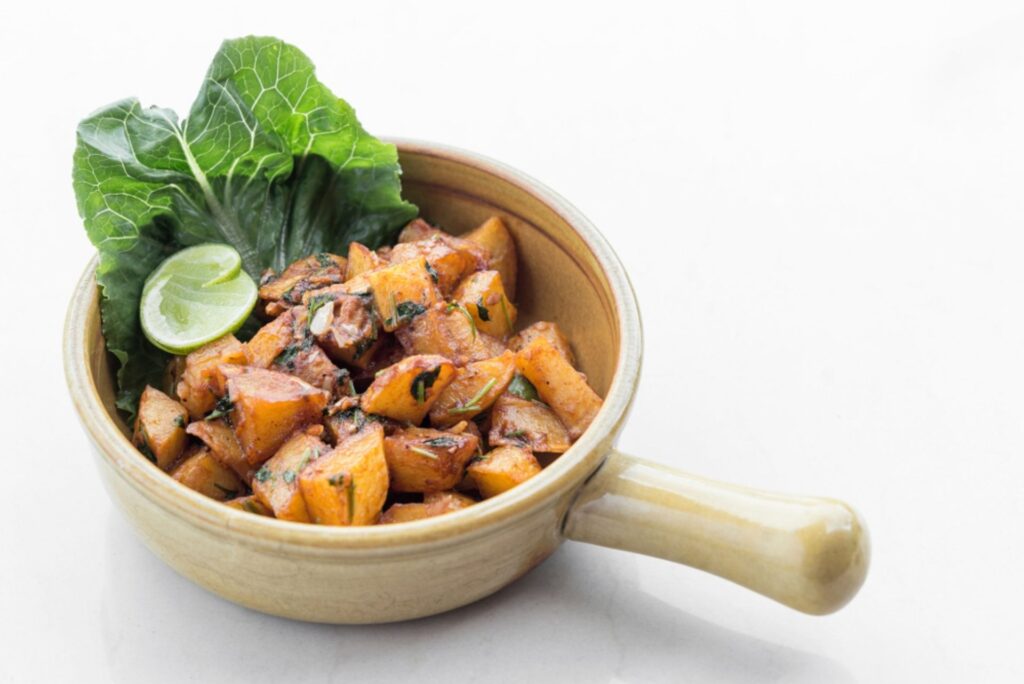 Batata harra literally translates to ‘spicy potatoes’. This dish is simply a combination of skillet potatoes, herbs and spices, if you choose to add any.

Boil your peeled potatoes until they are fully cooked and chop them into smaller chunks. Add garlic, some pepper flakes and any other herbs of your choice into a skillet and let it cook for a few minutes before adding the potatoes. Once the potatoes have been added, pour some lemon juice into the mixture. Feel free to add more herbs if you wish. Batata harra easily makes an appetising side or it can make up a part of a larger mezze dish, with hummus and salad. 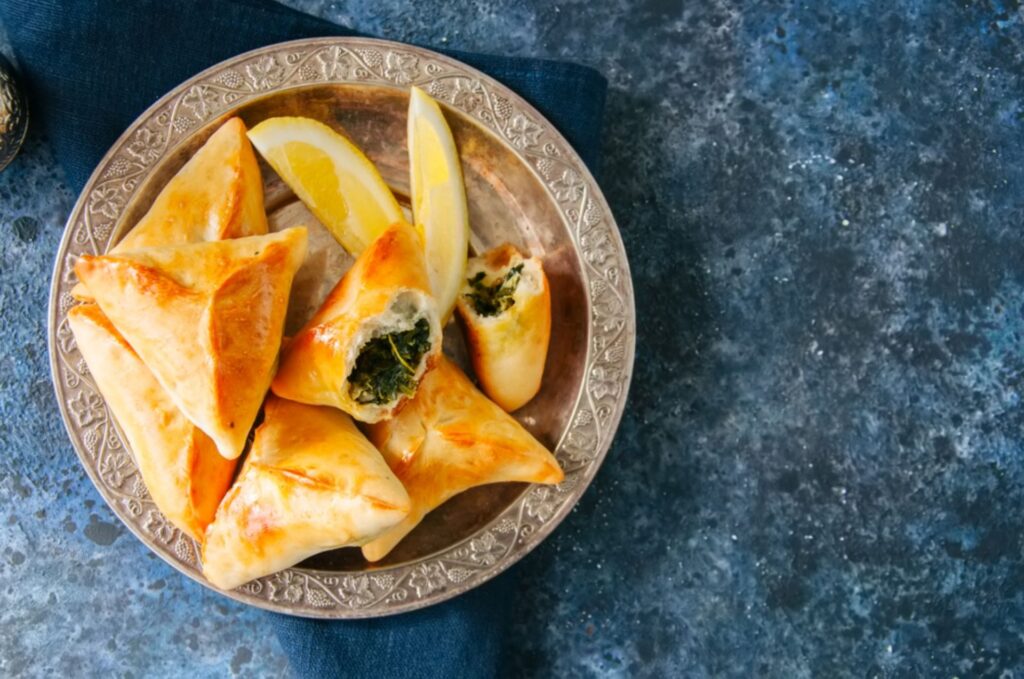 Fatayer is originally a Lebanese meat pie but can alternatively be found filled with either spinach or cheese. Begin by creating a dough mixture, using flour, sugar, yeast and warm water. Whilst you leave the dough to rise, get started on cooking your spinach filling in a pan. Feel free to add in your own spices or other vegetables too.

Once the dough has risen, you want to roll out the dough into several 4- to 5-inch circles and proceed by adding one to two tablespoons of filling in the middle. Fold over the dough at two sides, pinching them together. Finally, each pastry should look like a triangle as you pinch close the final side. Then leave to bake in your oven for 10 to 20 minutes until they appear golden brown. 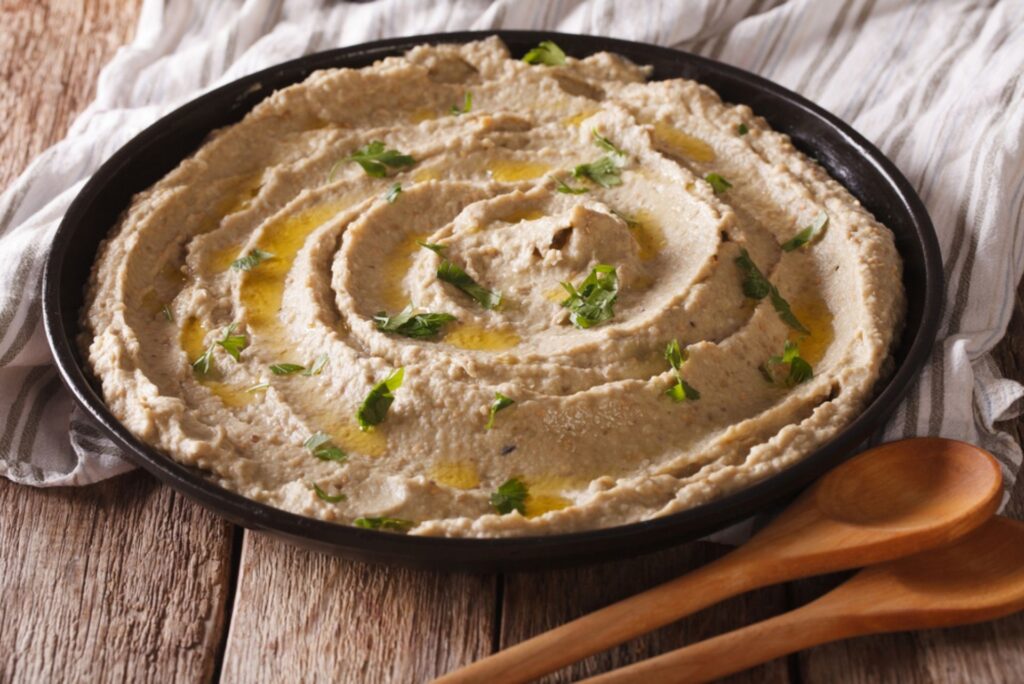 Although this dish can be easily compared to Middle Eastern vegan staple, hummus, baba ganoush is arguably far creamier. Its smooth texture and smoky taste are attributed to the rich mixture of tahini, aubergine, garlic, lemon juice and olive oil. You simply roast the aubergine and leave it to cool down once it’s done.

For a smokier taste, try roasting the aubergine over an open flame. Prepare your bowl of tahini and add your roasted aubergines and the remaining ingredients. Mix well until you find the ingredients are evenly distributed in the paste and there are no stringy parts of aubergine left. Drizzle some olive oil over it and serve with pitta bread, carrot sticks or any other snack of your choice. 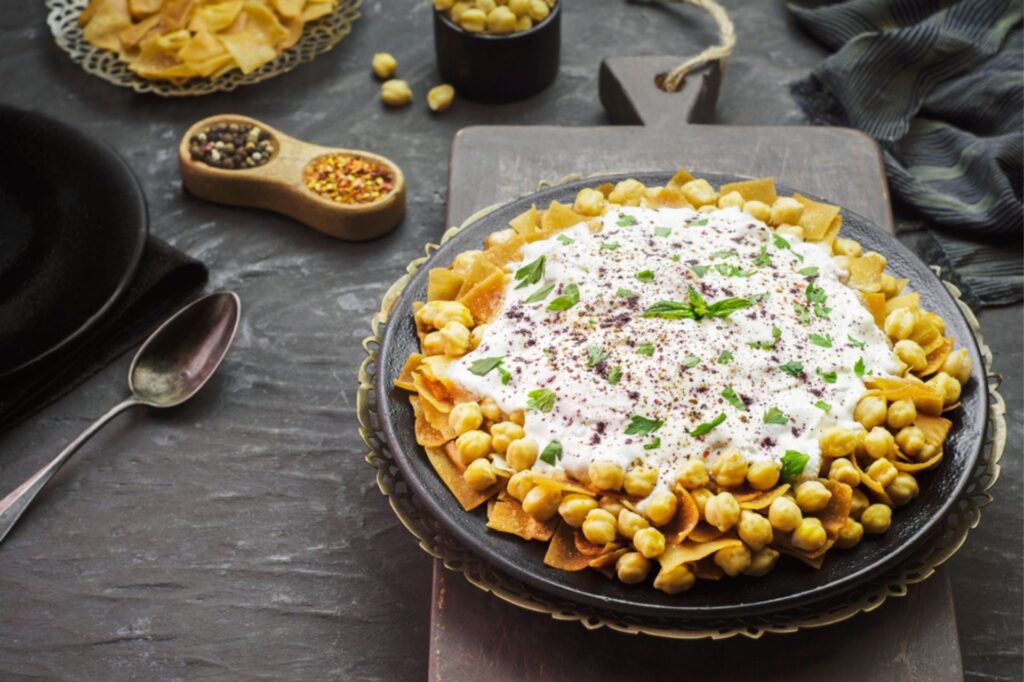 Fatteh is the perfect dish for a quick and light breakfast or snack. This dish is a combination of sliced fried pitta and warm chickpeas all coated with your favourite plain vegan yoghurt sauce. It is very commonly served in Lebanon, Egypt and Palestine.

The yoghurt sauce can be made easily by mixing in the vegan yoghurt with lemon juice, garlic and a tahini paste. Cut up your pitta bread into small pieces and fry them until they turn a golden-brown colour. The chickpeas should be simmered over medium heat until all the water has been fully absorbed. Make sure your fried pitta slices are evenly distributed alongside the chickpeas and then top it off with the tangy vegan yoghurt sauce and some pine nuts.