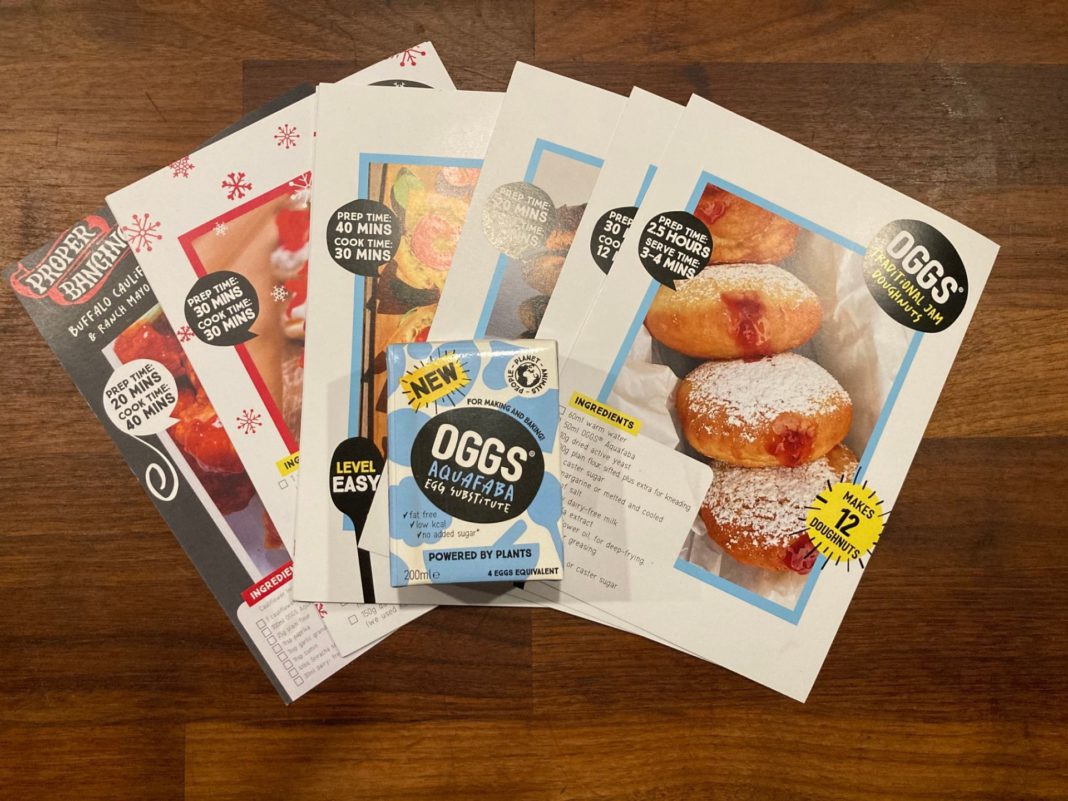 A new kid on the block that promises to mimic the binding properties of eggs but with none of the ethical quandaries, OGGS Aquafaba surprised from the very start.

OGGS has been delighting UK shoppers for a fair while now, with its range of fairy cakes and sweet treats that sit next to good old non-vegan Mr Kipling on supermarket shelves and now, it’s making home baking even easier. Apparently.

We tested the aquafaba, which comes in 200ml cartons, using a few recipe cards supplied by OGGS itself. There were some nice easy options, such as chocolate brownies, cookies and mayo, but I decided to go all-out and try something really taxing. A recipe that has never quite turned out correctly for me before: the dreaded fluffy jam doughnut.

Here’s our review of the OGGS Aquafaba. 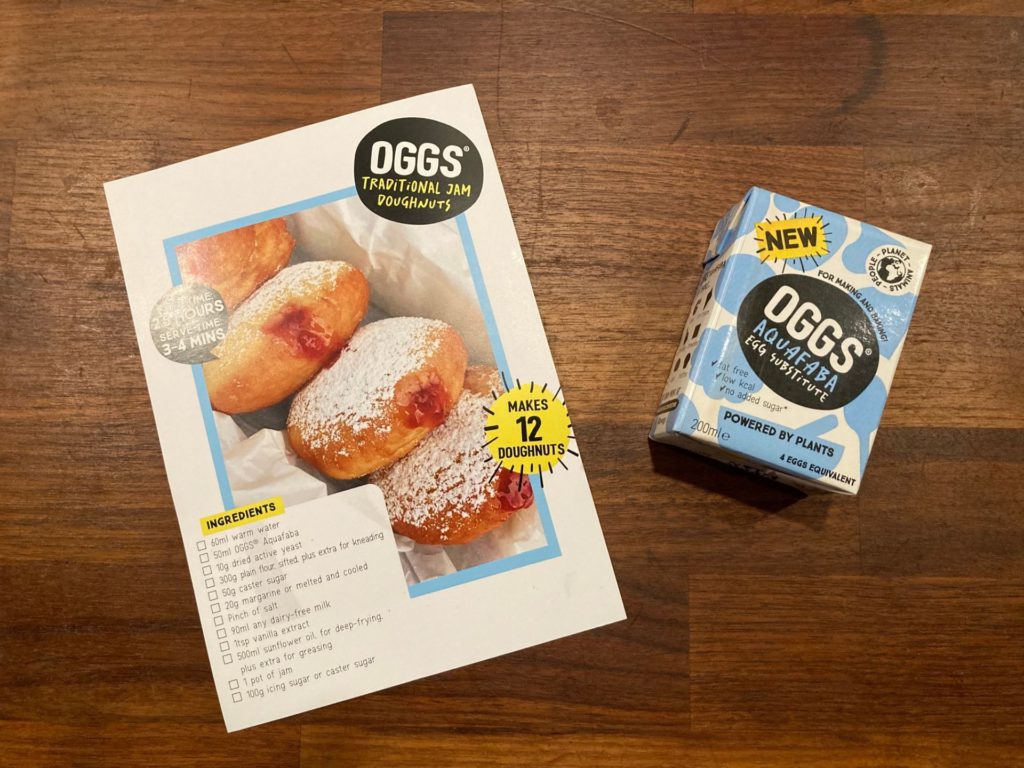 The first thing I really noticed was how brown the liquid was. It didn’t smell of chickpeas though, which cannot be said for previous homemade aquafaba. It was fairly thick and viscous and would clearly froth up easily, were I to need to beat it, which I didn’t for the doughnuts.

I followed the supplied recipe card to the letter, producing a very wet and sticky dough that, frankly, caused concern. Not shy of a little kitchen experimentation, I added some extra flour, just to add some structure and that seemed to work well, as, after the first proof, the dough was huge, fluffy and silky smooth.

I proofed a second time, with the doughnuts now individually shaped and then held my breath as I fried, filled and tasted. 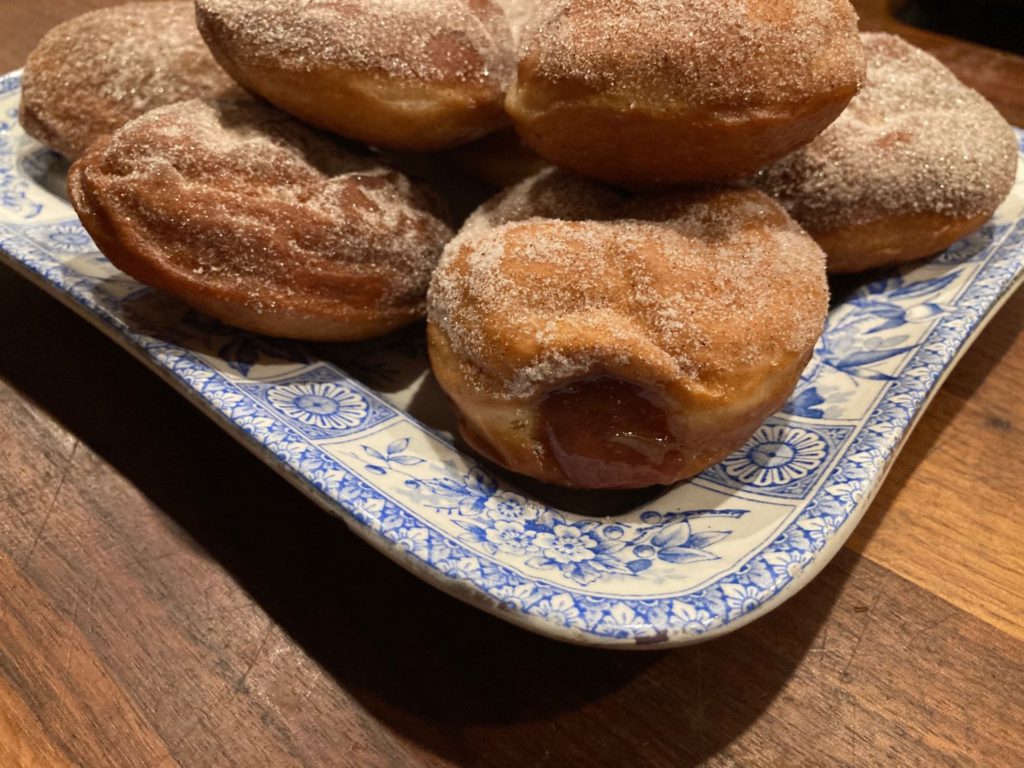 I don’t want to toot my own horns but my kitchen sounded like the brass section of the BBC concert orchestra. Horn-tooting aplenty because these were artisan shop quality doughnuts. Yes, I took the extra time to make a strawberry and rhubarb jam for the filling, but the doughnuts themselves were exceptional. Light, fluffy and with the perfect amount of chew, I could easily have given Morrisons a run for its money as the favourite vegan bakery.

All 12 doughnuts were eaten in one sitting.

Where are the pictures, you ask? Well, as the brownies were cooling, certain members of the household decided to sneak into the kitchen and eat big chunks straight from the pan, before any pretty photos could be taken, so apologies, you’ll have to just imagine them.

Again, the OGGS Aquafaba performed above and beyond here. Instead of crumbly, dry or overly potato-y brownies (who hasn’t had a sweet potato incident at least once?), I was treated to thick, gooey hunks of chocolate goodness. They just about held together but had a decadent soft centre that threatened collapse at any moment, prompting fast scoffing. No complaints about that though.

Thanks to the tasteless finish of the aquafaba, there was no suspicious aftertaste or lingering weird notes. No bean vibe here and definitely no sense of any chickpeas. These might be the best brownies I’ve ever baked and gave rise to plans for a rocky road recipe in the near future too. 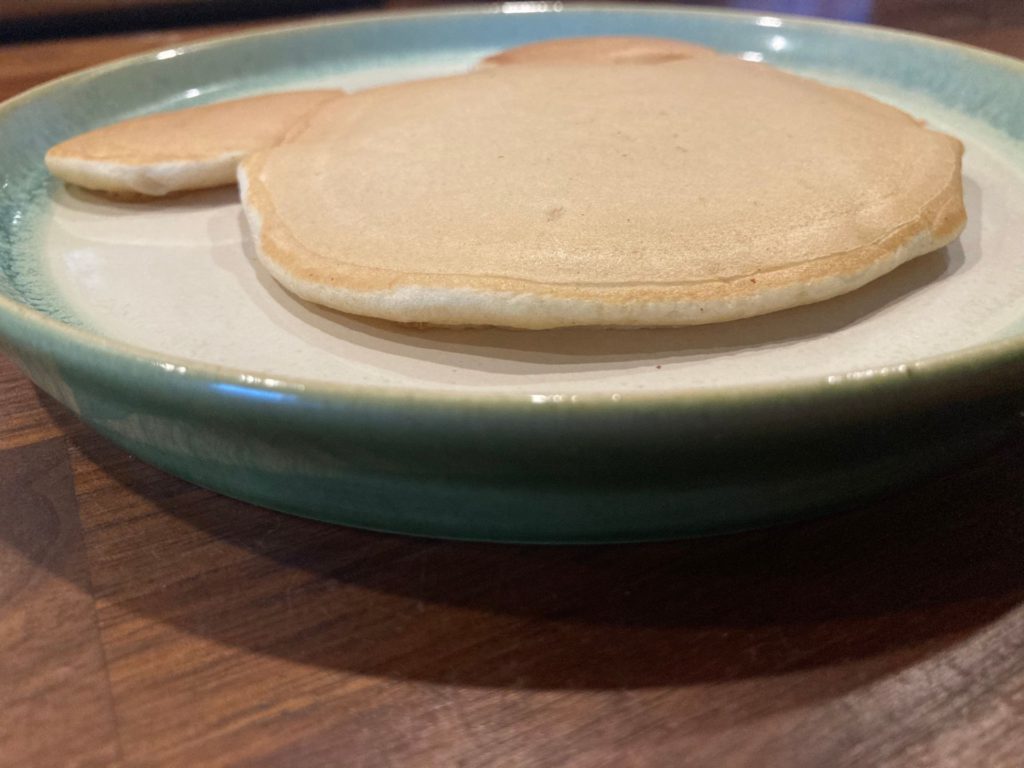 Well, not everything can be a winner and the third and final recipe I tried proved to be the poop in the pickle jar.

We are an American pancake family, with weekend mornings being filled with thick, fluffy stacks flying from Aga to plate. I have a recipe I normally use but was super excited to be able to skip the laborious faux buttermilk making stage. Alas, the results were not great for us.

The batter, once left to rest for 30 minutes in the fridge, is very thick and takes longer to cook to a golden brown. It also stays stodgy instead of getting light and fluffy. Such a shame, as the doughnuts were like chewing on clouds. These were more like wads of kitchen roll and it made no difference if we used less batter or adjusted cooking times. Not a winner and the pictures are a good indicator of my disappointment.

Getting top marks in two of the three recipes we tried, the aquafaba has proven itself to be a good baking essential, and I’m willing to say that I’d buy it again. There are a host of other recipe cards we’d still like to try and there are birthdays on the horizon that could use good sponge cakes, which I feel sure this will produce.

Most intriguing is a recipe supplied for faux mini quiches. This is not what I’d call a traditional egg substitute, as it certainly wouldn’t make a good scramble, but having looked at the method, I think it actually will work well for small bite-size items that need an egg-like consistency.

The OGGS Aquafaba is available in 200ml cartons, which is the equivalent of four eggs for baking purposes. It costs £2.00, making it 50p an egg, though this seems to have become something of the norm for vegan alternatives, as the Crackd liquid worked out to be the same.

OGGS Aquafaba is available either directly from OGGS, or from Waitrose, Sainsbury’s and Asda, as well as smaller retailers.

Amy Buxton
Amy is a committed ethical vegan, raising a next generation compassionate human with her husband and their beloved dog, Boo. A freelance writer with a background in PR, she decided to use the COVID lockdown period to refocus her client base and has come to The Vegan Review as a senior writer and editor, before moving into her external content director role. "What we should be doing is working at the job of life itself" is Amy's mantra, courtesy of Tom from The Good Life.
Previous articleIs palm oil vegan or simply an environmentalist’s nightmare?
Next articleThe big debate: Is secondhand clothing vegan-exempt?