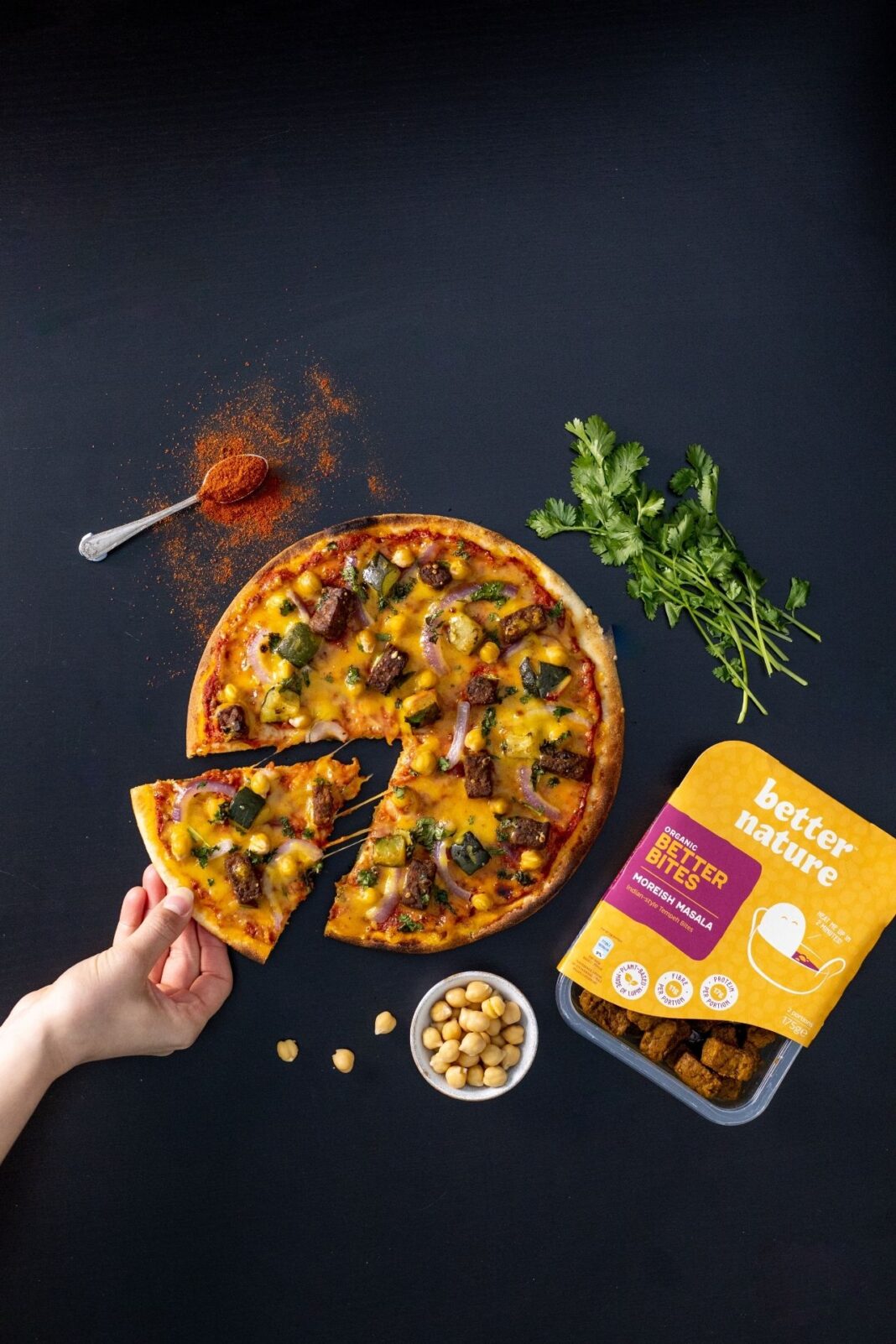 Vegan brands One Planet Pizza and Better Nature are collaborating to launch the world’s first frozen pizza with tempeh today.

One Planet Pizza is the UK’s first vegan frozen pizza company, and together with Better Nature, the UK-based tempeh brand, they’re selling 500 pizzas, available until stock lasts, on the former’s website, at £23.80 for four pizzas or £25.80 for five.

The name of the pizza, Masala Tempehtation, was chosen after an Instagram competition, which had over 150 entries. One Planet’s crust is topped with Better Nature’s Moreish Masala Better Bites, a Masala sauce, red onions, green peppers, coriander, chickpeas, and Applewood’s smoky vegan cheese.

Tempeh is a popular vegan food that originates from Indonesia. It’s full of protein, fibre and a range of micronutrients including iron and calcium. While tofu — the other favourite vegan soy-based product — is made by coagulating soy milk, tempeh is traditionally made by fermenting cooked soybeans into a dense block.

But it can be made from other legumes, nuts, grains or seeds. Better Nature’s Masala Better Bites are made from lupin beans, a protein-rich legume found in Germany and Australia.

Better Nature co-founder Elin Roberts said: “We’re so excited to be collaborating with One Planet Pizza. Their products really help people reimagine the food they can enjoy on a vegan diet, making ethical eating more accessible to the masses.”

Recalling how difficult it used to be to find vegan pizzas in restaurants, even without the cheese, she added: “To now be able to pick up a frozen one in-store or online to enjoy in the comfort of your own home is very exciting for our industry. Making plant-based alternatives in more accessible formats is key if we’re going to change consumer eating habits for a more sustainable future. To see our tasty tempeh help lead the way in that change is a really inspiring moment for us all at Better Nature.”

Joe Hill, One Planet’s co-founder, said the collaboration is only natural. “Two purpose-driven plant-based brands coming together to create something unique, doughy and tempeh-ting. When we chose to create a Masala-spiced pizza, we wanted to ensure that the cultural history of the Masala sauce was highlighted.

“We reached out to Analida from Ethnic Spoon — a passionate advocate and educator of culinary cultural history — who was able to educate us about the fascinating history of the Masala Sauce, which we will be sharing on our social media channels. This limited-edition flavour is the first of its kind and we’re looking forward to hearing people’s reviews.”

Anay Mridul
Anay is journalism graduate from City, University of London, he was a barista for three years, and never shuts up about coffee. He's passionate about coffee, plant-based milk, cooking, eating, veganism, writing about all that, profiling people, and the Oxford Comma. Originally from India, he went vegan in 2020, after attempting (and failing) Veganuary. He believes being environmentally conscious is a basic responsibility, and veganism is the best thing you can do to battle climate change. He gets lost at Whole Foods sometimes.
Previous articleHow does veganism affect periods and the menstrual cycle?
Next articleThe media is underreporting the link between factory farming and climate change