Is Palm Oil Bad? The Consequences On Wildlife And The Environment 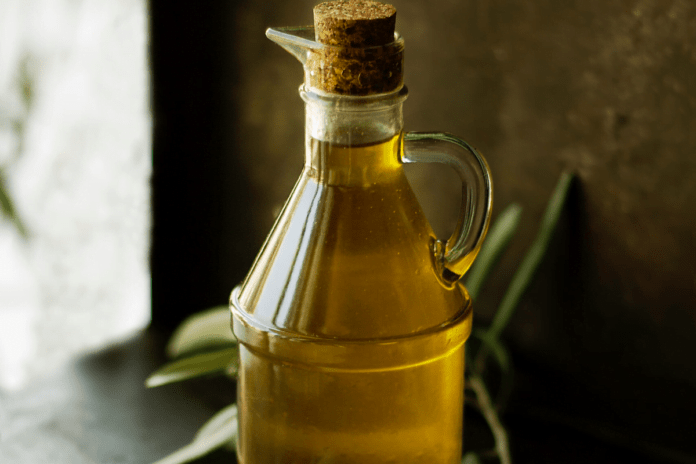 With more and more people turning vegan for animal wellbeing and the climate, questions concerning the planet’s palm plantations are on the rise.

Although palm oil is a plant crop, with no animal origins, the method used to obtain it can be against vegan morals. Palm oil production causes immense ecosystem loss and has endangered thousands of animals. If veganism means committing to a cruelty-free lifestyle, should we stop consuming or at least try to lessen the demand for palm oil?

What is palm oil?

A vegetable oil used in food, fuel and cosmetics. Actually, it is added to a staggering number of products, including plenty of surprising ones and because of the vast application potential, is contributing to climate change in a big way. It can be hidden under a variety of different names: 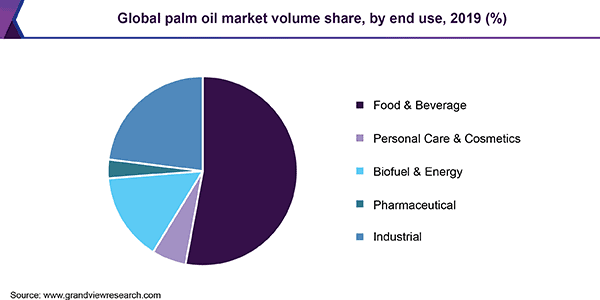 The food and drink industry is the main contributor to this demand. Reports show the ingredient is used in nearly 50% of all consumer products sold daily, particularly processed foods: a consequence of its ubiquitous properties and economical pricing and benefitting only the palm oil producers.

While much of the product’s demand comes from Southeast Asia, the United States and the European Union alone account for 14% of palm oil consumption. This growth in demand is taking a toll on many aspects of life in west Africa, Indonesia and malaysia, where the largest oil palm plantations can be found.

Mike Duckworth, founder of organic nut butter start-up, Nutcessity, doesn’t believe “committed vegans” like him should consider palm oil an “acceptable ingredient to buy into” due to the impact on already endangered species.

He says the argument used for honeybees – forced to work harder to make a living, yet losing their natural environment – could be used for animals like orangutans.

The WWF states clearing lands for plant expansion results in habitat loss, and threatens the existence of multiple species.

The islands of Sumatra and Borneo are home to Earth’s only orangutans, and the highest production of palm oil in the world.

After witnessing firsthand the “devastation” of their habitat, some “starving, injured or dead”, conservationist Michelle Desilets set up Orangutan Land Trust, to enable sustainable solutions for the long-term survival of orangutans.

But if we don’t act fast, the next 75 years could see the Sumatran orangutan population decline by over 80%. And in less than thirty years, Sumatran elephants could face extinction. They are not alone; deforestation is making tigers, rhinos, sun bears, slow lorises, pangolins, and various types of birds, monkeys and reptiles completely vulnerable to poaching too.

Wildlife is not the only indirect target of palm oil production.

Clearing forests and peatlands for plantations is accelerating climate change.

Fires, an unethical but common way to make space, are also contributing to emissions. WWF states: “The amount of greenhouse gases emitted during the 2015 Indonesian fires was almost equal to Indonesia’s emissions for the whole year.”

While the IISD says other sources may be worse for the environment, many companies don’t consider the impact palm oil cultivation has on the planet. Duckworth worries company executives accept this “for the sake of profit”, and that it’s up to us, the “investors, customers and government [to] take a stance against this”.

She says there is nothing wrong with using the ingredient for economical purposes, as fundamentally “most companies are out to make a profit”. However, Halo Eats consciously decided to avoid palm oil containing nut butters, “both for the orangutans and because there isn’t a reason to include it”.

Duckworth also doesn’t feel the need to use palm oil. With no flavour and no obvious nutritional benefits, he doesn’t feel the ingredient would enhance his Nutcessity butters. The start-up uses toasted coconut, which binds the recipe together just as well.

Educating consumers will force businesses to change their ways. Duckworth adds: “If everyone boycotted palm oil, then things would change very quickly; companies like Colgate would be forced to change their ingredients lists.”

Palm oil is not only versatile, but its yields surpass any other source on the planet.

The IISD states that compared to soya. The second most consumed vegetable oil, palm oil requires one-seventh of the fertiliser, one-fourteenth of the pesticides. And one-sixth of the energy, for the same end volume. 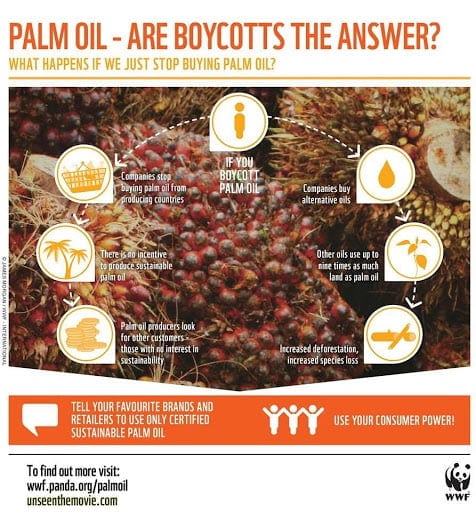 Furthermore, we would need between five and eight times the land being used now. But more land requirement means raising the risks to the tropical forest and its inhabitants. 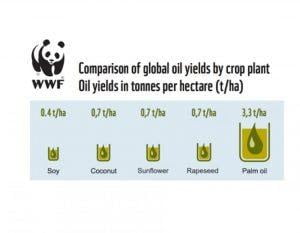 The industry also provides jobs for countless individuals in lesser-developed countries like Indonesia and Malaysia. With 80% of the world’s oil palms cultivated there, the industry currently employs over 3 million farmers. Desilets says it would be unfair to simply stop production altogether. 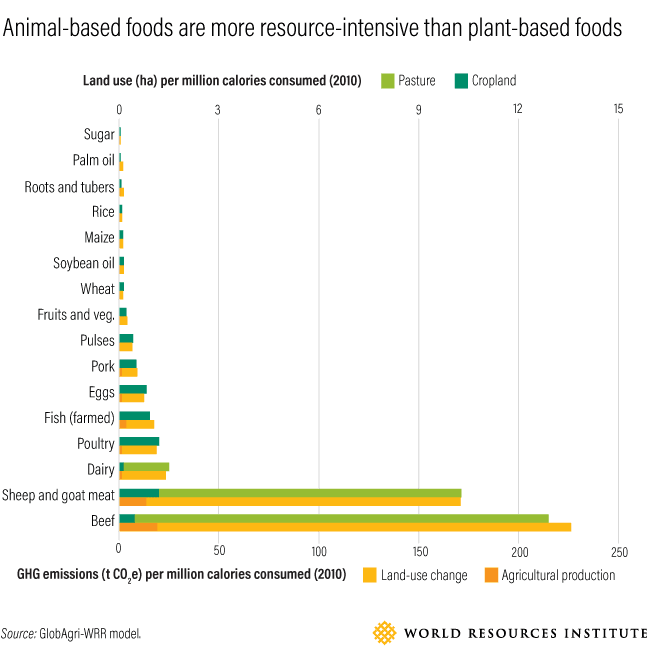 In 2016, IISD recorded 17.4% of all palm oil production adopted voluntary sustainability standards (VSS). A decade ago, they were non-existent.

One form of VSS is the WWF scorecard, which currently analyses 173 companies. The scorecard’s principle aims are: to ensure companies’ supply chains are sustainable. And they support sustainability beyond their own supply chain.

Today, 58% of the 9 million tonnes of palm oil under their analysis is now certified. While they are yet to have someone score full marks. Nutella manufacturer Ferrero leads the board with 19 out of 22.

It is committed to 100% RSPO certified sustainable palm oil, and has been achieving this target since January 2015. The company has been leading the way for CSPO, additionally joining the charterer of responsible palm oil, Palm Oil Innovation Group.

By segregating its sustainable oil from the rest of the industry, it is able to track its supply chain effectively, maintaining transparency.

To achieve VSS-compliancy, more transparency throughout the industry needed. WWF worry without formal declaration of their actions, they cannot know whether companies are VSS-compliant. This year, “a quarter of the companies did not engage with [them] to provide information for the scorecard”.

Nonetheless, Desilets asserts not-for-profits like the RSPO are “an absolutely essential platform for transformation of the industry”.

These processes could encouraged through campaigns, training programs, or lowering compliance expenses. This is especially necessary in lower-developed countries, where resources are scarcer.

How can we obtain certainty?

Greenwashing, when an organisation fuels its environmental marketing more than actually lowering its impact on the environment, is often used to mislead customers. This is a consequence of the rising trend in climate action, which is increasingly reflected in marketing.

The Environmental Investigation Agency (EIA) reported nine instances of malpractice on behalf of the RSPO, stating: “In far too many instances, auditors are greenwashing unsustainable practices and even environmental crimes.”

The RSPO wants to change this.

No deforestation, no new planting on peatlands, and no fire are three of their seven criteria. “[Our] standards are considered to be the strictest regarding deforestation,” says Fay Richards, RSPO’s global communications manager.

Larrea states the “updated version” of RSPO’s standard is “more robust” and. Is proving to have a more effective environmental mitigation than previous times.

To achieve transparency, they use tools like GeoRSPO, an interactive mapping platform displaying the concession maps of all growers. Richards says the public uses this to monitor members’ accountability, as well as identifying any instance of deforestation or fires.

When a member breaks a principle, they face formal warnings or suspension of their certification certificate.

In more serious instances, the company faces sanctions or cancellation of its membership. The problem with this, Richards explains. Is that “they will not governed by any of RSPO’s rules, and simply continue their activities”.

Despite commitments, Larrea says, “progress remains slow”, with “slightly more than 1% of palm oil sourced”. In countries like India and China being VSS-compliant. She says: “RSPO and other voluntary sustainability standards can only be part of the solution.”

Demanding change is up to us too. Our consumer pressure has “a knock-on effect all the way up the supply chain”, says Desilets. Desilets explains there is already evidence of this: “In Kalimantan, this kind of cooperation has resulted in a sharp decline in the number of orangutans in need of rescue.”