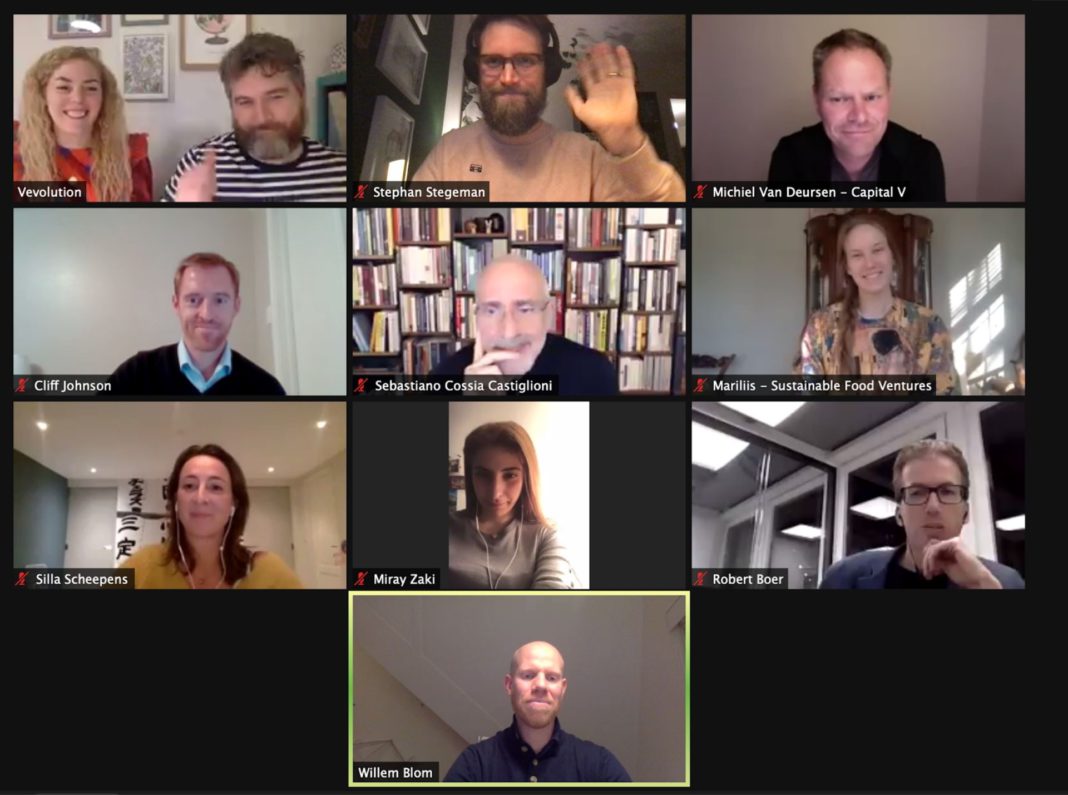 A record-breaking six startups gained interest from a panel of investors at last night’s finals of Vevoluton’s Pitch & Plant 2020.

Vevolution has announced the winner of Pitch & Plant 2020, which resulted in an unexpected six startups gaining interest from investors.

The plant- and cell-based pitch competition had nine finalists from six countries. While it was expected that one startup would have potential investment at the end, a record-breaking six competitors secured interest from the investor lineup, which included Veg Capital, Capital V and Blue Horizon.

Mumbai-based EVO Foods garnered interest from Blue Horizon, S2 Capital, Capital V, Plantbase and Veg Capital for its egg replacement product. It was seeking round funding to focus on direct-to-consumer as well as business-to-business expansion in India next year.

The event saw two UK startups secure potential investment. Frozenly, the vegan frozen delivery service hoping to build an Amazon-like ethical platform for small businesses, had interest from three firms. The other UK brand was Biff’s Kitchen, which captured the interest of two investors. It’s the largest plant-based delivery operation in Europe, stocked in 1,000 locations in the UK.

Read our exclusive story exploring the origins of Frozenly.

Cell-based brand BifTek was the fifth startup that investors wanted to continue conversations with. The band believes 10% of the meat market will belong to cultured meat by 2030.

Finally, San Francisco-based MeliBio also saw investment potential from the panel. The startup is making vegan honey using microbial fermentation, eliminating the need for bees. It hopes to be the leader of the future sweetener industry.

These six startups that secured interest from investors were part of an original 350 who participated. They will continue their conversations with the investors who expressed interest in them and move onto the due diligence stage of the process.

Find out how MeliBio is making vegan honey without bees in our interview with founder Darko Mandich.

This was the first global and digital Pitch & Plant competition. “The pandemic had a huge impact on Vevolution, as previously, our business was primarily an events and content media company. Pitch & Plant was an initiative we started back in 2017 and making it a global competition fit with Vevolution pivoting into a global platform for startups and investors to come together,” said Vevolution co-founder Damien Clarkson. “It meant we were able to bring the brightest startups in the world together for this opportunity.”

He added that the 2020 event showed technology is at the forefront of driving the systematic change of the global food system. “Next year, we hope to play a role in helping all the great emerging startups in the space find mission aligned investment partners.”

Anay Mridul
Anay is journalism graduate from City, University of London, he was a barista for three years, and never shuts up about coffee. He's passionate about coffee, plant-based milk, cooking, eating, veganism, writing about all that, profiling people, and the Oxford Comma. Originally from India, he went vegan in 2020, after attempting (and failing) Veganuary. He believes being environmentally conscious is a basic responsibility, and veganism is the best thing you can do to battle climate change. He gets lost at Whole Foods sometimes.
Previous articleMy friend asked if I make Christmas carols vegan — so I did
Next articleMeliBio’s Darko Mandich: ‘Honey bees are lazy, average and specific’