Plant-based business pioneer Loui Blake: ‘Everything I do now, I’d do for free’ 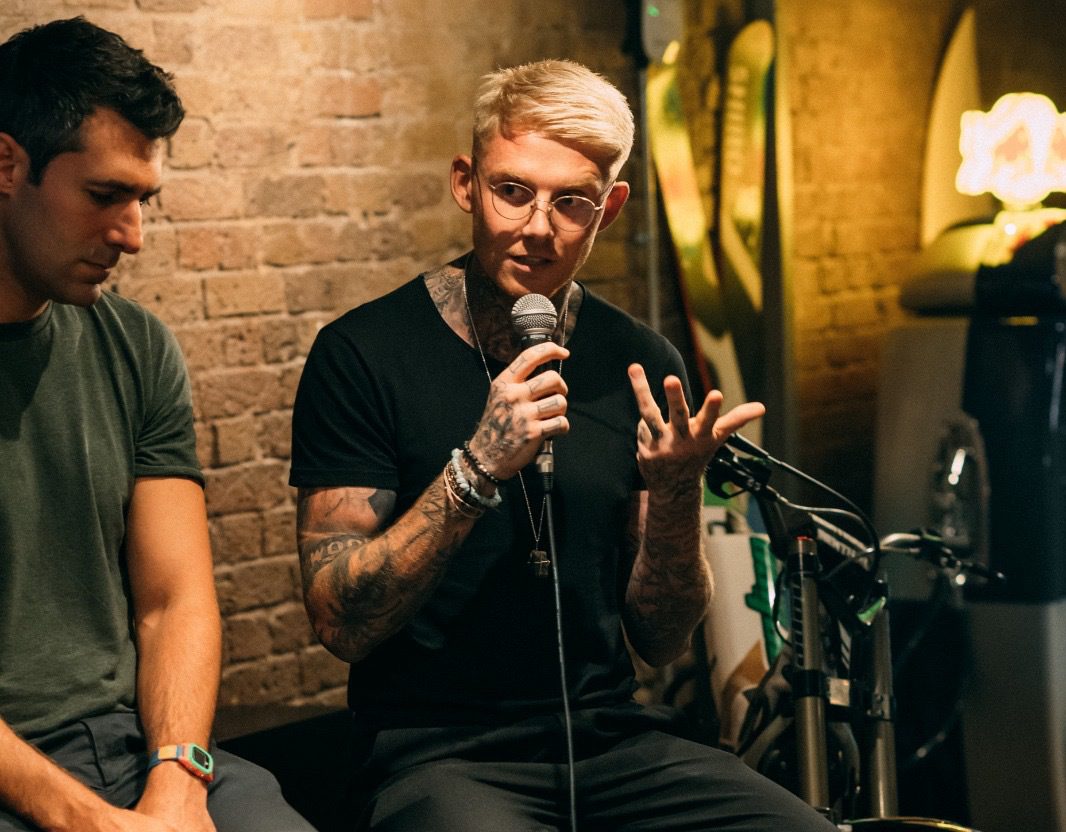 Loui Blake, the Norwich-born and London-bred entrepreneur, on his vegan restaurant empire, the importance of marketing and the magic of sprouting.

“I was burned out, with chronic fatigue, and off work for a month,” recalls Loui Blake. “I was scrolling through the depths of YouTube when I first stumbled across a video talking about plant-based diets.”

The entrepreneur, marketing expert and angel investor went plant-based for a month after that. Witnessing immediate health results, he found it impossible to go back. While he has received the odd question about his protein levels, the general reaction to his transition was quite neutral.

“When I told people, as much as they thought it was weird, they equally thought: ‘Oh, it’s Loui, he does that kind of thing,’” he says. “I’ve always been a little odd.”

In 2019, Blake won the 2019 European RMI Future Marketing Leader of the Year, topping the 30 under 30 list. But it wasn’t an easy road up. He didn’t take any investment until he was 28. “When you’re unproven, you don’t have a track record, and you’re young, nobody wants to give you money,” he explains. “So I did it all for free.” 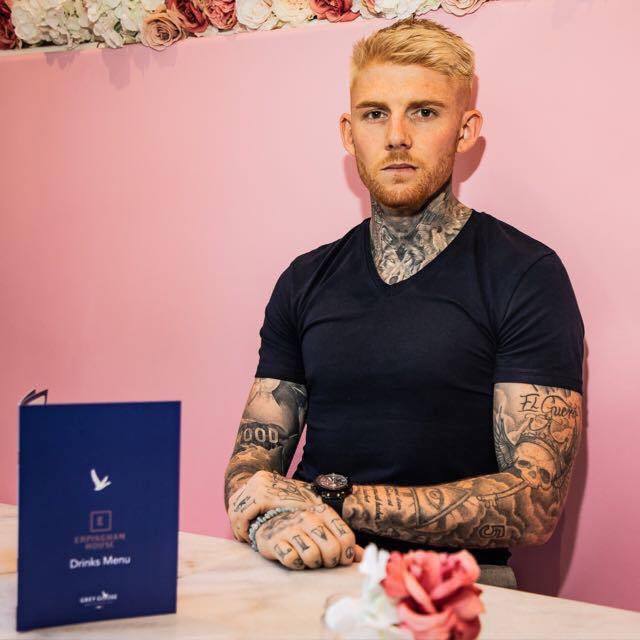 Future Football Elite academy was Blake’s first business. But to get into coaching, he spent a year working 10 to 15 hours a week for free. He says the connections, experience and skills he made there were what earned him the job of his dreams. “If you can’t get a job, do it for free. If you don’t want to do it for free, you don’t want it enough,” Blake says.

As well as running businesses and investing in others, Blake has a huge passion for boxing, running and football. Co-founding the Future Football Elite was the first time his two worlds collided. This year, he hopes to go one step further with The Arena: an 18,000 sq ft warehouse with football pitches, a boxing gym and a plant-based cafe. Blake has been envisioning this project since the age of 16.

It came after Blake realised how much young people were missing out on a space to practice sports inside in Norwich, a city that sees rain at least six months a year. From inside The Arena’s office, Blake is beaming with excitement. The building should be finished by April, and the entrepreneur hopes children will be able to use it right away. “It’s having a huge negative impact on their mental and physical health, so we hope we can get them in to train and play as soon as possible.”

“In an average year, I’ll probably cook about 10 days in total,” Blake says, laughing. “But with the pandemic, it’s been everyday, and I love that.” Working in the food industry means the entrepreneur was constantly going out to eat at competitors’ restaurants, and to discover what new things could be brought to his tables.

His first restaurant was Erpingham House, launched in the heart of Norwich in 2018. This was followed by Kalifornia Kitchen in London in 2019, Vegan Dough Co. and another Erpingham House in Brighton in 2020. On top of that, Blake is a partner at by CHLOE. and owns a remarkable portfolio of investments in businesses such as Club Cultured and The Pack. This vast amount of experience has made him more understanding of the hospitality industry.

Read our story on how Norwich became a vegan hotspot.

On a trip to Amsterdam a couple of years ago, the entrepreneur was accidentally served a dairy latte, which he says must have gotten “lost in translation”. But he says there’s always going to be things in life outside of your control. While he’d never put animal products into his body knowingly, mistakes happen. To avoid any cross-contamination at all, the entrepreneur goes to 100% vegan eateries as much as possible.

At home, Blake says he can be a bit boring, tending to focus more on nutritious rather than tasty, flavoursome dishes. His go-to meal is tempeh, steamed vegetables and lentils. As a snack, he’s been known to enjoy Medjool dates with peanut butter and strawberries. But his most recent discovery is sprouting.

“The nutrient density in those foods is crazy,” he says. Referring to The Sprout Book: Tap Into the Power of the Planet’s Most Nutritious Food, Blake adds: “Doug Evans says 40% to 50% of the calories in sprouts are protein, and the yield you get from one small container could solve so many issues like hunger and nutrient deficiencies.” Now, he is on a mission to devise the perfect sprout recipe.

“A lot of people don’t believe in marketing,” says Blake. “But this pandemic has shown otherwise.” In pre-coronavirus times, getting a restaurant busy, in a good location with good food, was easy. Today, though, with lockdowns and people at home, Blake says marketing is essential to reach audiences. And as many of us tend to have short attention spans, messages have to be even quicker and more relatable than ever.

With over a decade of experience in the business and marketing world, the entrepreneur says the key to success is putting your audience at the forefront.

Finding an intersection where what you do meets what they care about is fundamental. Flexitarians — individuals looking to be more environmentally conscious, improve their health and make more ethical decisions — are his businesses’ biggest market, and he says the best thing to do is meet them where they are. “Don’t hit them with non-relatable vegan terminology.”

One mistake a lot of vegan businesses will make is chasing vegan customers, whom Blake says will come to you anyway. He wants a restaurant full of non-vegans, and he believes the best way to get them onboard is working with other vegan businesses.

“The good thing about this industry is while it is expanding financially, we are very purpose-driven and collectively want to introduce these foods to people,” he adds. But an ever more conscious society is providing benefits and drawbacks to the “purpose”.

While people are increasingly understanding of the consequences of their consumption, sometimes, Blake says, it can become a bit much. What divided him was the Oatly boycott. “Blackrock could have invested in a meat-packing company, or a dairy business, but they chose to invest in a vegan business with a very clear purpose,” he points out. “We have to look at things from their level of impact.”

Check out our exclusive interview with the activist who brought the Oatly issue to light.

Blake doesn’t care who makes money out of it, because if someone came to him with capital to help scale his business globally, he would take it. With only a handful of businesses owning the entire food industry, we can’t afford to boycott everything. And he says if we continue to block these moves, transitioning people to plant-based diets will only take longer.

“Where I thought I’d be five years ago is very different to where I am now,” says Blake. As someone who’s always thought long-term, the pandemic showed him how to start becoming more adaptable, in life and in his business. It’s given him a chance to step back and focus on his own wellness too, as there have been times throughout life where it’s been “all work and no wellness”.

But one thing Blake won’t be changing is his focus. “Everything I do right now, I would still do even if I weren’t getting paid for it,” the entrepreneur says and smiles. The secret? It’s doing something he loves. Something that makes an impact on other people in the world before focusing on money.

“If you have success at a young age and you have a good amount of money, it can be very easy to turn and start focusing on money,” he explains. “But that never works out, so focus on doing what you love, or loving what you do.”

Over the next decade, the entrepreneur hopes he’ll get to grow his restaurants nationally and globally, and expand his own portfolio of investments. He wants to see everyone who can go plant-based to choose it. And he’s prepared to exploit himself to achieve that. But he also wants to give others his time to make more of an impact. He understands that working with 20 entrepreneurs, each with their own business, will make 20 times more impact than working alone.

As a young businessman, Blake always worked to succeed, but today, he knows success can’t be measured. “I read a good quote recently: ‘Do what you would do if you knew you would fail,’” he says. “Even if it never became successful and you never made tons of money, or did anything else, what would be so worthwhile that you could enjoy it for the rest of your life?”

Olivia Rafferty
Olivia is the Assistant Editor of The Vegan Review. An aspiring Middle Eastern correspondent currently studying journalism at City, University of London, she is passionate about the planet, she believes veganism is the first step to solving the complexities of climate change.
Previous articleMama Vegan Danila Callarelli: ‘The mother of all future Italian vegans’
Next articleHow Rwanda is leading the way in the fight against the plastic pollution crisis