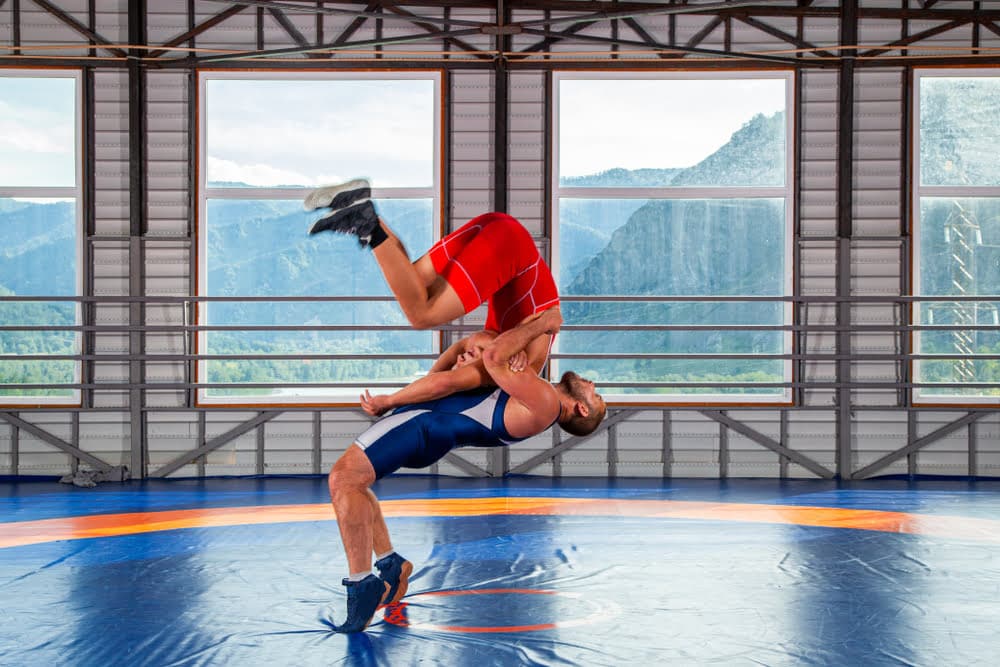 With The Game Changers proving muscle-building protein can be fully obtained from plant sources, athletes across the world are changing their diets. Vegan wrestlers are the latest to join this trend.

When you hear the word “wrestler”, you probably think of muscle-bound meatheads, with huge popping biceps and washboard abs. You probably assume they maintain a carnivorous diet. But there is a new generation of vegan wrestlers going against the grain, and proving that a vegan diet is optimal for in-ring performance.

A growing community of vegan wrestlers

A few years ago, vegan wrestlers were hard to come by. Many were afraid that switching their diet would negatively affect how they perform in the ring. Today, especially in countries like the UK, there has been a surge of vegan wrestlers. People like Pete Dunne, Tyler Bate and Trent Seven, known collectively as British Strong Style, have led the way for veganism in the wrestling world, encouraging others to go plant-based too.

It’s no surprise others followed suit, considering the incredible success that Dunne and Bate have had in wrestling. The pair have won many championships around the world, including multiple World Wrestling Entertainment (WWE) championships — the granddaddy of them all.

Dunne believes a vegan diet is perfect for wrestlers, as it provides him with the optimal nutritional value that helps him perform at an elite level. The wrestler can bench press 407lbs. Speaking on Good Morning Britain, Dunne explained that the roster of WWE UK wrestlers saw how much success he had even when going vegan, which encouraged many of them to give the vegan diet a go. Now, over half of the WWE UK roster are vegan.

“The big myth is that you won’t get enough protein. With a little bit of thought, it’s easy,” he explained to Susanna Reid. “You’re getting more vitamins; you’re getting better stuff out of the food. And the volume of food you’re eating contains better stuff.”

Bate and Seven agreed with Dunne as they discussed their disdain for meat. Bate, in particular, talked about feeling sluggish and tired the day after eating meat. But when he changed his diet, these effects were totally eliminated, allowing him to perform and train at a world-class level.

It’s not just UK wrestlers who are giving veganism a chance. Many North American wrestlers have followed in the footsteps of their friends from across the pond in cutting out meat.

Jimmy Jacobs is a vegan wrestler. He has wrestled all over the world for promotions such as Ring of Honor, won the tag-team championships five times, and had a stint in WWE as a writer. He recently signed with Impact Wrestling, where he performs today.

“Going on a plant-based diet in 2017 was an aspect that helped my overall health a lot, which subsequently helped my in-ring performances”, says the Michigan native. “When I got clean from drugs and alcohol in 2017, the next thing to change was my diet. I went on a plant-based diet, exercised regularly and went down from 180lbs to 140lbs.”

While it can be hard to maintain a vegan diet on the road, Jacobs explains it was still easier than he would have expected: “I was working for WWE at the time and they always had a ton of different healthy plant-based options at catering.”

Wisconsin-born wrestler and former WWE Cruiserweight Champion Austin Aries can attest to this, as he discusses in his book Food Fights. Aries writes about how easy it is to find vegan snacks and meals wherever he is. Whether he’s in New York City or Walcott, Iowa, there are always ways to satisfy your late-night vegan cravings.

There is no doubt that cutting out traditional protein sources like chicken from your diet can be a scary prospect, especially for athletes who rely on high levels of protein to stay on top of their game. However, the growing community of vegan athletes are proving that with a little thought and preparation, a vegan diet is perfect for high-intensity activity.

“I would recommend to not just athletes, but everybody, to consider a plant-based diet if nothing else, to step away from the habits you’re in right now,” says Jacobs. “Going vegan taught me that there is a different way of eating, and I am continually working on my eating habits to be more in harmony with my body and with nature.”

British Strong Style are great spokespeople for veganism, helping promote events such as Veganuary, as a way to introduce a vegan diet into people’s lives. American wrestler Eva Marie decided to give Veganuary a shot in 2019, and she is still vegan to this day.

“We run our lives on autopilot sometimes and stopping eating meat, dairy and eggs gave me some space to think about what it means to eat those things,” states Jacobs.

Matt Donaghy
Matthew is a journalism student from Ireland, living in London. He is an avid musician, a keen reader and always looking to delve into new things. Motivated by his vegan friends, Matthew is open to exploring the world of vegan subcultures and how they link with the world around us. You’ll probably find him in a hip London music venue listening to new bands and finding new things things to write about.
Previous articleBen & Jerry’s launches vegan ice cream to campaign against climate change
Next articleSuburban foraging with Sarah Tarmaster