PLANT CEO host Anant Joshi: ‘You’re voting with what you put on your plate’ 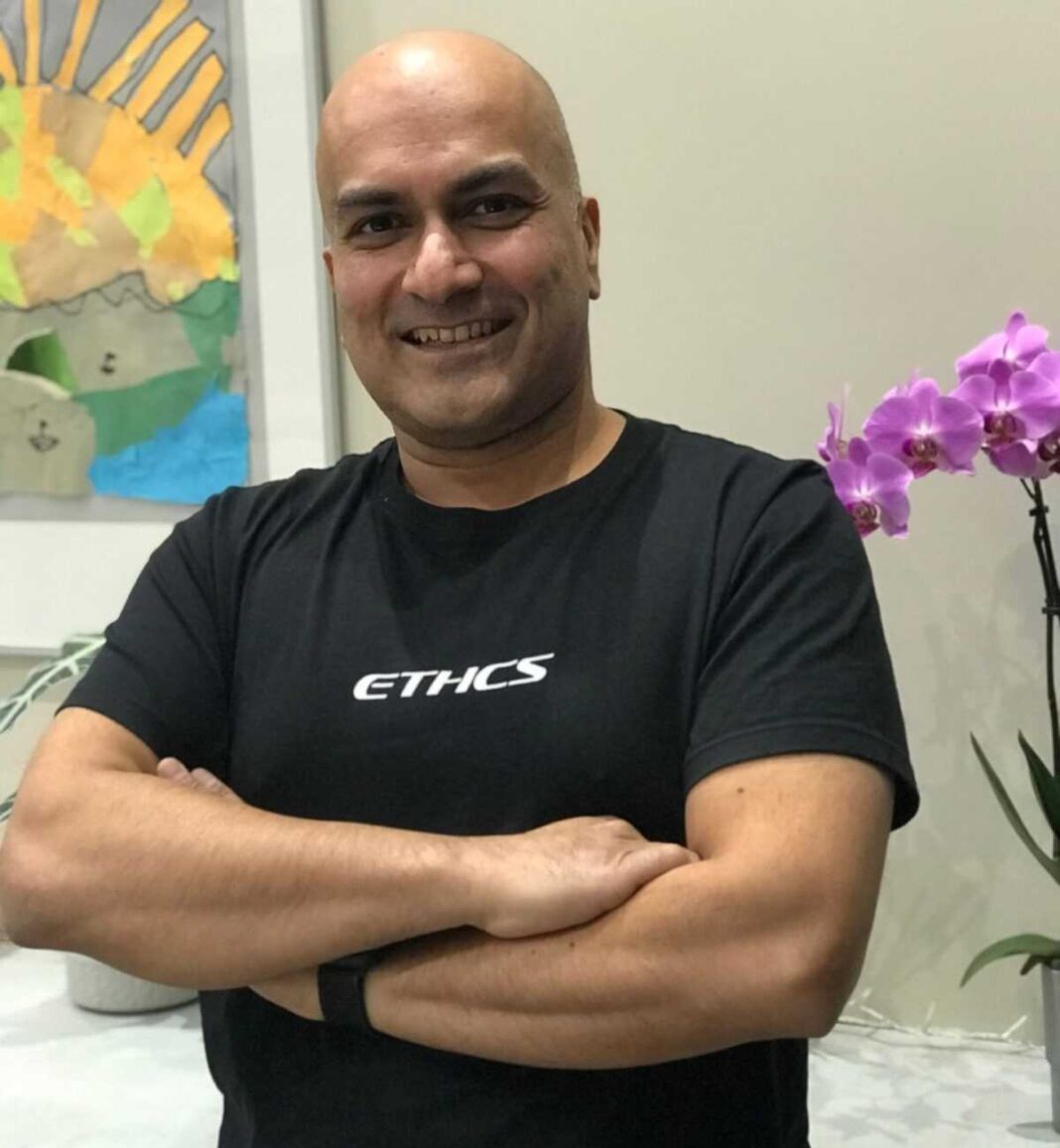 Tell us a little about your background.

Born in London, and of Indian heritage, my parents are from Gujarat. My dad used to work in finance for Barclays Bank in Uganda, East Africa. My sisters were born there in the 60s, and my dad got a transfer to London. That was just before Idi Amin kicked out all the East Indians. I was then born in London in the 70s.

Were you born vegetarian? How long have you been vegan?

Yeah. Hindu, vegetarian, Brahman. It was very easy for me to remain vegetarian all my life until just over two years ago when I became vegan, after watching a series of documentaries and YouTube videos, like Dairy is Scary, Earthlings, Cowspiracy, What The Health — all the ones that make you consider dairy being really impactful and harmful, whereas before I hadn’t really made the connection. There is definitely a link between dairy and the meat industry in that the quantity of dairy I was consuming results in the animal being killed for beef. First, the cow is abused for its milk and then for its body part. So consuming milk is the same as consuming meat, as far as the animal is concerned.

My motivation wasn’t really health, it was more my compassion for the animals and linking that directly with animal agriculture and climate change. My wife and kids are now vegan too. I have two girls, one’s 12 and the other’s nine.

At school, they get vegan meals. We’re not as strict with them; if they want to have an off-day or some chocolate, I’m not going to say no to them. At home, we only cook vegan food. It is their choice, and if they decide not to be vegan when they grow up, then that is their choice. But they completely understand and embrace veganism. My wife and I ensure they get a balanced diet with all the nutrition they need coming from plants.

How did PLANT CEO come up?

I’ve been in marketing for 20 years now. And I thought: “What can I do myself to spread the word? To decrease animals’ deaths being caused?”

The first idea I had was a one-day music festival. Take Bob Geldof’s (Live/Band Aid) reins and create an Animal Aid festival, and give the money raised to animal charities. But I didn’t have as many connections, and then I watched the Fyre Festival documentary, which put me off a little bit and I decided to put it on the backburner. It may come back again, if I meet the right people.

Last year, I decided to create this YouTube podcast, PLANT CEO, basically looking at businesses, showcasing certain companies, CEOs and leaders in their fields, and giving them a platform to talk about their brands. I used to watch This Week in Startups by Jason Calacanis. He would bring in a range of interesting companies and interview the founders. I kind of got the inspiration from that show, but to focus it on a niche area, which is plant-based leadership.

I started this last year, and interviewed Vanita Badlani from LaBanta London. I got a film crew, with a very high production quality. And then Covid-19 happened, and I thought: “Oh, great. Can’t do any of these one-to-one.” I spoke to a few people who said: “Why don’t you just do it on the web?” The production quality took a hit, but I thought it’s better to get the content out and not wait.

I’ve done 29 episodes now. Recently, it’s been more about food. That’s a really important part to tackle, because, in a way, you’re voting with your plate when you transition. It also helps give venture capitalists a voice to say why entrepreneurs should go to them, so they have a route to help fund their initiative. So far, this podcast has been aimed at people within our industry, who are interested in this topic or starting their own firm. It’s also used for that entrepreneur as a video to send to their investors.

One of the last ones I did, which I was actually debating whether to do, was with an undercover investigator. He had gone into a Texas dairy farm and auction house. He had just completed an investigation, and I’d interviewed him. It was important to do that — he’s not a commercial guy, but now and again, it’s good to remind ourselves why we’re doing it.

How do you select which companies to interview for PLANT CEO?

I want to find people who are doing something really interesting, and are quite passionate speakers. I get people coming to the show, or I would source them myself. Even if they’re not that recognised, I want to get them on the show if they’re onto something or they’ve got a good story. Some I’ve found on meetup groups, and others have approached me, like VC firms.

What was it like going from a position of being interviewed to interviewing people?

I’ve helped grow startups myself, and I’m still consulting in the marketing industry. I’ve gone through starting a company from nothing on the ground to getting them IPO’d or a trade sale, and growing the product and customer base. Having that experience myself, with early-stage companies, hosting events around the world, and being interviewed by journalists, the questions I come up with stem from the experience I have on the business side.

How do you decide what company to invest in?

For me, it really comes down to the founder. It’s usually a gut feeling that they are on a big mission and are very driven not to give up, regardless of the barriers. It’s not like I have a fund or somebody who’s in it with me, but I can help them get on the path to get more money and give them some great strategic advice, which is why I’m an angel investor.

Sometimes in the interview process, they might say something that triggers me, and I think: “They’re onto something here and they need the backing.” We need to do everything we can to help encourage growth and activism in a way, getting the message out, encouraging startups and more investment, and to bring faster change.

What companies have you invested in?

The first investment I did was a company called VeggieVictory in Nigeria. I met him randomly on the Beyond Animal platform, which I’ve also invested in. I’ve also done some crowdfunding investments. There’s Kale United, The Vegan Kind, allplants, and Perfect World Ice Cream.

There was another company not quite in the plant-based area but running an urban farming company called GrowSquares. It uses weather, lidar and location data to then send customers their own personalised seed and soil packets. There will then be a high degree of success that those herbs and vegetable plants grow.

Lastly I’ve just invested in Eat Virgin, who have created a frozen food range and super-cookie, which is protein-based. You can eat it and blend it into smoothies or protein shakes.

What do you hope to achieve from the show?

My goal is to inspire people to create their own companies. The big aim is to ultimately decrease animal suffering and death, regardless of how I get there, I just want that to happen as quickly as possible. The connection with that is around climate change. And the third one is around health, and all those are connected. I also want to resonate more with flexitarians and meat-eaters and actually try and change opinions, whatever their driver might be.

What’s been your favourite episode of Plant CEO so far?

Oh, that’s a tough one. I had a lot of fun with Ryan Bethencourt, he’s a fun guy and we’ve invested together in VeggieVictory.

And then, I was a bit surprised but the really passionate guy was actually the undercover investigator. He’s not a CEO — some CEOs might be a bit more conservative and from a corporate line — he’s somebody who’s free and can just talk and be passionate about what he does. So that one’s quite high up for me, potentially.

Plus, I recently interviewed Damoy Robertson, founder of The Vegan Review, which is due to be released. It’s great to see the young, intelligent and driven entrepreneur that he is.

Anay Mridul
Anay is journalism graduate from City, University of London, he was a barista for three years, and never shuts up about coffee. He's passionate about coffee, plant-based milk, cooking, eating, veganism, writing about all that, profiling people, and the Oxford Comma. Originally from India, he went vegan in 2020, after attempting (and failing) Veganuary. He believes being environmentally conscious is a basic responsibility, and veganism is the best thing you can do to battle climate change. He gets lost at Whole Foods sometimes.
Previous articleNestlé and JDE set up the first UK-wide coffee pod recycling scheme
Next articleCrackd vegan egg review: ‘Made, not laid’