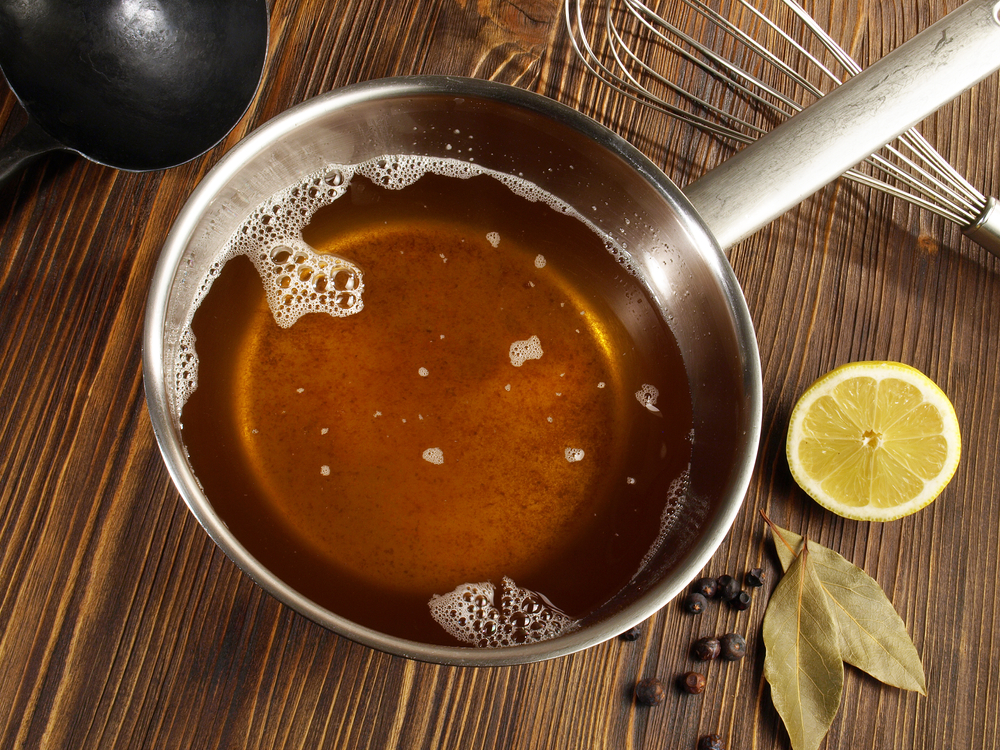 Why can’t vegan butter brown? Plant-based alternatives need a few key components, and some brands have unlocked the trick.

It was when I was first making vegan chocolate chip cookies that encountered this problem. They just didn’t taste nutty enough. Deep into the rabbit hole of research, I realised what I was missing was an age-old technique from French cuisine.

Beurre noisette literally translates to hazelnut butter. But the French term doesn’t actually refer to the nut butter that’s the base of your favourite chocolate spread. It’s actually the browning of butter, which lends it a nutty flavour and deep colour akin to that of hazelnuts.

Brown butter is the result of a renowned technique used for both savoury dishes — like a brown butter sage sauce — and desserts, elevating the flavour notes of things like chocolate chip cookies, madeleines, pancakes and financiers.

It’s a deeply celebrated flavour modification and one that has always evaded vegans. Vegan butter can’t usually be browned, as the process has a lot to do with the composition of the butter and the addition of dairy in it.

Butter contains water and milk solids, in the form of casein and whey proteins. The browning of butter is the result of the milk proteins and sugars going through the Maillard reaction upon heating. Dr Martin Wickham, director at Cambridge Food Science, explains that the Maillard reaction is the combination of many small, simultaneous chemical reactions that occur when proteins and sugars in our food are transformed by heat. This produces new flavours, aromas and colours. 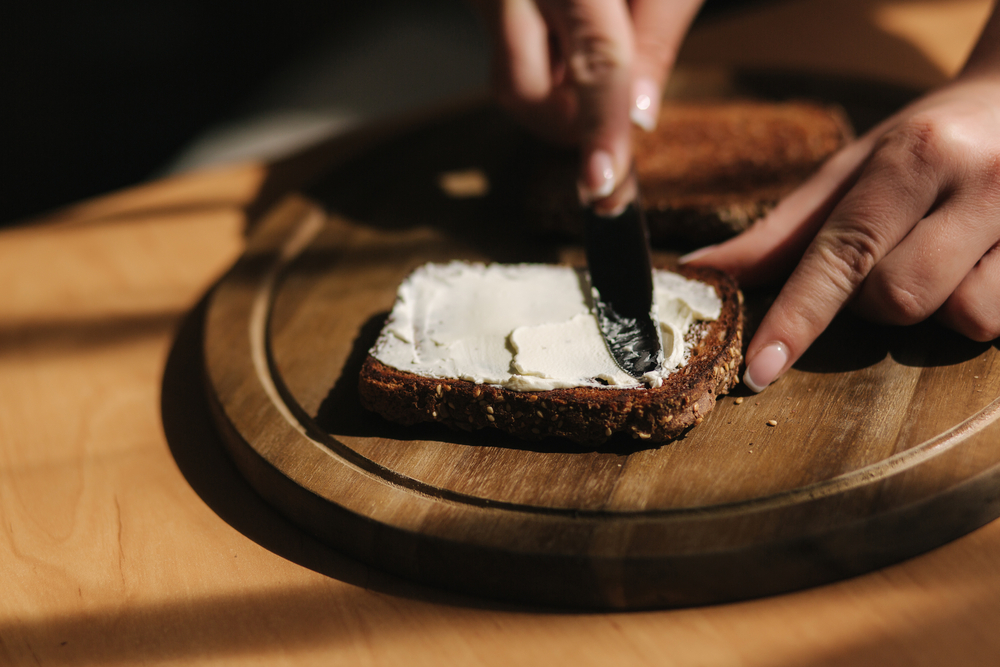 “In its simplest form, the Maillard reaction is a chemical reaction between an amino acid and a reducing sugar, requiring the addition of heat. Like caramelisation, it is a form of non-enzymatic browning,” Wickham tells me.

Why can’t that happen in plant-based butter? The proteins and sugars in dairy are what help brown butter. “Vegan butters are typically made of plant-based oil and water and therefore do not contain either, or both, of the protein and sugars needed for the Maillard reaction to brown the butter during heating,” he explains.

Wickham says the usual base of non-dairy butter is a plant-derived oil like olive, avocado, coconut, palm kernel oil, or a combination of oils. There are often additional ingredients acting as flavour enhancers and emulsifiers to better resemble and function like dairy butter.

Brands use wide varieties of plant oils in their vegan butters. Vitalite and Pure both use sunflower, rapeseed and sustainable palm oils in their spreadable butters. Flora, which backtracked on its vegan consumers by reintroducing buttermilk to its Buttery range last year, combines rapeseed, sustainable palm, sunflower and linseed oils in its Original variant, while the Light doesn’t have linseed. Naturli’ also uses rapeseed, along with coconut and shea butter oils, in its vegan butter.

But Pure, Flora and Naturli’ all have block-style butters too. Pure uses a combination of palm and rapeseed oil. Palm oil is semisolid at room temperature, which helps give the butter its block shape. 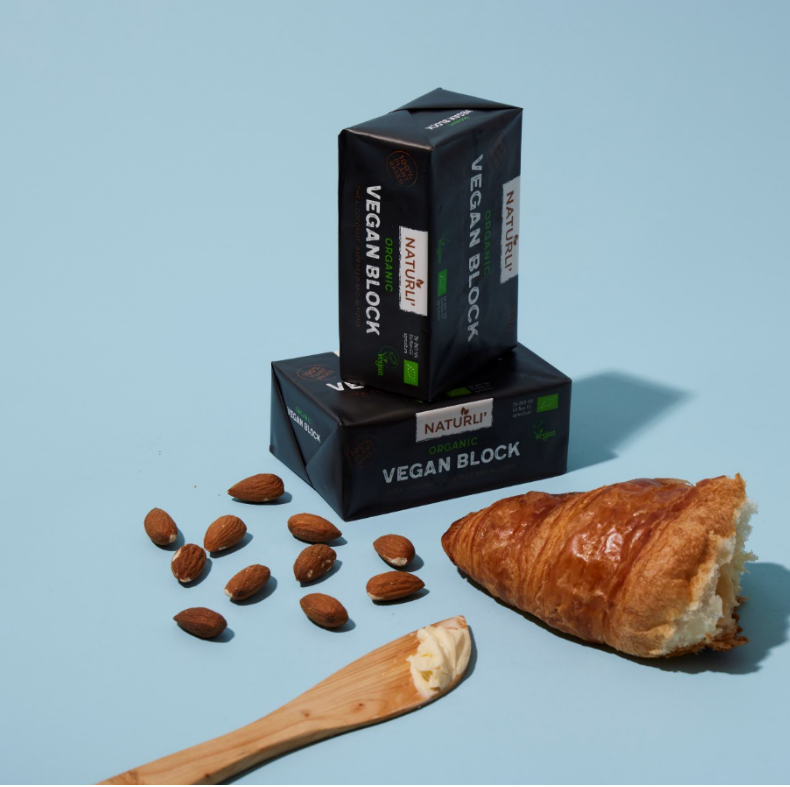 While Flora’s and Naturli’s block vegan butters have the same oil bases as the spreadable versions, the proportions are different. Henrik Lund, CEO of Naturli’ Foods, tells me the brand decided to use shea butter oil in its products because it wanted to avoid the use of palm oil, given its shaky environmental implications.

Read our story about the environmental and wildlife consequences of palm oil.

“Unlike vegetable or olive oil, coconut oil has a higher melting point, and therefore, when included in block style vegan butters, it will make sure that the block stays firm even outside the fridge,” says Wickham. “Blending these solid plant oils with plant-based liquid oils such as olive, sunflower, vegetable oils, etc. can make a spreadable butter.”

Naturli’ also has a surprise ingredient in its block butter: almond butter. While the concentration is minute (1%), it’s this ingredient that both Lund and Wickham say helps it brown.

For any vegan butter to brown, Wickham notes that you need to imitate the Maillard reaction by adding a plant-based source of both proteins and sugars to the mix. When asked about the use of almond butter in Naturli’s block, Lund says it contributes to more butter-like notes and the browning of the product.

“Naturli’ contains a nut milk, almond, that provides both protein and sugars,” Wickham says, which is why it should brown upon heating.

Currently, the only butter that is marketed as brownable is Miyoko’s European Style Cultured Vegan Butter, which is exclusively available in the US. The main ingredients? Coconut oil and cashew milk.

“Cashews, like most tree nuts, contain both protein and sugar as well as oils,” explains Wickham. “Therefore, the addition of the nut-based milk provides the necessary plant-based substitute to dairy proteins and sugars.”

So one way to replicate the browning of traditional dairy butter, it seems, is to add nuts to the composition, as opposed to just oil blends. Apart from providing the components needed for browning, the nuts also contribute to a slightly nuttier taste and help emulsify the oils with the water.

It just goes to show that with a little science, plant-based food can be an easy and effective substitute to its animal-based counterparts. The devil’s in the details. It’s time to make some vegan brown butter cookies.

Check our list of the best plant-based butter brands in the UK.

Anay Mridul
Anay is journalism graduate from City, University of London, he was a barista for three years, and never shuts up about coffee. He's passionate about coffee, plant-based milk, cooking, eating, veganism, writing about all that, profiling people, and the Oxford Comma. Originally from India, he went vegan in 2020, after attempting (and failing) Veganuary. He believes being environmentally conscious is a basic responsibility, and veganism is the best thing you can do to battle climate change. He gets lost at Whole Foods sometimes.
Previous articleVegan trends not to buy into (without researching first)
Next articleIs Gordon Ramsay really turning vegan? Don’t make us laugh!