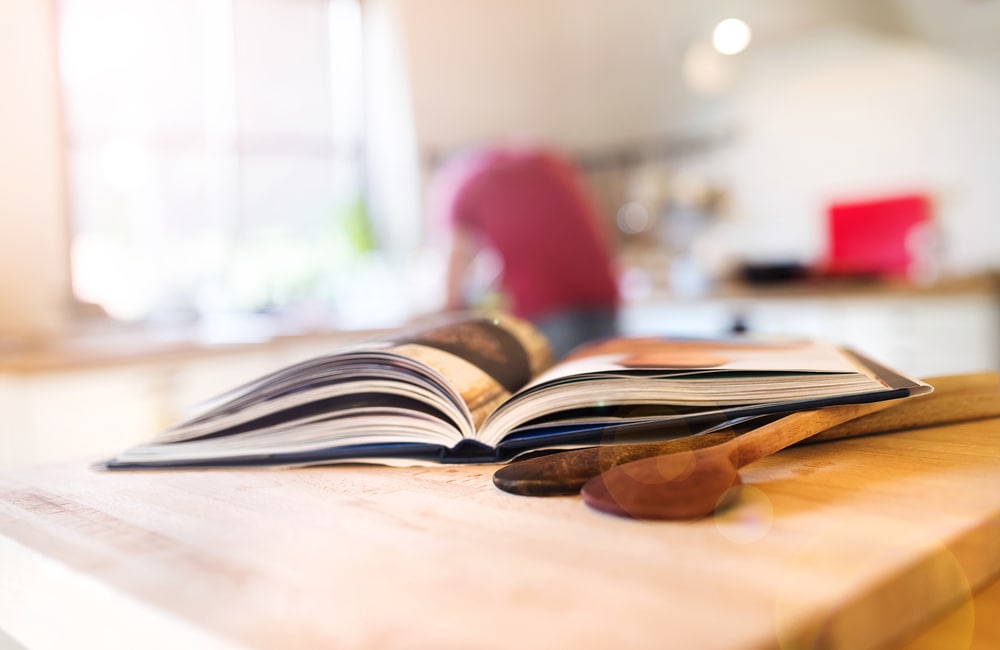 A bad year for the world, but a great year for veganism. Here are 10 of the best vegan cookbooks released in 2020.

Flipping through pages to find something you didn’t know existed is so much more fulfilling than searching for the very thing you wanted. It’s what makes encyclopaedias better than Google. It’s also what makes cookbooks better than online food blogs.

For most of the world, 2020 has been a terrible year. You know, the pandemic and all. But even so, vegans have had win after win this year, with more brands coming up with plant-based products and more people transitioning from meat-based and vegetarian diets. Among the facets of the massive upsurge in interest in veganism are cookbooks. This year has seen some established authors add to their portfolios, and new writers disrupt the recipe book scene.

Here are The Vegan Review’s picks for the 10 best vegan cookbooks released in 2020. 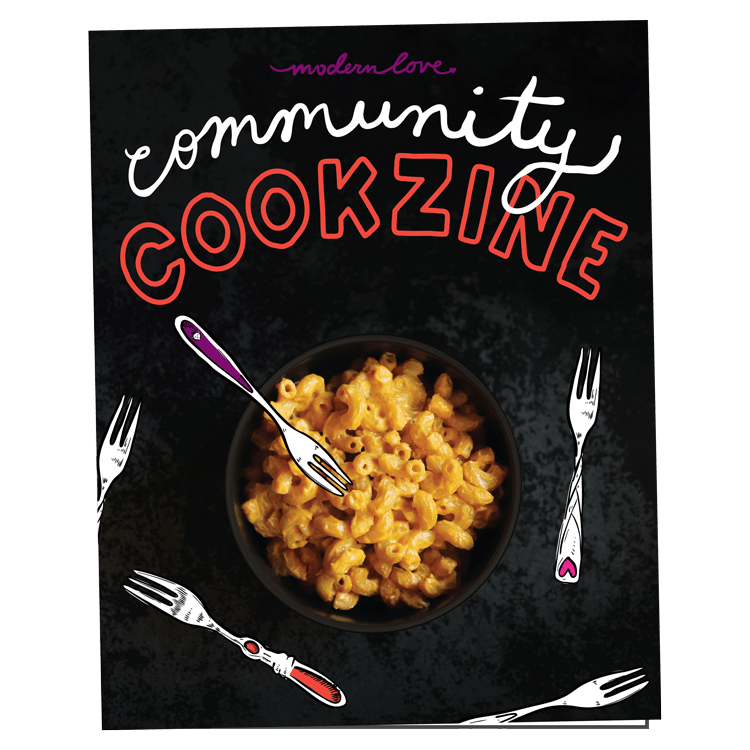 Modern Love is a renowned restaurant among vegans in New York. But the restaurant has its roots in Omaha, Nebraska, which is owned by one of the most influential people in vegan cuisine, Isa Chandra Moskowitz. This year, the eatery released its cookbook, Modern Love Community Cookzine, which it calls a “time capsule for cooking during a pandemic”.

As the name suggests, it’s not just a cookbook, but a vegan food magazine. So, along with recipes like sourdough bagels and the eatery’s famous Mac & Shews, it has personal stories of 12 vegan chefs and features like fancy plating on a budget and making dressings out of stuff you didn’t know your fridge even had. It’s available digitally and in print, and the ‘cookzine’ funds Modern Love’s Community Meals project.

Read what New Yorkers have to say about Modern Love and living as a vegan in the city.

Eat For The Planet 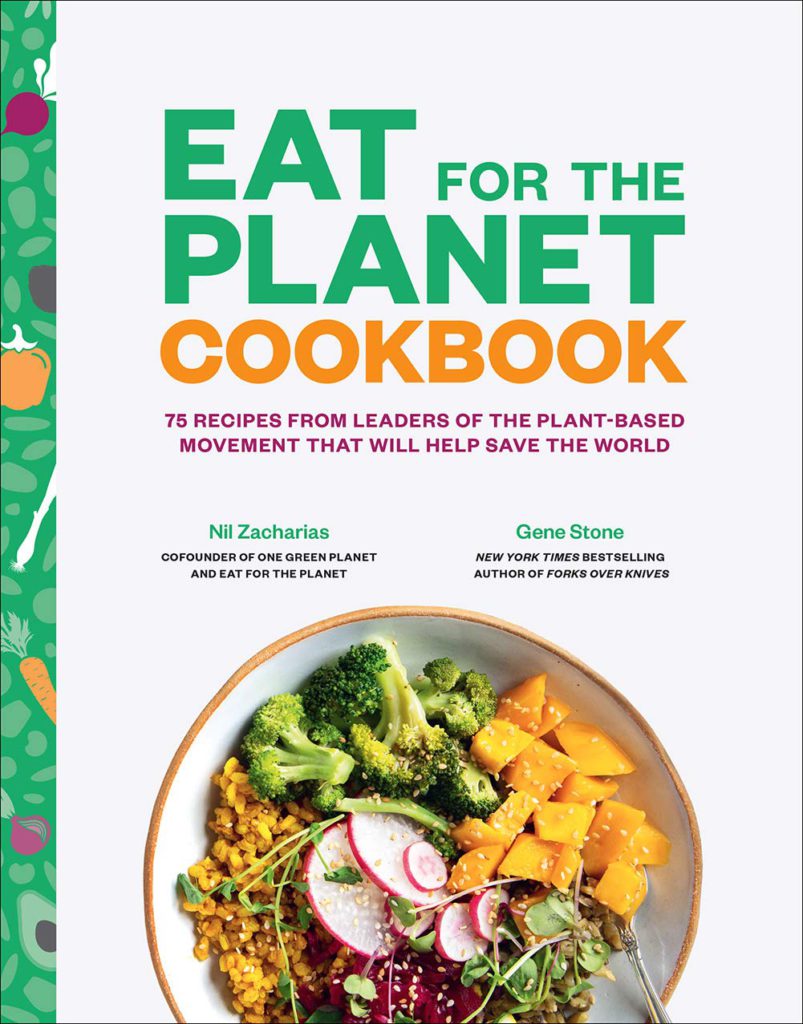 Chronologically, this is the first book on this list, released in the first week of January 2020. Eat For The Planet is a consulting firm and media platform to help brands and organisations do their bit in the mission to transform the global food system. Its founder is Nil Zacharias, whose resume includes Plant Based World Expo, Plant Based Foods Association and One Green Planet.

The Eat For The Planet cookbook features an amalgamation of recipes from famous vegan chefs like Wicked Kitchen’s Derek Sarno and celebrated baker Fran Costigan, companies like Ripple Foods and Beyond Meat, and plant-based restaurants like Veggie Grill, Next Level Burger, and The Standford Inn. Among the 75 dishes in the cookbook are a farmhouse Ceasar salad, teff almond pancakes and smoky maple tempeh burgers. 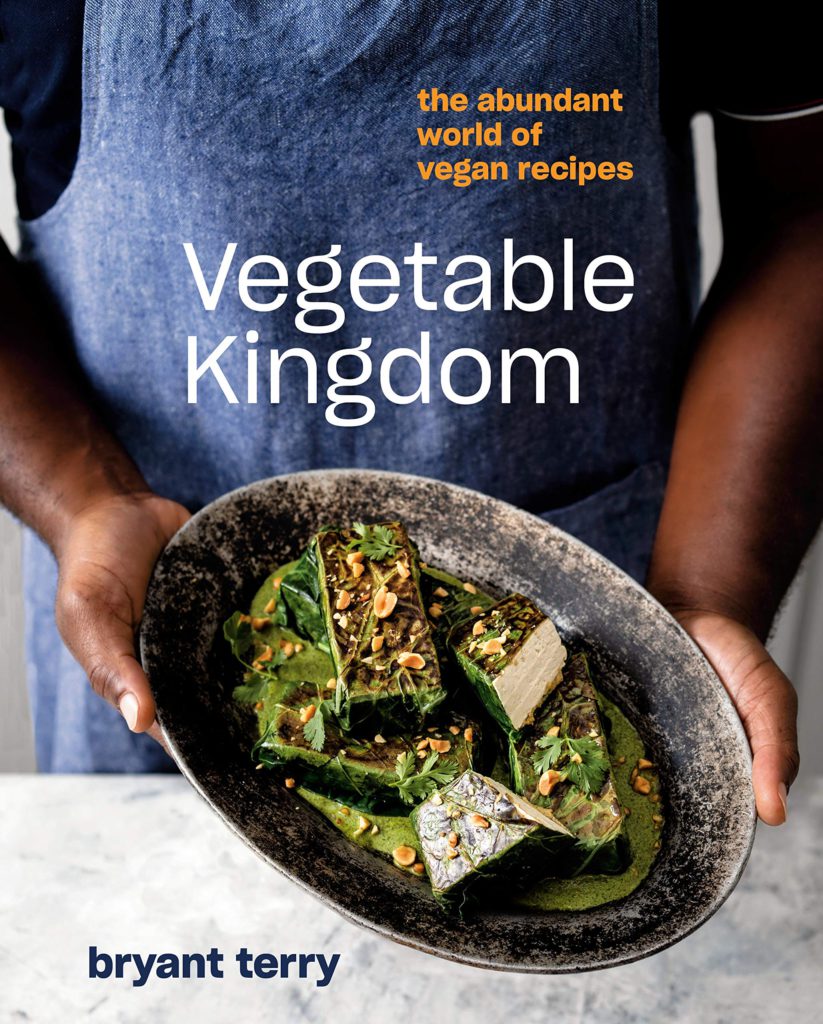 Bryant Terry is a household name in the vegan world. Famous for his work as a food justice activist — as part of which he’s been a vocal critic of the original name and language of Thug Kitchen — he’s also a James Beard Award-winning chef. Vegetable Kingdom is his fifth book, released in February 2020, six years after his revolutionary cookbook, Afro Vegan.

Appearing on multiple best cookbook lists — vegan or otherwise — this brings to light Terry’s focus on ingredients, not alternatives. The cookbook is organised by ingredient and covers the basic fundamentals of plant-based cooking. Some of its recipes include dirty cauliflower, millet roux mushroom gumbo, and braised fennel, highlighting the book’s Afro-Asian influence. 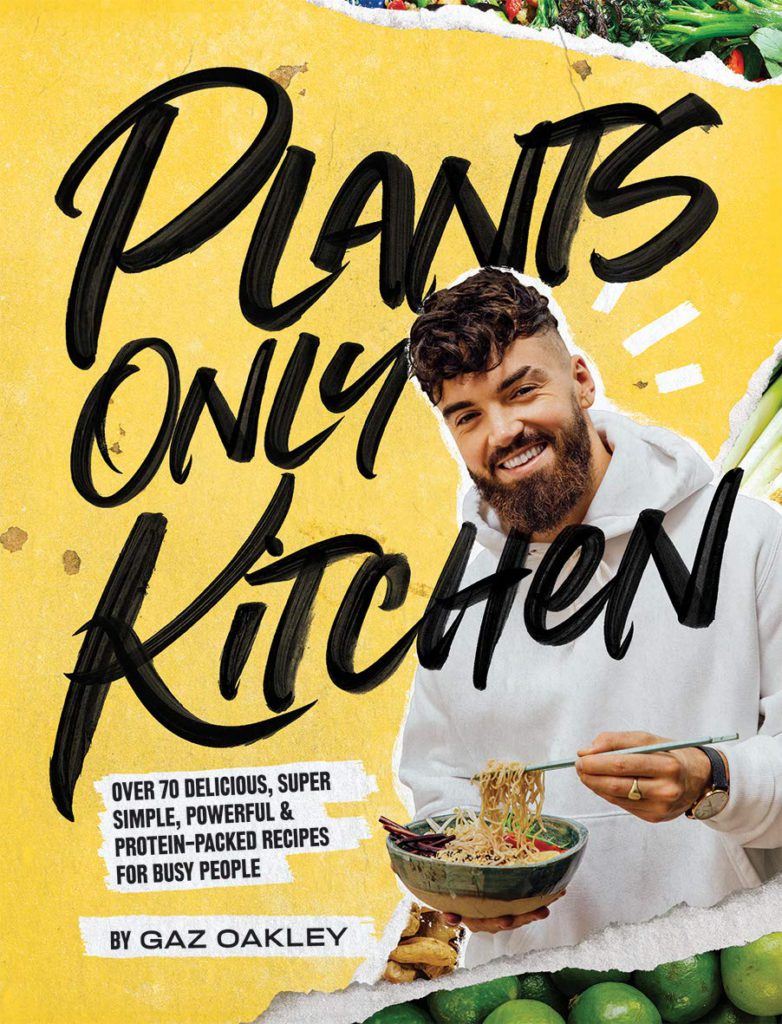 One of the UK’s most popular vegan YouTubers, Gaz Oakley (popularly known as Avant Garde Vegan) is renowned for his flavourful recipes and indulgent vegan cooking. With a hand in creating the menu at famous British vegan burger chain The Vurger Co, Plants Only Kitchen is his third — and easily the most famous — cookbook.

With over 70 dishes including Caribbean waffles, protein blueberry pancakes, sweet potato Piri-Piri burgers and potato chilli bake, the cookbook has labels to flag whether a recipe takes under 15 minutes, is high-protein, or is suitable for meal prep and batch cooking. Oakley has curated a mix of quick meals and more intricate recipes to cater to every mood, and you can even get a signed copy of the book on his website.

Read our story about Gaz Oakley and his journey to vegan starhood. 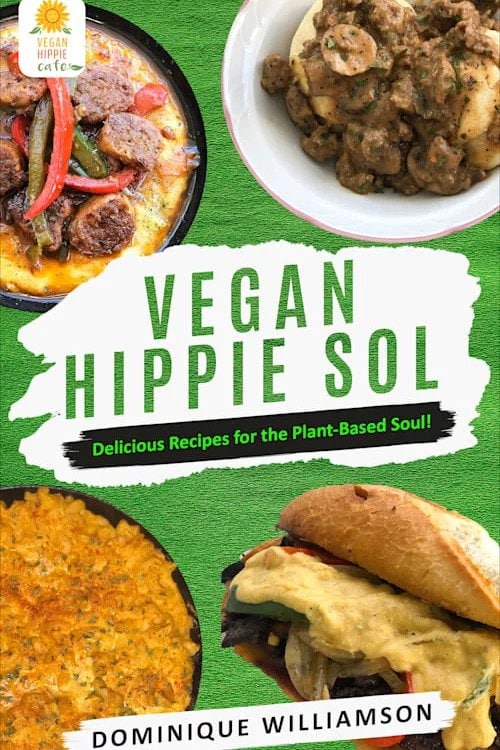 Vegan chef Dominique Williamson has had a rollercoaster of a year. First, she opened her dream project, Vegan Hippie Cafe. Then in April, she launched her first cookbook, Vegan Hippie Sol. In July, she was subject to alleged harassment and racism from a seafood company online, who faced backlash and issued an apology. Finally, she launched her second, Christmas-themed cookbook.

While both are ebooks, the first one, called Vegan Hippie Sol, features 20 soul food recipes (and a grocery list) that are highly comforting. Williamson is adept at veganising different dishes, which is reflected in the recipes her book comprises — from coconut creamed corn and smoked sausage biscuits and gravy to sweet agave banana cornbread and ‘philly cheez steaks’.

The UK’s bestselling vegan authors released their latest book, Speedy BOSH!, in September, focused on quick weeknight meals under 30 minutes. Henry Firth and Ian Theasby told The Vegan Review they want to showcase how to make the most out of vegetables and dispel the misconception that vegan food can be a headache to cook.

The cookbook is packed with recipes like a 30-minute vegan mac and cheese, green shepherd’s pie, peanut noodles, millionaire shortbreads and a drunken hot chocolate. It has tips to make the cooking process quicker as well as, like with most cookbooks, vegan staples for the kitchen, in this case to facilitate speedy cooking.

Check out three recipes from Speedy BOSH! on The Vegan Review. 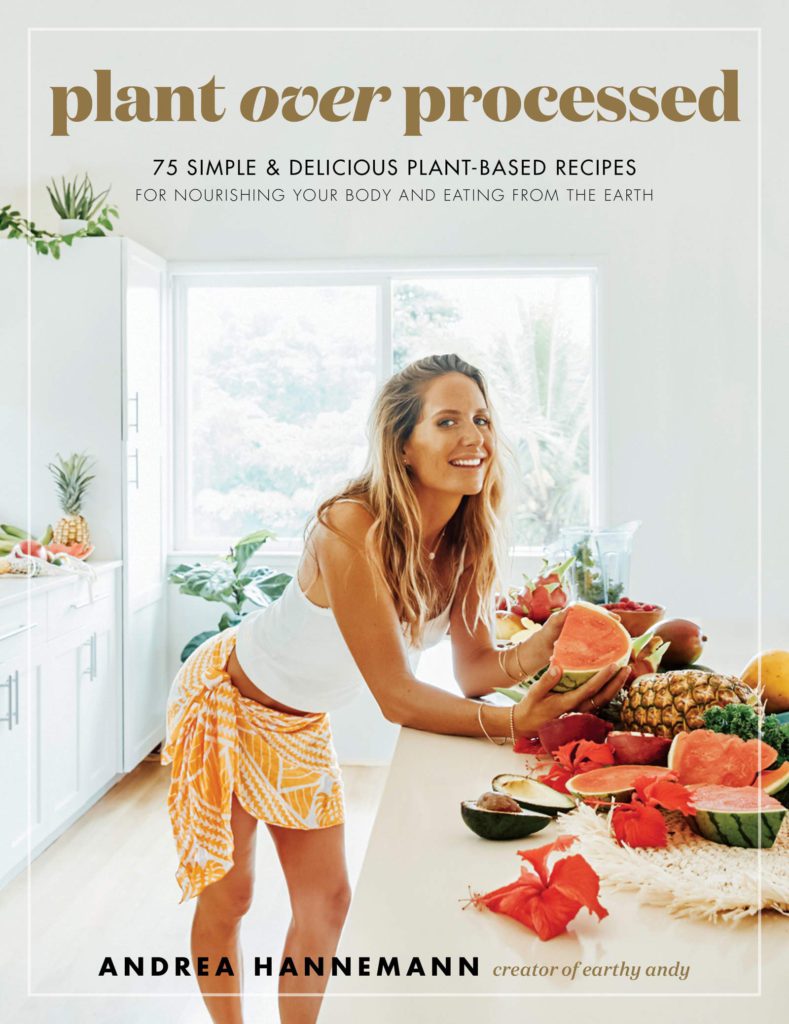 The newest on the list, Plant Over Processed is vegan blogger Earthy Andy’s first cookbook. It was released on December 29, but made its way to the bestseller list on Amazon long before that. Author Andrea Hannemann transitioned to a whole foods-based vegan diet after suffering from health issues like IBS, asthma, brain fog and chronic fatigue, and now her entire family eats the same way in their Hawaii home.

This cookbook emphasis Hannemann’s ‘mantra’ of whole, plant-based foods over processed ingredients. It’s partially aimed at flexitarians and non-vegans looking to transition to a plant-based diet, with a 30-day challenge to detox the body followed by a long-term plan for the transition. There are smoothie and bliss bowls, vegan comfort food and decadent desserts, all made from natural ingredients to sway the reader away from processed foods. 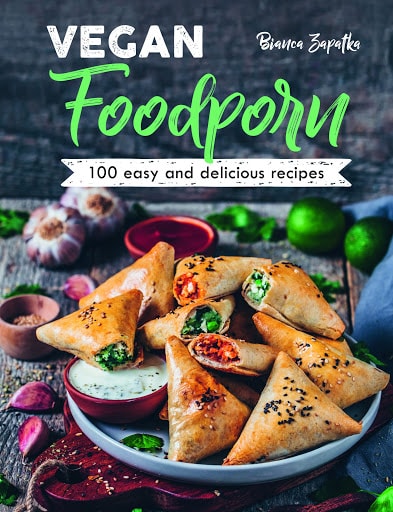 Originally released in German in 2019, the English version of famous vegan Instagrammer Bianca Zapatka’s cookbook was released in May 2020. Zapatka is a writer, photographer and recipe developer, whose food blog and Instagram and Pinterest accounts are known for their eye-catching plant-based dishes, as the name Vegan Foodporn suggests.

This is the first of two cookbooks she launched in 2020, the other being Vegan and Easy. The book banks on appearance and foodporn, with a how-can-that-be-vegan premise for its dishes. The recipes in Zapatka’s first cookbook include vegan vanilla pancakes with blueberry cream and white chocolate, tortellini with almond ricotta and burrito samosas with guacamole. 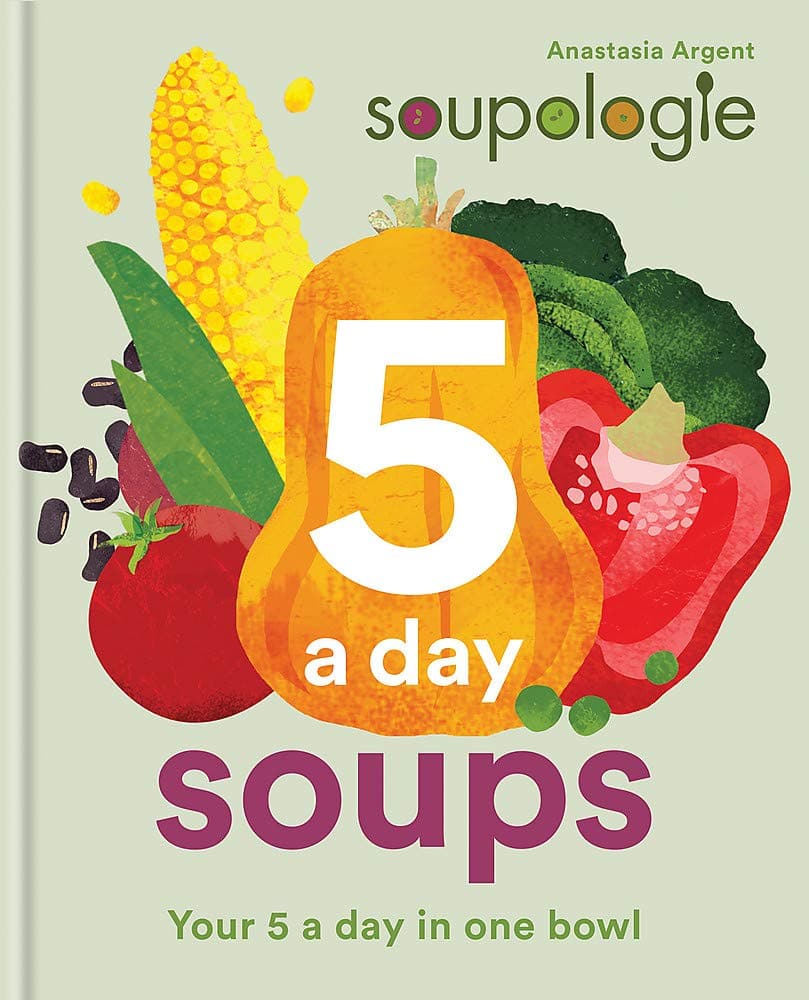 Soupologie has been doing some great work with its range of vegan and gluten-free five-a-day soups, and its new Foodologie line takes things one step further with nourishing plant-based bowls and meal pots. In September 2020, the company released its first cookbook, Soupologie 5 a day Soups, featuring nutritious soups, stews and more.

The first part of the book is dedicated to five-a-day nutrition, detailing what it entails with a guide. All the recipes, like the tomato melanzane soup, courgette and split pea soup and spiced pineapple and tomato stew, have been analysed by a qualified nutritionist so the reader can immediately see the nutritional benefits of the food they’re eating.

Read our review of Foodologie’s vegan meal and snack pots.

Hemp Can Change The World 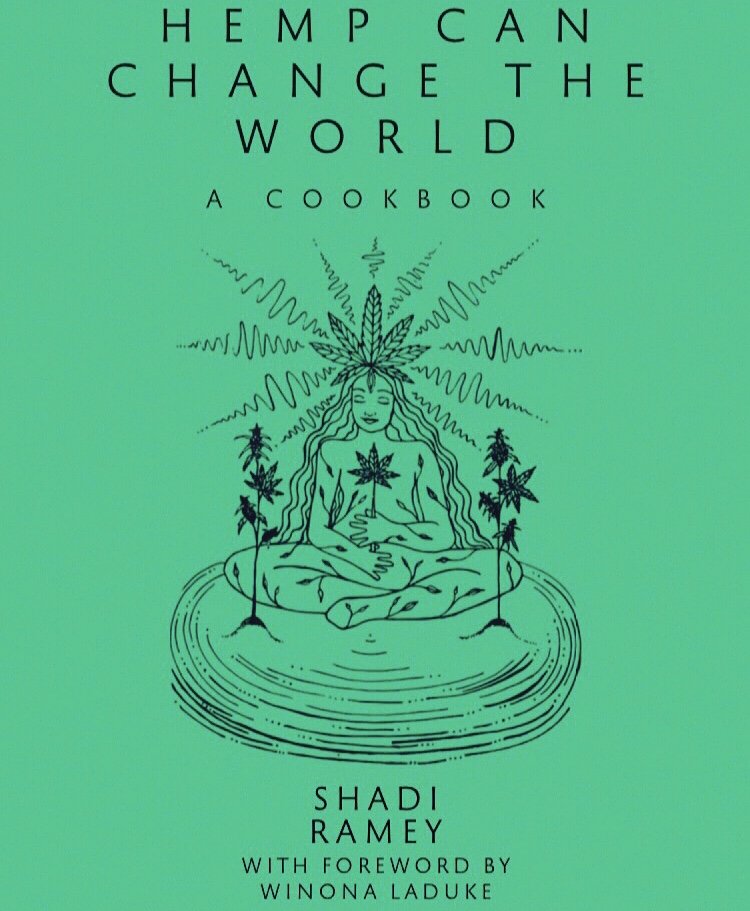 Hemp Can Change The World is a carbon-neutral vegan cookbook. Authored by chef and culinary anthropologist Shadi Ramey, whose experience and background in working with hemp has made her a revelation in cannabis cuisine. She has been a plant-based baker for 20 years, and started growing hemp on her small farm in Boulder in 2015. In December 2020, she released her first cookbook.

The book’s mission is as much to showcase vegan and gluten-free recipes using hemp as it is to spread awareness about hemp’s “high vibe” nutritional profile. “Cannabis is one of our greatest plant allies on planet Earth,” Ramey says. It’s the world’s first cookbook printed on hemp paper, and the first 100% carbon-neutral book project. $1 per book sale will go to the Last Prisoner Project, and 1% of sales to the One Percent for the Planet project.

Anay Mridul
Anay is journalism graduate from City, University of London, he was a barista for three years, and never shuts up about coffee. He's passionate about coffee, plant-based milk, cooking, eating, veganism, writing about all that, profiling people, and the Oxford Comma. Originally from India, he went vegan in 2020, after attempting (and failing) Veganuary. He believes being environmentally conscious is a basic responsibility, and veganism is the best thing you can do to battle climate change. He gets lost at Whole Foods sometimes.
Previous articleKISS Vegan review: roasts you’ll fall in love with
Next articleFluffy vegan beetroot pancakes