Pushing for Hope: The story of Rich Adams

In 2019 Rich Adams scootered across the width of Canada from the Atlantic Ocean to the Pacific Ocean. He took on the epic 4035-mile journey to promote veganism and total animal liberation. He is the first person ever to complete such a trip unsupported on a kick scooter.

Just a year before, he also scootered across South Korea to raise awareness about the horrors of the Korean dog meat trade.

‘Pushing for Hope’ is a film that will tell the story of Rich Adams’ advocacy. We at The Vegan Review caught up with Rich to ask him some questions.

An interview with an inspiring vegan activist

Firstly, what can you tell us about the film Rich?

‘Pushing For Hope’ is a documentary film made by Trey Morrow that tells the story of my trip across Canada on a kick scooter. This was a trip in honour of one of my rescue dogs Kathy who came from South Korea. She sadly died in my arms whilst in Canada. My aim was to raise awareness for the Dog Meat Trade in South Korea and show that Kathy’s life had meaning. I captured all the footage, and originally the plan was for Trey to do a short video for each province. But as the trip progressed, I got more and more footage and it became hard to do the short videos. Trey then told me he wanted to do a full-length documentary to really capture the emotion and meaning of the trip. I thought it was a great idea and I hope it inspires someone to make a change. It certainly shows that there is no excuse to not go vegan. We can do anything we want and do it with compassion for animals.

What made you choose a scooter? 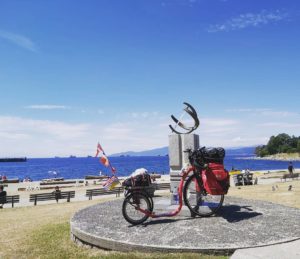 That idea came from my first trip across South Korea. I wanted to do something that was physically challenging and would get attention. My plan was to run across South Korea but I’m not that fit and didn’t think I would be able to do it in the timeframe involved. The idea for the scooter was because it would be quicker than walking and it’s unique. Seeing a six-foot guy with a ginger beard on a scooter should get attention. This then evolved into getting a bigger scooter for Canada so I could carry all my own gear. I imported the scooter and modified it for the trip. No one had ever done this alone and unsupported on a scooter, so I was in uncharted territory as to how to set the scooter up and what to expect. I like those challenges and it was imported to do this for the animals.

The trip took a month longer than you originally planned. What challenges did you face?

I had originally booked three months of work and honestly thought I could easily do it no problems. So I couldn’t have been more wrong. I started the 1st April and expected decent weather. I seemed to get hit with freezing weather, high winds, snow, and rain all within the first week! Travelling east to west meant that I was also going uphill everyday to the continental divide. It was tough and once I got to New Brunswick it became obvious that I wouldn’t make it in three months. Add to the weather the mechanical issues of punctures and faulty tires and I knew it was going to be a real challenge! Tires in the end became my biggest obstacle. The scooter had an odd sized 18” rear wheel and that proved to be a special-order tire. I ended up ordering for places ahead of me but got three faulty tires. In the end I bought 10 tires for the rear wheel. Unreal experience.

4035 miles is a huge distance to cover. What was your preparation and training like?

I didn’t do any training for the trip. I took the scooter out a few times to test it and make some footage for the promo video but covered only 60 miles on it prior to the trip over several months. The Canadian winter meant that it was too cold and snowy to safely take the scooter out. My pre-trip diet consisted of vegan ice-cream and cookies. I’m not an athlete and just believe the body adapts. If you look careful you can see my belly in the first parts of the video slowly shrink as the trip progresses.

How did it feel when you finally reached the Pacific Ocean?

It was a very odd feeling. When I started the trip, I had an aim – a very specific goal. So I 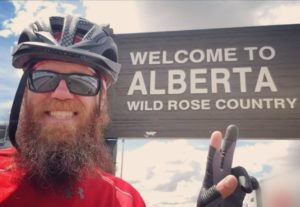 spent four months living that dream. Everyday aiming to reach my goal. Suddenly, I was there and it was over. So I had very mixed feelings of happiness that I had actually made it, but sadness that the trip was finished. I also thought about Kathy and it made me sad to think she had never seen the ocean in her life.

I also had people come meet me there who I had met on the trip or who had heard about the trip and had come to meet me. That was really touching and meant so much to me. It was also a very special day as I got to see my partner Kathy. For the four months I was away, she did all the hard work of looking after the dogs and working full-time. So I owed her a great deal and this was a chance for us both to enjoy the realisation that the hard times had been worth it. Kathy also brought the dogs King Kong and Bear, so it was great to see them aswell.

So, you have already carried out two epic trips on the scooter. Do you have any future adventures planned?

I’m not sure my partner Kathy will be happy with me saying this, but I do plan to do more trips. I have to do whatever I can to raise awareness for the dogs in South Korea and for all animals around the world. At the moment it’s a question of money and time. But I’m always thinking of where I might go next.

Thank you for taking the time to talk to us Rich. And thank you for all your efforts and dedication. How can readers find more about you and your advocacy?

Sean Barrs
Sean is a vegan activist and academic. He is writing his English Literature PhD thesis on the politics of diet. He is also an ultra-runner and a proud member of Vegan Runners UK. In the past, he has written for numerous publications including Plant Based News. He came to The Vegan Review to help promote the work of others, he is especially interested in writing on individuals who advocate for the vegan lifestyle through sports and other forms of activism.
Previous articleThe Shocking Truth About The Exotic Leather Industry
Next articleA complete guide to cruelty-free shampoo