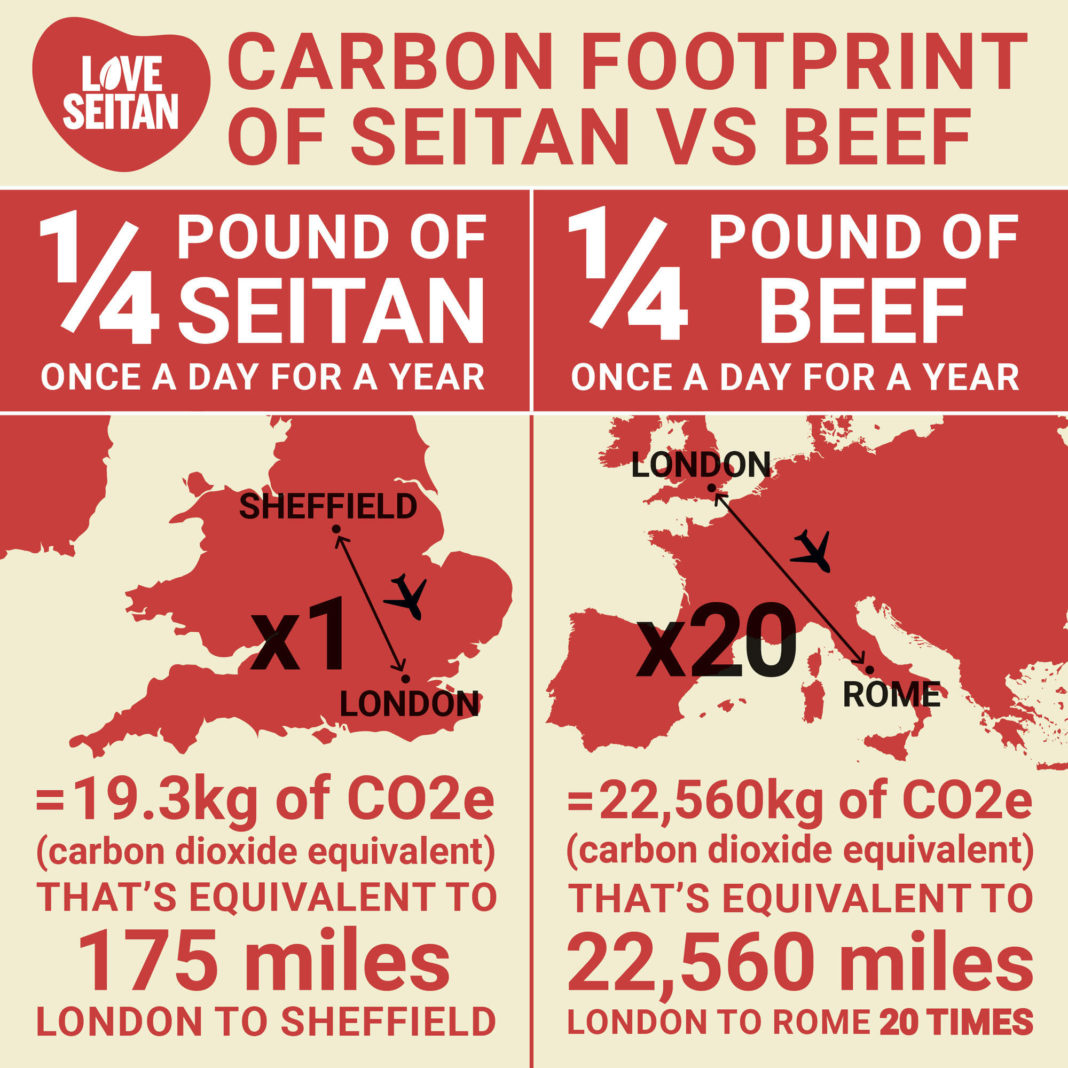 Eating a quarter-pound of beef once a day for a year is the equivalent of making 10 return flight trips from London to Rome, as opposed to the same amount of seitan, which equates to a single one-way flight from London to Sheffield.

The new research from Thrust Carbon, released by LoveSeitan, reveals that eating a quarter-pound of seitan every day instead of beef would save as much carbon as 10.6 return flights from London to Rome every year (22,560 miles). The total carbon footprint of eating a quarter-pounder burger made from seitan would be 19.3kg of CO2e, accounting for flying just 175 miles.

The average tree captures 20kg of CO2e every year. In contrast, the same amount of beef would equate to 2,483.4kg of CO2e. Seitan’s flight distance equivalent makes up for only 0.78% of the total distance for beef.

The analysis revealed that plant-based foods generally scored lower on the carbon footprint scale in comparison to animal products. Tofu produces 300kg of emissions per 100kg of product, while seitan produces just 46.6kg per 100kg. This supports previously released analysis that suggests seitan’s carbon footprint is 130 times lower than beef’s.

LoveSeitan said the figures will support the launch of World Seitan Day, which will be held on October 18, the birthday of George Ohsawa, who coined the term.

Steve Swindon, co-founder of LoveSeitan, said: “Now is the time to switch to more sustainable food sources. We can’t continue down this road where animal products are part of every meal. I don’t see how anyone could look at this data and not want to cut animal products, particularly beef, out of their diet. The evidence is clear and I hope it nudges people in the right direction towards a healthier, more sustainable diet that is kinder to animals.”

Anay Mridul
Anay is journalism graduate from City, University of London, he was a barista for three years, and never shuts up about coffee. He's passionate about coffee, plant-based milk, cooking, eating, veganism, writing about all that, profiling people, and the Oxford Comma. Originally from India, he went vegan in 2020, after attempting (and failing) Veganuary. He believes being environmentally conscious is a basic responsibility, and veganism is the best thing you can do to battle climate change. He gets lost at Whole Foods sometimes.
Previous articleWorld Animal Day is more important than ever
Next articleHow to not be tricked by misleading vegan-associated food labels and terminology