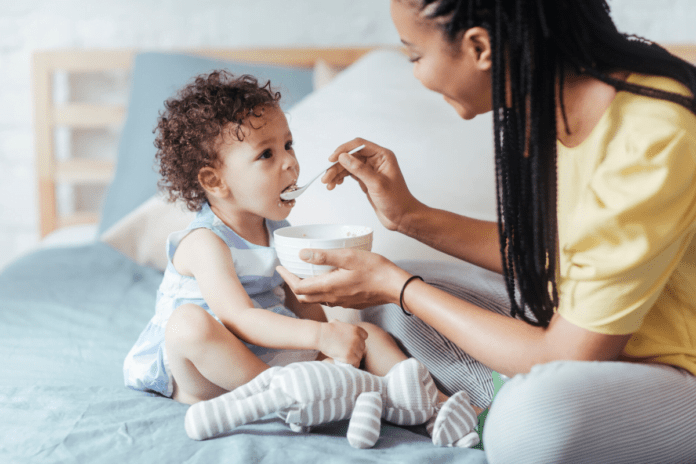 Some experts claim a vegan diet leads to nutrient deficiencies and faltering growth in children. But with 1 in 12 parents currently raising vegan children, plants provide more than we might think. Vegetables provide a necessary core to this diet, so how do we ensure our little ones learn to enjoy them more? Through effective ‘green weaning’.

From birth, babies are programmed to favour the taste of sweet things.

“We associate foods with ripeness and energy density, which tells our primary instinct that sweet foods such as breast milk provide enough energy to tackle the day,” explains Dr. Sophie Niedermaier-Patramani, in-house paediatrician and co-founder of Little Tummy.

But to raise our children on a balanced plant-based diet, it is vital they learn to enjoy vegetables too – as many of their nutrients cannot be found elsewhere. For this to happen, habits must be implemented from the very start, through patient green weaning.

Following the breastfeeding stage, infants begin the weaning transition, switching from their mother’s milk to their adult diet. By this time, babies’ tongues “will have developed more taste buds” so they are ready “to explore a wider variety of flavours,” says Dr Niedermaier-Patramani.

But with an inborn reaction to bitter flavours, she says it can sometimes take up to 15 tries for a baby to get used to this taste. Given how bitter some vegatbles are, especially when cooked until mushy enough for small mouths, green weaning is clearly a challengign process.

After seeing a gap in the market in 2018, plant-based baby food company Little Tummy, became the first to provide working parents with quick meals that introduce babies to the bitterness of vegetables.

Dr Niedermaier-Patramani believes it is “absolutely possible for babies to live a healthy vegan lifestyle”; provided their parents take extra care with “ready-made products such as mock meats”, and that they consume the necessary nutrients.

She emphasises the micronutrients that need more attention on a plant-based diet, like calcium, zinc, iodine and omega 3 fatty acids. Through dark green vegetables, chickpeas, lentils and rapeseed oil, Little Tummy cover everything. Their Cold Pressure method further ensures any “harmful bacteria” are inactivated and “all their nutrients are preserved”.

They strongly believe the “first 1000 days are critical” in getting babies in the habit of eating vegetables. They are not alone in their belief of green weaning.

Erick Vera, CEO and founder of plant-based baby food company, Little Inca, explains in the early stages of green weaning, “leafy greens support a baby’s increasing need for iron”. Getting them used to this flavour further avoids an over reliance on fruit, which is healthy, but draws that ‘want for sweetness’ back in.

Starting early also means children are better prepared for an increasingly open-minded and sustainably focused world. Mother and founder of Mamamade, Sophie M Baron, is raising her daughter mostly plant-based, hoping this will future proof her development for a planet that “is evolving to care more deeply about food sources”.

Mamamade is a plant-based company that sells food pouches for over 6-month-old babies that can be designed according to individual needs. It gives the option of steaming, mashing or pureeing its pouches, supplying a healthy, vital flexibility to parents.

Baron believes: “The more tastes and ingredients a child can be exposed to, the more confidence they will have with new foods as they grow older.”

While it is easier to make vegetables a habit from early on, Little Tummy states: “It’s never too late to start a good habit. It might just take a little longer.”

“It’s never too late to change your habits”

A classroom teacher who discovered the secret behind transforming children’s behaviour, Noel Janis-Norton is now a parenting author, speaker and coach, and strongly believes that no habit can go unbroken.

Many variables affect a child’s upbringing, from books, to TV shows, to the family members and friends around them. Janis-Norton says that much of child-targeted media mistakenly associates the consumption of vegetables to a chore. Older siblings’ comments can significantly alter a child’s perspective too. “Often children have absorbed the cultural view that vegetables are terrible,” she says.

Now the proud owner of Calmer, Easier, Happier Parenting, a program delivering effective parenting techniques, she offers 15 tips to feeding children effectively. Janis-Norton recounts how she has lost count of how many children she has seen start out “phobic about vegetables” who now eat “a big salad every day”.

She says parents cannot fully control everything in their child’s life, but they can influence. Research shows if mothers consume a lot of a type of food, their breast milk will contain those particular flavours.

To a certain extent, “we can replicate that by taking the water that vegetables are cooked in and adding a bit of that vegetable-flavoured water to any liquid that the child consumes, such as porridge, or juice, or a glass of water,” she says.

While there is no certainty this will make infants more likely to enjoy vegetables, it is a good start to a more in-depth green weaning process.

According to Janis-Norton, misbehaviour and what a child is fed are very linked.

One of the hardest issues parents face is when their child has developed a phobia of vegetables. This is especially difficult when they won’t eat foods that are touching.

“When two foods are touching and they have [different textures], it’s confusing to the young child’s mouth, they aren’t sure whether to chew, or slurp,” she states. But this fear can be overcome.

The “First Plate” method, where each meal begins with a plate of miniscule “amounts of each food the child doesn’t love”. Is her most recommended approach in these circumstances.

Often, when a child is being forced to consume something, this leads to protest. But “routines reduce resistance”. Praising your children with words like “adventurous”, they will be more motivated. With further parental experimentation, their behaviour also improves.

“Persistence” is Baron’s number one tip. Vegetables can cooked in many ways, and with additions like spices or aromatics. They can offered to children on a regular basis without boring them.

“Ultimately, it’s about getting them over the fear of what they think is going to kill them,” Janis-Norton concludes.

If not done well, a plant-based diet, like all diets, can restrict a child’s growth.

But successful veganism, with a rich supply of vegetables, can ultimately reduce risks of cardiovascular diseases, cancer, and many similar illnesses in later life.

Alongside vegetables, Little Inca uses quinoa as their key ingredient. A proven super food, quinoa is also a ‘pre-biotic’, contains the nine essential amino acids, and is a complete protein.

For efficient development, babies need a variety of proteins. And the EU further recommends a daily consumption of 10g of fibre. Thus, using quinoa as its star, Little Inca are able to ensure babies have a very healthy gut.

In the first year of life, postnatal brain development is at its most critical point.

With the right nutrients, a plant-based diet can also fend off erratic behaviour and other mental issues.

Vera says a link has established between gut health and disorders of the central nervous system. Anxiety and depression are among these. But he adds that an “altered microbial composition of the gut has been reported in children with autism. And has linked to childhood temperament” too.

What is stopping people?

While evidence shows children can grow into healthy adults on a vegetable rich, plant-based diet, some might disagree.

Dr Niedermaier-Patramani says the common perception that animal products are vital to a wholesome diet “stems from a time. When it was difficult to include certain micronutrients into a vegan diet”.

Baron understands this viewpoint. She states: “Many parents feel strongly that their children must exposed to every food. Both from a flavour and nutrient-based perspective.”

The mother says caregivers may believe this is causing some type of limit on their diet. But she adds that by “arming themselves with knowledge”, it possible to raise a child plant-based. “It takes a bit of extra work, but it’s worth it!”