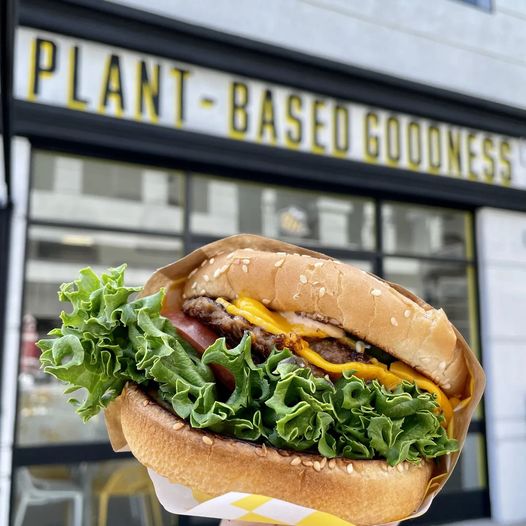 Honeybee Burger is to open a flagship location in Venice, California on 22 April. Perfect timing for Earth Day!

Venice has typically been a great venue for dining, retail and tourism and has a particularly strong vegan dining market, hence the move by the company. In fact, California itself made it into the top ten most vegan-friendly US states. And in addition, Honeybee Burger’s new space will be located at 326 Lincoln Boulevard so only one block away from the busiest Whole Foods Market in all of Southern California.

As an organisation, Honeybee was launched in Los Angeles by a group of passionate foodies and investors. Their goal was to create the first all plant-based quick serve restaurant (QSR) in the industry.

This latest Honeybee diner will seat over 30 people and is decorated in the classic honeybee shades of black and yellow. For convenience, you will find plenty of customer parking at the back of the restaurant with dedicated spaces for delivery drivers.

Previously investing in Cafe Gratitude, the founder of Honeybee Burger, Adam Weiss, is from Los Angeles and knows Venice well. Weiss specifically chose to open this latest location on 22 April for Earth Day because of the significance for Honeybee and its commitment to sustainability and environmental issues.

Earth Day has been celebrated each year since 1970. It is used to highlight global and environmental issues. And today, Earth Day is widely recognised by many as the largest secular observance in the world. It is thought to be marked by more than a billion people every year as a day of action to change human behaviour and to encourage global, national and local policy change.

On launch day there will be various special announcements in honour of Earth Day, including the debut of the world’s first bio-identical vegan honey from Meli-Bio. In addition, the Los Angeles debut of Ripple soft serve which features in Honeybee’s popular milkshakes.

100% plant-based, Honeybee Burger also has a gluten free menu. With tempting burgers such as the Honeybee, the Queen Bee and the new Hot Hunny Chick-A-Bee, we can’t wait to give it a try.

Alice Soule
Alice Soule is a Writer and Editor, and graduated with a BA in Social Policy. She is passionate about veganism and animal rights but equally has a love of sports, reading, and drinking tea. Alice is a perpetual dreamer and recently finished writing her first novel. As yet to be published...because she's already dreaming up the next story...
Previous articleOmakaseed at Plant Bar opening in New York City
Next articleMeatless Farm survey discovers most put off by “vegan” terminology