Ricky Gervais and his long history of animal activism 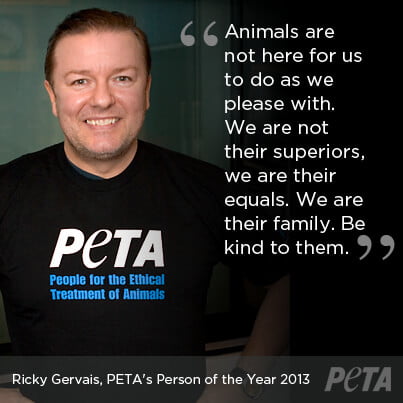 There have been many questions on whether or not actor, comedian, writer, producer and director Ricky Dene Gervais is vegan. With all his advocacy against animal abuse and even receiving a particular award that many vegan activists have received, it is easy to assume that Gervais lives a vegan lifestyle, however, it is not 100% confirmed whether the ‘Office’ star follows the vegan diet or not.

One thing that is confirmed is that Gervais does not eat meat, but whether the actor has sworn off animal products like cheese and eggs is unknown. In an episode of ‘Hot Ones’ (where interviewees answer questions while eating spicy wings), a writer at Veo noticed how Gervais said he ‘used to have’ cheese, mature cheddar being his preference. The writer also revealed in an ‘FAQ’ on his Instagram that the fish fingers his character ‘Tony’ ate in the Netflix series ‘After Life’ were vegan. So does Ricky Gervais follow a vegan diet? 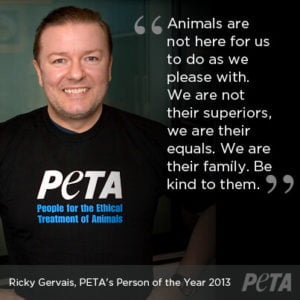 Despite clarification on whether or not the Golden Globe winner is strictly plant-based or not, he is a huge advocate for animal rights. He was given the PETA Person of the Year Award in 2013 for his frequent posting of animal rights issues, his hatred for animal cruelty and his refusal to eat meat on social media. The association called the actor’s posts ‘witty and irreverent – yet relevant’ and had also caught the eye of The Humane Society International (HSI) as back in 2018, Gervais was The Cecil Award for ‘his global advocacy against trophy hunting’. The society mentions the star’s vociferously towards his opposition against trophy hunting, including leading an outcry against the killing of Cecil, the lion, who was killed by hunters in 2015.

In the same year, the comedian has worked with HSI to put an end to the Lychee and Dog Meat Festival – a celebration held in Yulin, Guanxi, China where festival goers eat dog meat and lychees. The society named a dog, saved from a Yulin slaughterhouse, after Gervais to honour him for his part in rescuing the animals. The comedian was vocal on his Twitter about his disgust of the festival, with one post featuring a photo of him and a dog captioned: ‘Please help stop the #YulinDogMeatFestival’, followed by a petition on change.org. He also critiqued the belief behind the dogs needing to be tortured to enhance their taste. Another post spoke of the videos he watched of the animals being abused – that were captured by the HIS – and shared graphic imagery of the dogs being tortured as well.

Gervais has also defended animal rights outside of social media as well. In an interview with Radio 5 Live, the actor explained how animal testing should end as ‘it doesn’t work’ because ‘ninety-three per cent of all experiments that work on animals then fail and are dangerous on humans’. He also said computer models are a better method to test products.

The After Life star was also among thirty celebrities who fought for a ‘fur-free Britain’. The stars wrote a letter to the UK government, urging for fur imports to be banned after Brexit. They also spoke of the cruelty behind the fur trade including animals being ‘electrocuted, gassed, caught in leg-hold traps for days and skinned alive’ – other celebrities to sign the letter include Alesha Dixon, Paloma Faith and Sir Andy Murry OBE.

In light of COVID-19, the director urged people to refrain from eating meat and expressed his anger towards wet markets, where it is widely believed the virus originated from. Gervais told the Mirror how ‘we can’t carry on exploiting animals, eating wildlife and trashing the planet’, or else another pandemic will emerge. He also said how ‘horrified’ he was by the Sunday Mirror’s snaps of animals being sold on a street in North Sulawesi, Indonesia and questioned ‘how bad’ does the situation need to get before the wet markets are shut down.

Although Ricky Gervais has not officially confirmed whether he is vegan or not, it can be agreed that the actor has done a lot to help spread awareness of the backdoors of the animal industry and has helped save some animals while doing so.

Anam Alam
Anam is a freelance writer for The Vegan Review and a student studying journalism. She is a passionate writer who possesses a range of skills ranging from audio, video, editorial and creative writing. Her goal is to educate the public and the world with stories that she feels need to be talked more about in society.
Previous articleMaggie Baird And The Support + Feed Initiative
Next articleGreggs vegan success a delight for pastry fans