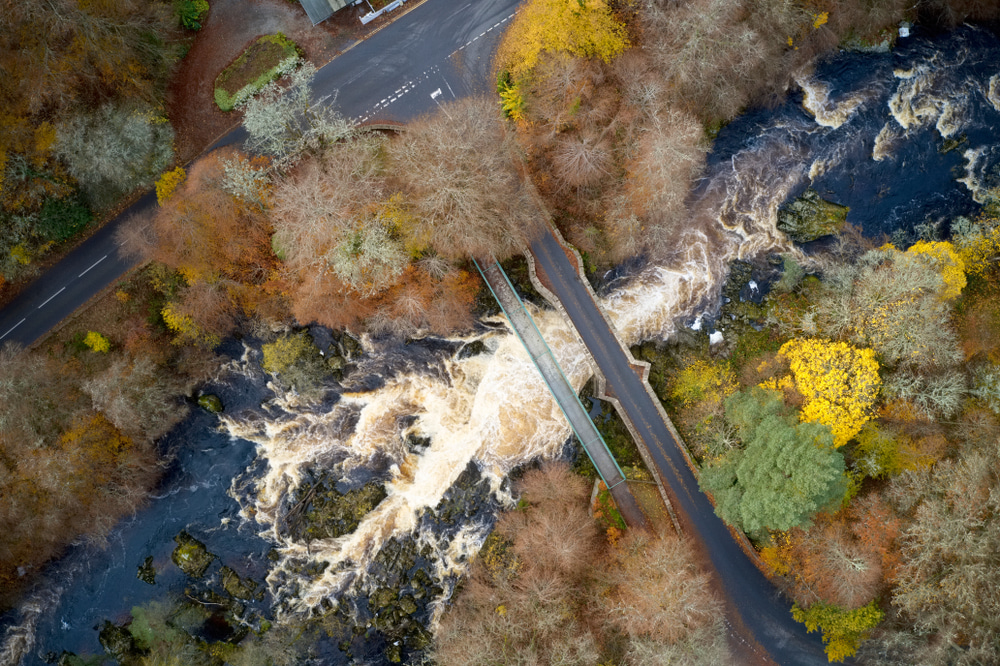 While the UK government has promised to protect 30% of its land by 2030, the Scottish Rewilding Alliance wants a bolder step in a milestone year for the Earth.

Recently, the World Wide Fund published warning about the poor state of freshwater fish worldwide: at least 80 species have become extinct in the last 16 years. It may well be a result of pollution and overfishing. But Scotland has a different approach. The Scottish Rewilding Alliance is calling for the rewilding of 30% of Scottish land and sea in a decade. With that, it wants to become the first ‘Rewilding Nation’.

In 2012, the Rottal Burn, one of the primary spawning tributaries of the South Esk, was returned to its natural itinerary. By adding large woody debris, along with new tree planting, the river soon looked much wilder.

Craig MacIntyre, director at the Esk Rivers & Fisheries Trust, was satisfied with the final outcome: “The Rottal obviously looks much more interesting now with trees and wildflowers, but from a biological perspective, we’re simply seeing more fish. The densities of salmon fry are five times what they were, and the complexity of the river now allows salmon, at different stages of their life, access to food and shelter.”

A post shared by SCOTLAND: The Big Picture (@scotlandtbp)

Now, ahead of the United Nations Climate Change Conference (COP26), to be held in Glasgow in November, the Scottish Rewilding Alliance is gathering more than 20 conservation organisations. It has begun a campaign to ask the Scottish government to pledge commitment to its wildlife and countryside.

Steve Micklewright, convenor of the Scottish Rewilding Alliance and chief executive of Trees for Life, said earlier this week: “The world faces overlapping nature, climate and health crises, but Scotland has the opportunity to show bold leadership by becoming the world’s first ‘Rewilding Nation’. We have space, political influence and public backing to become a world leader in saving nature and ourselves.”

Read our story about Rewilding Britain.

The campaign kickstarted with an inspiring video narrated by wildlife presenter Gordon Buchanan showing how to rewild can help nature, wildlife and people.

Rewilding is slightly different from traditional nature conservation. The latter tries to save fragmented areas to protect wildlife, while the former recognises nature’s power to heal itself.

Richard Bunting, a spokesperson from the Scottish Rewilding Alliance, says: “Working hand in hand with traditional nature conservation, rewilding is looking to reverse this catastrophic loss and allow nature to flourish across much larger, better connected, and much more resilient areas.”

Dr Arash Ghoddousi introduced the concept of anthropogenic resistance, which is the impact of human behaviour on species’ movement through a landscape. This resistance can result against or in favour of wildlife hunting, like creating bird feeding stations in the garden.

Unfortunately, due to production, development or security, the outcome usually is against nature and threatens wildlife via habitat fragmentation. Insufficient connectivity means population viability, and ultimately species persistence. Hence, Ghoddousy recommends creating ‘green corridors’ to help the interconnectivity of species and their movement.

In nature, everything is connected. Dams built by beavers will help redirect rivers and aquatic flows, which will help insects and aquatic creatures, which in turn will feed birds and fish.

A post shared by SCOTLAND: The Big Picture (@scotlandtbp)

The 30% of land targeted by the Scottish Rewilding Alliance includes restoring and expanding woodlands, moorlands, peatlands, rivers and marine habitats. It can happen without the loss of productive agricultural or urban land, claims Bunting. Rewilding “is often cheaper than traditional conservation approaches”. “Less management is needed compared with many conservation approaches, making it more affordable and therefore sustainable,” he explains.

Furthermore, the Alliance is calling to make rewilding the third pillar of Scotland’s economic strategy. It offers the example of the reintroduction of Lynx. The current absence of such predators means we currently spend millions fencing off land to prevent deer browsing on young trees grown for forestry.

An opinion poll carried by Survation shows that 76% of Scotts support rewilding. So, this Anthropogenic Resistance seems to be, for once, on the wildlife’s side. Within the UN’s Decade on Ecosystem Restoration, it’s time to take action.

Juanele Villanueva
Juanele Villanueva is a freelance journalist passionated with Environment Affairs. He is originally from Spain and started to be interested in the Environment and sustainability when he was in his masters at the University of Salford. His goal is to share stories which change the general belief that being eco-friendly is just for wealthy people. Moreover, the vegan diet is the easiest step that everyone can do to reduce its environmental footprint. He is also interested in conservationism, recycling, renewable energies and environmental policies
Previous articleScotland to add plant-based milk to free nursery milk scheme
Next articleProVeg and Beyond Animal team up for a plant-based investment conference