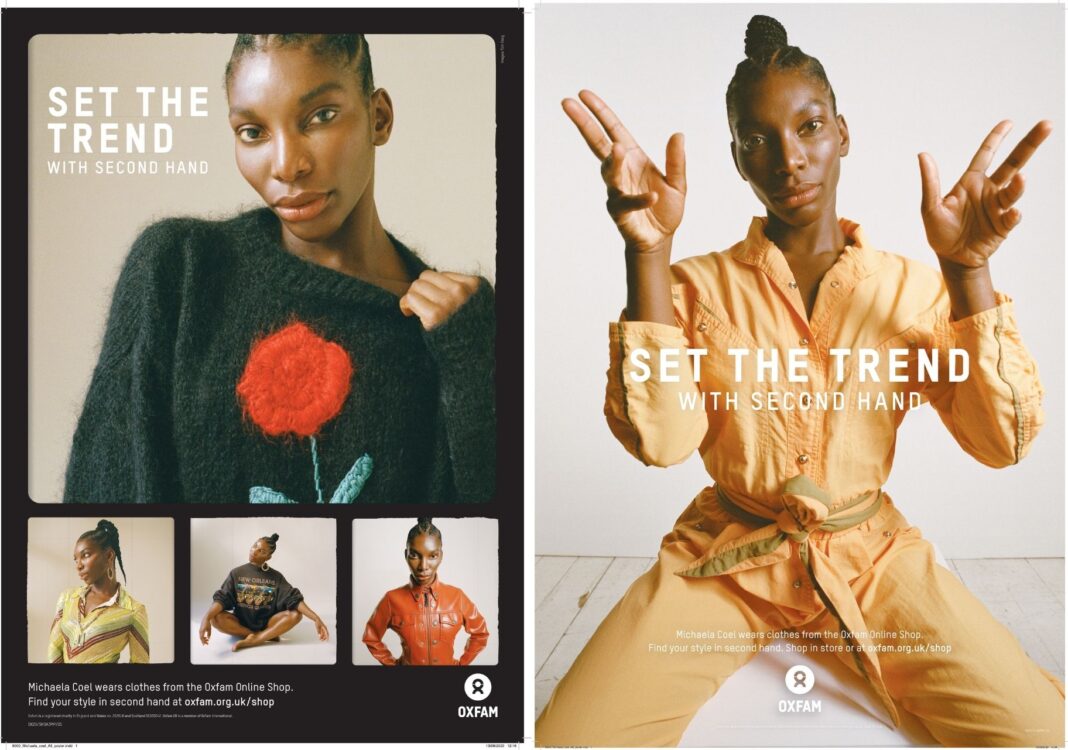 Oxfam launched Second Hand September in 2019 to encourage people to thrift-shop clothing and household items, while raising awareness about the devastating effects of fast fashion. This year, #SecondHandSeptember has been trending across social media, with many influencers sharing their top tips to shop sustainably this September.

This year, Oxfam is encouraging shoppers to exclusively purchase secondhand clothes for the month of September. The charity has recruited BAFTA award-winning actress, director and screenwriter Michaela Coel as the poster girl for the 2020 Second Hand September campaign.

Coel’s poster campaign is present in over 500 Oxfam window displays, where she is sporting clothing from the Oxfam online shop, which is available to purchase for four weeks from September 7 from the Oxfam pop-up shop in the Selfridges London Designer Galleries.

A variety of external institutions are supporting Oxfam’s Second Hand September campaign, such as Selfridges, eBay and Vestiaire Collective.

The profits from the Second Hand September campaign will support Oxfam’s ongoing aim to end worldwide poverty. Each year, Oxfam receives around £29 million from clothing sold in its shops, which the charity says is enough to provide clean water for over 2 million people throughout a drought.

Oxfam GB chief executive Danny Sriskandaraiah outlines the consequences and opportunities that have arisen due to the Covid-19 pandemic: “The pandemic poses huge challenges, but it also creates an opportunity to reimagine our economies and how we live, to make lasting changes that set us on track to a fairer, healthier world.”

Sriskandaraiah emphasises the importance of supporting sustainable fashion. “We can send a message to retailers asking them to change their business models to better protect the people who make our clothes and the planet we all share.”

The issue with fast fashion

The high street exhibits a vast variety of fast fashion outlets, offering shoppers the seasonal trends at affordable prices. The UK is the epicentre of fast fashion consumption in Europe, with each individual purchasing an estimated 26.7kg of clothing every year.

The growing demand for fast fashion has created an array of environmental consequences. There has been a sharp increase in the inclusion of synthetic fibres, such as polyester, in clothing, with rates rising to 60% in 2019. When washed, the synthetic fibres release microplastics into the water system, contributing towards the half a million microplastics that are released into our oceans annually.

Alongside the environmental effects of the fast fashion industry, an array of ethical issues have arisen. A recent investigation into a Leicester sweatshop uncovered the unethical truth behind the manufacturing of clothes in the UK. The charity Labour Behind the Label published a report in June 2020, revealing that the Bohoo workshops in Leicester remained open during the pandemic. In addition, an investigation by The Sunday Times discovered that employees at the Nasty Gal factory (owned by Bohoo) were earning as little as £3.50 an hour.

Influencers and bloggers have been sharing their sustainable shopping advice across social media this September. The hashtag #SecondHandSeptember has over 70,000 posts on Instagram, with reels, videos and posts showcasing outfit ideas, shopping advice and fast fashion facts to inspire and inform people about the campaign.

Elizabeth Teo, the face behind @zerowastecutie, is a self-proclaimed “environmental educator”, and has made it her mission to share her zero-waste journey as well as easy to understand facts and figures about the fast fashion industry. Teo explains that, as a former “avid shopaholic”, she has woken up to the damaging impact of the industry, and wishes she was “made more aware of all the dark issues behind fast fashion”.

Sharing stark statements about the industry, Teo says: “If you support fast fashion, you are also supporting child trafficking. Sweatshops do not alleviate poverty. These children are forced to work there.” In addition, she adds that “one in five children” in Asia, the Pacific and Africa, are involved in child labour.

Choosing to shop secondhand, Teo shares her love for thrifting: “I find it more thrilling than going to the mall, you never know what treasures you will find.” Moreover, she claims that shopping secondhand allows her to divest fast fashion brands that are “often owned by very powerful and wealthy white males who couldn’t care less about us or the environment”.

The fast fashion industry often entices students and young people alike, offering student discounts, celebrity-endorsed campaigns and frequent sales. Instagrammer Emily Timson shares an array of sustainable fashion outfits, showcasing a collection of secondhand pieces that she has thrift-shopped and reworked. Despite always having a passion for charity shops, Timson explains that during her sixth form, she became a massive fast fashion consumer; she would purchase a “scarily big haul” of clothes, spending “£200 at a time on Missguided and Pretty Little Thing”.

After starting university last year, Timson vowed to reduce her fast fashion consumption. “I’d often ignored posts or YouTube videos in my suggestions about fast fashion, probably out of guilt as I was ashamed I was supporting the industry so much,” she says. “But eventually, I gave in and started researching it more, and was shocked by the detrimental effects it was having on human rights and the environment. And as a vegan, it really felt like a conflict of interests.”

Encouraging others to shop second hand, Timson says the planet is suffering: “The fashion sector is such a huge polluter to our planet, about 10% of the world’s carbon emissions are from fashion.” Advising those considering participating in Second Hand September, Timson says: “Shopping secondhand can initially be a bit daunting, but the more you get used to it and find out the tricks of the trade, the more fabulous clothes you’ll find, and the less and less you’ll find yourself desiring items from fast fashion brands.”

Anna Fox
Anna is a journalism undergraduate at City, University of London, who as a keen sportswoman, is fascinated by the effects a vegan diet has on athletic performance. Motivated by the Netflix documentary ‘Game Changers’, she is keen to continue her research into veganism and its significance within sport. Lover of all things Lush; a kimchi convert, and an animal admirer, Anna’s strong will and passion for the planet, will have you questioning that beefy Bolognese.
Previous article6 traditional Pakistani dishes that happen to be vegan
Next articleJasmine Briones and Chris Petrellese: The vegan couple promoting sweet and simple living