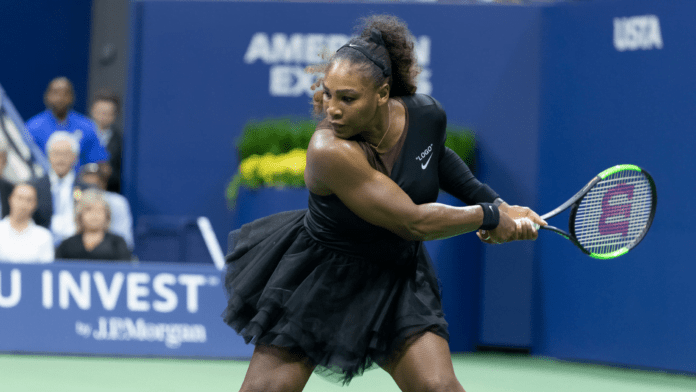 For most, Serena Williams needs no introduction. The American tennis icon has captivated our attention for more than two decades with top-notch performances that resulted in a record number of 23 Grand Slam titles, including the 2017 Australian Open. She is rightly celebrated as one of the greatest tennis players of all times, and there is a lot more to her.

The Olympian, who is also a mother, a wife, and a successful entrepreneur, has not just left her mark on the tennis court, but also on the fashion industry with her very own clothing line that features vegan-leather garments.

Earlier this year in February, Williams’ unveiled the S by Selena Spring 2020 collection, her newest addition to her very-own fashion line called Serena. The ready-to-wear collection, which was inspired by her travels to Africa, offers a chic, yet tropical vibe with a number of white and golden sequin pieces, giraffe-printed dresses, and vegan-leather blazers and pants.

Although Serena Williams is best known for playing (and dominating) sports, the tennis champion also admits her longtime love for fashion in a video that is available on her website: “I went to fashion school, I like to say, in-between winning Wimbledon’s and Us Opens, and it was fun. It was a lot of work and it was really hectic, but I had a passion for it.”

Designed to inspire all women (and men), her affordable clothing line looks good on all shapes and sizes and all pieces are available for under £250. Serena Williams clearly has an eye for fashion, but she is also committed to sustainably and saving the plant.

Speaking directly to Essence, Williams said: “I was thinking of some of my favorite places 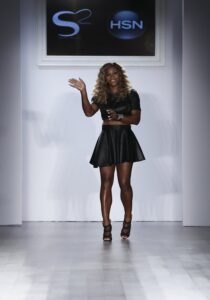 to travel, which ultimately when I thought about it, was Africa. That’s where I got the giraffe print from. And then also the vegan leather because I feel like a lot of things are being killed and we’re not saving the earth. We can all just do one small thing and help out so that was also a lot of our inspiration.”

In the video of the launch of her collection, Williams also told Vogue and her audience: “We have some vegan leather options, because I really believe in sustainability, and it’s our future.”

Is Serena Williams a vegan?

Serena Williams has been at the top of her game for nearly 20 years, and she locks healthier than ever. Like any athlete, the tennis legend has to fuel her body with the right choice of food and her secret to endless power and strength seems to lie in eating a ‘mostly plant-based diet’.

According to Healthista, the mother of her two and a half years old daughter, Alexis Olympia, follows a raw vegan diet and eats no sugar during tennis season. In addition, she is said to have temporarily adopted a plant-based diet to support her sister, Venus Williams, who went vegan after being diagnosed with Sjögren’s syndrome, which is an autoimmune disorder that can cause joint pain, digestive issues and excessive fatigue.

Although Serena Williams may not be 100% vegan, a plant-based lifestyle seems to be a hot topic in her household. Her husband, Alexis Ohanian, who made the headlines last week with his resignation from the Reddit board in support of Black Lives Matter, is also said to be vegan for health reasons. According to The Beet, the successful entrepreneur decided to ditch meat after watching an early cut of The Game Changers documentary and became an investor at Impossible Foods. For Serena Williams’ family a vegan life seems to work perfectly and her vegan-leather garments are a not just easy on the eye but also good for the animals.