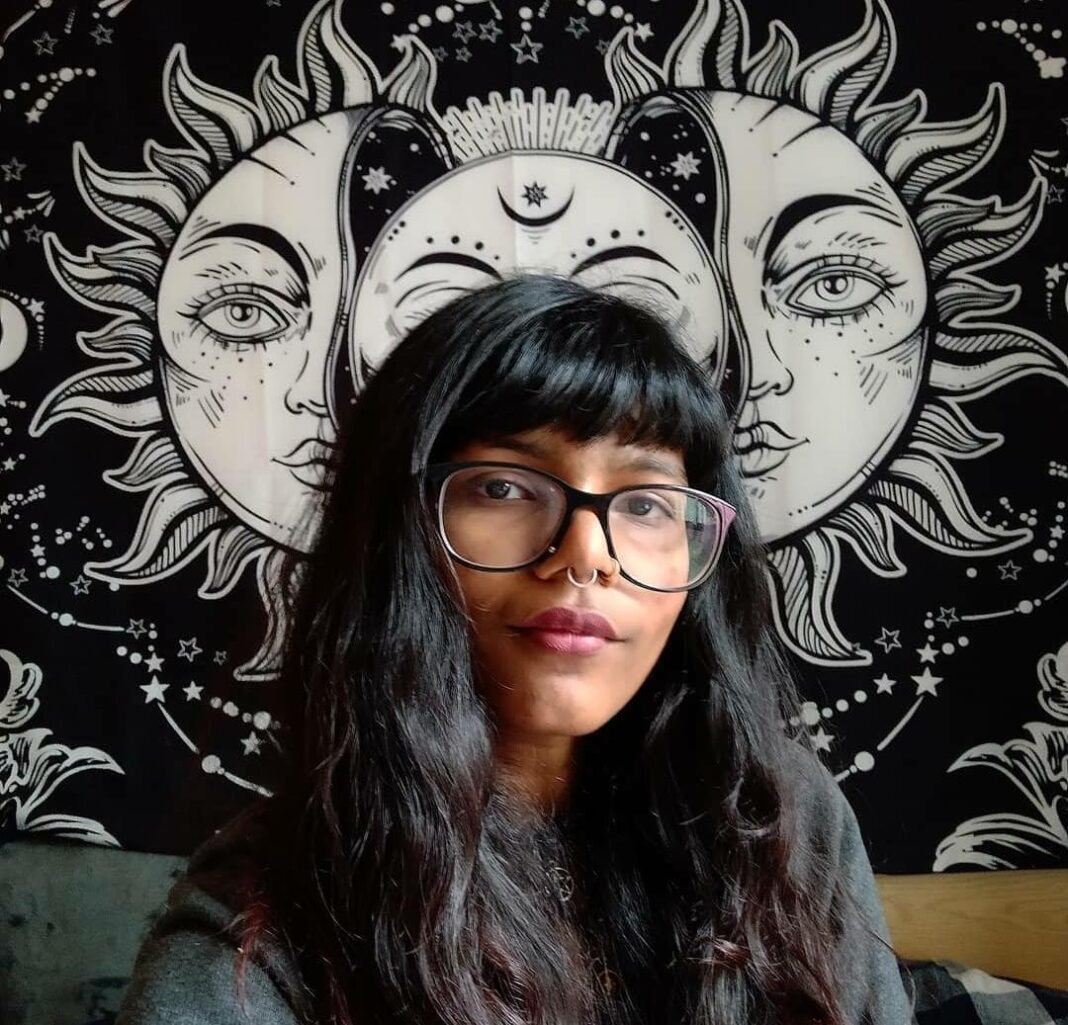 20-year-old Siddhi Gadhi talks writing recipe e-book Vegan Up! to fundraise for the NHS, plant-parenting and overcoming an eating disorder.

A third-year student of product design at Edinburgh Napier University, Siddhi Ghadi goes by several different identifiers — plant-based enthusiast, plant-mom, and artist at the forefront. With the launch of her new vegan recipe ebook, she can now add ‘author’ to the list.

Hailing from India and based in the UK, the 20-year-old tells me about her foray into veganism, her struggle with an eating disorder and her relationship with plants and spirituality.

Like most people, Ghadi’s initial transition to veganism was rocky. “Initially, I was trying to go vegan because of the health benefits,” she says. Moving to a different country and living alone as a student for the first time is never easy. Ghadi noticed her newfound lifestyle taking a toll on her physical and mental health. She particularly noted how it negatively impacted her diet. “I thought that veganism would be a good place to start in order to get my health back,” she recalls.

Inadvertently, her shift to ‘veganism’ was met with irregularity and inconsistency. She found it hard to keep up: “I’d have cheat days and meals and wasn’t committing to the cause.” That was, she reveals, until she took up spirituality as a serious part of her life, which helped her understand and commit to the vegan lifestyle for what she believed to be a better world and satisfying for her own mind and body.

Spirituality is now firmly placed in mainstream culture, but Ghadi’s interest in spirituality began early on. “I have always been inclined to spirituality thanks to my father,” she says. “I began practicing Wicca last year, which is the worship of nature, seasons and the universe.” Wicca is a belief system, informed by pre-Christian traditions originating in Ireland, Scotland, and Wales, that promotes free thought and will of the individual, and encourages learning and an understanding of the earth and nature.

The main themes around Wicca are compassion, kindness and love. It teaches you to do the best you can as long as you don’t cause any harm to yourself or anyone else. “I credit my spiritual practice for helping me commit to veganism, as it taught me how life is equal no matter how small, and every living thing has the right to live peacefully. If I have not created life, I have no right to take it away for my own wants, and this really made me relate to the universe and its beings so much better,” she says.

Ghadi adds: “The vegan lifestyle is so beneficial, not just to the environment and animals, but also to the mind, body and soul. It has taught me to be a better person, more compassionate and loving. We can’t force people on what to and not to eat, but all I can ask is that everyone think and make conscious choices over that consumption of any product.”

Ghadi, however, rejects the idea of perfectionism and vegan extremism: “The world doesn’t need everyone to be perfect vegans, what we need is everyone coming together and contributing and addressing the issue in the best way they can with kindness.”

She also remarks on the difference between practising veganism in India as opposed to the Western side of the world: “I only discovered how impactful being a vegan is when I moved to the UK two years ago. The meat and dairy alternatives available here are easily accessible.”

While India’s vegan scene is relatively new and vegan alternatives might not be as easily available, she does acknowledge the plethora of whole foods readily available in a standard South Asian kitchen that are already vegan: “I personally prefer to stick to whole, non-processed, clean foods, and such fresh produce is easily available in India (even if the alternatives aren’t). I think if you are committed to a cause for the right reasons, it is definitely possible to adopt veganism in India,” she affirms.

Check out our guide to traditional South Indian vegan superfoods.

Ghadi isn’t just a plant-based enthusiast, but also a plant enthusiast. “Again, I have to say my love of plants comes from my dad,” she says. It was only when she moved into her apartment about a year ago that she was able to explore her green thumb. “Last year, I discovered that taking care of plants and helping them grow is extremely fulfilling. The best part about growing plants is the feeling of knowing that something relies on you for nourishment. That gives you a great sense and understanding of love and kindness,” she notes. 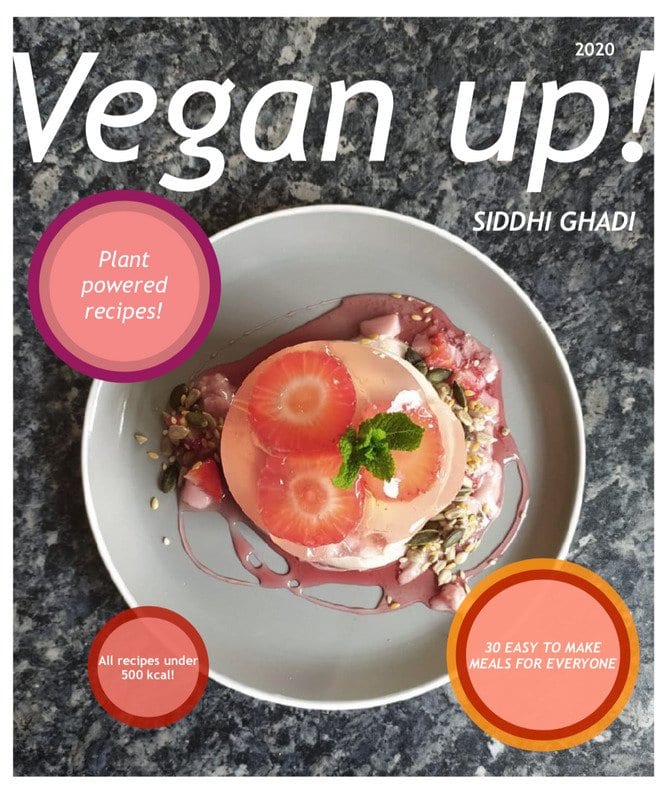 She currently lives with her 35 plants that have offered her comfort and support through a number of mental health struggles. “They have provided me with the kind of company I never thought I needed — of silence and growth.” Siddhi also receives several messages from people asking for advice about their plants. “To anyone who messages me about their plants and for advice, I would say love and talk to your plant babies. Encourage them to grow. Look after them as you would like to be taken care of. In doing so, you will increase your own vibration,” she advises.

Recently, Ghadi took to her Instagram to document her recovery from an eating disorder, which she suffered for about eight to 10 years of her life. It was only in July 2020 that she finally decided that she wasn’t going to let her disorder control her life. Opening up about her struggles, she tells me: “I decided to start working on my eating disorder recovery as I had pretty much hit rock bottom, mentally. It was controlling every aspect of my life and I knew I had to get out of the vicious cycle of restricting, eating, purging, weighing myself 20 times a day, fasting, counting calories, etc.”

That’s when she started her All In journey. Popularised by Youtuber Stephanie Buttermore in 2019, All In is an approach to intuitive eating that focuses on nourishment, eating without restriction and relearning hunger and satiety cues. Ghadi’s experience entailed eating her meals with no calorie restriction while still maintaining a predominantly whole food and plant-based diet. “I am three months in, and I have never felt this free in the last 10 years. I gained more confidence than weight and that’s all I needed,” she says.

I ask her about the controversy surrounding veganism and intuitive eating. “Veganism can be restrictive if you aren’t doing it right. A lot of people assume all we eat are salads, but in reality, there’s a huge variety of meals that are so delicious and filling. At the end of the day, any diet can be restrictive or unhealthy (yes, even veganism), it is about how you do your research, and what products you consume.”

At 20, Gadhi has released Vegan Up!, her first vegan recipe e-book. After the pandemic hit, she claims to have seen a lot of her friends still working as key workers, and simply felt like she had to contribute towards the crisis in her own way. After experimenting with a ton of vegan dishes this past year, Ghadi began documenting them with her recipes and pictures. It suddenly clicked to her that she could just compile them into an ebook and raise money for the cause.

She started cooking a lot more over lockdown, which helped add fun and flavour to her book. “I’ve always been pretty decent at making these massive salad and soup bowls, and after a while, you just know what combination works and what doesn’t,” she says. She shares her personal favourite creation: “My favourite recipe would have to be the three-way chickpea and mango salad. It’s just the perfect summer salad with a lot of fresh produce and protein.”

Nadine Monteiro
Nadine is a Liberal Arts student at Leiden University at The Hague, with a passion for anthropology, sustainable development, and human rights. Dabbling in the fields of content creation and journalism led her to The Vegan Review where she explores her enthusiasm for health and nutrition. She is a strong advocate for body acceptance and Health and Every Size (HAES) and aims to bring more representation of body diversity into the mainstream. You're most likely to catch her either on a new travel adventure, knee-deep into an obscure podcast or attempting to make homemade nut butters - there is no in-between.
Previous articleShort film Casa de Carne leaves you wanting a kinder world
Next articleWorld Vegan Month: Being plant-based in Israel