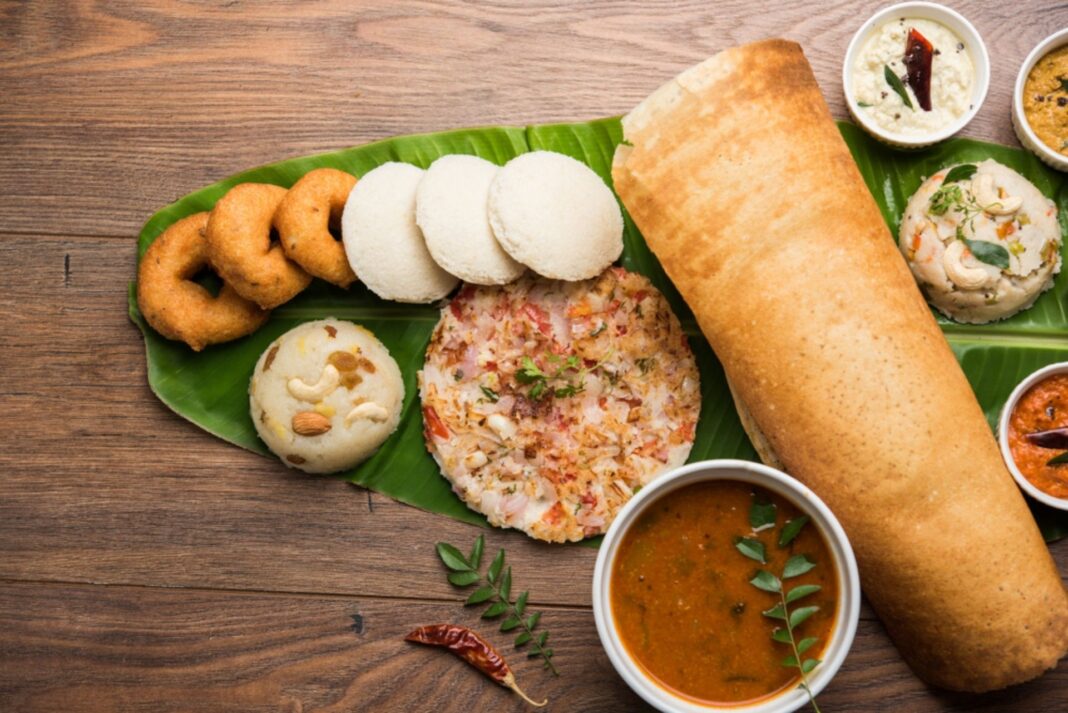 South Indian cuisine is a global favourite. But its heavy dependence on plant-based ingredients is understated. Here’s why South India is a vegan paradise.

Nestled between the eastern and western ghats and tucked neatly into the Indian peninsula, are the states of Karnataka, Tamil Nadu, Kerala, Andhra Pradesh, and Telangana — encompassing the territory of South India. All states, although politically and culturally diverse, are bound together by their rich Dravidian heritage, which sets them apart from the rest of India.

Today, when we think of South India, we think of three things: the captivating cadences of Carnatic music, rocketing popularity of its regional cinema, and most importantly, the fresh yet flavourful landscape of food.

While a significant part of India’s population is vegetarian due to different traditional/religious beliefs, for a vegan, South India is paradise. In a standard vegetarian diet, dairy products like butter, ghee, and paneer are consumed abundantly in the North. While the journey of conscious veganism is yet to transition from the fringe into the mainstream in India, a major part of South Indian cuisine is already vegan without even trying.

If you’re thinking dosas, idli and sambar rice, and how healthy or sustainable it is to adhere to this carb-heavy diet, you can set your worries aside, because South Indian food ranks high in its overall nutritional value and moreover has the two most controversial ‘P’ words in the vegan community covered: protein and probiotics.

Delhi-based dietitian Kavita Devgan, in an interview with India Today, talked about the health benefits of South Indian cuisine owing to most of the foods being fermented. She said fermented food items have three great advantages over other food items: they are easier to digest, have a higher nutritional value, and they give a boost to gut health.

India is the second-largest fruit producer in the world. The tropical climate in Southern India, particularly, allows for the growth of an impressive variety of exotic tropical fruits. Mangoes, pineapples and citrus fruits are grown in abundance, in addition to several other local fruits that are collected from the wild and eaten mostly by the locals. Fruits are an essential part of a vegan diet as they provide antioxidants and other beneficial plant compounds. 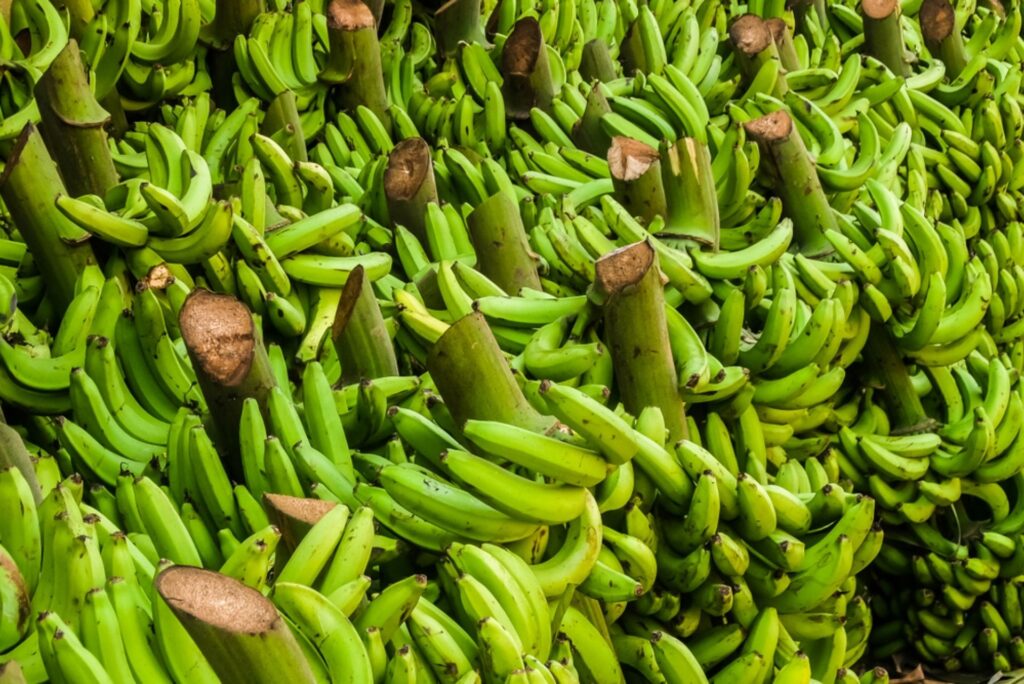 Revered as a symbol of prosperity and fertility, bananas and plantains are extremely important in South India’s social as well as culinary fabric. You may have heard of those delicious crispy Kerala banana chips, but bananas are used for so much more. Added in a variety of dishes ranging from aromatic curries, flavourful stews, rich desserts, and fried snackables, bananas are highly adaptable.

They are also high in potassium, vitamin C, and fibre, and help stabilise blood sugar levels. If you’re looking to switch up your sweet potato chips or potato curries for something starchy and equally satiating if not more, try experimenting with plantains. Traditionally banana leaves are also used as plates on which to eat the food, which is both economical and sustainable. 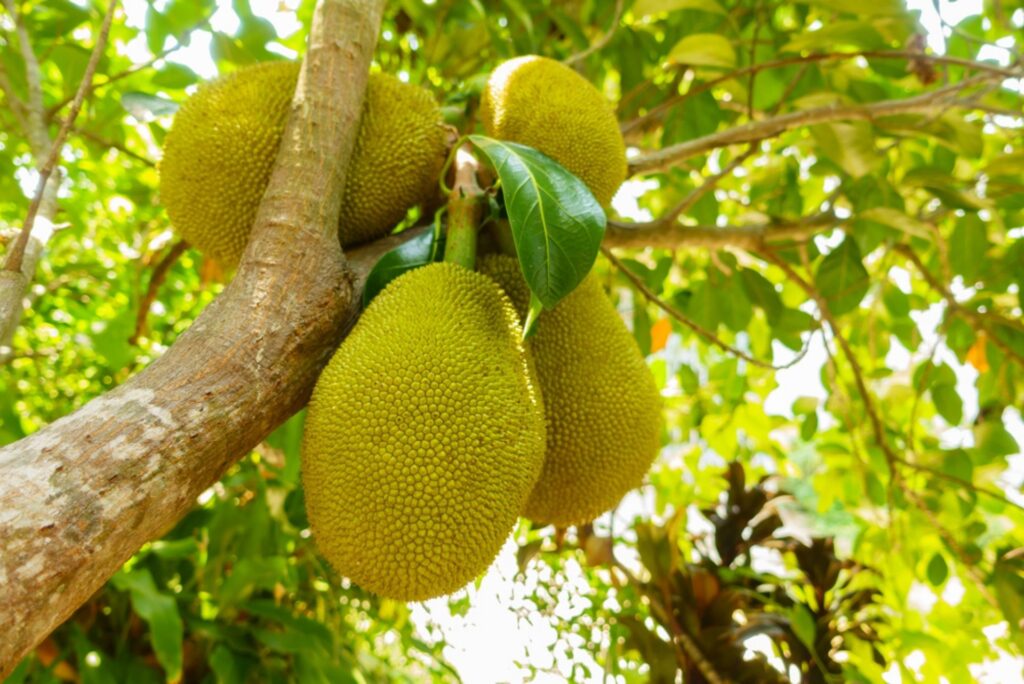 Revered as a radical vegan mock-meat in the West, jackfruits have always been a part of the Indian kitchen. Similar to bananas, the biggest advantage of jackfruit is its versatility. It is eaten as a vegetable when tender, raw, or semi-ripe, and as a fruit when ripe.

As a vegetable, it finds its way into curries, stews, dry stir-fries and biryanis. It is deep-fried into koftas and fritters, dried and fried as chips, and also pickled. The sundried seeds go into curries or are just roasted and eaten as snacks. The leaves can be used to steam food. The ripe fruit is used in sweets, syrups, jams, and chutneys. And jackfruits are nutritious: packed with protein, dietary fibres, vitamins A and C, and a fair amount of minerals. 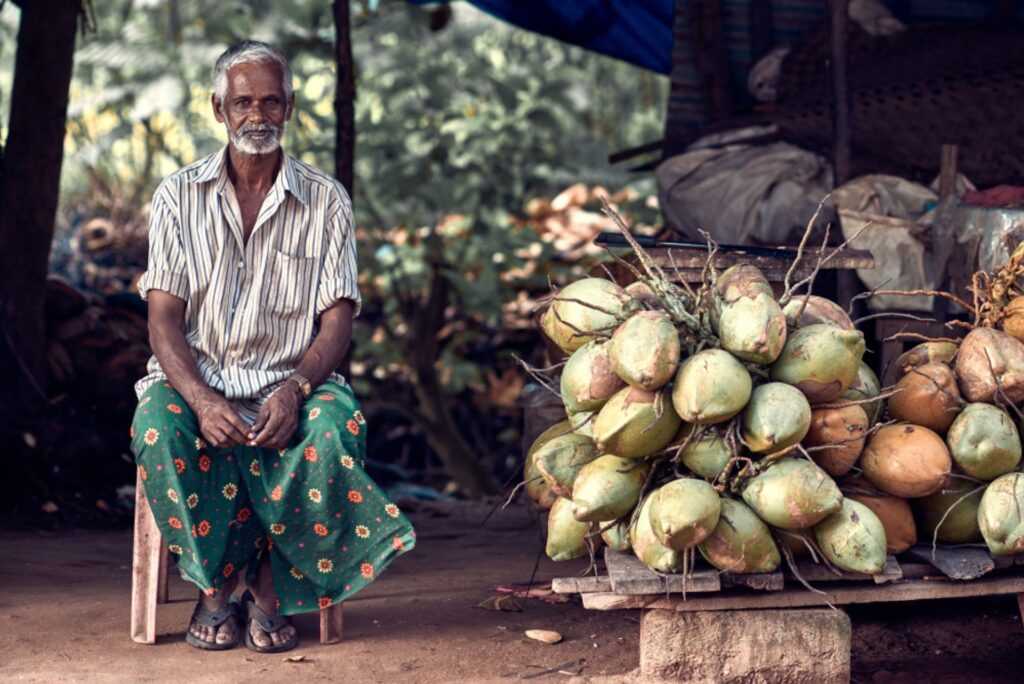 Used extensively in South Indian households, coconut products like coconut oil, water, flake and milk are added to pretty much anything sweet or savoury. Imagine a crisp dosa or fluffy idli without the side of coconut chutney — it just wouldn’t be right.

Also regarded as a miracle food in the vegan community, coconuts have come to replace many animal-based essentials like butter and cream in several recipes. Although controversial, they boast of numerous health benefits including their rich vitamin and mineral profile and high fibre content.

Coconut is also a highly sustainable and eco-friendly ingredient because all its parts get used. South Indians predominantly use coconut oil for cooking due to its nutty and rich flavour. If you don’t like the flavour or smell of coconut, refined coconut oil is neutral in taste and aroma.

Coconut milk and coconut cream are also added to traditional curries and desserts like payasam (kheer) to add that extra punch and creamy texture usually provided by their dairy counterparts in most North Indian cuisine. The coconut kernel can also be used to make a vegan coconut yoghurt using a probiotic powder or culture, and the shavings are generally used as garnish over dishes like poha (puffed rice flakes). The husk can be recycled as fibre for other raw materials.

Experiment with coconuts in a payasam, chutney or vegetable curry. 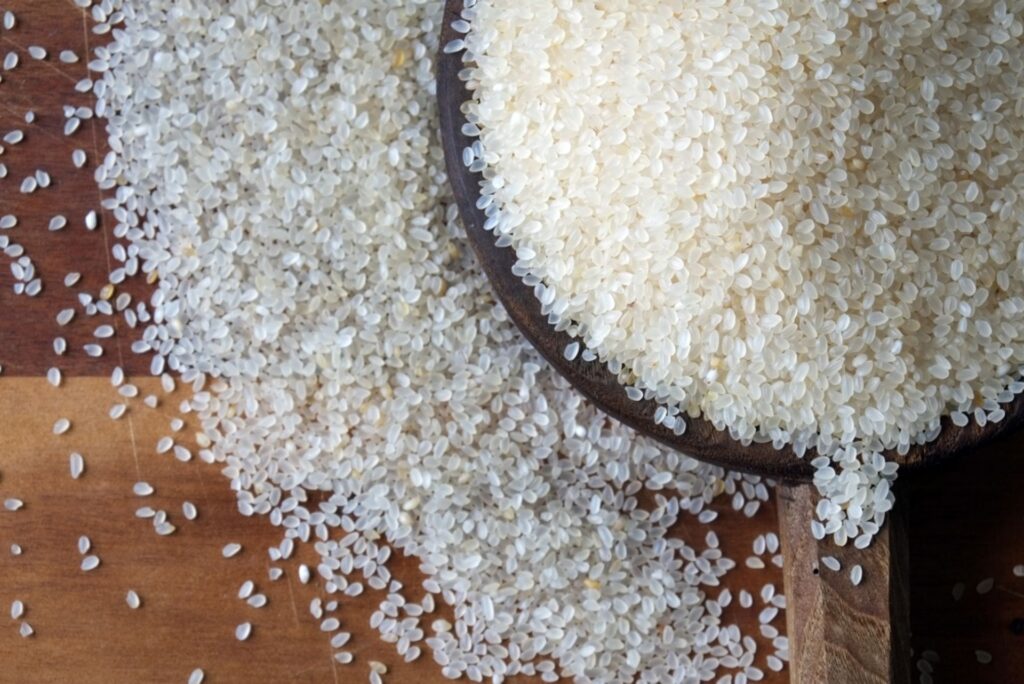 Rice is undoubtedly the hero of every quintessential South Indian meal. From the small grain Seeraga Samba, an essential ingredient in biryanis in Tamil Nadu, to the Kaima (or Jeerakasala rice) that is used for the Malabari biryani and the Kavuni Arisi (a unique black rice varietal) that’s almost unique to Chettinad cuisine, there are distinctive rice varieties across the region that differ in flavour, texture and even colour.

Apart from one-dish rice meals like puliyogare (tamarind rice) or poha, rice is also combined with lentils and then fermented to make the batters for dosas, appams, etc. Unfortunately, for much too long, rice has conveniently been tagged as the evil carbohydrate. But does rice deserve its bad reputation?

Dietitian Rujuta Diwekar says rice is an essential prebiotic, a type of fibre our bodies cannot digest but important for the probiotics in our body that helps us with a healthy gut. She adds that rice steadies the release of blood sugar especially when paired with some protein, and contrary to popular belief, there is no link between metabolic syndrome and rice.

However, if rice just isn’t your thing, South India also produces other nutritious millets that can be substituted for rice like oodhalu (barnyard millet), thinai (foxtail millet), ragi (finger millet) or samai (little millet), which are also low on the glycemic index.

Use rice in a traditional puliyogare, a Bisi bele bath, or idlis. 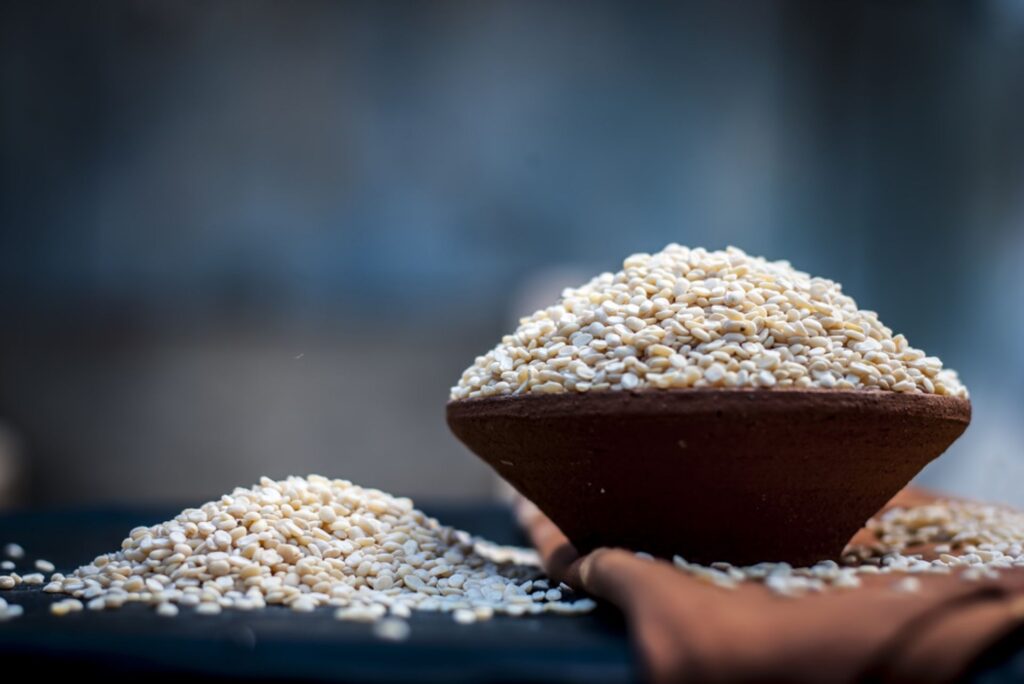 Lentils are a vegan’s best friend: rich in protein, complex carbohydrates, fibre, and minerals. These tiny legumes are the powerhouses of plant-based nutrition and India just so happens to be one of the world’s largest producers of lentils in the world.

While each region of India has its favourite selection of dal (lentils), in my completely biased opinion, South India simply nails it. Similar to the north, South Indians also use lentils to make soups and curries, they are also mixed with rice and fermented to make nutritionally dense and delicious food like idlis and uttapams. They also make for mouth-watering fried snacks.

A common variety of lentils used is urad dal, usually called black dal when whole, and white when it’s skinned and split. Urad is used to make bondas (potato fritters), papads (poppadoms), medu vadas (lentil fritters), payasam, and even dosas. It has a very earthy taste and is often slimy on the tongue. Urad dal helps improve digestion, is a good source of protein, and controls cholesterol.

Another common type of lentil is arhar or toor dal (pigeon peas). It is thick and gelatinous and has a meaty consistency. It is the most widely used lentil in India and works best in curries and stews. 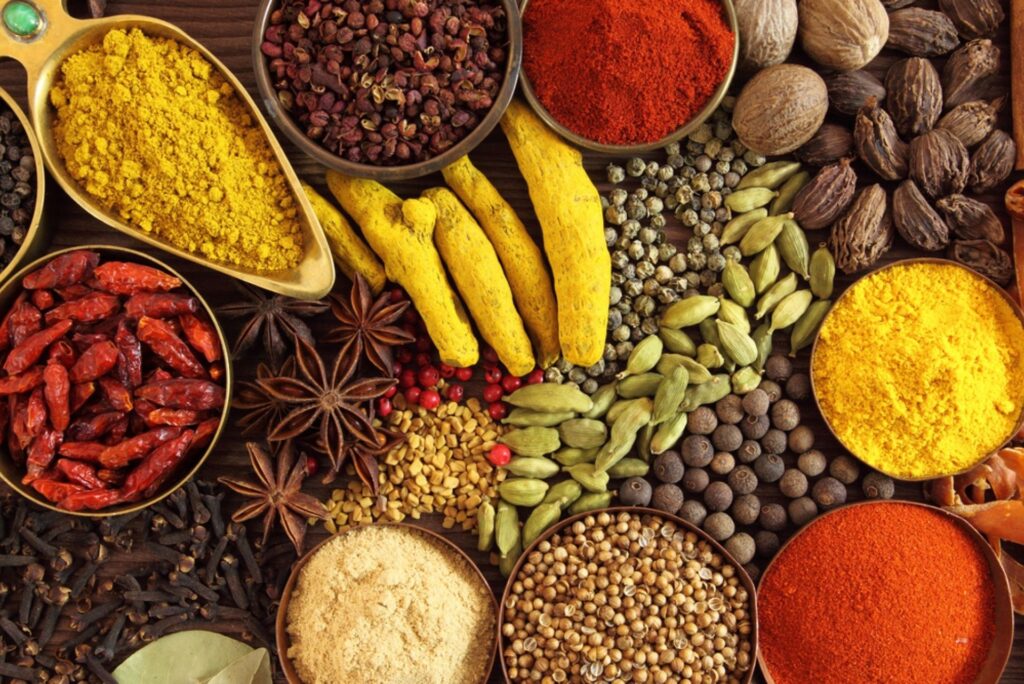 This wouldn’t be a piece on India if we didn’t talk about spices. South Indian food would be dull and lifeless if not for the nuance brought in by the array of spices. Cardamom seeds, both black and green, tamarind, red chilli and turmeric are some of the most popular and versatile spices found here.

Cardamom is used in pretty much everything, from spice mixes (like garam masala) to desserts. It is also known for its health benefits: it’s anti-carcinogenic, an anti-depressant, a detoxifier, and a cure for gum disease.

Tamarind is noted for its sweet and sour, tangy flavour. Often used as a paste, it’s an important feature of South Indian cuisine, particularly in Andhra Pradesh and Tamil Nadu.

One of the most essential ingredients in the South is the red chilli. Usually dried, they can be ground up into a powder or used whole. If you’re good with handling spice, eating red chillies is often regarded as good for your health.

The bright orange-yellow turmeric is often used to give curries an attractive golden colour. It can be used fresh, dried, or in a paste. Turmeric has recently been gaining a lot of traction globally due to its anti-oxidant and anti-inflammatory properties. Try experimenting with spices gradually, if you aren’t accustomed to the flavours yet.

Spice up your rasam with these South Indian staples.

Nadine Monteiro
Nadine is a Liberal Arts student at Leiden University at The Hague, with a passion for anthropology, sustainable development, and human rights. Dabbling in the fields of content creation and journalism led her to The Vegan Review where she explores her enthusiasm for health and nutrition. She is a strong advocate for body acceptance and Health and Every Size (HAES) and aims to bring more representation of body diversity into the mainstream. You're most likely to catch her either on a new travel adventure, knee-deep into an obscure podcast or attempting to make homemade nut butters - there is no in-between.
Previous articleInjustice is injustice: The intersectionality of LGBTQ+ and veganism in Taiwan
Next articleMaking vegan Indian musical instruments: Into the minds of creative geniuses