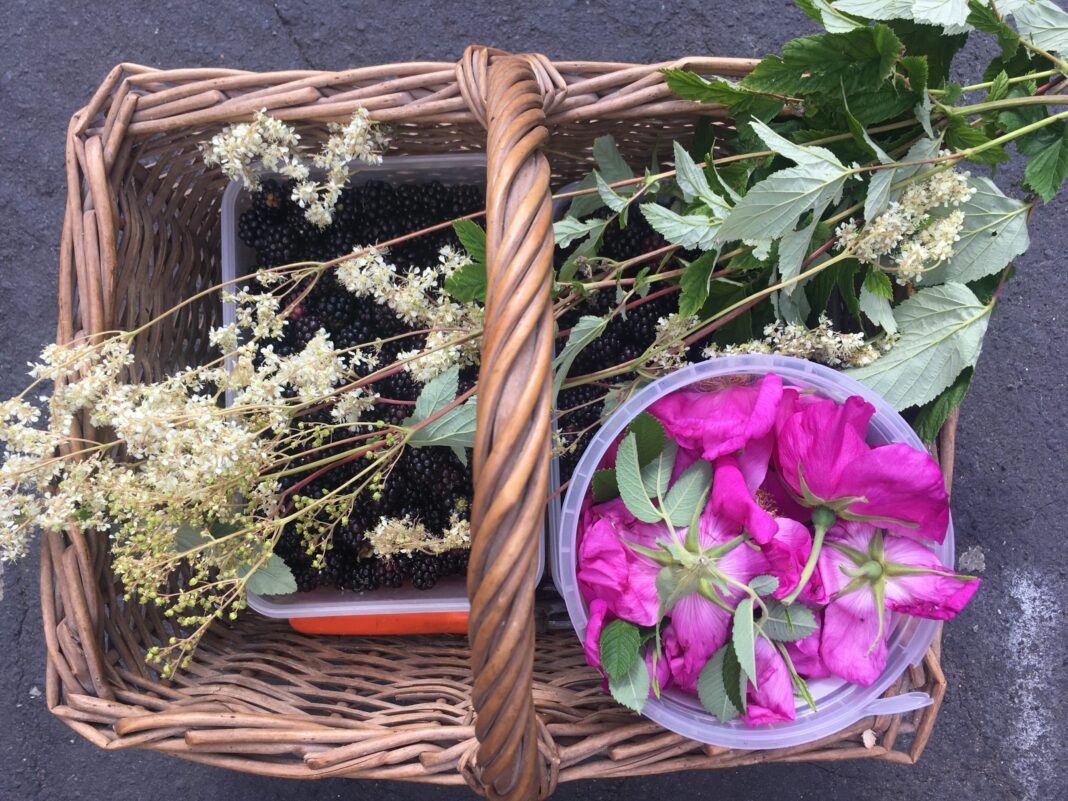 Lockdown saw many of us get creative in the kitchen. I spent my time perfecting crazy recipes I’d seen online for banana peel bacon, meatless banana peel meatballs, and banana peel pulled pork.

I know what you’re thinking, and you’re right: I ate a lot of bananas during lockdown.

But there were other things I tried and succeeded at. Not just new recipes, but things I’d never taken the time to do before. I grew and ate my own potatoes; cultivated herbs from seed; and also made a very impressive batch of limoncello, which gave me both toothache and a hangover.

Not only did lockdown unleash my kitchen creativity; it also gave me a sense of adventure. Inspired by my humble successes and what felt like food independence, I looked beyond my four walls and wondered if I might be able to make a meal without sourcing my ingredients from the supermarket. Using nothing but my wit, newly-found kitchen skills, and whatever foods I might find growing in the wild, could I put together a vegan meal just using food growing wild? In Manchester?

In truth, the answer was probably not. Not only do I lack experience in picking wild produce, I’m also colour-blind, so there is an inherent risk that I would be unaware of all those warning signs that nature sends out, and accidentally ingest some deadly species of berry or nut.

To cover this blind spot and satisfy the health and safety department here at The Vegan Review, I enlisted the help of a professional. Though she classes herself more as a hobbyist, when it comes to foraging, food writer Sarah Tarmaster knows more than her fair share about what you should, and more importantly, shouldn’t put in your mouth. I joined her on a walk through what she describes as her larder — the wild plants and trees that line the Fallowfield Loop and Highfield Country Park in South Manchester. 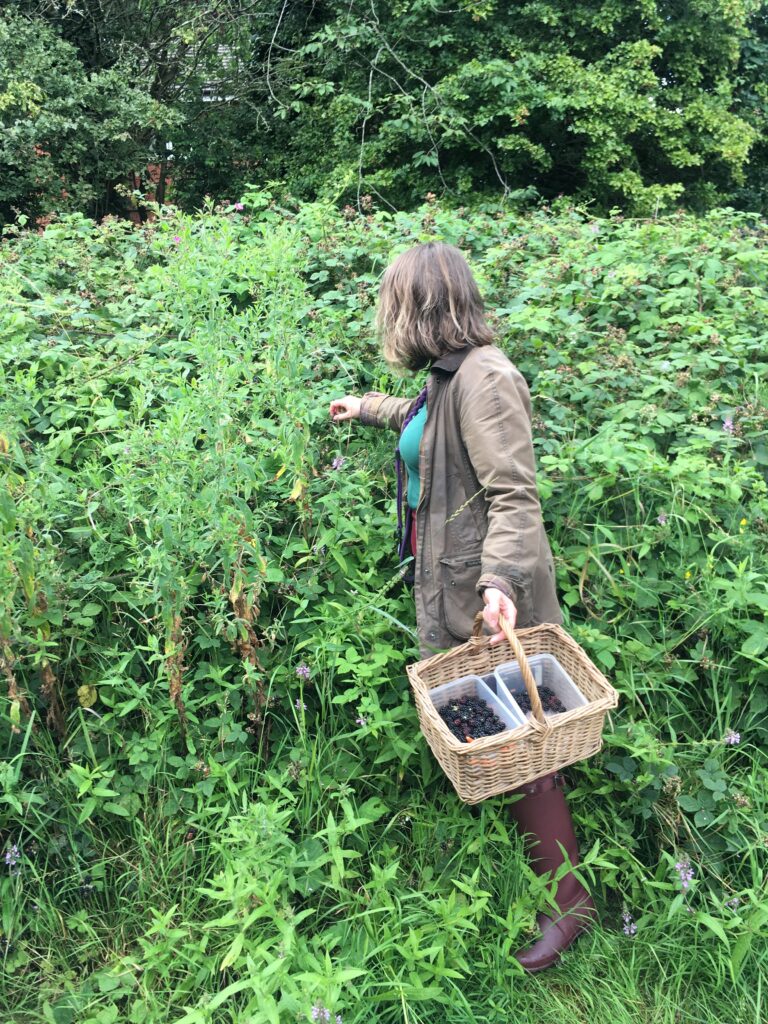 The first thing that strikes me upon meeting up is that I am in no way appropriately dressed or equipped for this. Where I opted for the perfect holiday-slash-barbecue wear combination of shorts and espadrilles, Tarmaster is clad in wellingtons, thick leggings and a wax jacket. One hand sports a pair of secateurs, in the other a wicker basket containing several containers, bottled water, a couple of plant ID books and washing up gloves. Later on, dehydration, and red scratches all over my legs and forearms would only confirm my foolishness.

Highfield is a country park located on the Levenshulme/Reddish border. An easy and safe way to get there is by following the tracks of an old railway-cum-walking/cycling path, the Fallowfield Loop (known locally as the Floop).

As we walk, Tarmaster the basics of foraging: 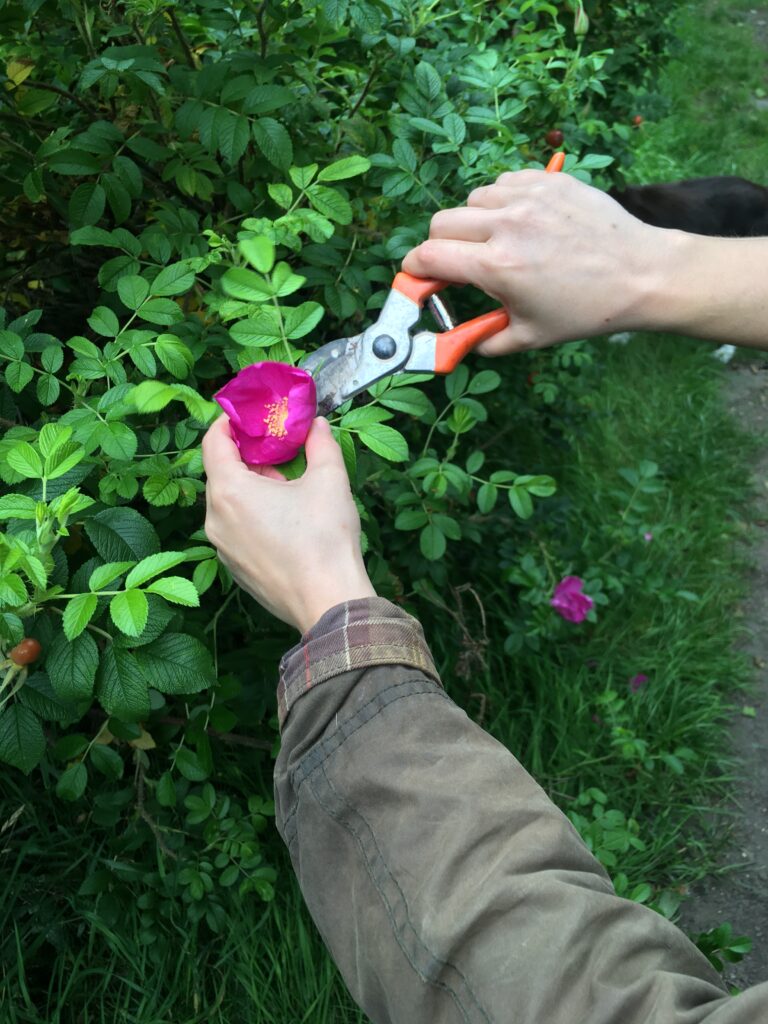 The first crop catches our eye as soon as we enter the park: its bright pink petals popping out against an otherwise nondescript bush. This is the Japanese rose, and it’s perfume is exquisitely striking, evoking memories of holiday cocktails and warmer climes.

The Japanese rose is an invader to our shores – a garden species that’s escaped. It has large, bright pink flowers and a sublime scent, which smells exactly like Turkish delight (to which Tarmaster is extremely partial). The secateurs come out and we take some heads, gently placing them in one of the old takeaway tubs in the wicker basket.

When we get back, we would infuse the petals with vodka for 36 hours, and once that’s ready, we would strain and add a simple sugar syrup to make a banging rose liqueur. 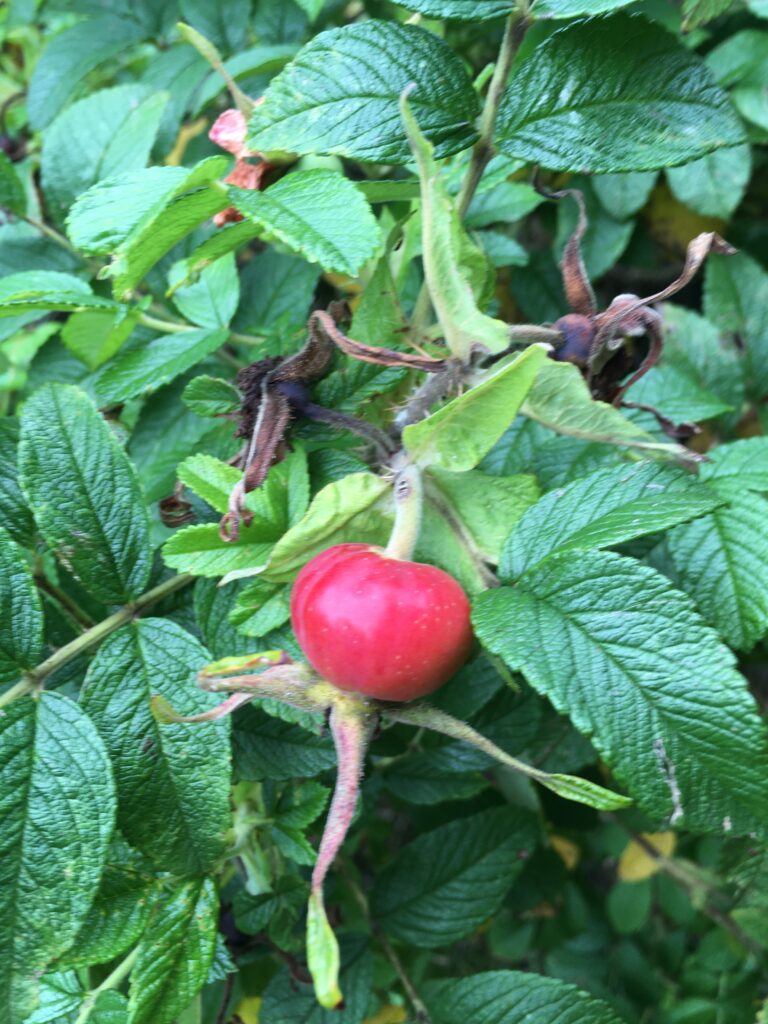 But the real magic of these plants comes with the help of the bees. When pollinated the flowers turn into rosehips which contain more vitamin C than oranges. During World War II, they were picked en masse and preserved with sugar and water as a drink for children. They can also be added to gin, but there is more to foraging than flavouring alcohol.

Even though Japanese rose flowers pack much more of a punch than our native dog and field roses, the hips on our true natives make for a better-flavoured syrup. 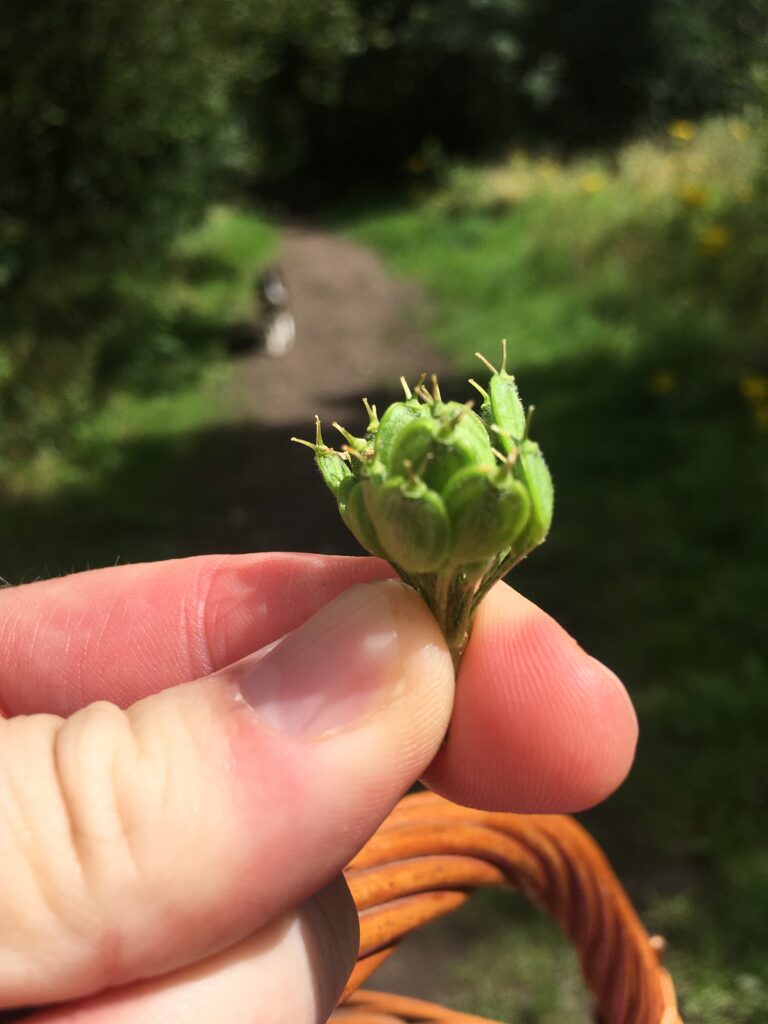 Over the next two hours, we travel only a few hundred metres yet found a plethora of edible treats: Hogweed seed which has an orangey coriander flavour good for cookies and breads, or, while still green, is a great addition to a stir fry.

The ubiquitous dandelion, the scourge of many a gardener, but actually a great salad leaf, especially when they’re young. They’re a little bitter, like radicchio, and paired with a hairy bittercress and fat hen, you can make a wild salad from the ‘weeds’ growing in your local park.

We also found the crazy ‘pineapple weed’, so called because it’s a weed and it tastes like pineapples. You’ll recognise its yellow pincushion heads as something you see along most paths growing up through cracks in pavements. 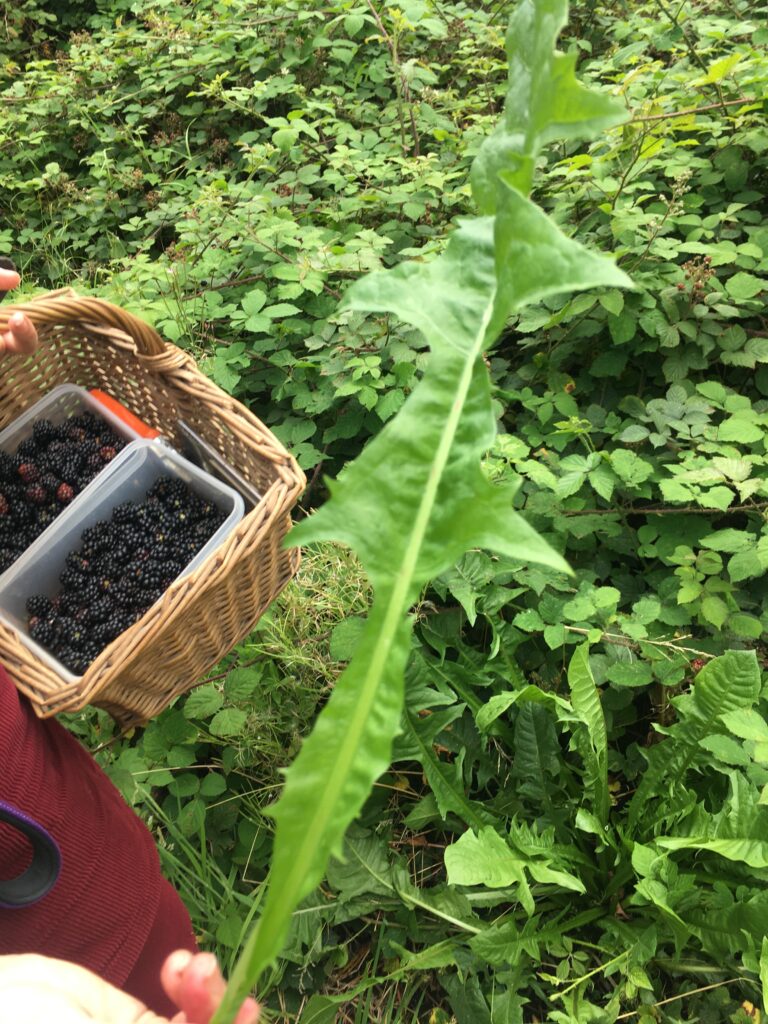 What do you think about nettles? Large stingy annoyances, the bane of childhood walks, a pernicious weed you’re battling to get out of your garden? Nettles are actually a very tasty wild green, but need to be cooked (unless you’re into those matcho nettle eating contests). At this time of year they’re getting a little stingy, so you just take the softer tops — but in spring, you can harvest the whole plant.

Once cooked above 70 degrees, nettle stingers pop, rendering them safe to eat, a healthy green very much like spinach. Great stirred through a dal, added to casserole or stir-fried with garlic and chilli.

This is where you need the washing up gloves, as nettle stings will get through all but the heaviest duty gardening variety. 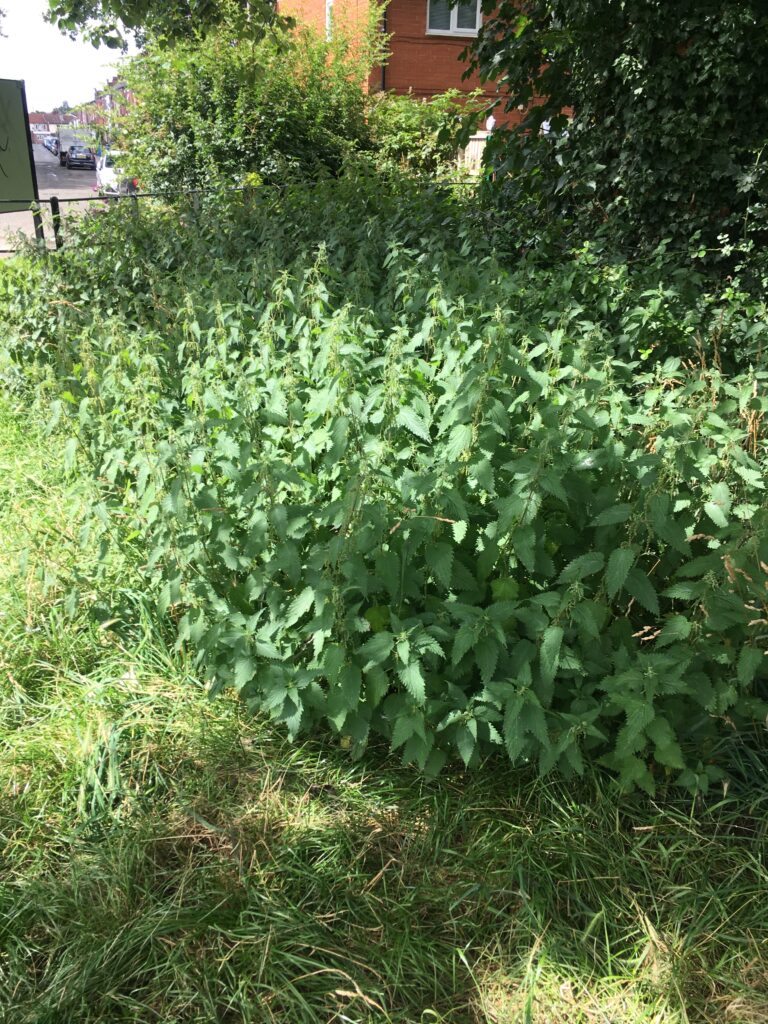 We even spot Japanese knotweed, which can also be eaten. It’s a little late now, but when the shoots first start to appear, you can harvest them; they taste like a lemony rhubarb.

One thing to note: if you take Japanese knotweed, you cannot put any of it in the bin, as it can propagate from tiny bits and is a very invasive species. So you either have to eat everything you pick, or burn any trimmings.

There’s also lots of fruit. Blackberries don’t usually ripen till mid-August, but there’s an early bumper crop this year and we come away with almost a kilo each. Most of what we pick would be used to make jam in the evening, but some frozen to make crumble later in the year.

I get a lesson in picking blackberries: don’t take the squidgy ones, and mind the prickles. I ask Tarmaster why she’s picking some that seem a little underripe for me. Apparently, these are great for jam. Blackberries don’t have much pectin, so she’ll use lemon juice to help set the jam later, but underripe fruits have more pectin. Obviously, the frozen ones will be the riper ones.

As we nibble on freshly picked berries, I ask if she saw the recent video on social media of larvae emerging from a strawberry, and if there were a risk of us finding a similar surprise in our blackberries.

“Sure. That’s nature. If I left these for a few hours in my warm kitchen, the place would be buzzing with fruit flies.”

I started to have second thoughts about what I was eating. Laughing at the look of disgust on my face, she adds: “This food is not just food for humans. You might find a worm in your apple, but that’s because worms like apples, and here there are no pesticides. If I see a worm, I pick them out before they go in the jam pan, but I’m not too fussy, to be honest. Jam is cooked at 104.5°C; they’re not going to survive that!”

Foraging was part of Tarmaster’s childhood in rural Wales. It was a pastime, an education and also a welcome supplement to a family on a tight food budget. Spending a few hours in her time I start to see more than just trees and bushes, and begin to understand what she means when she says this is her larder.

It’s almost like she is tuned into the ebb and flow of this area in particular, knowing where to look and, just as importantly, when, and always excited by what she finds. Though not vegan herself, this connection to nature resonates with me.

“We have to understand that many of the crops we eat come to us as a result of fertilisers and pesticides… and are bred to have a longer shelf life. It means they are more viable and cost less, but so many animals and insects are killed in that process. It’s not good for the environment. There has to be a balance,” explains Tarmaster.

“I come from the countryside, I see the struggle farmers have and I know there’s the whole argument that pesticides mean we can produce more from less, feed more people at a lower cost, and I’m fully there for that, where it’s needed. We also need to look at how much we’re producing, and how much we’re wasting. It’s a very complex argument and means looking at food security, buying chains, supermarkets and just about everything that grows, moves, stores, sells and serves us food.

“But, personally, I think we need to look at other interventions where we can — crop rotation, encouraging wildlife back on to farms to restore some of the balance, using animal rotation to fertilise fields for crops. So, finding pesticide-free crops on my doorstep helps with that.”

And out here in Highfield there seems to be some of that balance. The hedgerow is teeming with insects, birds and signs of other, much larger animals. And that balance is also reflected in that most of the things we pick will not survive even a few days, so there is no point in taking more than you need. Indeed, Tarmaster has all her ingredients for jam-making ready, so we can cook the blackberries as soon as we get home. Blackberries don’t last, unless you preserve them by cooking, pickling or freezing. 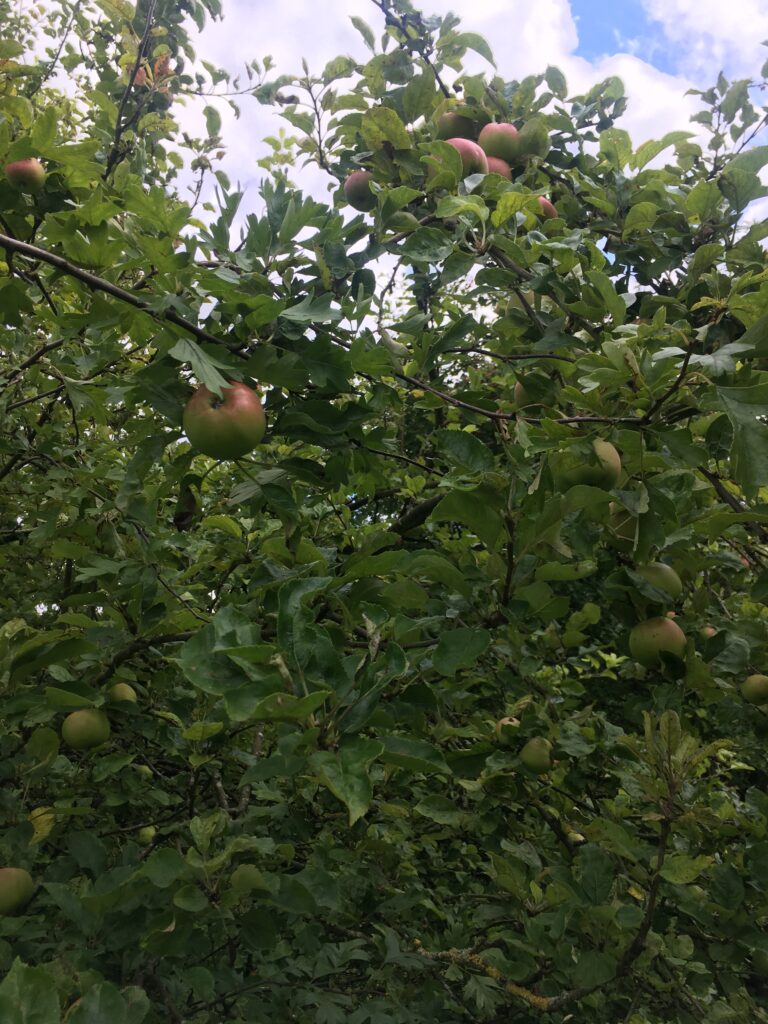 On the way back, we stumble across several apple trees, though it will be October before these are ripe for picking. We’re also a little early for sloes and hawes, we’ve missed the season for elderflower (though it won’t be long until the elderberries are ready), and the time for cherries has passed too, highlighted by those we see shrivelled and unpicked on the branches. 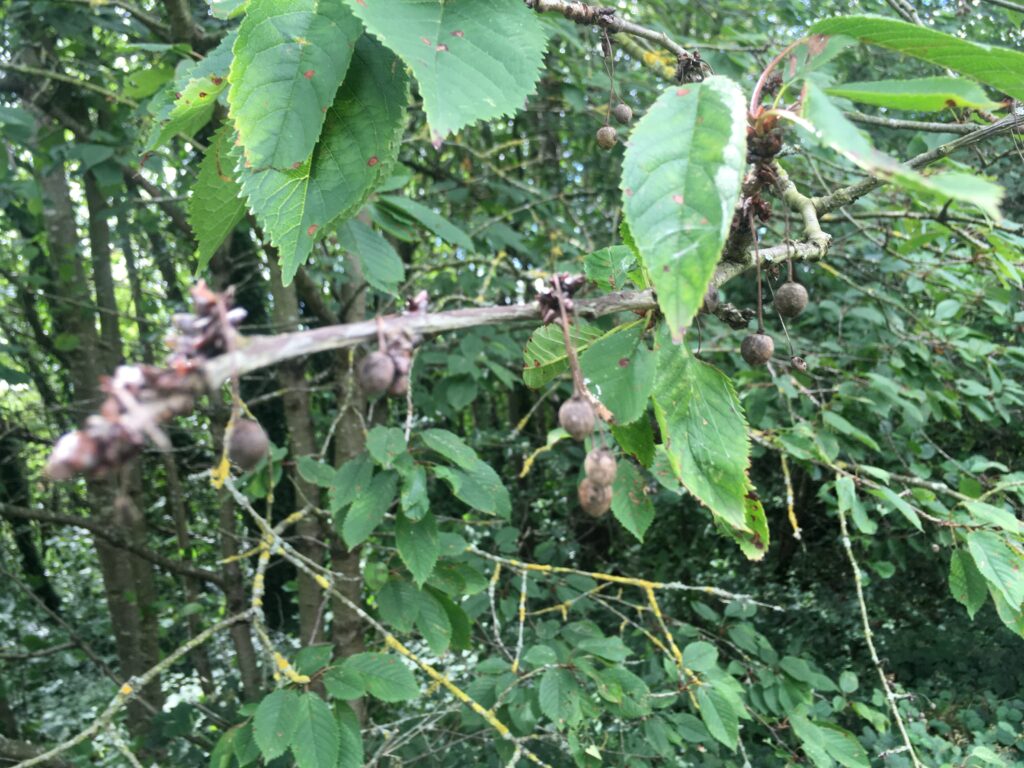 We haven’t even looked for mushrooms today, but Tarmaster points out where I might find some next time and how best to serve them (jelly ear: great for adding texture to soups and stews). As I arrive back home, my head is almost as full as my basket. It feels like I’ve absorbed terabytes of information today. Maybe I have too, as I’m embarrassed by my ignorance up till this point. 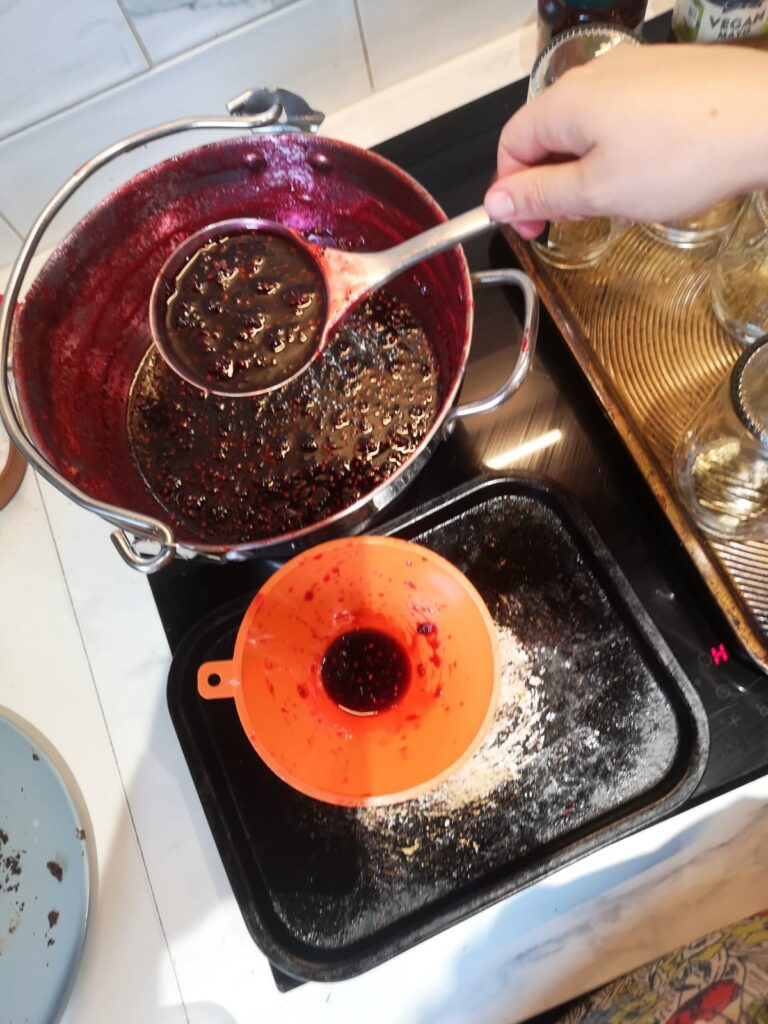 On reflection, I may not have gathered enough to put together a meal, or learned enough to live off the land, but I’ve got enough food to make a surprisingly tasty side salad, and enough knowhow on how to pick and cook nettles, even if I’m not yet brave enough to try that particular recipe.

Should reading this inspire you to try it for yourself, let me suggest you wear better clothing, and also do some research before you start munching on every plant you see. There’s some stuff out there that really doesn’t like your insides.

Anthony McGinley
Ant is a podcaster, voice-over artist and character actor. His proudest possession is his beard, which he's had almost as long as he's been vegan. He's a fan of dad jokes, travel, and Manchester City
Previous articlePlant-based wrestlers: a vegan diet for peak performance
Next articleThe UK Vegan Family’s livestream with Sinclairs A Family of the Earth, as it happened