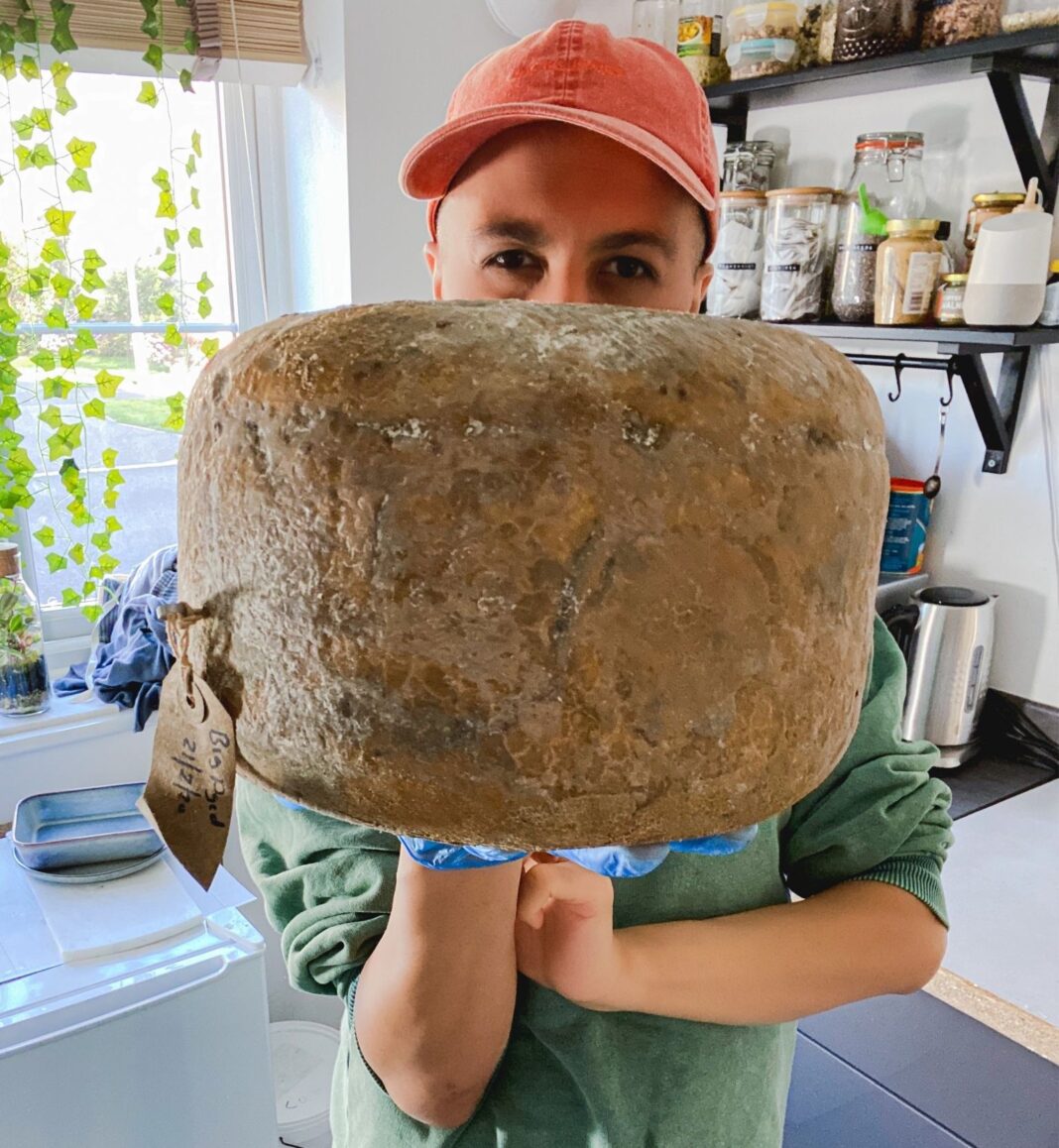 How do you get your cheese fix if you’re vegan? Sumear Safdar-Robins has the answer. Using traditional methods, Food by Sumear is making authentic aged vegan cheese.

The cheesemaking industry dates back more than 4,000 years, and still thrives today. A newer development within this ancient industry, however, is vegan cheese.

As a dairy product, cheese is a major food vegans cannot consume. However, the vegan cheese market is becoming increasingly popular. A report by Variant Market Research estimated that the global plant-based cheese market is expected to reach $3.9 billion (£3 billion) by 2024. So don’t despair if you’re vegan and love cheese — you can still get your fix.

While there are a host of plant-based cheeses available, one stands out. A vegan cheesemaker from Bristol is approaching this modern industry in a traditional way. Sumear Safdar-Robins was making dairy cheese for around a year-and-a-half, before switching to plant-based cheesemaking.

Despite the differing ingredients, he uses conventional methods from the dairy industry: “The art and science are more or less the same. There are a few differences in method, and there are certain aspects of dairy you can’t yet recreate, but the ethos of cheesemaking remains the same.”

Safdar-Robins describes himself as a “pretty big snob and purist” when it comes to cheese. He felt the vegan cheese options available in supermarkets were the “furthest things from cheese” and wanted to create authentic, truly aged and vintage hard cheeses. Food by Sumear’s cheeses are currently the only in the UK that are long-aged and have a natural rind.

He describes his transition to veganism and cheesemaking as a personal journey: “I started making cheese originally for my own self-journey and correcting a path I took with an eating disorder. It eventually led me to become vegan and changing the business to be 100% vegan itself.”

The process of making the cheeses is long, technical, and, most importantly, secret. Cheesemakers traditionally have a lot of well-kept secrets about their processes, and vegan cheese is no different. But Safdar-Robins told The Vegan Review as much about the process as he could.

He begins by developing his own set of cultures to cultivate the base of the cheese, which he says is similar to what was done in the past with dairy. To culture something is to maintain bacteria in conditions suitable for growth. Cheese cultures are essentially a group of specific bacteria strains put together for making cheese, which are classified based on the temperature they work in, or the strains of bacteria they contain. Cheese cultures raise the acidity of milk by consuming the lactose and converting it into lactic acid.

Safdar-Robins’s cultures are currently solely nut-based, and his website states that they contain no artificial flavours or preservatives, and everything is free from soy, miso and nutritional yeast. So how does he make his own cultures without milk?

The cultures made are “unique sets”, which are created and maintained unique to each producer. The cultures at Food by Sumear are now a year-and-a-half old. You can see why cheesemakers tend to be quite secretive.

Then, depending on the type of cheese he’s making, Safdar-Robins adds other ingredients and processes it further to assist with texture. He explains that this is “similar to dairy-cheesemaking, like the cooking of curds, pressing, etc.”. The important step of ageing and maturing wheels of cheese is done by hand. His most popular product, a maple wood-smoked cheese, is smoked outdoors using real wood. He has also created a vegan clotted cream, which is developed in a 12-hour process.

Safdar-Robins is passionate and loves the cheese he makes, but wants Food by Sumear’s products to be recognised on its own standing, rather than as alternatives to dairy. “Creating an imitation of an exact dairy-cheese is quite impossible, so everything I have developed is to serve as its own type of cheese.”

By blending traditionalism with the evolving market of vegan cheese, Safdar-Robins has created a unique product that vegans can enjoy and indulge in guilt-free.

Cheese and crackers anyone?

Yasmin Jafar
Yasmin is a journalism undergraduate at City, University of London who is a massive foodie — especially for anything dessert- or coffee-based! She’s passionate about food, its history, and researching and reviewing different diets around the world.
Previous articleThree vegans talk about the positive impact veganism has on their mental health
Next articleAuthentic Chinese dishes that happen to be vegan