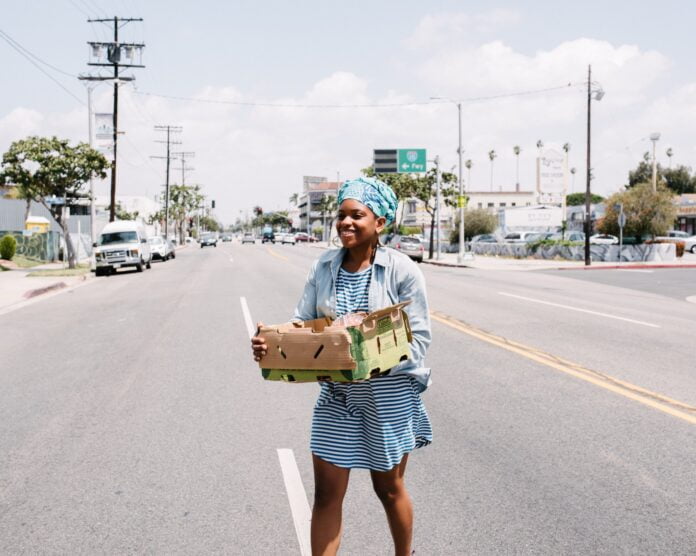 Vegan or not, having regular access to fresh, nourishing, and healthy foods makes for a better life. Sometimes, it’s tempting to reach for vegan junk food or unhealthy processed foods, but what if that’s the only thing you had immediate access to?

What if, instead of whole, plant-based foods, processed foods were the only readily accessible options in your neighbourhood? What if, to be able to get healthy foods, you had to take a bus for more than an hour each way? Would it be worth the journey? Especially if you work full time, have familial responsibilities, or limited funds to spend?

Where you live shouldn’t determine how healthily you get to eat, nor how often. Everyone, regardless of income, should be able to eat high-quality foods without breaking the bank or travelling miles outside their neighbourhoods. SÜPRMARKT, a low-cost organic grocery pop up created to serve low-income communities in Los Angeles, is taking the food apartheid issue head-on.

Community, understandably, is at the very heart of SÜPRMARKT. From its start in 2016, the weekly organic grocery pop up and subscription service has centred on making high-quality food accessible to those who need it most. With its founder being an LA native, SÜPRMARKT is truly a homegrown effort. Auset grew up in South Central LA, where, to get organic produce, you’d have to take a two-hour bus ride. The inability to get fresh, organic groceries was a problem Auset felt called to solve, no matter what — even if it meant starting with only $100 and no table.

SÜPRMARKT tackles the obvious barrier to healthy eating with its offerings, while doing so at an affordable price. In addition to keeping produce prices low, the pop-up accepts EBT to allow income-restricted families even more ease of access. With the SÜPRSEED, the non-profit arm of her venture, Auset also provides a support system and educational resources, including events, workshops, and healthy giveaways to make healthy lifestyle changes sustainable and attainable for all.

These efforts beautifully fuel SÜPRMARKT’s mission of “ending America’s food apartheid, one bite at a time”.

What is food apartheid?

You’ve probably heard the term ‘food desert’ used liberally to describe communities that lack fresh, high-quality foods, but it misses the mark by making it seem like a naturally occurring state that “just is how it is” rather than a man-made, solvable issue. That simply isn’t the case.

The term ‘food apartheid’ more aptly gets at the heart of why these communities lack fresh foods by centring on how systemic racism and economic inequality keep the food system unjust.

In a 2018 interview, longtime food justice leader Karen Washington of Rise & Root Farm describes the importance of reframing conversations around food access by using the term:

“You say ‘food apartheid” and you get to the root cause of some of the problems around the food system. It brings in hunger and poverty. It brings us to the more important question: What are some of the social inequalities that you see, and what are you doing to erase some of the injustices?’”

South Los Angeles is a place where food apartheid is alarmingly clear. The area has only 60 grocery stores to serve over one million residents, and it has the highest rates of disease and early deaths in the region from preventable causes, including heart disease and diabetes.

Notably, BIPOC (Black, Indigenous, People of Color) predominantly feel food apartheid’s effects: one in six Latinx households in the United States struggle with lack of food, and African Americans are significantly more likely to experience food insecurity than any other demographic.

Far more than pop-ups and educational resources, SÜPRMARKT is part of a holistic effort to permanently better the health of South LA and beyond. Upon learning that Mr. Wisdom—one of the area’s oldest health food stores—closed, Auset launched the campaign Keep Slauson Fresh to purchase the space to be able to keep healthy, affordable foods in the neighbourhood.

The news of Mr. Wisdom’s closing reached Auset on the day of LA rapper, entrepreneur, and activist Nipsey Hussle’s passing and inspired Auset to immediate action, as she saw a critical need to address in the community. A lesson Auset says she took away from the late rapper’s life is “actually doing what you know is needed instead of wasting time thinking about it.” The campaign has since exceeded its $75k goal in donations, showing the far-reaching support for the mission.

SÜPRMARKT also partners with local businesses to provide free vegan meals through its #FeedTheHood initiative, and through SÜPRSEED, Auset was able to bring the first-ever vegan festival experience to South LA in October 2019.

SÜPRMARKT now and into the future

On operating during the time of COVID-19, Auset describes needing to shift many parts of SÜPRMARKT’s operations rapidly to be able to serve more people than usual, given that the lockdown has even more heavily impacted folks’ ability to access food.

The ill-effects of food insecurity are real and widespread, but efforts like Auset’s prove that real change can be made when backed by passion, dedicated hard work, and community support.

Speaking about SÜPRMARKT in a 2019 Broken Bread Clip with Chef Roy Choi, Auset said she “wants to be able to expand to all the hoods across America”. She also wants to be serving 1,000 people a week by 2021. Navigating the current pandemic and protest climate, SÜPRMARKT continues to adapt to serve the community with no plans of slowing down.

The best vegan cereal brands in 2022