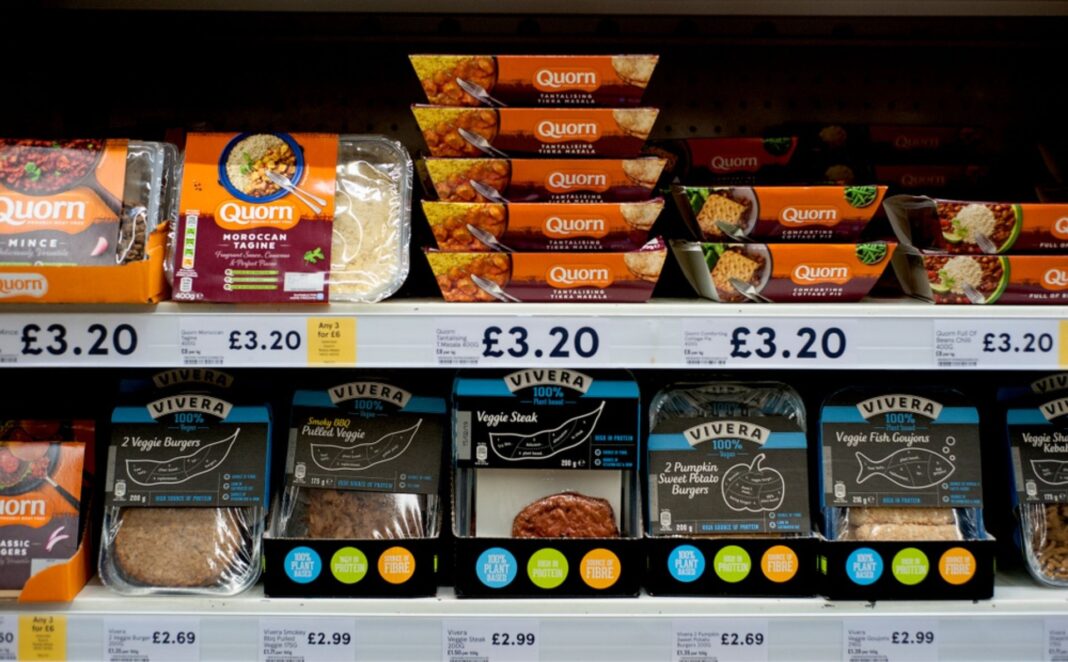 Tesco is the UK’s first supermarket to commit to a sales target for plant-based meat products, setting a 300% growth goal in the next five years.

Tesco is the UK’s first retailer to set a sales target for plant-based meat alternatives, aiming to boost sales by 300% by 2025.

As part of its sustainability commitments with the World Wide Fund for Nature (WWF) to halve the environmental impact of food production, Tesco, the UK’s largest supermarket, has laid out a range of measures to achieve its sales target.

The partnership between Tesco and the WWF includes the Sustainable Basket Metric, which, alongside the rest of the measures, aims to halve the climate impact of the average UK shopping basket.

Among its measures are availability. In the last year, demand for chilled meat-free lines — the most popular area of plant-based foods, which includes burger, sausage and mince substitutes — has grown by nearly 50% at Tesco. Now, the retailer wants to introduce and grow plant-based meat across all its stores, with products spanning 20 categories, including branded plant-based meat alternatives, burgers, quiches, party food, pies and ready meals.

A recent survey by Eating Better revealed that vegan options account for 16% of the ready meals in major UK supermarkets. While Tesco was second amongst the retailers in terms of the proportion of meat-free meals — with a third of its ready meals being vegan or vegetarian — it was also the supermarket where plant-based varieties were the most expensive ready meals.

To that end, Tesco has outlined its goals for affordability, saying it continues to invest in value so that cost isn’t a barrier when it comes to buying alt-meat products.

Innovation and visibility round up its measures, as it seeks to work with suppliers to bring more options to consumers, and provide the option of a meat alternative where a meat version is featured. For example, Richmond sausages and plant-based sausages will feature together. A study in July showed that plant-based meat sells more when placed in the regular meat aisle.

The supermarket is launching 11 new vegan products this week, with some centrepiece dishes part of both its Wicked Kitchen (launched in January 2018) and Plant Chef (launched in September 2019) ranges. These include No Duck Spring Rolls, Ginger Chai Cake, BBQ Bon Bons and plant-based Beef Joint and Chicken Crown.

Tesco is also the first supermarket to commit to publishing the sales of plant-based proteins as a percentage of annual overall protein sales to track progress. The retailer hopes that this level of transparency would encourage the food industry to make follow suit and make similar commitments. Teso and WWF are calling on other food businesses to increase transparency around sustainability and consider the Sustainable Basket Metric as a framework for monitoring progress.

The metric, which was released last year, has achieved 11% of its target to halve the average shopping basket’s environmental impact, which is measured in seven categories: climate change, deforestation, sustainable diets, sustainable agriculture, marine sustainability, food waste, and packaging waste.

“We can’t accomplish the transformational change needed for a truly sustainable food system on our own, so we’re calling on the whole industry to play its role, starting with increased transparency on its sustainability impacts,” said Tesco CEO Dave Lewis, who is stepping down from the role tomorrow. “We also call on the government to do more by helping to scale up innovations and create a level playing field to ensure companies drive sustainability in their supply chains.”

WWF CEO Tanya Steele said: “It’s great to see this sector-leading step from Tesco. Tackling the environmental impact of what we eat and how we produce it has never been so urgent. WWF’s Living Planet Report 2020 has just revealed that, in the last 50 years, wildlife populations have declined on average by 68%. The food system has been identified as the biggest culprit, but also presents one of the greatest opportunities to reverse this trend; rebalancing our diets is a critical part of that.”

Anay Mridul
Anay is journalism graduate from City, University of London, he was a barista for three years, and never shuts up about coffee. He's passionate about coffee, plant-based milk, cooking, eating, veganism, writing about all that, profiling people, and the Oxford Comma. Originally from India, he went vegan in 2020, after attempting (and failing) Veganuary. He believes being environmentally conscious is a basic responsibility, and veganism is the best thing you can do to battle climate change. He gets lost at Whole Foods sometimes.
Previous articlePackaging with rice paper: Israel’s future of makeup is green
Next articleFrom Lisburn to London: My struggles with going vegan