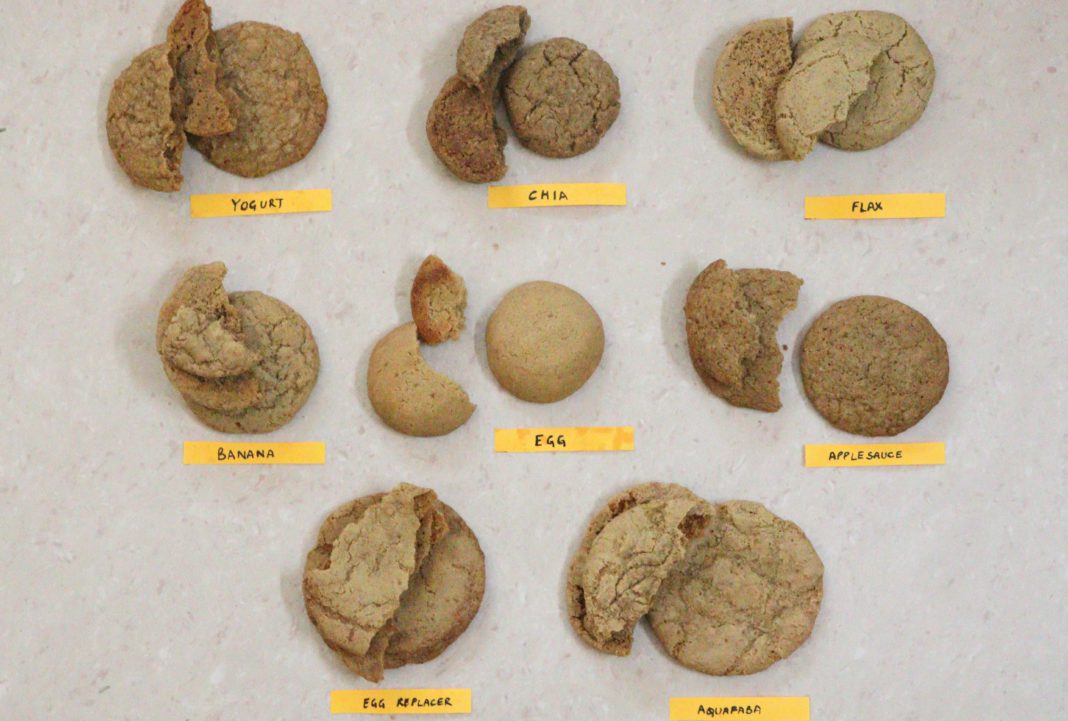 Two questions were put to test — which egg substitute mimics an egg closely for the perfect vegan cookie, and can you veganise all cookie recipes?

When ancient Romans plopped an egg into some cake batter, baking reached greater heights. But for plant-based eaters, this crucial event in the dessert world felt nothing more than a nightmare.

On days when we are not spoon-fed by the internet, egg substitution guides come in handy. But here’s the thing — substituting eggs in cakes is easy, cheesecakes are doable, crinkle brownies are hard to master, but egg alternatives in vegan cookies is an absolute pain.

The choice between butter and oil can make or break your cookies, brown to white sugar ratio determines the texture, bad chocolate can add extra fat and melt your cookies and a little extra baking powder can turn them into craters. Baking cookies teaches you a lot about ballparking measurements — that is, to never do it.

When it comes to cookies, eggs truly are a saving grace. They bind, add moisture, absorb excess sugars, add flavour, and help with the texture and rise. In eggless recipes, substitution can be tricky, especially when cookie recipes are already so fragile. Which is why I embarked on this monthlong magical, sugar-filled and mind-churning experiment to find the best egg substitute for cookies when you absolutely need a replacer.

This was the recipe I used:

Here were the results of my experiment: 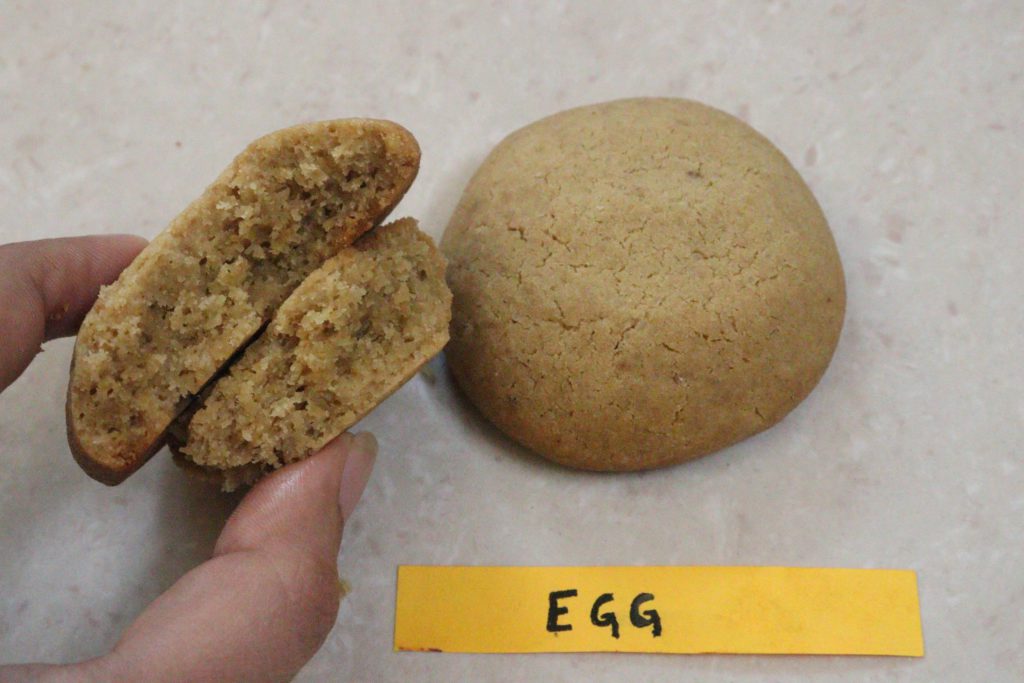 For an objective comparison, I baked a regular batch substituting coconut oil for 85g of butter. The dough was easy to work with, it was smooth and the cookies baked in under 15 minutes.

These were thick cookies, soft and cakey insides with crunchy crusts. Although this recipe calls for a lot of sugar, the egg absorbs the sweetness. And I could’ve patted them down before popping them in the oven as they didn’t spread much. Being the first batch, I creamed granulated sugar with coconut oil on an ice bath to bring it to a softened butter consistency. It is worth noting that softened oil requires eggs to provide moisture to the mix. Chia seeds soak up a lot of water yet don’t match that eggy consistency. I had to add almost double the required amount of chia eggs to bind the dry mix.

The brittle dough made rock-hard cookies that didn’t spread much. The chia egg lent a slightly earthy taste, though the thickness and toughness of the cookie were where my mind and teeth lay. 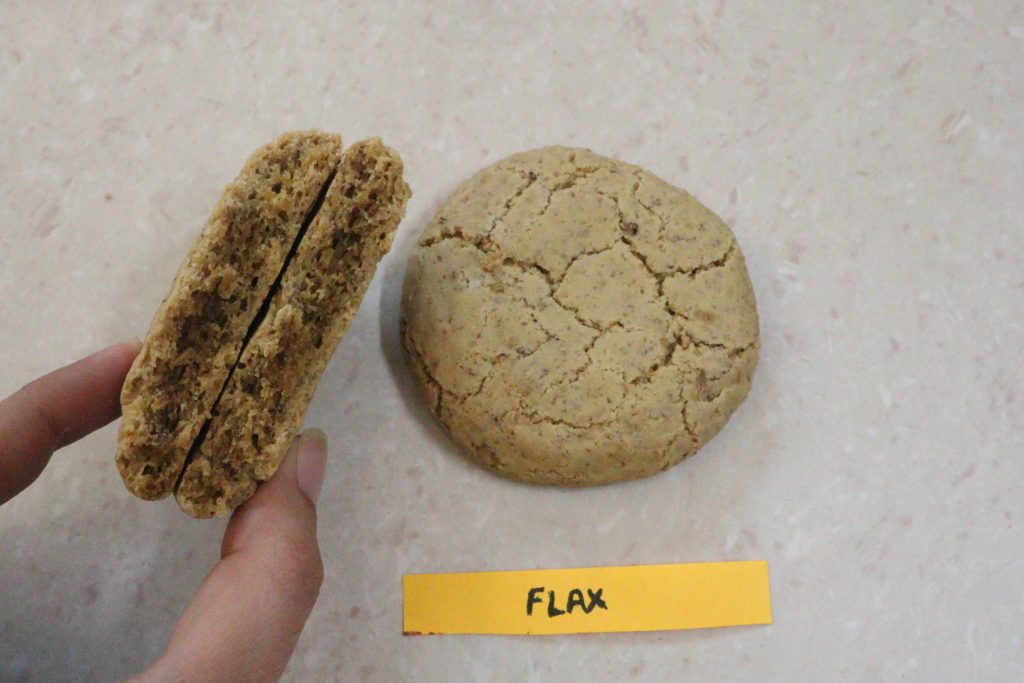 This was a rollercoaster. I did not expect much from flax eggs after the chia disaster. However, unlike chia, which gels very quickly, flax eggs have a runny consistency. Here, too, I had to use double the flax egg quantity to bind the dough.

These cookies performed very well in the oven. They spread evenly with beautiful cracks, but stuck to the parchment later. (My flax egg was a little watery; if that consistency was fixed, I doubt I would’ve run into this issue.)

Upon tasting, the flax egg balances the excess sugar to some degree by adding a slightly gritty texture to the cookies. These have a great bite — a soft cakey centre and crunchy crust. However, they were a little dry. Then again, that made them great to dunk in milk.

3 to 4 tbsp mashed banana per egg 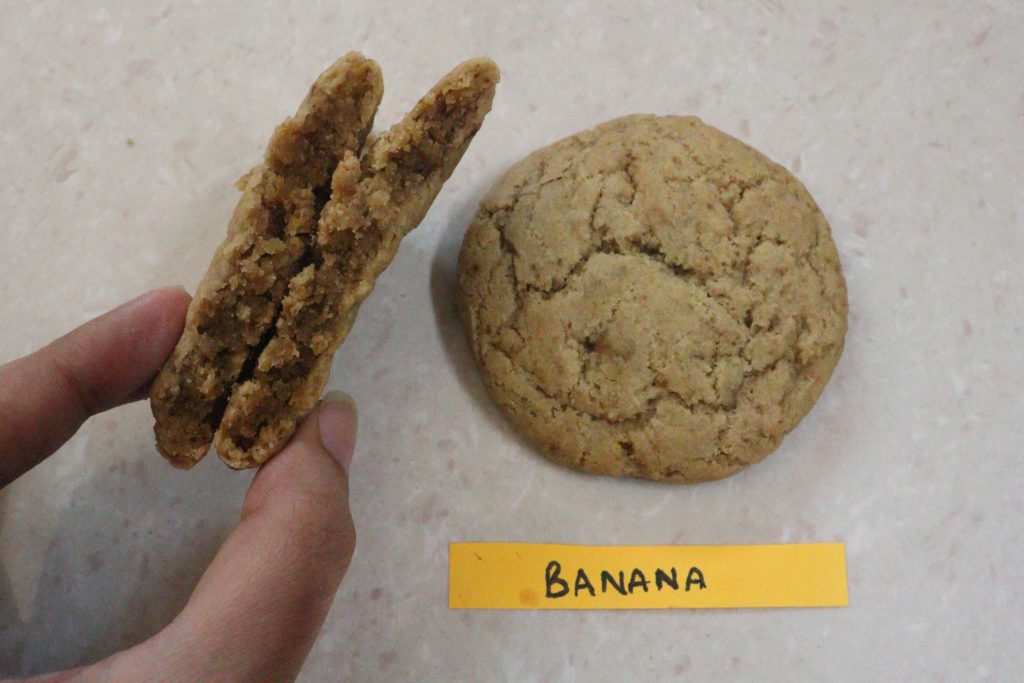 As bananas work well in pancakes and cakes, have a slimy eggy texture and taste great, I was all pumped for this. However, this was a frustrating batch despite yielding the prettiest cookies.

Just like the flax egg, they spread evenly, the cracks were prominent, and they browned well on the top. But they took forever to bake. After 17 minutes in the oven, the insides were very wobbly and there was no way they would firm up while cooling.

Even after a grand total of 27 minutes in the oven, they were gooey and had a sticky bottom that clung to the parchment. Being a natural sweetener, the banana didn’t help the already sugar-loaded recipe. While they don’t mimic egg cookies, these are great on their own. If some sugar was replaced by flour and you enjoy gooey cookies with a banana flavour, these are great.

3 to 4 tbsp unsweetened applesauce per egg 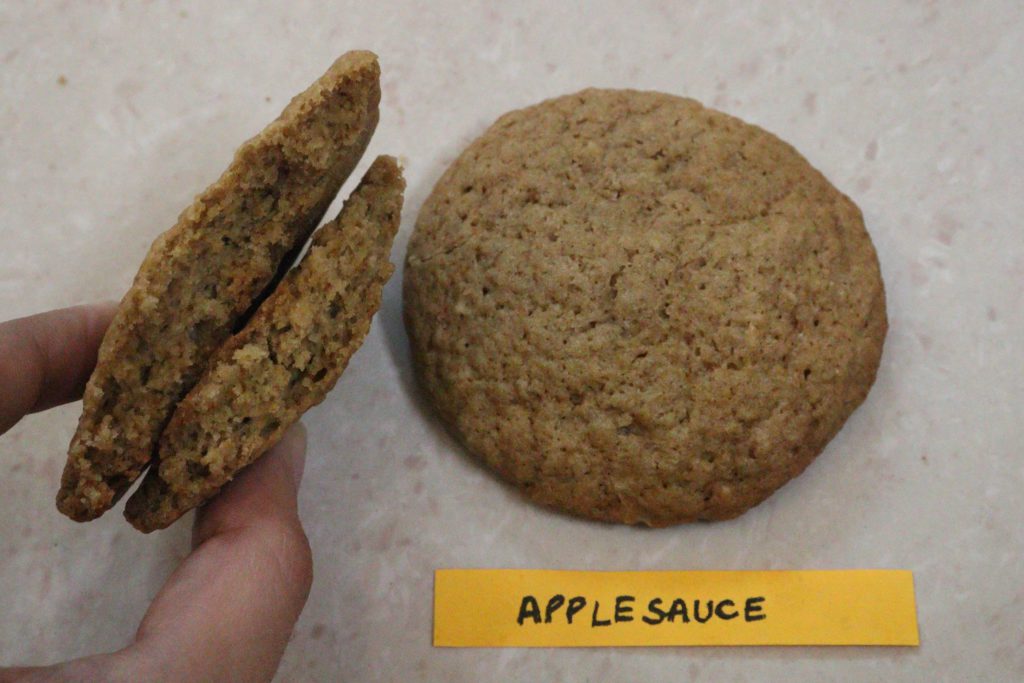 After a series of horrible attempts, this one was a breath of fresh air.

The dough was incredibly sticky even after chilling it, which made me extremely apprehensive of the process to follow. But the cookies surprisingly spread evenly in the oven and required 15 minutes to bake.

I could lift these off the parchment easily, which was a huge surprise. While the shape of the cookies was different from the ones made with eggs, these were moist, spongy and cakey on the inside with a nice crust.

Their size was good too — it felt like a good cookie when you held it — and the biggest surprise was that the applesauce did not lend an added flavour, but rather reduced and balanced the sweetness of the cookies and added adequate moisture.

3 to 4 tbsp thick yoghurt per egg 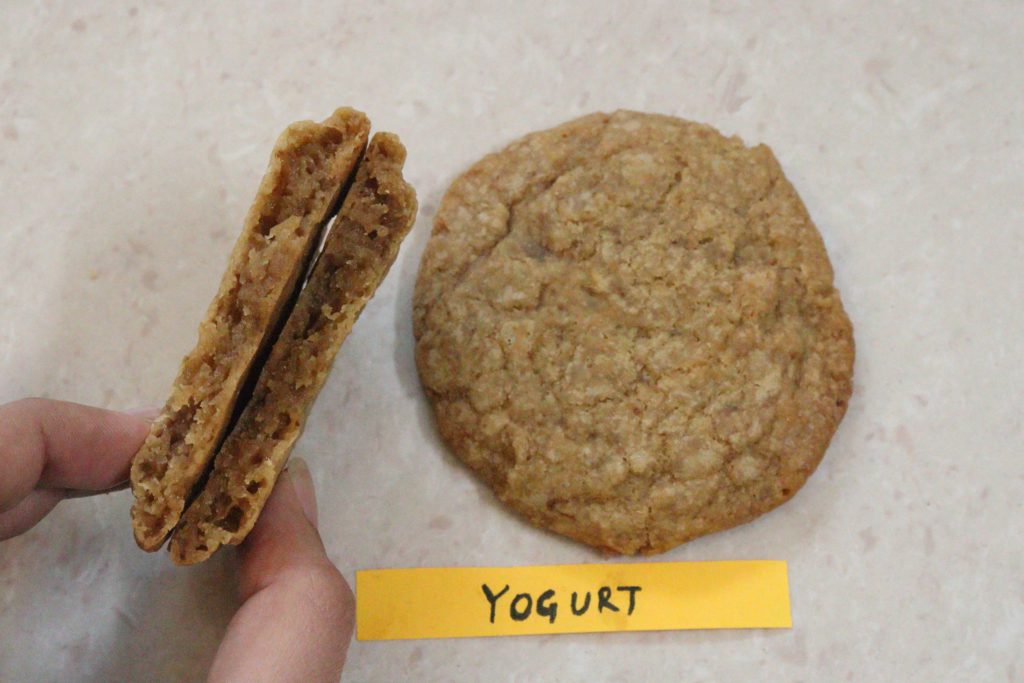 Alright, full disclaimer: I baked a batch with Epigamia’s coconut jaggery yoghurt for a failed round with a different recipe and had to switch to hung dairy curd for the second trial. But from my findings, the vegan and non-vegan yogurts work the same.

These spread evenly into good large cookies and thankfully did not stick to the parchment. Their texture was similar to oat cookies. These took 17 minutes to bake, had a very soft centre and a gooey bottom, but, surprisingly, they held together. A warm cookie from this batch was a delight, but it was particularly sweeter than any other.

When it comes to mimicking an egg, I won’t call it a replica. If anything, it is a substitute for the banana substitute.

3 to 4 tbsp aquafaba per egg 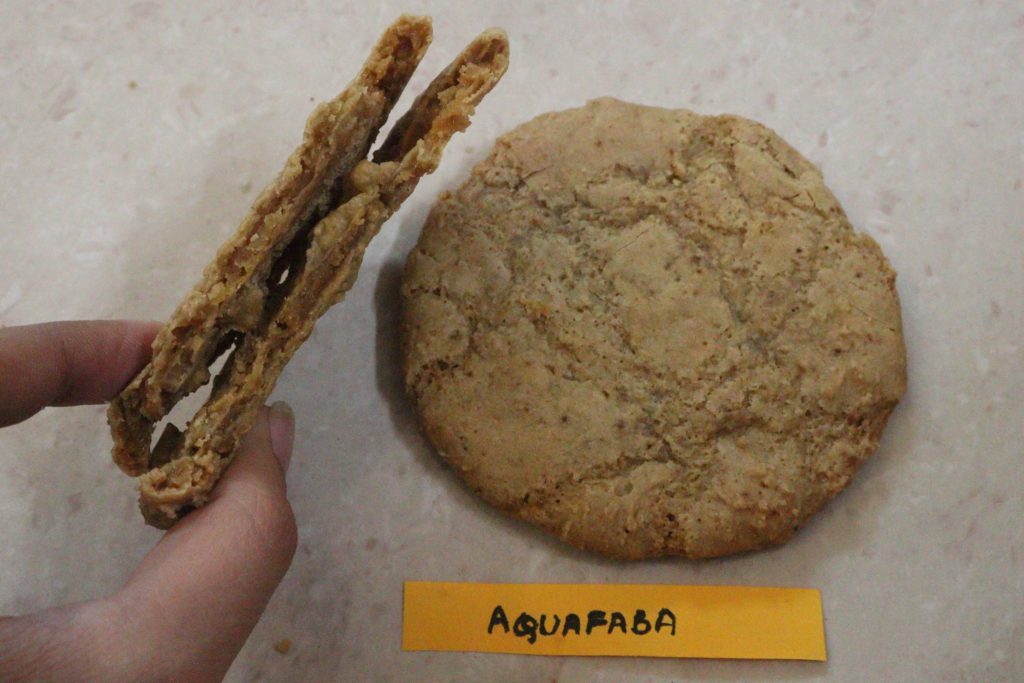 I messed up here, badly. I was extremely excited about this one because it’s unbelievable how bean juice can turn into stiff eggy peaks. I soaked my chickpeas, boiled them the next morning and whipped my aquafaba. It did not work.

It could be because the aquafaba wasn’t concentrated enough or I did not add any wildcard ingredients like cornstarch or it was under-whipped or overbeaten. I did not give this another go, because if it takes so much effort to get a replacer working, it’s probably not worth it.

I used the frothy semi-liquid aquafaba but had to increase the suggested quantity to bind the dough. With so much water content, it wasn’t surprising that the cookies spread too quickly and into crackers. It took them over 30 minutes to firm up enough to not have a soggy bottom.

Upon cooling, they were stuck to the parchment very, very badly. All except one of these cookie broke and none of them were still cooked. These were hard crackers that tasted chalky.

But if you have access to canned chickpeas, using that aquafaba has been known to work extremely well. However, getting the consistency right for the homemade version is quite difficult, and anything other than the texture of canned aquafaba would be bust. 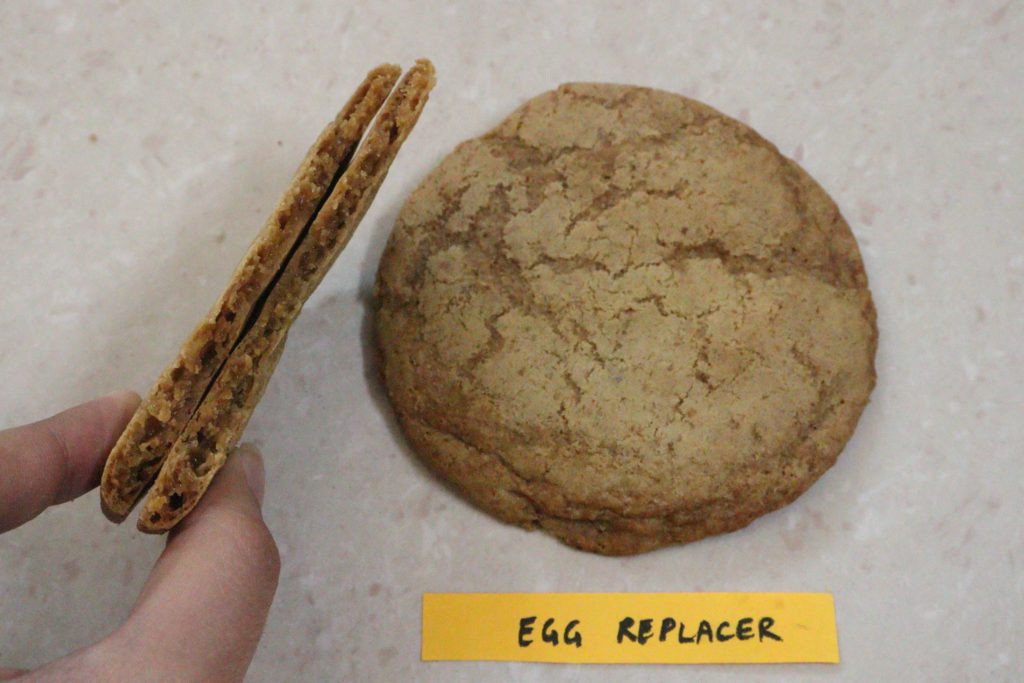 The only egg replacer I could find easily in India was by Urban Platter. While it is not vegan, I thought it would be worth a shot. It wasn’t.

The powdered egg replacer does not require mixing with water or any other liquid. Eggs are required for moisture and binding, and as this was dry powder, there was no way coconut oil would’ve combined everything into a dough. I mixed the replacer with water at a 1:1 ratio to give it some fluidity.

I was soon greeted with pancake cookies that spread way too much. They tasted like milk powder, which only added extra sweetness.

As someone who was racking her brain for a month to find a recipe that works, calling it an easy task would be a big fat lie. I started off with the Food Lab’s Chocolate Chip Cookies, substituting butter for coconut oil and different egg substitutes. I ended up with four oily batches of limp pancake-looking cookies.

That said, this specific recipe uses butter as an essential ingredient. If you use vegan butter, this recipe is a cakewalk, but for someone who couldn’t find it, coconut oil dependency makes veganising it difficult.

If you can identify the purpose played by an ingredient, substitution is not the most difficult task. However, you may not always get mirroring results.

Adapting recipes is difficult but not impossible. It takes experimentation and spontaneity. Despite my fear of eyeballing measurements in cookies, adding extra flour to a dough that looks wonky should not hurt too much. Adapting recipes requires thought and creativity. For some, that comes easy; for others, tweaking pre-existing eggless recipes plays well. Eggs play a very essential role in cookies. When base recipes do not reply on any wet ingredient other than butter/oil and egg, understand that you are looking for a substitute that binds as well as adds volume to your dough.

This is why applesauce won. Apart from the look of the final cookie, this substitute worked exactly like an egg. Flax egg was a close second. Also, make sure you do not introduce too much water, as it adds elasticity and makes your dough expand a lot.

Aquafaba was a pain to work with for this very reason; stiff peaks should hopefully perform better. Having seen our editor Anay Mridul’s vegan adaptation of the Food Lab cookies makes me sure that aquafaba is not a disappointment if done right.

Keeping these pointers in mind, I was surprised that mashed banana and chia eggs did not perform well, given the top two contestants were so close to these. This only proves there are no hard-and-fast rules to baking and tells you about a whole world of gastronomy that cannot be learnt from three internet searches.

Muskaan Gupta
Muskaan is a history undergraduate at Lady Shri Ram College, New Delhi. Having grown up in different cities in India, she is passionate about food and culture. When she's not experimenting in the kitchen, you can find her invested in films and music. She is always looking for new things to do, is interested in studying food history and juggles between her love for filmmaking, writing and knowing the quirks of the world.
Previous articleUK universities are offering climate change degrees for the first time
Next articlePlanting trees with a click: the unlikely tech behind reforestation