A vegan revolution is storming up in Thailand. Locals wonder whether it’s just another health trend or if the plant-based lifestyle is here to stay.

“If you want to be a good chef, you have to kill. That’s what I was always told,” says Ponnapat Lawasut, known as May, head chef and founder of May Veggie Home. The chef was one of the first to enter Thailand’s plant-based scene, opening her restaurant in Bangkok 10 years ago.

“‘Why don’t you open a steakhouse or a fried chicken shop?’ They would ask me. Everyone around me said I would collapse for sure,” she recalls. The chef never listened to cynics, her greatest challenge lay with creating vegan dishes. Today, making something like vegan cheese is as simple as opening Google and following a YouTube tutorial. But back then, Thailand was a stranger to vegan cuisine.

In the back of her car from the other side of Bangkok, Napaphatsorn Totienchai, known as Jajah, tells me she wants her restaurant line to be the next vegan Starbucks. The Veganerie founder has already successfully launched six fully vegan restaurants across Thailand’s capital. Unlike most, Jajah’s transition to veganism came after her mother went vegan.

“She saw What the Health and Cowspiracy and was left in shock,” she says. Nine years after cutting out meat, Jajah agrees that the most difficult part about founding a plant-based business has been having to self-learn recipes.

Jajah and May are only two of the countless entrepreneurs bringing veganism to the heart of Thailand. Like any community, vegans there were in need of a voice.

Joanna Broomfield and Max Hellier, founders of Root The Future, have answered that call. “Root the Future has become our life. We don’t really sleep, or do anything else,” says Broomfield. Thailand’s “voice for vegan food and sustainability”, Broomfield and her husband Hellier started Root the Future in March 2020, after the pandemic interrupted their plans to launch Thailand’s first luxury vegan hotel.

“We had all this energy and there was all this buzz on social media for plant-based startups,” Broomfield explains. “And with people sitting on their sofas with phones in front of their faces, it seemed now was a time to educate people on sustainable solutions,” adds Hellier.

From their annual festival to their Plant-Based Food awards, the duo is on a mission to achieve a mainstream plant-based lifestyle in Thailand. And the key to that is through people’s stomachs. “People love food here. They love pictures of beautiful, greasy food. We’re showing people veganism isn’t just carrots and air — it’s cookies and burgers too,” says Hellier.

While Broomfield was drawn to a plant-based diet because of its health aspects, Hellier didn’t transition until he met his wife. “I was one of those guys who would just taunt vegans. When I met Jo, she highlighted my love for animals. It had never occurred to me before — the connection between loving and eating animals,” he recounts.

Vegan YouTubers and creators of the Plan V page Gam Chonnikarn and Goy Hatairat also went plant-based for their love of animals. The sisters transitioned at different times, but have both been vegan for almost four years and channelling their passion for food, lifestyle and animals since the very beginning. While Gam describes it as a passion project, she says every time they convince a meat-eater to opt for a vegan meal, they succeed in their own way.

‘Meat-lovers want to feel the same’

Food plays an important role in Thailand’s culture. Broomfield and Hellier first came to Thailand on their honeymoon four years ago. After realising how extraordinary the food was — they made an instant decision to move. “We picked up our adopted cat and a month later, we moved here,” says Broomfield.

Thailand is also a very family-oriented country and Hellier says veganism can become a bit of an issue when it means rejecting food that’s being offered.

“The hard part is talking to your family. Some are supportive right away, but some doubt your choices, maybe even out of care. It’s a good thing, though, because when people doubt you, you gather more information to prove your point,” explains Goy. While she and her sister never had much trouble at family gatherings, the YouTubers say being plant-based has proven quite challenging on outings with friends and associates. “When you’re with people you’re not close to, like your colleagues, you feel like you’re being picky or have to make special requests,” Goy adds.

May says around 97% of Thai people are meat-eaters. While they balance that out with lots of vegetables and fish, fried chicken and pork are still vastly consumed in the country. Broomfield points out this is because many locals believe plant-based protein isn’t real protein. “We’ll be having vegan food with a friend and they’ll say: ‘Oh, I’m getting my real protein for dinner,” she says. 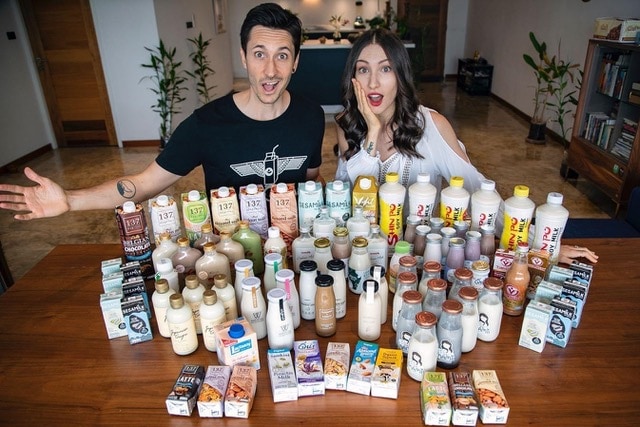 Root The Future believes the best way to get locals on board is through veganising Thai cuisine. Jajah says this is simple. With an abundance of cheap and fresh ingredients, she says plant-based cuisine should be a natural part of the diet. “In 2020, Thai people really started to learn what veganism was,” she says.

Her restaurant is the first in Thailand to cater to more omnivores than vegans. And while it’s important to feed locals with flavours and dishes they already know, unless the presentation is the same, she says you can’t successfully feed a meat-eater plant-based alternatives. “Meat lovers want to feel the same. If it’s totally different, they won’t try it,” she explains. Jajah’s success is not only notorious in Thailand. Last year, she was invited to Oman as the first vegan and female chef to cook in Salah’s first-ever 100% plant-based festival.

Read our World Vegan Month story about being vegan in Thailand with actor Richie Kul.

May believes veganism suddenly boomed in 2020 because it’s a trend. “Why are there 1,000 branches of Starbucks shops in Bangkok? Because Thai people love holding a brand in their hand,” she says smiling. This trend begins with Thai people’s concerns with health.

Gam and Goy have seen a recent surge in interest in their page, and not just from vegans. They are seeing comments and likes from people concerned with health too. While Root The Future says more ‘Farangs’ (what local Thai people call foreigners) label themselves as vegan, locals tend to choose plant-based options without boxing themselves in with the label.

“We’re not a holistic health-concerned country, it’s more to do with beauty, fitness and diet,” says Goy. “More than saving the world, it’s about personal health. Nowadays, celebrities, actresses and Thai models give ideas of the shape people should be,” explains May. The chef says veganism is more than just food though, so people should even be avoiding things like animal-sourced shampoo. In Bangkok, it’s really only about the food.

Online, though, Gam and Goy say it’s a different story — especially amongst the younger population. They are members of the Facebook group Vegan Thailand, which is seeing a rise in young voices speaking up about the planet and the animal agriculture industry. “The new generation reacts to social and political issues, like climate change or racism. They are keen on gathering information and seeking the truth, and it’s getting people to be more flexible with their diets,” Goy says.

Jajah is a huge supporter of animal rights. Her mother rescued an injured chicken off the streets of Bangkok a few years ago and she says he has become a valued member of their family. “He’s like a mix of dog and cat: he’s independent but he’s very sociable,” she says. The entrepreneur believes having chickens as pets helps us see them as equals. “We only see chickens as food because that’s what companies want us to believe — but those aren’t the facts.”

Veganising Thai cuisine from home is very simple according to Gam and Goy, who say they’ll usually go for a stir-fry. While Jajah admits her love for quesadillas and tacos, her go-to Thai dish is a Som Tum Thai. Broomfield and Hellier, on the other hand, are huge fans of Miang Kham. The dish is a simple combination of fragrant leaves, onions, garlic, pomelo, peanuts, chilli and ginger.

Outside the kitchen, Thailand is home to an array of up-and-coming vegan restaurants. As well as Veganerie and May Veggie Home, some of these include Vistro — voted “the people’s favourite” in Root The Future’s awards — Swees and Nature’s Charm.

Bonita Cafe and Social Club is Gam and Goy’s favourite spot. It’s owned by a Japanese man and his wife, and was the first in Bangkok to get a rating on HappyCow.

Hellier and Broomfield constantly refer to Golden State, a restaurant specialising in plant-based fish. After kicking off their menu only a few weeks ago with a watermelon poke bowl, they now offer vegan scallops, crab cakes, lobster rolls, and much more.

Hellier recalls the most difficult thing he had to give up when he first transitioned. “I was a complete cheese addict.” Back then, he says vegan cheeses were nowhere near as easy to access. Today, this is a very different story, with eight brands on offer in Thailand alone. “It’s not even a cheese country,” he adds.

May agrees the vegan community has grown a lot since she started May Veggie Home. And while she has received a lot of offers to expand her restaurant, she wants to remain where she is. “Quality is more important than quantity. I’ve got investors contacting me from all over the world, but until I find someone with the same mindset as me — I won’t reach out,” she says.

This is mainly because she believes good Thai food cannot be served to the masses. “Everything has to be cut and prepared freshly,” she adds.

But over at Veganerie, Jajah has very big goals. “We want vegan eating to be a part of the normal routine, not overthought, to be as simple as meeting a friend at a Starbucks,” she says. The company is also working on launching its own line of supplements, as well as delivering food through an online service. 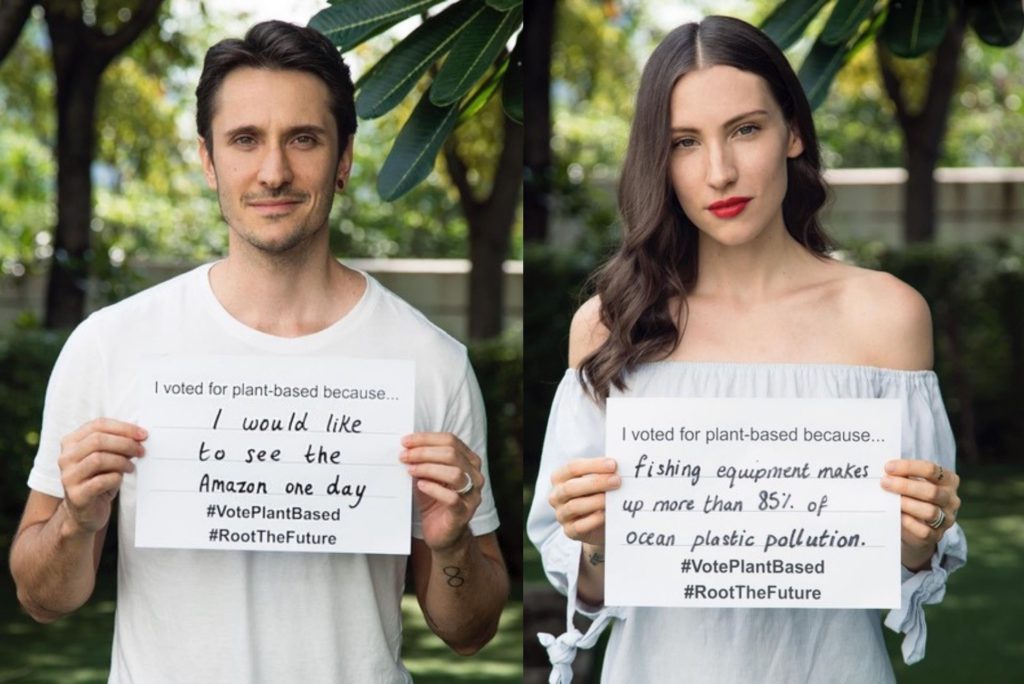 Root The Future also has a mission of expansion. Fast, cheap food is very accessible on the streets of Bangkok, and Hellier and Broomfield want this to be the same for all food — including plant-based. While they don’t want to drive the price of veganism down, their ultimate goal is to make the vegan lifestyle accessible to all.

May says she has already been through the hardest patches of her career, with Covid-19 just being another small obstacle for her business to overcome. She isn’t interested in making more money with May Veggie Home. This year, she will be starting to branch out as a consultant to people who want to open a vegan or vegetarian restaurant. Making formulas, creating menus, and preparing teams are the hardest parts about launching a startup — even for something as little as a kiosk. So May wants to be that aid.

“It’s not about becoming famous; sometimes you should sacrifice yourself to help others,” she says. “That’s a true vegan: showing mercy for animals, for the world, and for human beings.”

Olivia Rafferty
Olivia is the Assistant Editor of The Vegan Review. An aspiring Middle Eastern correspondent currently studying journalism at City, University of London, she is passionate about the planet, she believes veganism is the first step to solving the complexities of climate change.
Previous articleHow to be more eco-friendly: the best cleaning products
Next articleIs Nutella vegan? A look at its ingredients and alternatives