The 17 most unhelpful vegan clichés 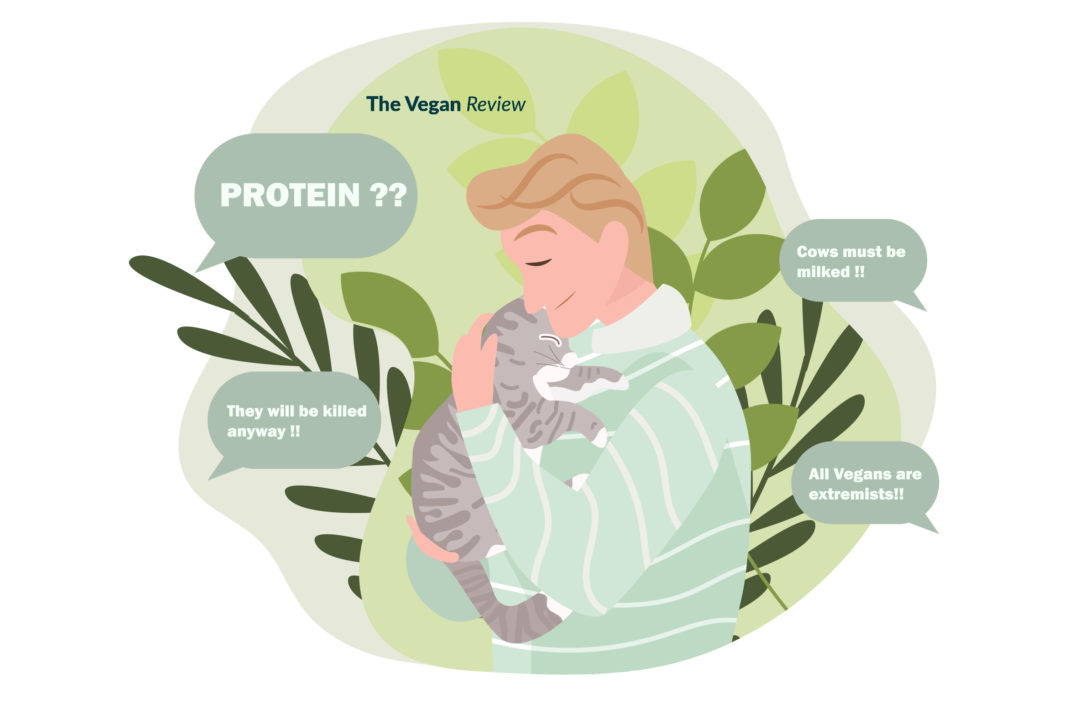 It’s safe to say that most vegans have heard their fair share of clichés and been quizzed about outdated stereotypes, but which are the most annoying and unhelpful?

Ahh. The humble cliché. Not as intellect-stretching as a clever pun but certainly considered just as worth sharing by whoever is spouting it. As much as we love a little lighthearted humour (see point 7), maybe it’s time to put the following lazy assumptions to bed, once and for all.

Here are a few of the most annoying and unhelpful clichés surrounding the vegan lifestyle.

1. We preach all the time 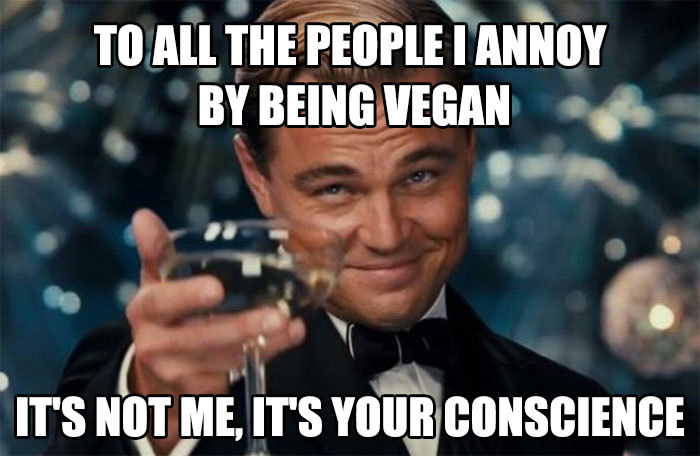 We all climb down from the pulpit now and then because the basis of our lifestyle is centred around the principle of ‘live and let live’. Eat all the beef you want: they are your arteries and you are imagining the death stare and sermon.

Hard no. We honestly don’t miss bacon, steak or anything else you want to ask us about. We also wouldn’t eat that pig if we were stranded on a desert island with it. And why is it always a pig? What if we were marooned with a manatee? Wouldn’t eat that either, FYI.

3. We think we’re better than everybody else

Honestly, no. Our ethics are exactly that: ours. We don’t expect you to follow our path and nor do we think of ourselves as above reproach or deserving of more respect. If our lifestyle makes you feel bad about yours, that potentially says more about your own mindset.

Here’s the hot take on kale: not everyone loves it, vegan or not. It’s green, it can smell pretty farty and you can taste it in smoothies. It just so happens that some of us don’t mind all of these traits. A seasoned kale chip? Delicious. A raw head of kale chomped straight from the field? Not always a treat.

5. We are all hippies

The modern world makes it hard to live a hippie existence. Most of us are wired into the grid with our mobiles and laptops, we shop at supermarkets and have paying jobs, often for large companies.

That doesn’t make us less vegan though. It just means we are choosing a lifestyle and making it fit in with our circumstances and the time we live in. That’s not to say that a summer of love wouldn’t be nice after all these lockdowns, though.

6. We talk about nothing else

Passionate vegans can usually find a way to bring the conversation around to plant-based topics, but we do like to talk about other things too. Why only today, some of us at The Vegan Review were talking about alpacas, the upsides to toasting potato waffles and roller derby. How’s that for diversity? 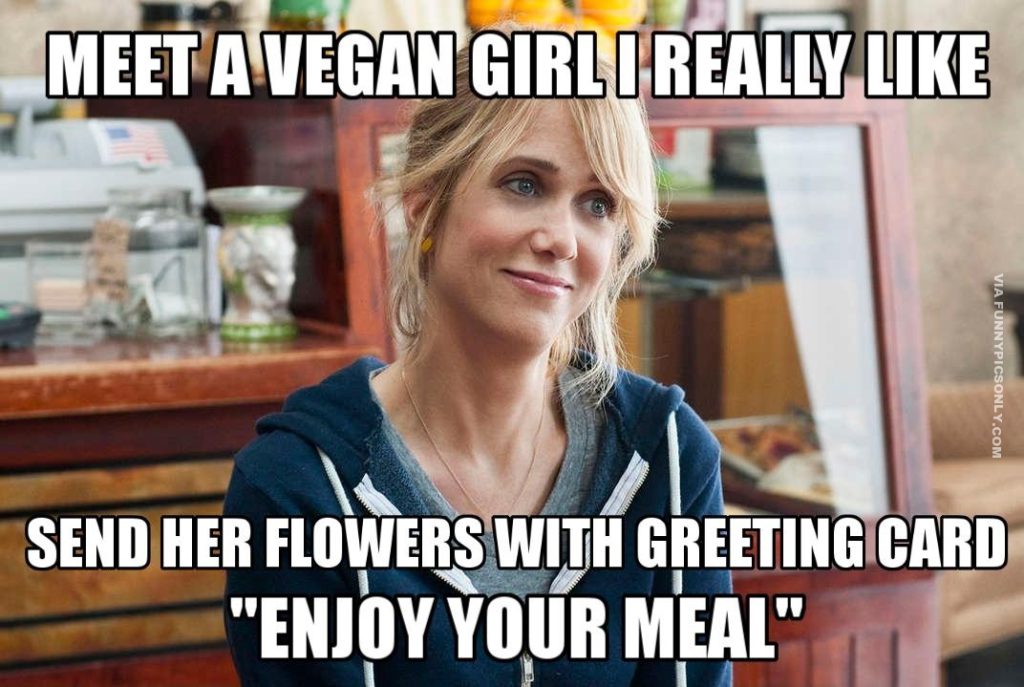 How do you know who in the room is a vegan? Don’t worry, they’ll tell you. And other such “hilarious” jokes at our expense that we’ve all giggled at good-naturedly to avoid the non-vegan performer from feeling awkward about the tumbleweed blowing through the room. Tell a genuine ripper and vegans will laugh along with everyone else, but be original and don’t stick to outdated clichés.

8. We lack protein/iron/calcium* (*delete as applicable)

Come on now. Ever heard of a balanced diet? Supplements? Fortified plant milks? We all have, which is why our macros are exactly where they need to be. But thank you for checking in. Where did you complete your qualification in nutrition, by the way?

Read our guide to daily protein needs to make sure you’re up to speed.

9. We should all be skinny

Don’t blame us for the fact that Coop doughnuts are vegan-friendly, or that takeaway pizza chains saw a gap in the market and started making delicious treats for us all. We might not all be rocking a 26-inch waist, but we can live with it. 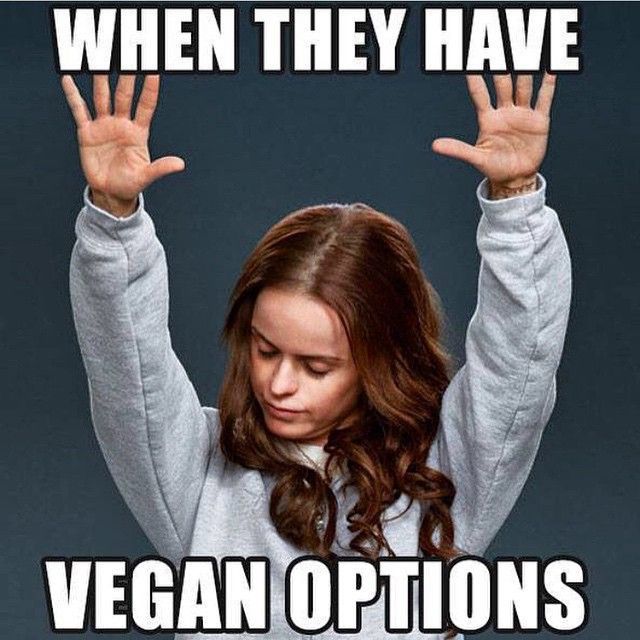 In general, we are a pretty easy lot. Plenty of pasta and rice dishes can be made animal-free, all fresh produce is a given and these days, there are plenty of junk options too. It can get a little trickier when gluten-free is added into the mix, or something really niche, such as raw veganism, but just ask what we want. It’s as easy as that.

11. We are only vegan to awkward

Afraid not. We believe in something, whether that’s our own health, the wellbeing of animals, making a positive impact on the environment, or all three combined. There aren’t enough hours in the day to change our lives in order to just be annoying.

12. We put tofu in everything

Given half a chance, we would. Just kidding, but it is a versatile, easy-to-flavour and heart-healthy source of protein, so where’s the catch? That’s it seems a bit weird and scary? That it’s just bean curd? Give tofu a chance.

Find out how tofu became a surprise comedy commodity in the face of proposed labelling bans. 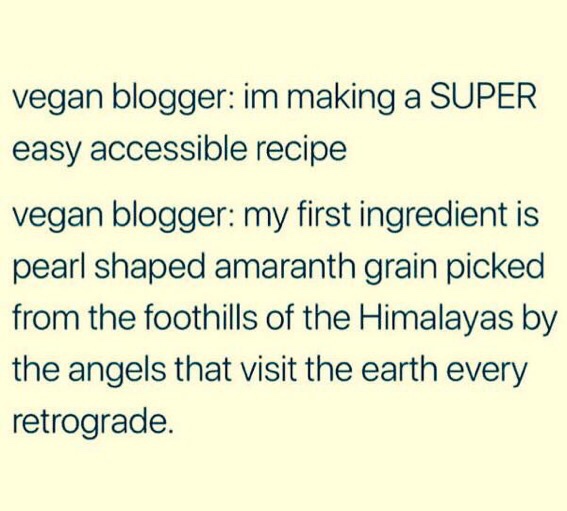 While this isn’t a cliché just limited to vegans, gorgeous food photography is something to be enjoyed, for sure. But we don’t all have the skills or patience to create it. Actually, some of us don’t have the inclination either. Don’t get us wrong, our pittas stuffed with beetroot and sweet potato taste good, but on a good day, they look like a culinary car crash.

If anyone tells you that oat milk tastes the same as dairy milk, please get their taste buds tested. It’s not that we think plant alternatives taste the same at all, but that they are a delicious and cruelty-free substitute.

Read our in-depth review of the UK’s best oat milks.

15. We are ‘forbidden’ from enjoying certain foods

Never forget that being vegan is a choice and one we all make willingly and with knowledge to hand. It’s not a case of missing out or not being able to eat certain “treats” — it’s that we don’t want to. And that’s no bad thing, it means there are more to go around.

16. We are obsessed with avocados 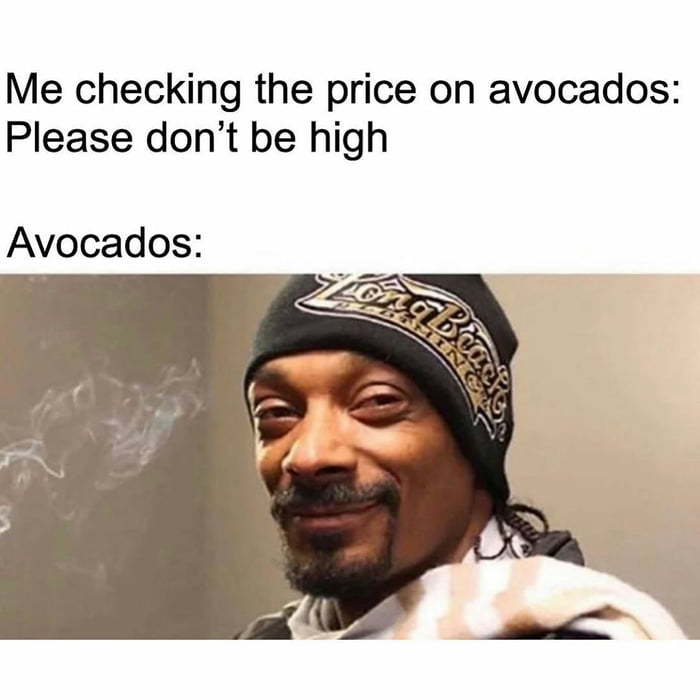 They’re okay. They work well in sandwiches, salads and can be nice hot as well as cold. They seem to work well in smoothies and yeah, we have a few t-shirts with them on. But obsessed? Maybe just enthusiastic. All it takes is one over or underripe stringy one to put us off for a while though.

17. We prioritise animals over humans

It’s easy to see why this is a cliché, but in reality, vegans simply want to be the voice that animals don’t have. We don’t place them above humans, simply because we don’t think there should be a scale at all.

The dream is to all live peacefully on the same planet, with humans not seeing all other creatures as theirs to hunt, eat or otherwise interfere with. Yes, many of us have pets that we cherish, but that’s a whole separate topic.

Are we all avocado-loving hippies with a touchy sense of humour and an in-built desire to preach? No. That’s not to say that there aren’t a few about though.

Amy Buxton
Amy is a committed ethical vegan, raising a next generation compassionate human with her husband and their beloved dog, Boo. A freelance writer with a background in PR, she decided to use the COVID lockdown period to refocus her client base and has come to The Vegan Review as a senior writer and editor, before moving into her external content director role. "What we should be doing is working at the job of life itself" is Amy's mantra, courtesy of Tom from The Good Life.
Previous articleShould children learn about veganism in school?
Next articleTHIS Isn’t Bacon Lardons review: upgrading carbonara for vegans