Which is the best vegan Easter egg of 2021? We taste-tested 7 to find out 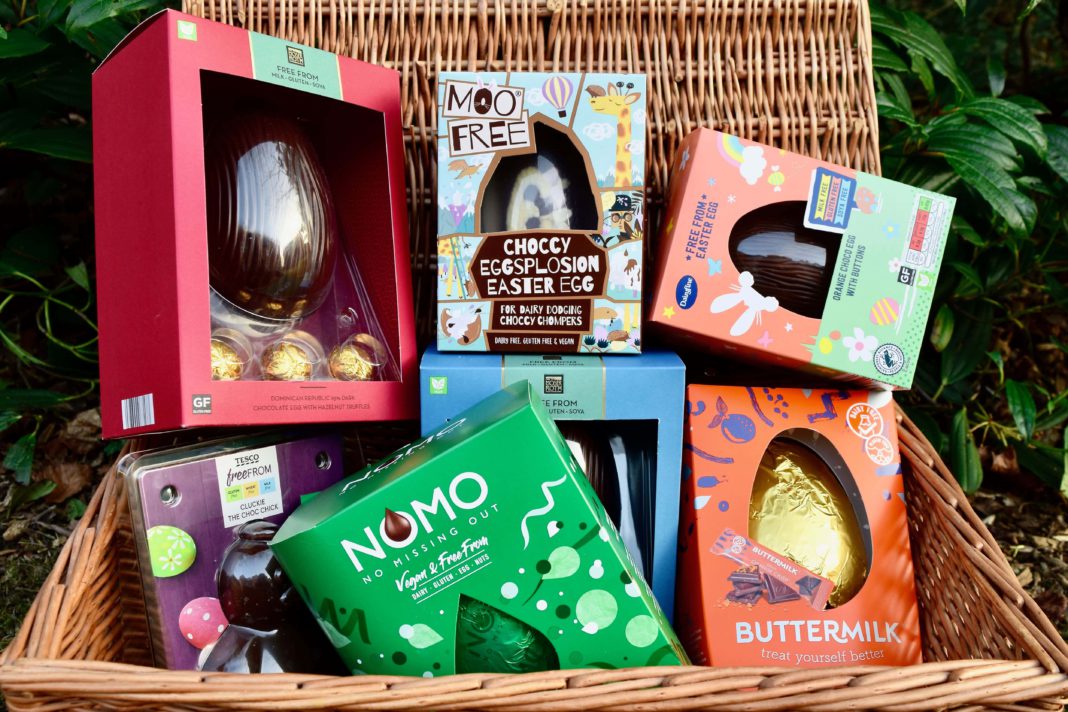 A vegan and a non-vegan try seven of the new-to-market vegan Easter eggs for 2021 to see which is truly the best of them.

Chocolate lovers, rejoice — there’s just one month to go until Easter. Supermarkets shelves are already chock-full of Easter eggs, with many boasting a more extensive vegan range than ever before. Whether you’re a diehard for dark chocolate or a sweet-toothed milk chocolate fiend, there’s certainly something for you in the 2021 UK Easter egg lineup.

We tasted seven newly released vegan Easter eggs for 2021 in search of the perfect product. To make the test more objective, we’ve roped in non-vegan Sam Mottram. He’s a sucker for creamy milk chocolate and has an insatiable appetite for Cadbury’s Creme Eggs, so he didn’t go easy on this dairy-free confectionery.

Can any of the 2021’s vegan Easter eggs win over both vegans and non-vegans alike? Here’s our review. Amy Nicholas: If you don’t like chocolate orange, this is not the egg for you. The flavour is quite overwhelming, although the bitterness of the orange does cut through the sweetness of the chocolate nicely. The crispy pieces are too small — I would have preferred that they up the crunch or keep it smooth. Points for the thickness of the chocolate and plastic-free packaging; I just wish the orange taste was slightly more subtle. 3.5/5

Sam Mottram: This reminds me of Terry’s Chocolate Orange, but just not as good. If I was being polite, I’d say it was more fruity and slightly sharper. The chocolate is creamy, but it’s not for me. 2.5/5 AN: This reminds me of the Easter eggs I used to get as a child: fun, simple, and very sweet. The white chocolate and marshmallow slab is gorgeously chunky, though the marshmallows weren’t as pillowy soft as I was expecting. It’s a tad too sugary for me, but I reckon it’s a safe buy for fans of milk chocolate. 3/5

SM: This is very sweet, but in a good way. The white chocolate front reminds me of the white chocolate snowies you get in a pick and mix. The fact that it was so sweet disguised that it was vegan milk chocolate. I’m a little disappointed in the varying thickness of the shell, but it is a nice Easter egg on the whole. 4/5 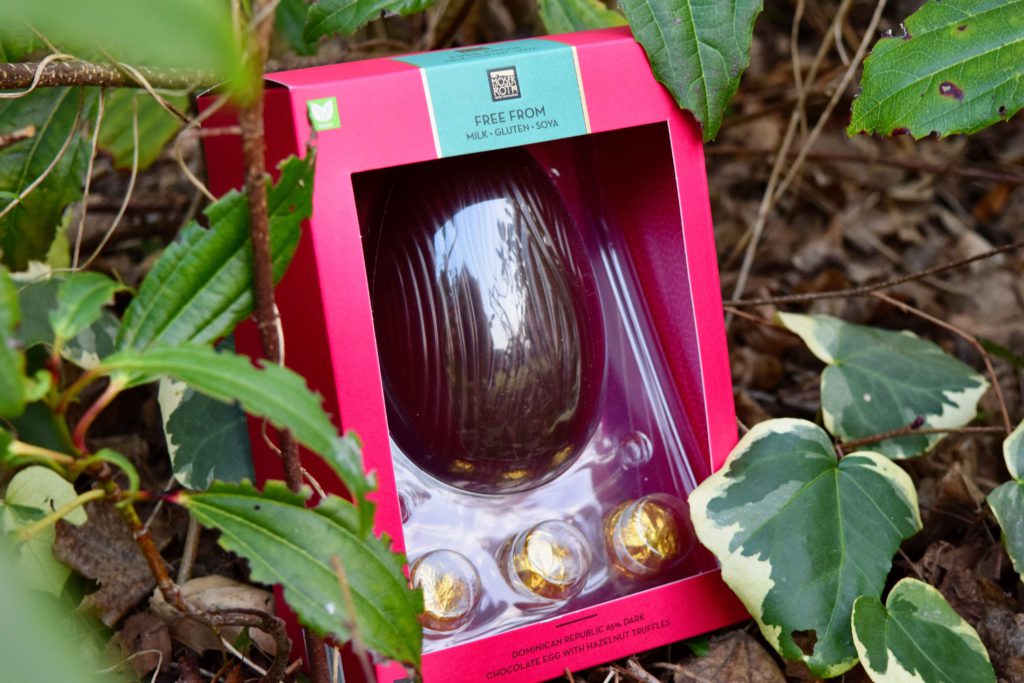 AN: I feel like this is the most grown-up of 2021’s vegan Easter eggs. Yes, some might call it boring, but I enjoyed the clean, uncomplicated flavours. The 65% chocolate is creamy, and, at last, I don’t feel like my tastebuds are being bombarded by sugar. It’s a cracking (pardon the pun) dark chocolate egg, which is only surpassed by the to-die-for hazelnut truffles it comes with. With a thick chocolate shell and soft hazelnut centre, these three little foil-wrapped treats are so delicious that words can’t do them justice. Frankly, I’d buy this egg again just for the truffles. 4.5/5

SM: The hazelnut truffle was fantastic; it’s almost indistinguishable from a regular chocolate truffle and, on its own, gets 4.5 stars. However, thanks to the egg, my rating has to drop dramatically.

Honestly, if this is a poster child for vegan chocolate, I want nothing to do with it. It’s precisely this kind of chocolate that gives vegan chocolate a bad name. The egg gets one star, but I’ll bump my rating up based on those truffles. 2/5 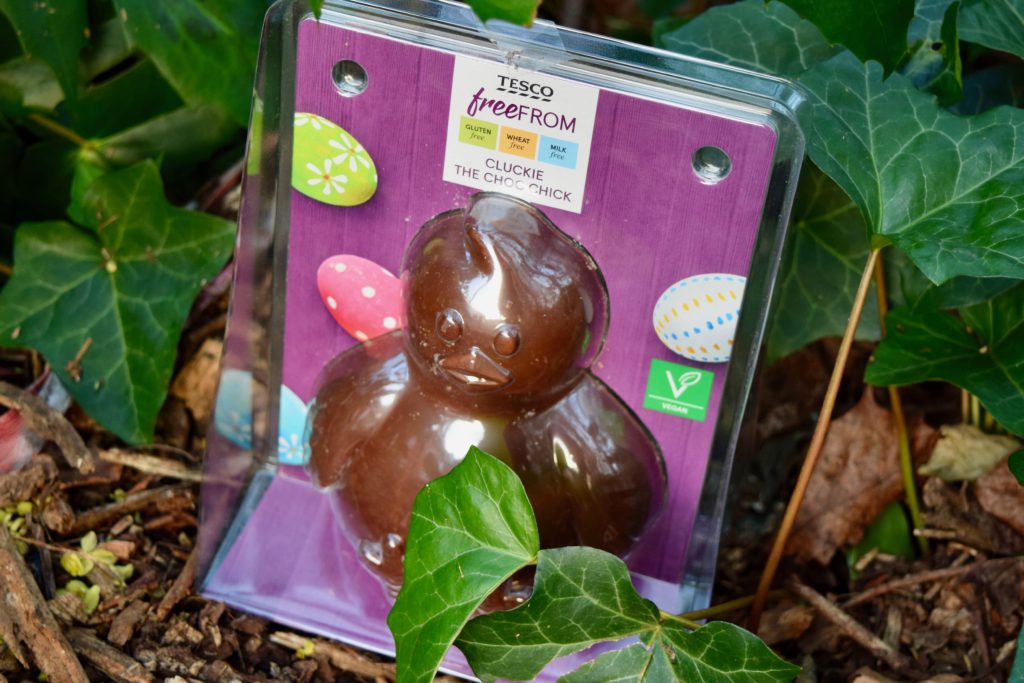 AN: Cluckie wins points off the bat for its adorable shape. This is exactly the kind of egg I would have refused to eat as a kid because it was too cute to break. It’s just as sweet as it looks, but not so offensively sugary that you feel sick after a few bites, and it does have that buttery smoothness. Okay, it’s not the highest quality, but I’m hooked in by the nostalgia of this egg, and at only £3.50, it’s pretty good value too. 4/5

SM: My first thought is that this tastes like advent calendar chocolate. It’s got the texture of actual chocolate, but the flavour is lacklustre. It’s definitely palatable. It doesn’t taste of not-milk-chocolate, it just doesn’t really taste like fantastic chocolate either. 3/5 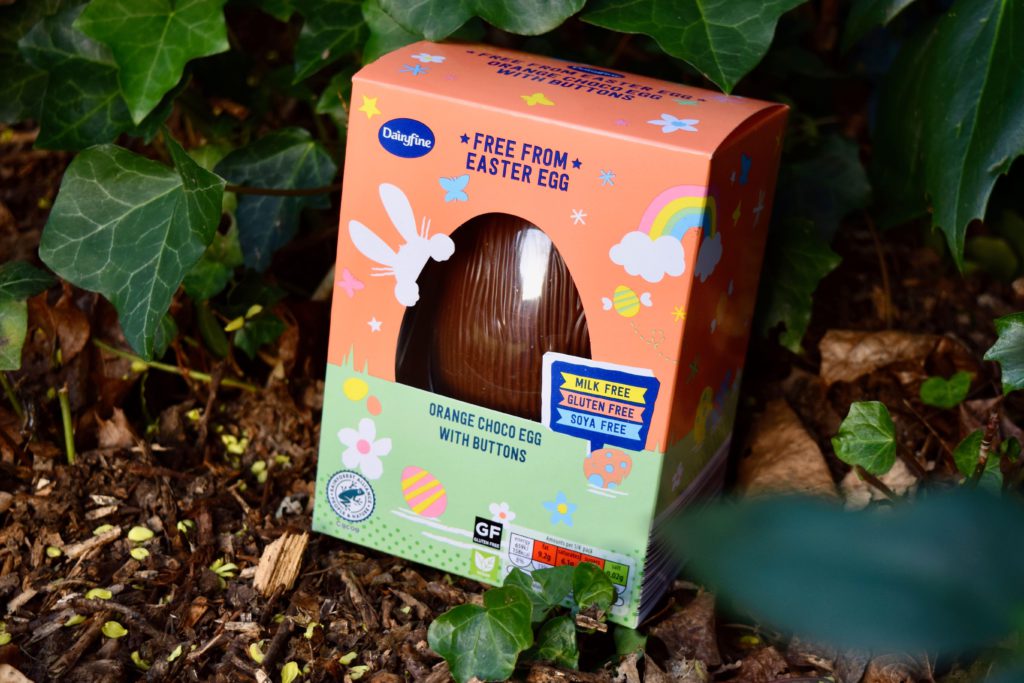 AN: I think I understand now why people don’t like orange chocolate. This is not good. The orange flavour is artificial, the sweetness is sickening, and the texture of the chocolate turns to powder in your mouth. The chocolate buttons that come with the egg are just as disappointing; they are so chalky that they left a coating on my teeth. In fairness, the price is good, but that’s pretty much the only positive thing I can say about this offering from Aldi. 1/5

SM: I don’t want to be too harsh, but frankly, this tastes like a chocolate orange flavoured protein bar. It’s very artificial. The package says it is milk-free, and you can tell. The texture was appalling — the least enjoyable of all the eggs we tasted. 1.5/5 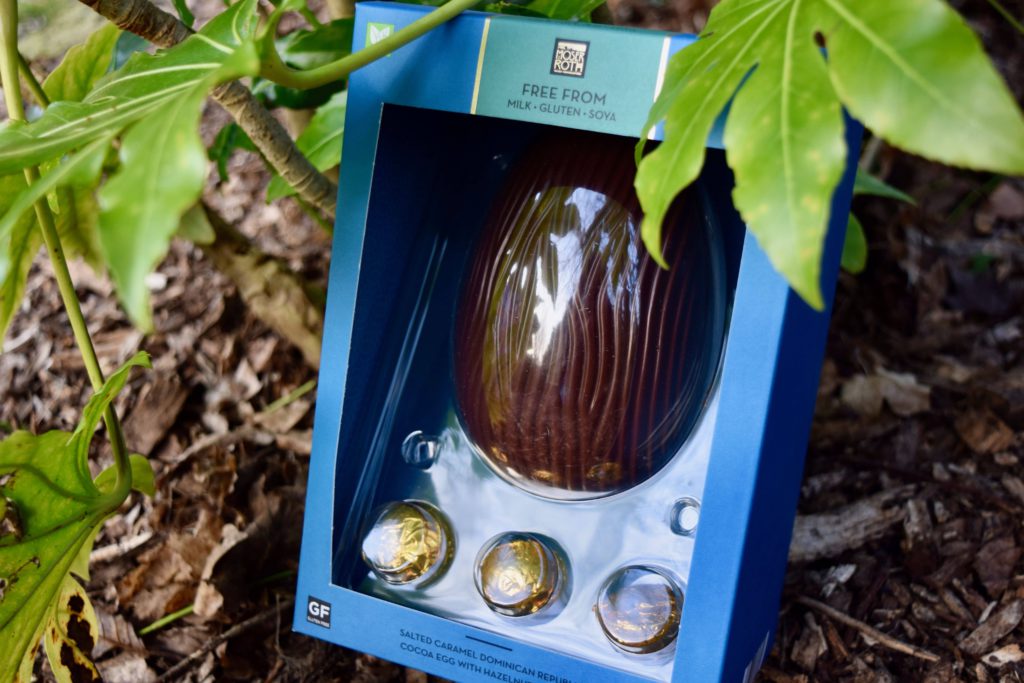 AN: My tastebuds must be all over the place after tasting so much chocolate because I’m getting a hint of mint in this salted caramel egg. Much like the other Moser Roth egg, the thickness and creaminess of the chocolate is great, and the flavour is nice enough. Predictably, it’s a bit sweet for me, but the salt balances out the caramel to make it more palatable. And it comes with three more of those heavenly hazelnut truffles, so that’s got to be worth at least three extra stars. 3.5/5

SM: Just opening the plastic box, I was immediately put off by the smell of the chocolate, and the flavour didn’t win me over, either. There’s too much salt in the egg. It tastes like somebody messed up the recipe and kept on trying to tweak their way out of it by adding salt and caramel. Unlike the Mona Lisa, they should’ve just stopped and started again. The hazelnut truffles are very good, but again, they are let down by the egg. 2/5 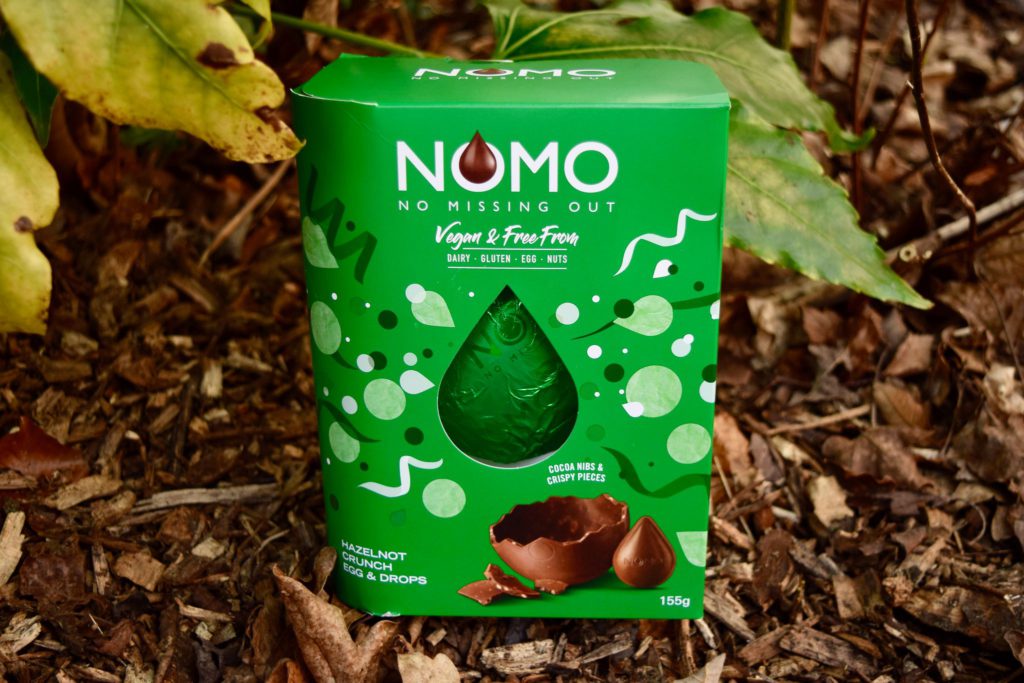 AN: Full disclosure — I’m a big fan of NOMO so I had high hopes for this egg, and it did not disappoint. The chocolate is velvety and indulgent, and the crispy rice pieces are the perfect size to give the egg a bit of bite. The accompanying hazelnut chocolate drops are equally tasty, and it’s especially luxurious given that it’s only £6. A solid offering from NOMO. 5/5

SM: My initial thought is that it smells of grass, but it tastes of a Ferrero Rocher. However, I don’t really like Ferrero Rocher, so this test is somewhat flawed from the start. You can tell that it is good, silky chocolate, and I’m impressed by the creaminess. I’m sure I would have liked this more if it wasn’t hazelnut. 3.5/5

AN: The NOMO Hazelnot Crunch just clinched it for me in the battle of the eggs, but the Moser Roth hazelnut truffles stole the show. They feel like the kind of chocolates you’d save for special occasions, and after the past year, I’ll take any opportunity for extravagance I can get. If Aldi would like to start selling them as a standalone product, I’ll be the first in the checkout queue (though I may need to give my stomach a rest first).

SM: I should have not have agreed to do this in one straight sitting as I now feel quite sick. The eggs are much more similar to cow’s milk chocolate than I initially assumed, especially compared to some of the cheaper Easter eggs you can buy. However, I think there’s still a lot of room for improvement. The Moo Free egg wins for me on all fronts: flavour, value, and most satisfying.

Amy Nicholas
Amy is a regionally and nationally published journalist. Having finally broken up with dairy during Veganuary 2018, she believes that our diets are one of the biggest personal changes we can make in tackling the climate crisis, though she also advocates for urgent, systemic action. Amy recognises the intrinsic link between climate activism and social justice, and feels we must address both with the same energy and urgency. When not writing, Amy is a performing arts teacher, and loves nothing more than belting out show tunes in her kitchen (much to the dismay of her flatmate).
Previous articleJordi Casamitjana: ‘Confronting my own inconsistencies showed me the path to ethical veganism’
Next articleBerkano Foods: New Zealand’s leading plant-based food service