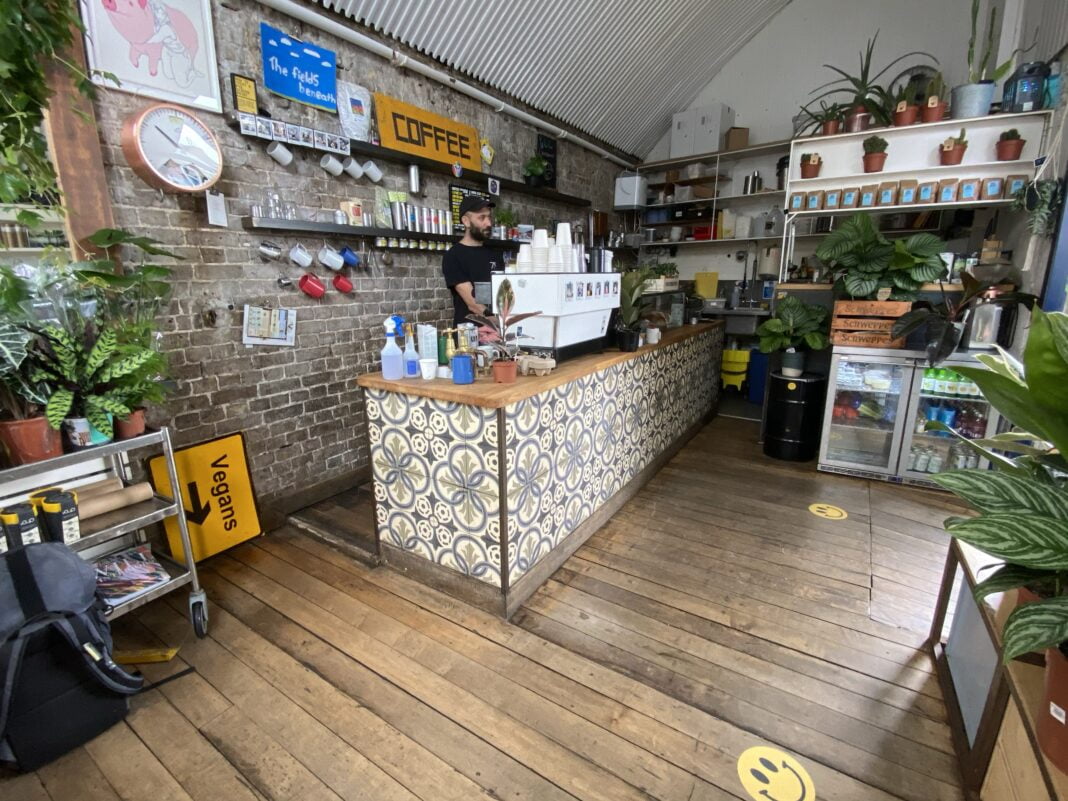 The Fields Beneath owner Gavin Fernback talks paper cups, alt-milks and operating one of London’s only fully vegan cafes.

“Paper cups are a sham.”

Tucked underneath the Kentish Town West railway arch, adjacent to the Camden Town Brewery, is The Fields Beneath. It’s a tiny cafe beloved by the locals, sharing a wall with the Overground station (walk 10 feet and you’ve gone too far). Inside, there’s a classic Camden-y red brick wall behind the counter, with shelves of plant-based milks, bags of freshly-roasted coffee, packets of triple-baked granola, and an impressive selection of vegan food in the pastry case. The place smells like a dream.

You’ll also find plants everywhere: atop shelves, cabinets, counters, wherever there’s space. There are books about plants, a guide to veganism in North London, and Gillian Tindall’s history of Kentish Town, the cafe’s namesake.

It’s owned by Gavin Fernback, who’s about to launch a tirade on paper cups, after I ask him where I could recycle the cup he made my espresso in.

“This is made out of paper,” he tells me, pointing to my disposable cup, “but more carbon goes into this than polystyrene cups. Because you’ve got to cut down a tree, put it on a truck that uses diesel, and drive it to the paper mill, whereas the plastic companies that make polystyrene are next to the oil refineries.” 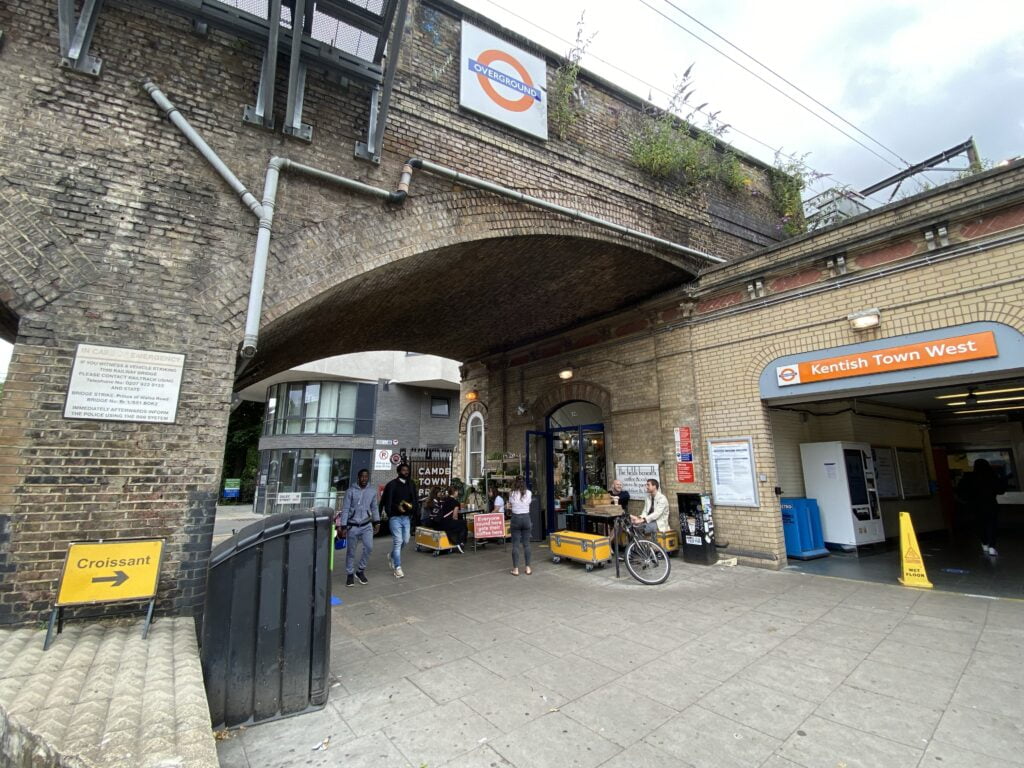 It’s an age-old debate in the coffee industry: what’s the solution to the paper cup problem? The UK uses 2.5 billion of these disposable coffee cups every year, but only one in 400 are recycled. A host of companies, including KeepCup, HUSK and FrugalPac, have tried to come up with alternatives; but Fernback says the only solution is to ban them.

“Otherwise, you’re just polishing a turd,” he says, the turd being single-use cups, of course. “You try and make it look really nice by saying you’re using compostable ingredients. But they’re not compostable.”

Such ‘biodegradable’ cups are typically made from corn starch. In the US, the majority of industrial corn is grown by Monsanto. Its use of Roundup, a glyphosate-based herbicide, has led to 13,000 lawsuits against the company for allegedly giving people cancer. “And then we line a cup with it and write the words ‘Planet Harmony’, and suddenly you think you’re doing something good,” notes Fernback. “And that’s why it’s bullshit.

He has a fascinating take on sustainability: “No matter how much you say something’s sustainable, my view is, you can only be less unsustainable. What are you sustaining? If you offset your carbon, you’re just defecting carbon somewhere else.”

It’s a conversation that gets interrupted quite a few times, as customers pour in to order their morning coffee and chat with Fernback and chef Keke, who masterminded the cafe’s vegan treats. Both of them worked during lockdown, as the coffee shop turned into a grocery store. They started selling plants, transforming the place into a “plant jungle”. And that’s one way to put it, I wonder, surrounded by calatheas, succulents, philodendrons, and cacti, to name a few.

Our little cafe has become somewhat of a jungle during lockdown. We are still serving great coffee and croissants and will be introducing more food to the menu in the coming days and weeks. We’re adding a menu to Deliveroo as well as wine later in July (take away only). More adaptations will come as we navigate the distancing and cafe setup over the summer with plans for a change to our seating both inside and out. We’re open Tuesdays to Saturdays for now, and looking at reopening 7 days from early July.

Many of these locals talk to them about veganism; it’s a lifestyle increasingly being adopted by Kentish Towners (and Britons, in general).

The Fields Beneath is one of London’s few fully plant-based cafes. The store went vegan on Mother’s Day 2017, a year after Fernback and his wife Caz did. The story goes: they “ran out of ham” for a while, before being upfront about the change and shunning cow’s milk from their menu and site. But it’s very normal now.

“There are very few things in the cafe that would give away that we’re vegan,” says Fernback. And he’s right. The store has subtle pictures and a tiny sign behind the bar that reads: House milk is oat. “If someone asks for a latte, I make them a latte with oat. I don’t say: ‘By the way, this is going to be oat milk.’” 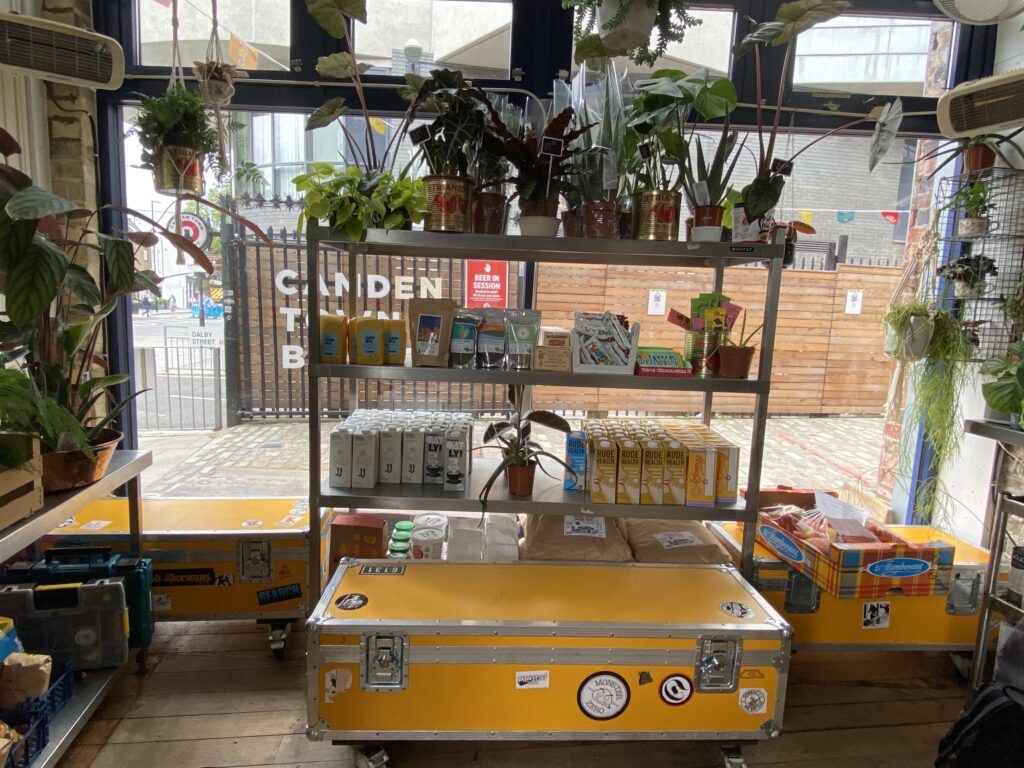 Despite being a completely vegan cafe, The Fields Beneath still ranks among London’s top 40 coffee shops. It’s a sweet spot to be in for a place that began as a coffee cart on Bridge Approach near Primrose Hill in 2011. It was called The Sandwich and the Spoon, and ran for six months. But then, after his landlady increased his rent to push him out, so her daughter could move in, he found this site in Kentish Town and opened The Fields Beneath in 2012 with a customer from his old stall.

“That was good until it wasn’t good, and we split after a year-and-a-half,” recalls Fernback. But he slowly built the place up, and now it stands amongst London’s best. He briefly opened another site in Camden Town last year. But the space wasn’t working out, and shut soon after. “I don’t think I’m a multi-site person,” he reflects.

For a long time, The Fields Beneath’s bestselling food items were ham and cheese croissants and toasties, two products Fernback didn’t think were possible to lose. But after going vegan, he realised he couldn’t hold out for too long.

Fernback and his wife started their journey towards veganism after reading Eating Animals by Jonathan Safran Foer. “That shocked us, and we spent a year still eating animals but trying to justify it, asking farmers about origin and all that shit,” says Fernback. And it went like that for a while, before they watched Erin Janus’s viral YouTube video, Dairy is Scary. That took them over the edge, and they went plant-based.

While they started getting into vegan activism and going to events, the cafe was still serving meat. But after a slaughterhouse visit in August 2016, he remembers making lunch at the cafe one Saturday. When he was putting slices of ham onto the bread, he kept thinking: This is one of my cats. This is one of my other cats. “I was like: ‘I can’t fucking do this anymore. This is when we’re going to start transitioning to a fully vegan menu.’”

The team decided to take two major steps to encourage the switch. First, the chef at the time, Av Padda, came up with plant-based alternatives to the old bestsellers. Second, the cafe did a 30-for-30 campaign. The premise: pay £30 upfront, and you get 30 coffees on your name within the next three months. The catch: it had to be plant-based milk. “It really worked,” says Fernback. “They were £1 coffees with oat milk, so you’re getting 60% off your coffee for the next three months.”

Did the cafe lose any regulars? “Yeah. Some. But people loved what we were doing.” He explains that people don’t go too far for coffee in the area. “And plant-based milk tastes good, just different,” he notes. “People just had to adjust their taste buds. I told people: ‘If you want to commit to trying it, I promise you it’s good. But it’s different.’ And it works.”

What fascinates me is, unlike most cafes, The Fields Beneath has multiple alt-milk brands. The shelves are lined with Rude Health, Bonsoy, Oatly and Minor Figures. I ask him about the idea behind that. “Whatever seems best [to customers],” he tells me. “And they’re all tetra packs, so there’s no shelf life-risk.”

Having dairy alternatives as the default means increased milk costs. “But we’ve subsidised our prices. We also buy pallets of oat milk, which not many cafes could do,” explains Fernback. The cafe does have extra costs that don’t make it particularly profitable, but that’s one of the challenges of operating a fully vegan cafe. “But I’m okay with that,” he says, “because I wouldn’t go back to dairy.” 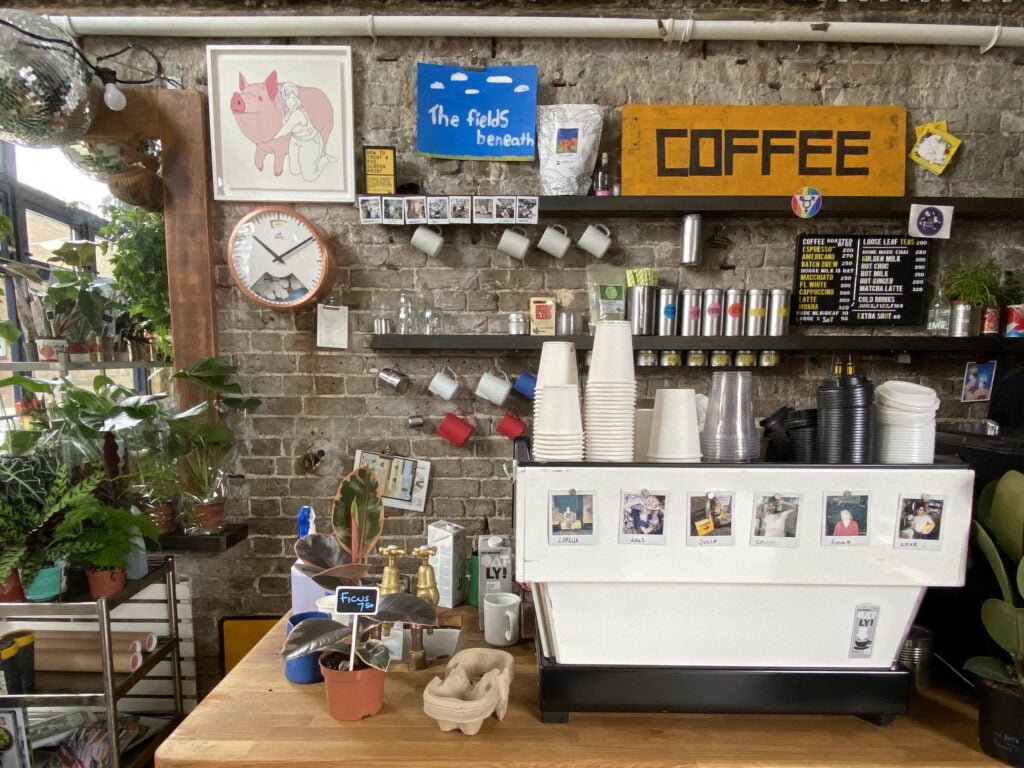 Is there potential for other cafes to go completely plant-based as well? “It’s possible, but it’s hard. You go to any normal cafe, and they’ve all got delicious but fucking easy food to make,” he says. “I’m jealous because they need no chef input at all, whereas for us to make food, we need someone with very good, specific skills.”

Looking ahead, he also predicts more competition in the oat milk market. “If a company’s worth $2 billion, other people with loads of money will also want to make some money out of this industry,” he explains. “Plant milks are going to grow from that, and prices will also drop. Tesco’s Finest will do oat milk. As a result, it’ll be more accessible to more people.

“There are also people who may also never care about animals, but they also care about business, and if there’s oat milk that sells better, they’ll move to veganism for economic reasons,” Fernback notes, before adding: “But it’s also going to take a while for veganism to get there.”

Anay Mridul
Anay is journalism graduate from City, University of London, he was a barista for three years, and never shuts up about coffee. He's passionate about coffee, plant-based milk, cooking, eating, veganism, writing about all that, profiling people, and the Oxford Comma. Originally from India, he went vegan in 2020, after attempting (and failing) Veganuary. He believes being environmentally conscious is a basic responsibility, and veganism is the best thing you can do to battle climate change. He gets lost at Whole Foods sometimes.
Previous articleAldi wins PETA’s Top Grocer Award for its vegan food offerings
Next articleNestlé to launch vegan condensed milk