From the power of plant-based cheese, to how Gen-Z plans to rule the world, Olivia Fox Cabane recounts her journey with the KindEarth.Tech maps.

Protein Map 3.0 is finally out, and KindEarth.Tech (KET) co-founder Olivia Fox Cabane sounds both exhilarated and exhausted about it. For almost three years, the entrepreneur’s life has mostly been dedicated to mapping out the food tech industry, and she’s ready to take a step back.

With volunteers spanning across the world, the process behind every map is simple. All they do is scout the Internet for missing companies, get a logo, basic information, and then upload everything directly to a live map and a folder containing the static maps. “Literally all you need to be a part of this is an internet connection,” says Cabane.

While the maps are mainly based in the US and the EU — where Cabane has grown up and lived her whole life — KET aims to eventually have one map per country, and so is on the lookout for volunteers. Cabane and her volunteers welcome all start-ups, especially as more and more investors are turning to the maps as a source of validation.

The first map, Protein 1.0, was a draft published on her LinkedIn page in January 2018, done off the backend of a friend’s suggestion. “He suggested I make a map to get to know the industry, and that’s how the first one came out.”

The post got 7,000 views. “To my complete shock,” she exclaims. While many people have commented on her courage to post something that was such a draft on a professional profile, the businesswoman knows she wouldn’t be where she is today without Protein 1.0. Between January 2018 and January 2019, Cabane was producing a new map every month. She says things are slowing down, but taking it to a global level has added new pressures.

While the maps are designed for corporations and consumers alike, the protein map is definitely the trickiest of them to understand. The protein sector is expanding much faster than any other sector, and this is making it increasingly more difficult for the information to be digested.

Apart from protein, the other map Cabane wants to see blasted across all corners of the Internet is plant-based cheese. The US, she notes, is in particular need of this. While the country is ahead in its cell-based technology and its protein alternatives, she explains vegan cheese still tastes like cardboard there. “I have no bloody clue how you got there, but I’m French and I know British plant-based cheese is getting pretty damn close to rivalling traditional cheese,” she laughs. 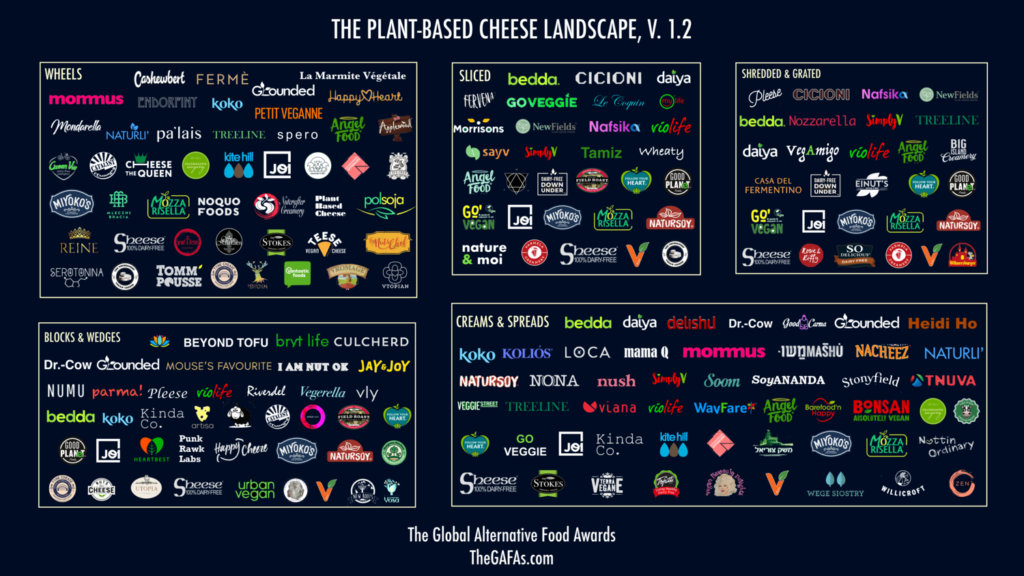 Every person in her circle who has hit a roadblock to veganism will blame it on their love for cheese. But whenever Cabane has sent the cheese map to retailer CEOs, she says it blows their mind. “People don’t know what the landscape is like, and they really need to.”

With sales growing by 500% year-on-year, the businesswoman says no other area is seeing levels like this. But she says there is still a lot of white space for entrepreneurs to explore. “I don’t want start-up founders to create another vegan meatball. For heaven’s sake, stop creating burgers. Meatballs and burgers are the shiny objects of the industry, but they aren’t where the need is. The need is in the ingredient space and the blended product space.”

I can hear the passion in her voice as she suddenly starts raving about fungi. One area she says needs a “kick up the butt” is this one: “It’s an entire kingdom of which we’ve barely scratched the surface.”

The single most renewable resource on the planet, most of the landmass we currently stand on is made of bacteria — and someday she says we’ll be building our homes from fungi. “If I can parachute cheese maps and Fantastic Fungi into every investor’s head on the planet, I can die. I’ve done enough,” she says, smiling.

But it’s only the beginning of this food tech evolution. “You’ve seen that map of the food world, right?” she asks me. “The map that shows us that eight companies own most of the industry.” She goes on to explain that fundamental companies like Nestle, Danone, and PepsiCo, are all laser-focused on the plant-based sector.

She adds that Gen-Z makes up 40% of the world’s population right now, and with their increasing tendency towards veganism, the industry has no choice but to deliver.

“It’s the single most powerful, inter-connected, well-educated, rich and, in many ways, independent-in-their-choices-generation we’ve ever had,” she says. Transparency, followed by authenticity, are its number one values. So it’s not just about following Gen-Z’s demands, but it’s upholding them from the very beginning. “If you want to sell to Gen-Z, your history has better involve itself with socially responsible products now.”

I ask her if this comes from a place of social pressure, or avoiding shame, but she says it’s purely for financial gain. If smart money wants to get ahead of the game, they need to start implementing these values. “Gen-Z is going to have control of the purse strings. They are going to control even more money every single year.”

Olivia Rafferty
Olivia is the Assistant Editor of The Vegan Review. An aspiring Middle Eastern correspondent currently studying journalism at City, University of London, she is passionate about the planet, she believes veganism is the first step to solving the complexities of climate change.
Previous articleThe Covid-19 vaccine: Vegan-friendly or not?
Next articleIs Coca-Cola vegan or is the ‘Real Thing’ laden with animal products?