The ultimate guide to plant-based meat 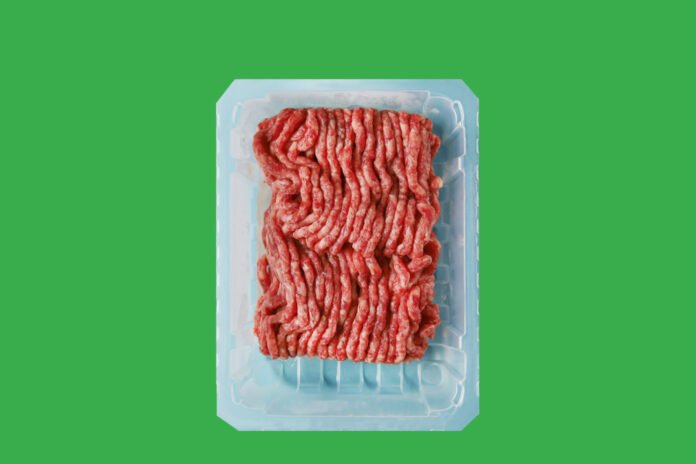 While some find giving up meat impossible while transitioning to veganism, meat alternatives are on the rise. Here is our ultimate guide to plant-based meat.

Though plant-based meat alternatives are often made from vegetables, lentils and beans, they do not provide the same texture or taste like meat. And therefore, there has been a long-held demand for plant-based meat. The Good Food Institute and the Plant-Based Foods Association revealed that the growth rate of alternative meat sales is much quicker than regular meat.

There are now multiple varieties of plant-based meat products, which can be found in many supermarkets. These faux meats mimic features of animal-based meat. Greg Xavier, a plant-based nutritionist and chef, expresses that “there has never been a better time to easily find or create a replacement” for meat-based meals.

For example, these vegan meats now mimic the smell, taste and texture but without the animal-derived ingredients, whether it is sausages, chicken, bacon or steak. Instead, some common ingredients found in vegan meats are soy, coconut oil, wheat protein and vegetable proteins.

The fact that vegan meat mimics the taste and texture of animal-derived meat is seen as an issue by some; the principle of veganism is to avoid meat, animal products and follow a cruelty-free life. Therefore, some can view vegan meat as problematic due to their moral contradictions. “Approaching this from an ethical point of view, it does seem odd to be strongly against consuming animal meat, yet seek out something that has the exact texture and flavour to eat,” says Xavier.

On the other hand, these vegan meats can serve some important uses for those transitioning into a vegan diet. Xavier says: “Vegan meat alternatives are what I would call a ‘transitional product’. It looks and tastes exactly like what they are used to, and so, trying it is not a huge leap for them mentally. I have had plenty of omnivorous friends try the Beyond Burger or a meat-free mince, who previously told me they could never eat how I eat. I do view that as a small step in the right direction.”

Plant-based meats can serve as a great purpose for those who are not following a cruelty-free diet completely — it is a great tool for meat-eaters and new vegans to have a smoother transition into a fully vegan diet, as they can enjoy meat-like food without contributing to animal harm in the process.

Another issue brought up with meat alternatives is the health aspect, as being plant-based does not necessarily mean healthy. Though there are some concerns that vegan meat is unhealthy due to its high sodium content, it is often still considerably healthier than animal-based meat. 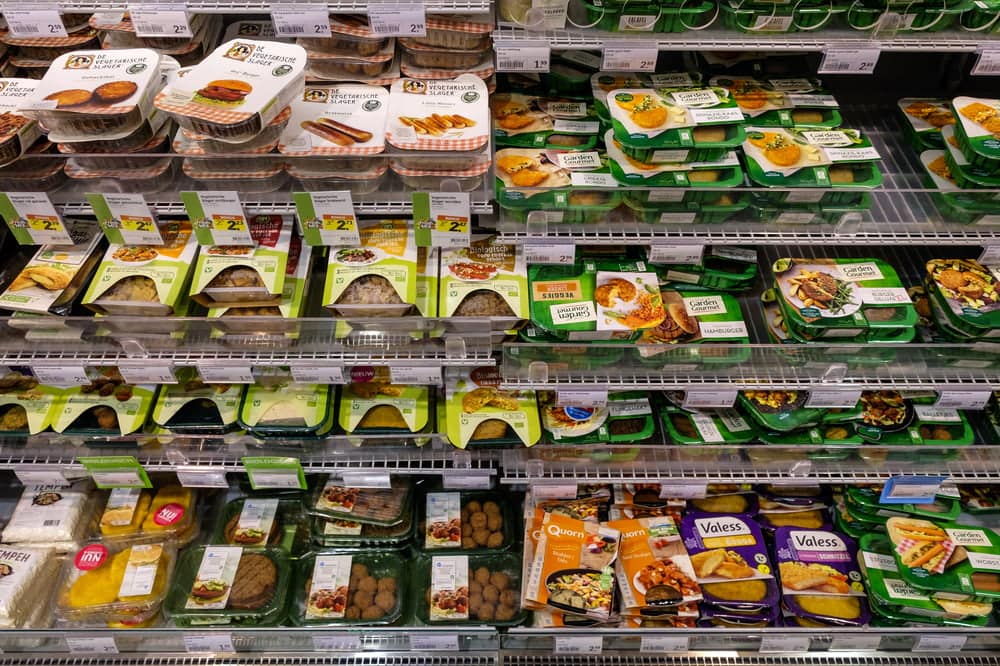 In an interview with Metro, nutritionist Geeta Sidhu-Robb outlines that “in the balance of things, alternatives are actually healthier than processed meat — it just depends which substitute you opt for.” So, even when a label reads vegan, it’s important to dig deeper into the ingredients if you are conscious about health.

In comparison, steak made from regular meat brings a lot of concerns; it is high in saturated fats, cholesterol, can clog arteries and lead to health complications. Donald Hensrud, director of Mayo Clinic’s Healthy Living Programme, says: “The bottom line is: the health risks of consuming red and processed meat outweigh any benefits.”

Speaking to Plant Based News PBN, Vivera’s Gert Jan Gombert, said: “It is very important that we eat less meat, both for our own health, animal welfare and for our planet. Innovative and high-quality plant-based products can make a significant contribution here.”

Though these vegan meats are advised to be consumed in moderation, they are a great way to satisfy both meat lovers and vegans, whilst also being sustainable and offering a range of flavours. 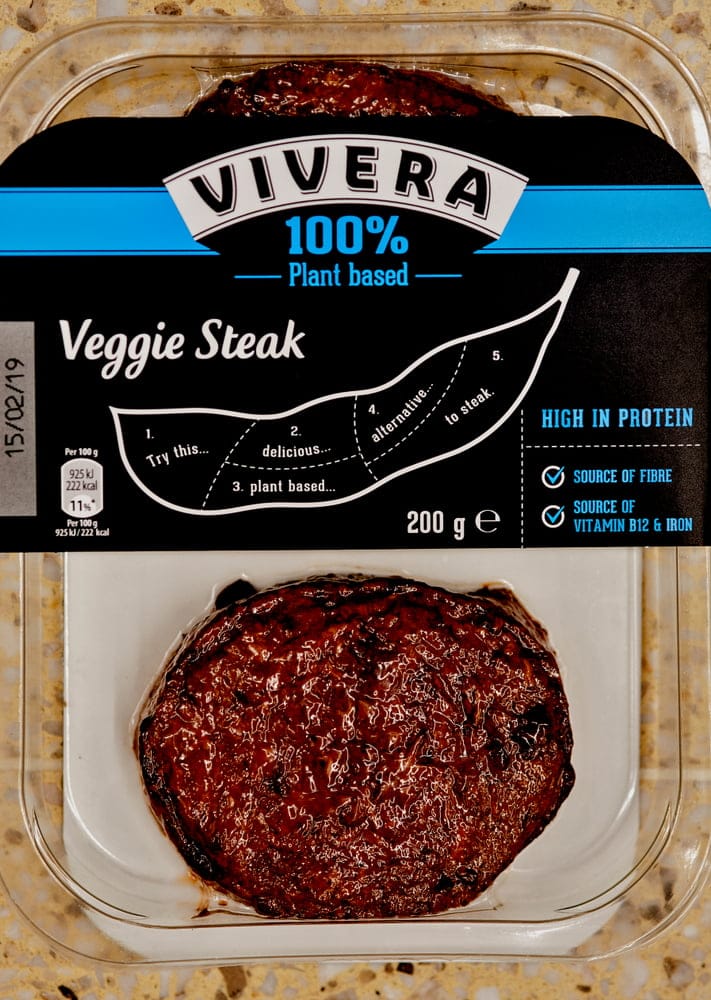 Vegan steak was not in the supermarket scene until 2018, when plant-brand Vivera introduced its 100% plant-based steak. It’s high in protein and a good source of vitamin B12 and iron. With new technologies, this vegan steak attempts to provide a similar, if not identical, texture and taste to regular steak.

The brand has even published a recipe on its website to guide consumers who want to cook vegan steak. In terms of its characteristics, Gombert told PBN: “The smell, taste and bite can hardly be distinguished from real steak.” 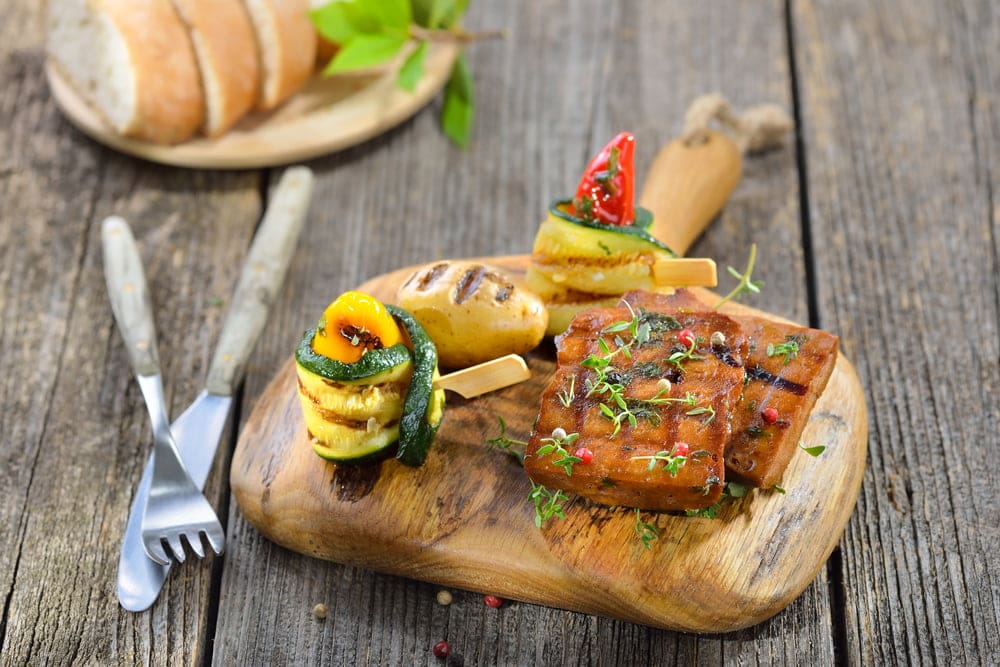 A popular way to make vegan steak is using seitan. Seitan is derived from gluten and on its own, is pretty dense and flavourless, and therefore should be marinated before using. Due to its high level of protein and low carbohydrates, seitan is a good plant-based replacement for “real” meat for those conscious about health. It also contains very little fat, since wheat grains are nearly fat-free.

However, it is not suitable you are following a gluten-free diet; you may want to opt for ready-made vegan steak in stores. Though usually difficult to get a hold of, seitan can be found in health food stores such as Holland & Barrett in the UK. 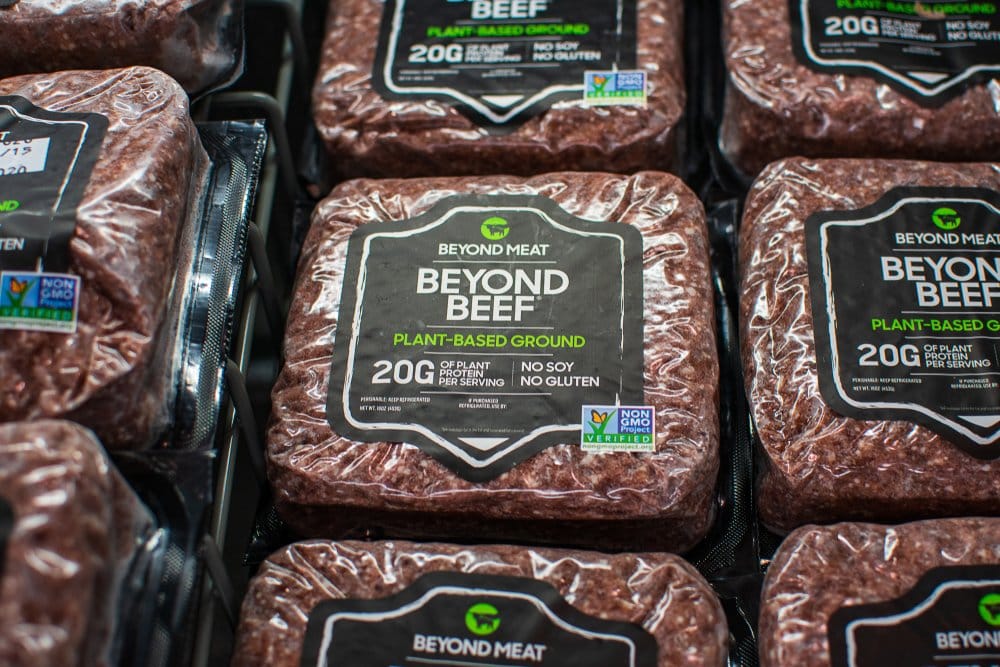 Beyond Meat provides a range of plant-based meat products, including mince, burgers and sausages. They are gluten-, soy- and GMO-free. The ingredients include pea protein, coconut oil, rice protein and other natural flavours like beet juice extract for colour.

Additionally, Beyond Meat not limited to just steak. It also offers vegan alternatives for sausages in both spicy and classic flavours as well as beef crumbles, which can be used like mincemeat.

Xavier outlines that “mass-produced vegan or plant-based meat tends to be heavily processed. And therefore low in nutrition”, adding that “the closer a food is to its natural state, the higher its nutrient content”. Therefore, for regular meat cravings, it may be best to opt for healthier ingredients. That used to make vegan steak at home.

One of the easiest ways to recreate a vegan steak is through mushrooms. In just 15 minutes, you can bring those steakhouse flavours home. All you need to do is marinate a few simple ingredients and use a griddle pan.

Though these can be fun to try and can taste delicious, Xavier notes that “one must expand their definition of the word ‘steak’ in each case”, due to the difference in texture, appearance and taste compared to animal-based steak.

For those who are solely looking for an alternative to bacon, Vivera provides vegan bacon pieces made from rehydrated soy protein. These are widely available in grocery stores across the UK. The Plant Bacon Pieces are very convenient, as they take only a few minutes to cook in oil. As for the nutritional aspect, this product is high in protein and a source of vitamin B12 and iron.

But Xavier says: “While the processed versions are a novelty and a simple swap for those new to the meat-free life, I would always advocate the plant-based approach for long term health.” Therefore, the healthiest way to utilise such products is consuming them in moderation.

Though it may seem odd at first, carrot bacon has gained traction on TikTok. Popularised by vegan TikToker Tabitha Brown, she says this vegan alternative can provide the same crispy texture of meat-based bacon. This is a creative way to use vegetables and can be made in just under 30 minutes using ingredients like maple syrup, tahini and soy sauce.

Apart from being quick, it is a much healthier alternative. As it is vegetable-based rather than processed. Xavier recommends that “whole plants should make up roughly 90% of what you eat, with processed foods eaten two to three times a week at a maximum”.

Instead of buying processed store versions of vegan bacon, Xavier says vegan bacon can “easily be recreated at home with eggplant”. Using eggplant as a meat alternative provides the savoury, sweet flavour of bacon as well as its crispy texture, bringing you very close to regular bacon.

It is one of the best alternatives for those who are conscious of their health, as eggplant has many benefits, including improving digestion and being a great source of vitamins. 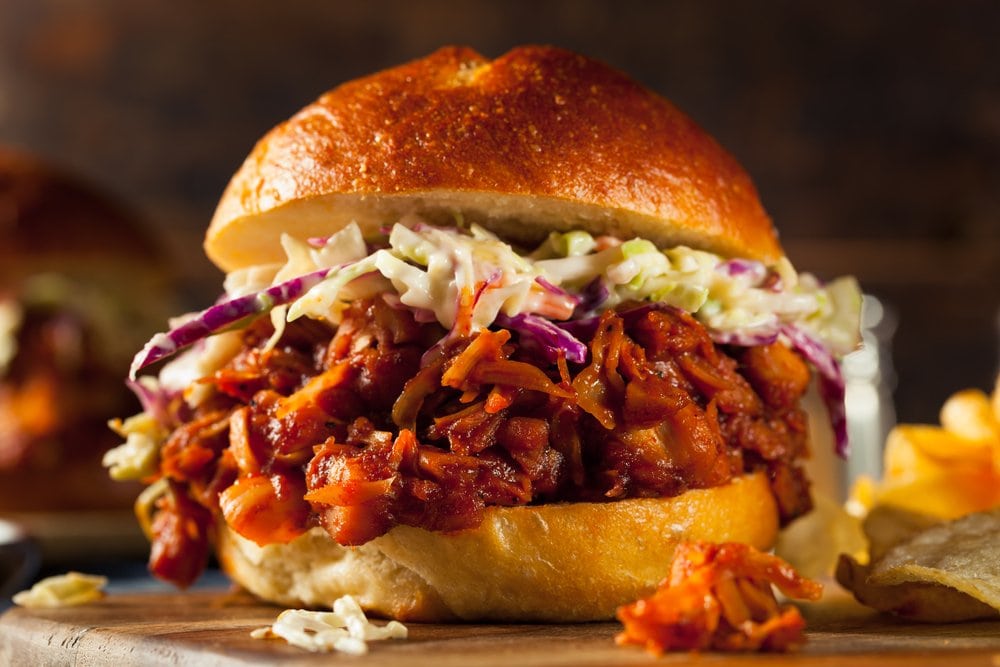 Jackfruits are a great replacement for pork, as they mimic the texture very well. Jackfruit shredded just like pork. And with its ability to take on seasonings, it can make a very convincing substitute. It often used to make vegan pulled pork sandwiches.

However, it is a very weak source of protein and not nutritionally equivalent to plant-based bacon.

Check out our blog for the best sources of protein for vegans.

Quorn is well known for its meat alternatives, and for those who want a store-bought product, the brand offers a great range of vegan meat, ranging from chicken and mince to fish and ham, while also being very close in both taste and texture to animal-based meat.

Though this is a processed product, Quorn provides some recipes that demonstrate how to utilise its products in healthy meals and therefore, for those who are health conscious but also short on time, this brand is perhaps a viable option to satisfy your needs.

Although tofu is nearly flavourless in its original state, that makes it the perfect base to absorb any spices. And sauces you add to it, making it a versatile ingredient. You can bake, fry, boil and even braise tofu, depending on your dish. If you crumble it, you can achieve a meat mince texture, and when cut up, it can closely mimic chicken.

When buying tofu, it is worth looking out for certain brands that often add nutrients like calcium and B12 to their tofu, as these meet your nutritional needs as well as your plant-based meat cravings. 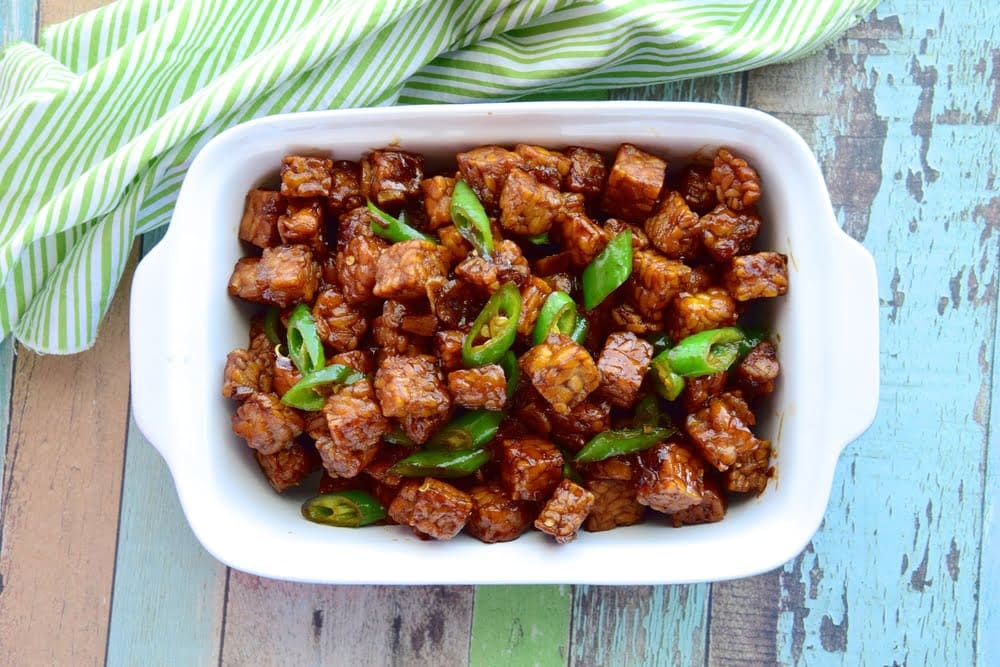 In comparison to tofu, tempeh is firmer in texture and provides more of its own flavour. Xavier says: “I have used tempeh as an alternative in certain recipes as it is minimally processed. And has a better flavour and texture than tofu.”

In terms of health, tempeh provides more protein, vitamins and fibre than tofu whilst bringing the same versatility. It cooked to make its texture more meat-like or mimic chicken directly. For example, tempeh makes for great vegan chicken nuggets and tenders.

For more chicken alternatives like vegan wings, cauliflower is a great ingredient. Xavier states: “If done right, they are a great replacement to chicken wings and would surprise the average meat-eater.”

To create cauliflower wings, a minimal number of ingredients needed: cauliflower, oil, breadcrumbs and flavourings of your choice. A popular choice is buffalo-flavoured cauliflower wings. Apart from being delicious, they provide bigger portion sizes than chicken wings as well.

Therefore, though these vegan meats advised consuming in moderation. They are a great way to satisfy both meat lovers. And vegans whilst also being sustainable and offering a range of flavours, aside from just vegetables.