The Ultimate Guide to vegan food in Malaga

Although the Mediterranean diet is still catching up on its vegan side with the general public, there are many places to enjoy a vibrant traditional plant-based meal. Here is our Ultimate Guide to vegan Malaga.

There are many reasons to switch to a vegan diet. According to The Vegan Society, during the lockdown, one in five Britons have cut down their meat consumption and 15% have reduced their consumption of dairy and eggs.

Michelle Mack, founder of Vegan Life in Spain thinks that besides the salmorejo, gazpacho (cold tomato soups) or pisto (vegetables sautéed with tomatoes), Andalusia still has a long way to go with veganism: “The cities here are leading the way but the smaller areas are still very much lagging behind.

“Through the influence of expats and tourists, more people are becoming aware of what vegans are and vegan food in general. In places like Marbella, Fuengirola, Malaga and the other bigger cities, there is definitely higher awareness and empathy, with many options to eat,” says Mack.

Nonetheless, businesses are pushing to an alternative diet. In big supermarkets, you can now find many meat alternatives that non-vegan people are curious to try. Mack hopes it’s an unstoppable growth and that Malaga will be a vegan-friendly city like Brighton or London soon.
Here’s our Ultimate Guide to vegan food in Malaga.

El Vegetariano de la Alcazabilla was the very first vegetarian restaurant in the city. The owner, Angélica Fontana, tells The Vegan Review: “We started 25 years ago in Fuengirola, then we moved to Malaga city, to the same place where we are now.” This is beside the Roman Theatre and below the Muslim palace, La Alcazaba.

“In 1995, there were several vegetarian restaurants; all of those with a similar menu. We tried to copy traditional Andalusian recipes to catch the Spaniards who are carnivore with vegan burgers,” says Fontana.

They have been shifting from vegetarian to vegan recipes, such as seitan burgers or quinoa balls. Although those are not on the menu yet due to the delay caused by the coronavirus, Fontana says she has tested it in other dishes with great acceptance.

When asked about her signature dish, she firmly advises Mixto Vegano: “It’s a very varied dish that accomplishes the three keys in a balanced dish; carbohydrates, proteins and fibre.” Fontana has academic training in food, and she focuses on her dishes’ nutritional value.

On the dessert side, she mentions three cakes: ginger and apple, banana and apple, and the bestseller, carrot cake.

A standard meal for two people, with two courses, a dessert and a drink would cost around €30. In addition, the restaurant has its plate of the day is priced at €6.5.

Cañadú is in the heart of Malaga, at Merced Square, beside Pablo Picasso’s home. Francisco Javier Urbano started the business in 1998 as one of the first vegetarian restaurants in Malaga. He has been vegetarian for over 30 years, and his parents pioneered the diet in the city with the Vegetarian Club in 1968.

Along the years, they have changed the menu, and at the moment they are working with the dishes guests love the most. A safe bet in Cañadú is the aubergine stuffed with mushroom and nuts and grilled with vegan (or regular) cheese, served with whole rice. It is low cooked for two hours and it gets a juicy texture.

Another good option is the Persian-style rice, with mushrooms, almonds, risings and spices. It is based on a recipe from the Middle East, which is in line with the history of Muslim rule in southern Spain.

Also, a Spanish table can not miss a good wine. Cañadú has an organic wine list. Urbano recommends one from Alpujarra, an Andalusian mountain region. “It is produced at 2,000 meters with no additives or sulfite. So, it’s a clean wine that doesn’t give a headache afterwards.”

At midday, it also offers a menu with starters, two courses and a dessert for €11.
Urbano has seen several vegetarian waves. “At the moment there is a boom,” he says. “I don’t think it’s just a trend. At some point, everybody will understand that human beings should not kill to eat.”

Although most of the plates are vegan by default, Cañadú offers also diary options with regular cheese.

Tapas are the most traditional type of dish in Spain. There are many kinds of tapas, and La Vegana Taperia has moved this concept to its 100% vegan kitchen.

Yanira Fernandez opened this vegan restaurant in Malaga just two weeks before lockdown. “Our idea was adapting the Mediterranean diet to veganism,” she says. “When we went out, we couldn’t find anywhere to eat tapas. We think we [vegans] can eat everything and be healthy.”

The signature dishes are the pil-pil vegan prawns and garlic vegan cuttlefish. The vegan versions are based in soy and vegetables. “We have not changed the name of the classic Malaga plates to show to omnivore people that they can eat the same plates without animal cruelty.”

Fernandez says many non-vegan people go to La Vegana Taperia. There are sceptics sometimes, but “most non-vegan guests are happy when they finish. Now some of them come back on a weekly basis.”

It may be a result of the prices too, which vary according to the portion size of the tapas. On Sundays, it offers a tapa and a drink for €3.

This place is in the refurbished Soho neighbourhood. MIMO Vegan Bistro is a small family business that believes in the benefits of the plant-based diet. In fact, all its products are organic and grown locally.

The Nieszczerzewicz family, originally from Poland, started the restaurant a year ago. Like many others, the lack of good-quality plant-based food in Malaga drove them to open a vegan restaurant in Malaga. “We consider all our dishes like our babies, because we put a lot of effort in all of them,” says Bartek Karwowski, the son-in-law in the family.

For them, the raw material for the food should be excellent, and they only have seasonal products. The family changes the menu every two to three months. “We explore different flavours and structures. We try to surprise our guests with our creativity,” says Karwowski.

Among MIMO’s notable highlights are vegan burgers and the Onigirazu Sandwich, which is made with chickpea tempeh.

They also have desserts like lemon tart with almond ice cream and chocolate mousse with seasonal fruit. Karwowski proudly says the desserts, besides being vegan, have no added sugar, “only natural sweeteners”.

On average, the price for a two-person meal would be around €25.

Some restaurants use fixed menus to attract customers, but MIMO doesn’t need that. Karwowski reckons veganism is on the rise: “We try to convince people to try the vegan diet without pushing them. It’s very important everybody does it in their own way”.

A post shared by La Sociedad Herbívora (@lasociedadherbivora) on Jun 6, 2020 at 5:55am PDT

La Sociedad Herbivora, or ‘the herbivore society’, opened in December 2018. It’s a fashionable vegan restaurant in the Malaga city centre. Its owner, Sergio Sigalat, tells The Vegan Review: “I’ve been vegetarian for nine years, and vegan for three. I have always been in the hospitality business and I wanted to start a new project. I did something that was in tune with myself.”

Veganism is a steady tendency and everyone may have their own reasons, environmentalist, healthy, etc, and Sergio thinks that he has many different guests.

“However, the most pleasant are elderly people who are not used to it (veganism) and they finish satisfied”.

People have different reasons for going vegan — the environment, health, animals, and so on — so Sigalat gets to host a variety of guests. “However, the most pleasant are elderly people, who are not used to veganism, and they finish satisfied.”

Regarding his 100% vegan kitchen, he highlights the homemade seitan fillet with three-peppercorn sauce and the parmigiana.

The parmigiana “is a sort of lasagne, with roasted aubergines and courgettes, a homemade tomato sauce, spinach and arugula pesto, and oat bechamel.”

His chefs are constantly looking for new recipes. They change the suggestion menu every fortnight, and if people like the dishes, they put them on the regular menu. “We tried a vegan foie gras, and people liked it a lot. We served it as a timbale with seeds and rye toast, which has a very similar texture than the original recipe. Our foie gras has mushrooms, onions, nuts and lentils; the guests can’t guess or tell the difference.”

On the confectionery side, La Sociedad Herbívora makes three delicious cakes: lemon tart with a nut base, pumpkin cake covered with chocolate and a traditional, but vegan, brownie.

Overall, a regular meal for two people would cost around €30 to €35. 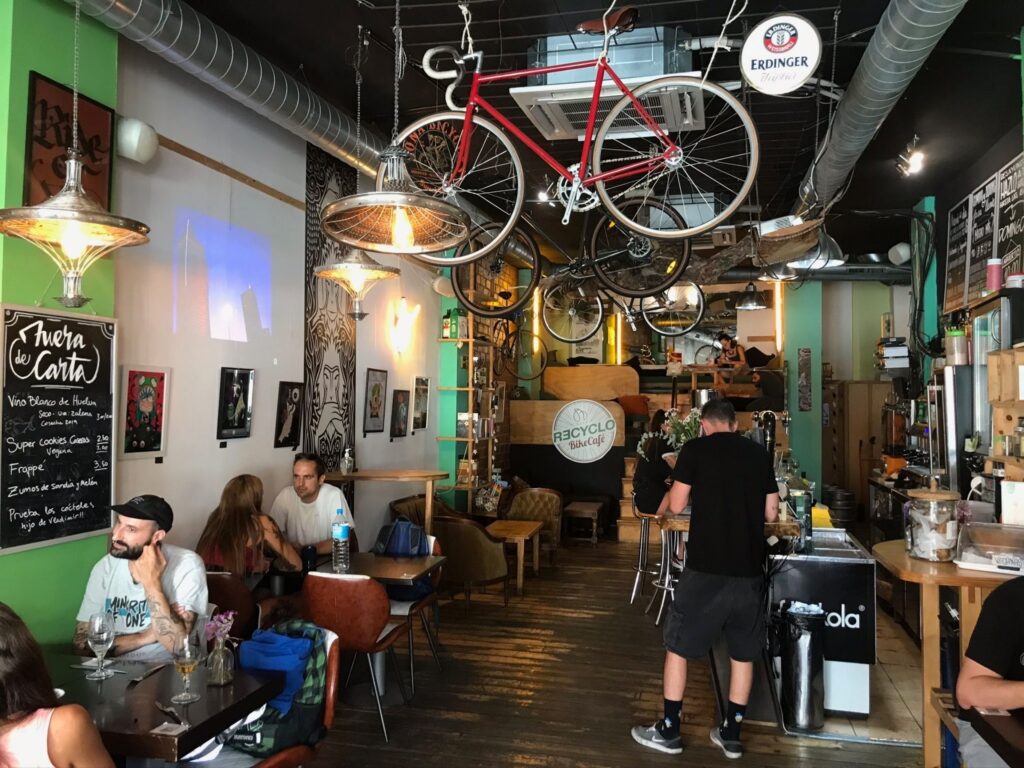 Recyclo Bike is a cafe attached to a bike shop, where you can rent a bike to get to know the city over two wheels. It serves meat, but nonetheless is a favourite among young vegetarians in Malaga.

Its owner, Patrick Peckham, has been pushing to change the menu toward veganism: “I’ve always been surrounded by vegetarianism and for me, the kitchen is mainly vegetarian, with the meat like something to add from time to time”.

“Since we opened, we have been cutting off some meat plates. For instance, we have tried to eliminate beef, which is the most expensive and the one with the greatest environmental impact.”

At the moment, about half of the menu is vegetarian. Recylo prides itself on its vegan tacos, made with legumes, soya, wok veggies, guacamole and sugarcane honey.

They have several styles of burger, all of which can be made vegetarian or vegan. But the signature might be the Ramen Burger, which replaced regular bread with ramen noodles. It also has avocado, arugula, fried egg, cheese, chives and hoisin sauce.

They have many other dishes, like guacamole, spinach croquette, cottage cheese and spinach pie, and falafel pita.

It also has a set menu of the day that costs just €6, featuring two courses, a piece of fruit and homemade lemonade. It also changes daily.

Apart from that, Recyclo also serves breakfast and natural juices. Its ingredients are very fresh, from the Atarazanas Market down the road. It’s a very popular market, where local people gather to sell their products. It also helps restaurants like Recyclo keep prices low.

Juanele Villanueva
Juanele Villanueva is a freelance journalist passionated with Environment Affairs. He is originally from Spain and started to be interested in the Environment and sustainability when he was in his masters at the University of Salford. His goal is to share stories which change the general belief that being eco-friendly is just for wealthy people. Moreover, the vegan diet is the easiest step that everyone can do to reduce its environmental footprint. He is also interested in conservationism, recycling, renewable energies and environmental policies