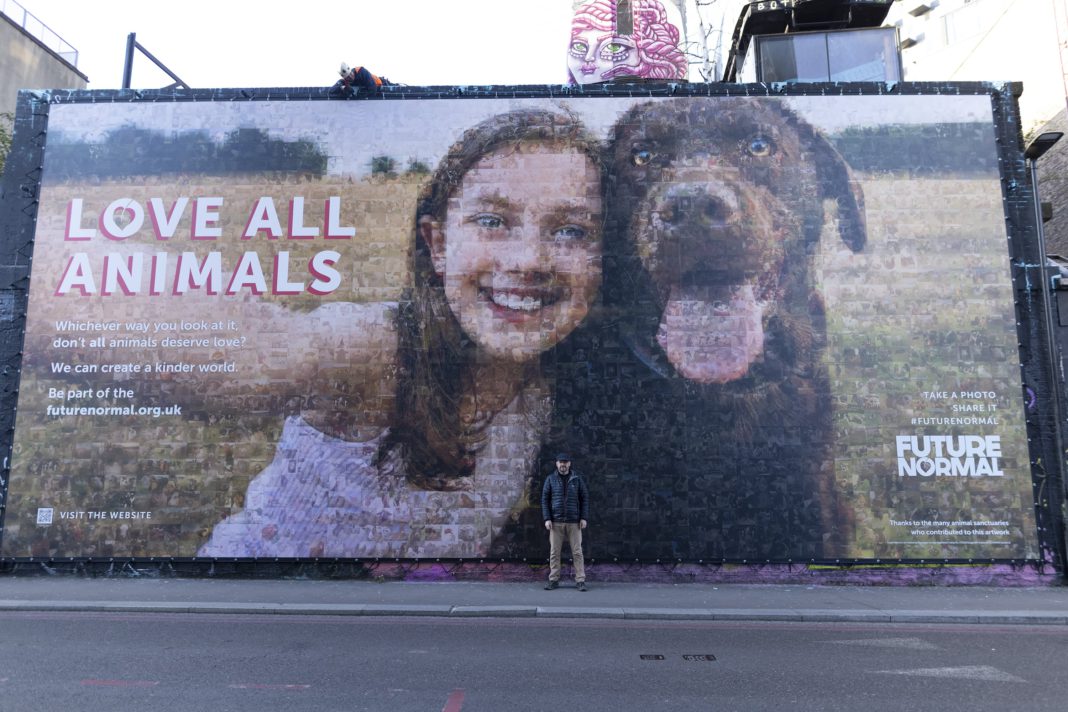 As part of its Future Normal campaign, The Vegan Society has unveiled a huge animal-filled mosaic in Shoreditch today.

The Vegan Society has taken over an entire 47-by-23 ft wall in Shoreditch to unveil a huge one-of-a-kind mosaic.

Installed on Holywell Lane, the mosaic is part of the charity’s Future Normal campaign, its biggest to date. It attempts to get people to reflect on their attitudes towards animals and consider going vegan.

The campaign seeks to create a kinder future for animals. At large, the image on the billboard is of a dog and its carer, a young girl. But on closer inspection, the mosaic is made up 1,000 small photographs of rehomed, rescued farmed and sanctuary animals. The Vegan Society says two of the images belong to the “most iconic faces on the planet”, encouraging people to take selfies with the celebrities if they can spot them.

It was created and installed by Horizon Outdoor, and is the first commercial display in the UK to use Kavalan PVC-free vinyl, a sustainable and environmentally-friendly material, which was sourced specifically for the campaign. The mosaic will be on display till May 2.

The vegan-centric mosaic in east London comes a week after The Vegan Society launched the first Future Normal Day, commemorating people who have taken the extra step to help animals with the Future Normal Hero Awards.

Mark Banahan, The Vegan Society’s campaigns manager, said: “This is an incredibly powerful image that you just can’t miss, and that’s exactly what we wanted. We know the world is getting ready to go back to normal, but we want people to reconsider what that “future normal” in a post-pandemic world looks like, particularly in relation to the way we view and treat animals.

“If we’re open to making changes in our lives, the Future Normal is a place we can create. Being vegan simply means living in line with the ethics that so many of us already hold in our hearts.”

Anay Mridul
Anay is journalism graduate from City, University of London, he was a barista for three years, and never shuts up about coffee. He's passionate about coffee, plant-based milk, cooking, eating, veganism, writing about all that, profiling people, and the Oxford Comma. Originally from India, he went vegan in 2020, after attempting (and failing) Veganuary. He believes being environmentally conscious is a basic responsibility, and veganism is the best thing you can do to battle climate change. He gets lost at Whole Foods sometimes.
Previous articleTHIS Isn’t Bacon Lardons review: upgrading carbonara for vegans
Next articleBlending alt-milks: mixing milkadamia and Sproud for the best barista milk