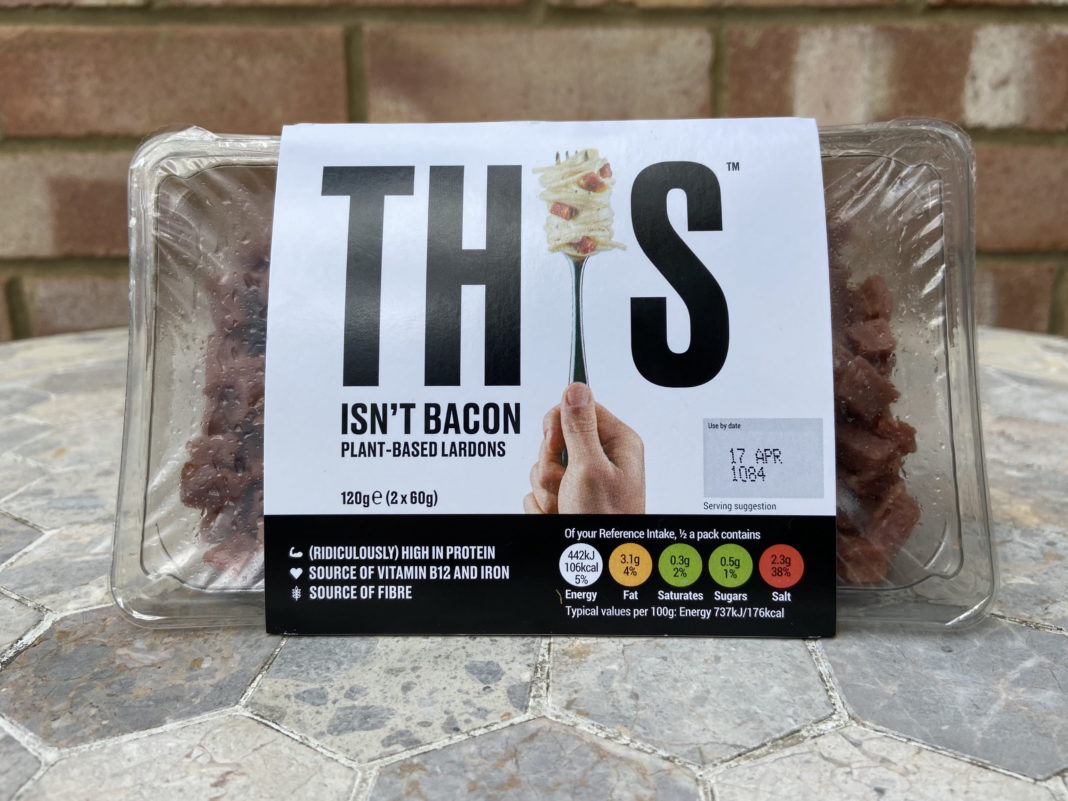 We reviewed THIS Isn’t Bacon Lardons, the plant-based meat brand’s latest release, for flavour and texture. Here’s what we thought.

THIS has become a disruptor in the true sense, taking over the UK’s plant-based meat landscape, first with its chicken, and then its bacon rashers. In 18 months of trading, the brand has racked up £13.2 million in revenue. Now, seven months after it broke a crowdfunding record on Seedrs, it’s gearing up for three more launches — vegan alternatives to pork cocktail sausages, chicken skewers and bacon lardons.

THIS Isn’t Bacon Lardons are out now. They come in a pack of two servings, 60g each. Lardons are bits of raw, salt-cured pork belly that have been cold-smoked. THIS’s plant-based take on the crispy bacon bits is an attempt to take vegan carbonara — a dish that has always eluded the original’s glory — to the next level. Who needs mushrooms when you can have vegan bacon lardons?

We reviewed THIS Isn’t Bacon Lardons in a vegan carbonara, and here’s what we thought. 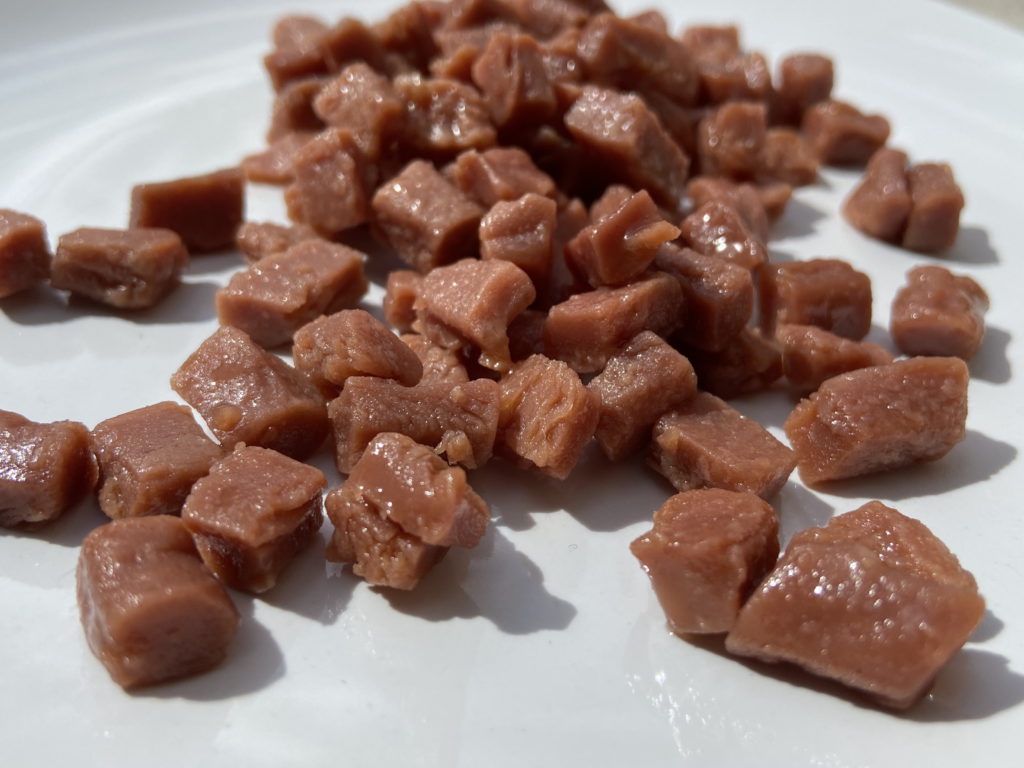 At first glance, these aren’t the multicoloured, slightly striped, elongated cuboids; they’re smaller, rough cubes. One of my Italian friends, who’s a vegetarian and used to eat meat, unlike me, says it smells like pancetta. The difference between the two is that pancetta isn’t always smoked.

To me, this smelt very smoky. These lardons are made from soy protein concentrate and isolate, with a little pea protein isolate too. Pea protein has a very strong, distinct aroma and flavour, and even in small quantities, you can get a whiff of it.

Lardons are supposed to be fatty, and these vegan alternatives replicate that really well. They’re oily on touch, so much so that the oil clings to the inside of the plastic film.

I followed the package instructions to cook the bacon, pan-frying it on a medium heat in a little oil. On tasting it plain, straight from the pan, the flavour is quite a departure from how it smelt. The smokiness is missing, and at this point, the initial aroma was better than the flavour.

But as it cooks, it tastes better. The salty and smoky notes are coming through a little, and it also starts leaching some of its fat as it crisps. Rendered vegan bacon fat, anyone? At this point, the colour resembles cooked lardons a lot more than it did before cooking.

However, the issue with this was time. The instructions said it takes five minutes to get crispy, but it took me about 12 to get it to the right level of crispy. Once it does crisp up, I removed it from the heat. And it only gets crispier as it cools.

I fried garlic in the pan, with the bacon-infused oil, heated up some carbonara sauce, and then re-added most of the cooked lardons, saving some for garnish. When the pasta was al dente, I added it in with some pasta water and let it cook through.

Read our review of TheVeganKind’s Love Plants range, which uses THIS Isn’t Chicken.

In the finished dish, it’s crispy and chewy at the same time. It still isn’t as smoky as it smelled — and that’s probably due to the application of heat during the cooking process. As a lifelong vegetarian, I’ve never eaten bacon before, but I loved this. My former meat-eating Italian friends said it didn’t taste overly meaty and fatty, which means it wasn’t a carbon copy of the original.

But that’s a good thing. It’s a plant-based alternative, after all, and it does its job. There are hints of onion and smoked paprika, but the flavour of soy and pea protein is very prominent. However, the THIS Isn’t Bacon Lardons complement a plant-based carbonara very well, both in terms of taste and texture. 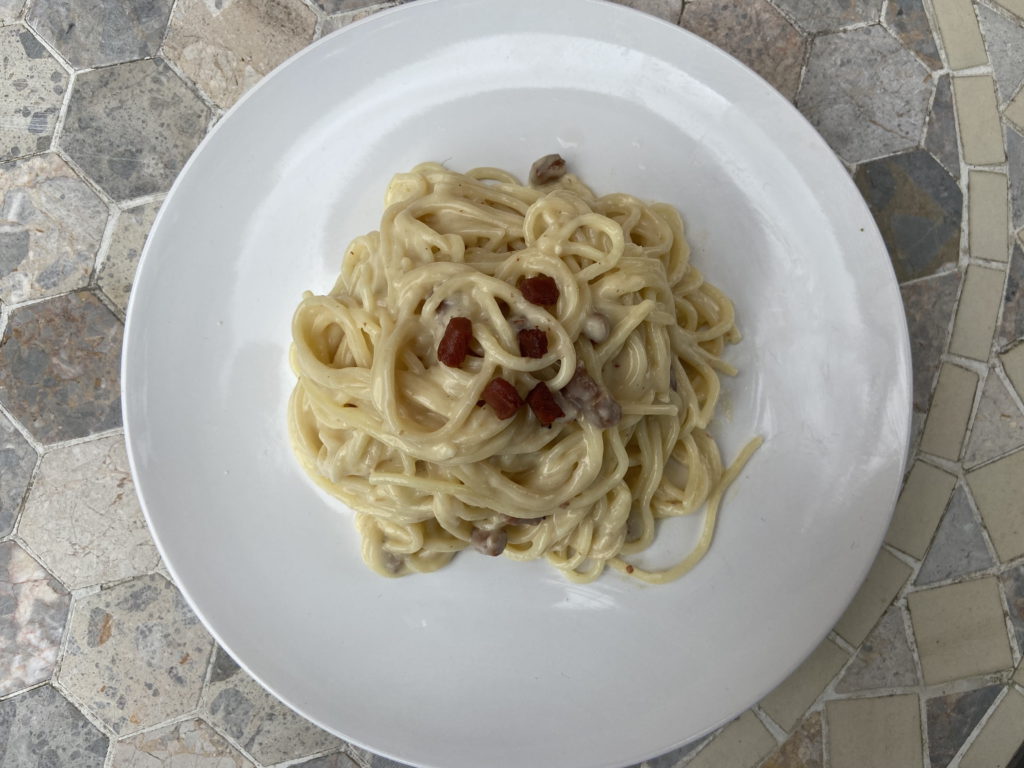 I would have loved a bit more smokiness in the finished tasting. THIS uses smoke flavouring, which is why the smokiness dissipates as it cooks. If you’ve ever cooked with liquid smoke, you’ll know that adding it nearer to the end rather than at the beginning will lend a more pronounced smoky note to the dish. I wish THIS had naturally smoked its vegan bacon lardons, but I do understand the logistical and cost issues involved there.

The other negative was the size. These lardons were a lot smaller compared to the real thing. With a long pasta shape like spaghetti, small bits aren’t the best way to go texturally. Slightly longer slabs that resemble conventional bacon lardons would have elevated this a lot further.

Either way, we highly recommend THIS Isn’t Bacon Lardons if you’re making a vegan carbonara. It might work well in, say, Caesar salads too, but I’d stick to the pasta. This plant-based meat alternative does cost £2.95, which is slightly on the higher end for a 120g pack. But hey, it’s alternative meat, and price parity isn’t too far away.

Anay Mridul
Anay is journalism graduate from City, University of London, he was a barista for three years, and never shuts up about coffee. He's passionate about coffee, plant-based milk, cooking, eating, veganism, writing about all that, profiling people, and the Oxford Comma. Originally from India, he went vegan in 2020, after attempting (and failing) Veganuary. He believes being environmentally conscious is a basic responsibility, and veganism is the best thing you can do to battle climate change. He gets lost at Whole Foods sometimes.
Previous articleThe 17 most unhelpful vegan clichés
Next articleThe Vegan Society unveils huge mosaic in Shoreditch