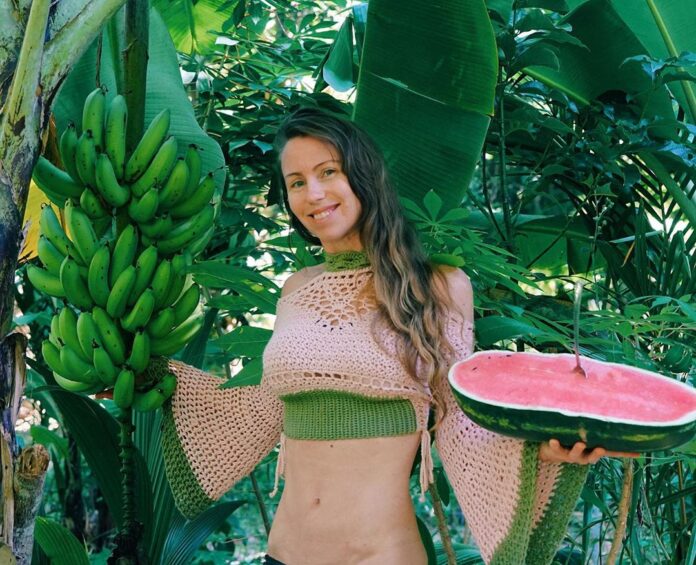 Vegan blogger Freelee The Banana Girl’s daily diet includes devouring half a watermelon for breakfast and eating vegan ice cream for lunch. Is that realistic?

If you found yourself on the vegan side of YouTube in 2014, chances are you’ve heard of the controversial Australian raw vegan YouTuber Freelee The Banana Girl, whose real name is Leanne Ratcliffe.

Originally from Queensland, Australia, in February 2018, the 40-year-old influencer went off the grid to pursue a hardcore plant-based lifestyle in the South American jungle with her partner. She follows what is known as a frugivorous or a fruitarian diet, meaning that she typically only eats fruits. Most of her daily food intake comes in the form of “mono meals” that consist of a single type of fruit, such as two whole pineapples or five mangoes. After 4 pm, she ditches her raw diet and will sometimes indulge in a cooked mono meal; for example, she once ate nearly eight pounds of cooked potatoes for dinner.

However, she sometimes will choose to have a third meal of fruit to bring up her daily calorie intake to anywhere from 2,000 to 5,000. Known for her freakish love for bananas — so much that sometimes, she apparently eats up to 20 at a time, and once ate 51 in a day — Ratcliffe has recently made a resurgence onto TikTok, where she promotes her extreme diet and reviews other influencer diets.

The initial controversy began when Ratcliffe took to Facebook to promote her newfound lifestyle. “I feast mostly on organic fruits and vegetables picked from the land. I shower in monsoonal rains and drink from pristine creeks. I quit an unhealthy relationship and found peace. I haven’t shaved my body hair, dyed my hair, or worn makeup in over 6 months,” she said. “I spend most of my day nude, free of restrictive clothing,” she wrote.

Her followers, however, soon became suspicious of her so-called “grid-free” lifestyle, accusing her of everything from secretly living in a mansion to being a fraud for using a smartphone and laptop. In late June 2018, she addressed these allegations on Instagram.

“One commenter said I was lying and living in a mansion out here and have a photographer who follows me around taking all my pics,” she wrote. “Not quite Hunny. In reality, I’ve been living in a tent under a shed for many months, through monsoonal rains and gale-force winds.”

In the same post, she addressed the person who questioned her use of electronics in the jungle, writing: “Yes, I do have a smartphone (but no reception), laptop and Internet made possible through a satellite connection. Necessary tools of communication and income. This means I can share with you what I see as an empowering urgent message. At this stage, I can’t send you that message telepathically.”

She’ll have you know, per her Instagram, that her life has been “REALLY tough at times”.

Ratcliffe has also publicly shamed women for menstruating, calling it an act of “toxicity”, and promoting amenorrhoea — the loss of one’s period associated mostly with malnourishment. As an Internet health guru famous for her low-fat, high-carb diet, she has said: “As soon as I came onto the raw lifestyle, I lost my period… I still believe that largely menstruation is toxicity leaving the body. So a lot of women are having these heavy, painful periods because they have a toxic body.”

Freelee The Banana Girl currently has over 1 million followers on TikTok. However, that doesn’t stop her comments section from being flooded with criticism towards her extreme approach and unsolicited judgement.

Read our story on veganism and eating disorders.

The dangers of fruitarianism

Freelee subscribes to the ‘Raw Till 4’ diet  — meaning she eats no cooked or heated food whatsoever until 4 pm — and blends up to 15 bananas daily into smoothies.

First, she recommends at least four litres of water a day (the NHS recommends around 1.2 litres). Breakfast is a banana smoothie clocking in at around 1000 calories, most of them sugar. If you aren’t aware of the dangers of consuming excess sugar, some important ones to take note of are that it may increase your risk of heart and kidney diseases and type 2 diabetes, affect immune function, increase stress and cellular ageing, increase the risk of cancer and depression, drain energy, lead to a fatty liver.

For lunch, another smoothie. 900 calories. Then she finishes the day with dinner that looks something like baked potatoes with a salad. Many dietitians have commented on the dangers of eliminating entire food groups and eating excessive fruits and vegetables.

Overall, this diet runs high in calories — mostly from sugars and carbohydrates — with a distinguishable lack of protein and plant-based fats. It is also low in saturated fat and cholesterol, and rich in antioxidants, fibre, minerals and vitamins. This is neither attainable nor healthy.

Vegan extremism in the media

When beginning a new lifestyle or diet, it is very important to do your research. However, it is also important to be able to filter through unrealistic standards that promote disordered eating.

You are not what you eat. While some might believe that we have to go hard with veganism in order to achieve it at all, that is not entirely true. Transitions can be slow and rocky depending on accessibility and cultural context. What matters is doing the best we can given our physical and mental capacity.

Veganism does not have to be our entire focus for it to become truly a part of our eating habits. This perspective is very understandable and there may be something to it, at least for some. An article by Plenty Vegan highlights the link between extreme veganism and disordered eating behaviours. Problems arise when this approach is directed outwards at others and if a person holds themselves to this standard.

When looking for vegan resources to follow, the article advises: “We must take care of ourselves and each other; we must be kind while also being inspiring; we can provide each other useful vegan information without shaming; a vegan resource site is meant to be supportive, it is not meant to be a depiction of a perfect life; we must all be vigilant about what we are projecting.”