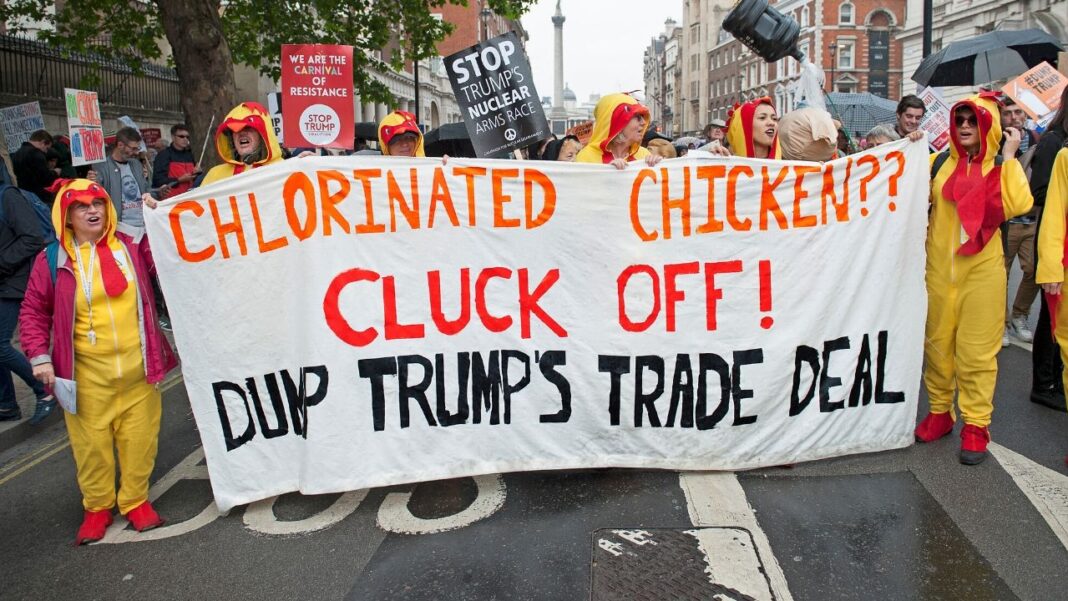 Grocery store chains across the UK are announcing that they will stop selling chlorinated chicken. This is when poultry meat has been washed with antimicrobial chlorine after slaughter to protect consumers from food-borne diseases.

Supermarkets are also vowing to stop selling hormone-injected beef, which is when cows are injected with synthetic hormones for growth. In 1997, selling chlorinated chicken was banned by the European Union due to food safety concerns. Both these products are banned in the UK too. However, they are legal in the United States, and although the ban stopped US imports from coming into the country, they are pushing to have them reimported back in the UK under a potential UK-US trade deal.

Waitrose and Aldi were the first markets to pledge to never stock the chicken or beef on their shelves. In the grocery chain’s Weekend Magazine, Waitrose’s new boss James Bailey made a statement noting they will never sell any products that do not meet their high standards, with Aldi committing to only “selling fresh chicken and beef that is 100% British”. Marks & Spencer, Sainsbury’s and Co-op Food have followed suit, with Tesco reaffirming a previous statement it made on the subject.

According to Which’s June 2020 survey, four out of five consumers are uncomfortable eating hormone-injected beef, with three out of four choosing not to eat chlorinated chicken. This also stems from environmental concerns.

This news also comes in support of the National Farmers’ Union campaign to ban imports of food that is of a lower standard than currently allowed in the UK. But Woody Johnson, the US ambassador to the UK, has previously come under fire for saying that chlorinating the chicken is vital to prevent salmonella and other food-related bacteria.

Anam Alam
Anam is a freelance writer for The Vegan Review and a student studying journalism. She is a passionate writer who possesses a range of skills ranging from audio, video, editorial and creative writing. Her goal is to educate the public and the world with stories that she feels need to be talked more about in society.
Previous article7 black-owned vegan UK businesses and why you should support them
Next articleSqueaky Bean: The food brand breaking vegan stereotypes