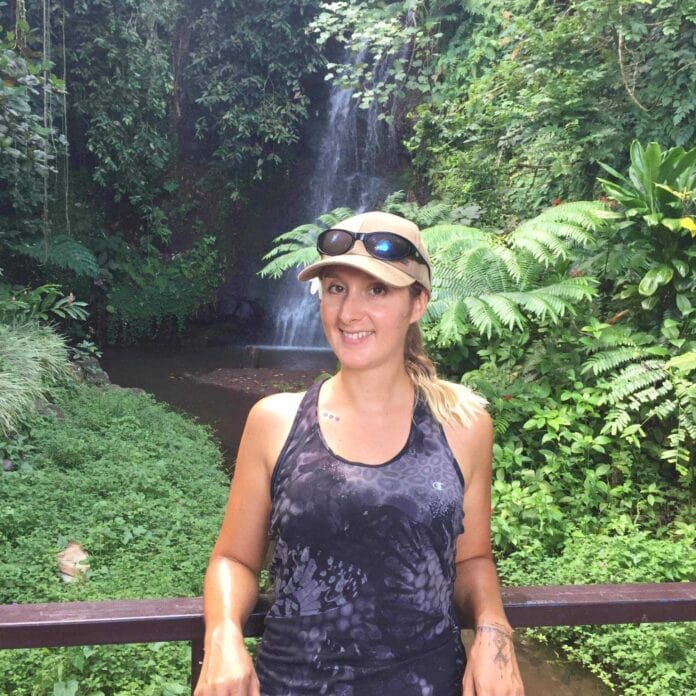 “Many of them had to go for sports shoes that weren’t very nice. Also, they were not sustainable, and they couldn’t be sure that there was no fish glue in them,” says Prévost, founder of vegan kids shoe brand Up’Swing Shoes.

She tells me, at the time, she was looking for a change in her life: “I wanted a vegan job. I wanted something to influence people to go vegan, to be more ethical. I thought this would be a good solution and the right thing for me to do, because making vegan products available is very important to make the world more vegan.”

She still ate fish, as she thought if others were looking at her weirdly, she could still say she ate fish, so she wasn’t seen as “a total weirdo”. “But then I read Jonathan Safran Foer’s Eating Animals, and then I stopped eating fish as well.”

Prévost stopped eating fish eight years ago, but didn’t know what goes behind the manufacturing of milk and eggs: “I just thought that you don’t kill the cow to get the milk and you don’t kill the chicken to get the eggs, so I didn’t see the problem with this,” she recalls. “Then when I read about how you get the milk and how you get the eggs, I was totally startled; I didn’t know this. I never imagined that I would stop eating milk and eggs.”

She hesitated for about a month and then thought: “You can just shut your eyes, but you will still know it.” Initially going vegan for six months, she ended up doing it permanently.

Prévost has come a long way in the past year, but often still has a lot of fears, as she is still at the very beginning of her business journey with Up’Swing Shoes. She was not an entrepreneur before, and she had fears about money, dealing with the business side of things, and whether she was capable: “I had a lot of self interrogations like this, but I think every entrepreneur goes through this. Sometimes, it’s harsh when you’re almost trembling about questions like this, but well, I think: This will pass.”

She feels lucky to have “good people around me”, like the F.A.K.E. movement, which organises ethical vegan fashion events, bringing various brands together to support each other. “It’s good to have all these brands around you, to have these people come up to you and say: ‘Your project is dope. I love it! You’re totally right to do this and we need this.’”

Looking at the future, Prévost has big plans: “Honestly, I really, really want to make Up’Swing international and as big as possible, not for myself, but I think it’s important to make vegan alternatives available and to make them big.”

She cites Beyond Meat as an example of this: “Everybody knows about it now, and a lot of people who are not vegan buy it. I think this is very very important: as entrepreneurs, we have a responsibility to make these things available.”

One of the best customer reactions she’s had for Up’Swing Shoes was from a friend, who bought a little pair of sandals for her daughter last summer: “She told me her daughter made her first steps with my sandals, and I was like: ‘Wow, that’s so cute!’”

I ask her about vegan role models. While there are lots of well-known people that Prévost admires, her idol is someone she knows very well. “My vegan role model is my best friend, she’s amazing. She used to be a deputy in two associations, and it was in a place where people didn’t even know what vegan was.”

On tackling global issues on a small business scale, like recycling and waste limiting practices, she says: “We should stay curious and always search for solutions. This world is not perfect; it’s not possible to have zero impact — as entrepreneurs, we have a duty to make our products sustainable and have less impact on all our surroundings.”

Like many, she believes government action is the most important step going forward. “Support from the government and officials would make things change so much quicker. We need the people in charge to get committed to the cause.”

Could the world ever go vegan? “I think there is a sense of history [in the making]. I think one day, this can and will happen, though I don’t think I will see this in my lifetime. But maybe 200 or 300 years from now. I don’t know, but I think this is going to happen.”

She is inspired by seeing more and more people who want to make something like she does. “There are so many new businesses that are coming now because people really want to propose something that helps run the world,” she says. “It’s not always easy to keep in this moment, especially with Covid and the like, but I think this positive state of mind will change the world.”

The best vegan restaurants in Miami

Vegan leather: What is it? 10 things you need to know