Chick’n, facon, turkee — sales of meat alternatives have soared in recent years, but what are their positives and negatives compared to whole foods?

With veganism rapidly growing in popularity, meat alternatives are now more popular than ever. They have swarmed supermarkets and stolen sales, causing predictions that the market will increase from $498.2 million in 2019 to $726.8 million in 2025, while Tesco, the UK’s largest supermarket, has set a 300% sales target.

There is no such thing as perfect veganism. Instead, there are several different types of vegan diets. As well as dietary, ethical and environmental vegans, vegans differ in the kind of diet they adopt. Some will eat mainly meat alternatives, while others will focus their diet on whole foods, such as fruits, vegetables, legumes, beans and whole grains. Neither of these diets can be said to be better than the other, but they both have advantages and disadvantages.

A diet consisting of mainly meat alternatives can be useful to aid the transition from an omnivorous diet to a herbivorous diet. Many meat alternatives are very good replicas of real meat. For example, THIS makes plant-based bacon and chicken that tastes, feels and smells just like meat, and Impossible creates plant-based burgers that resemble the bloody look of their conventional counterparts.

These alternatives make it much easier for meat-eaters to reduce their meat intake; in some cases, even tricking the brain that it’s eating meat. They also provide them with a wider range of options for foods, which can be important for someone who is used to eating meat. They are also often healthier, especially compared to processed meats like sausages and bacon. Richmond’s meat-free sausages, for example, contain less than half the calories and saturated fat than its pork-filled counterparts.

Meat alternatives are also usually fortified with vitamins and minerals to make them more nutritious, and being made from plants, they naturally contain less saturated fat and more fibre. They are also generally better for the environment than meat, producing less emissions and therefore having less of an impact on global warming.

On the other hand, however, despite their increasing popularity and positives, meat alternatives definitely have their drawbacks too. Firstly, although they’re generally better for the environment, hexane, which is used to remove oil from soybeans — a major ingredient in a lot of meat substitutes — is a neurotoxin and air pollutant. Meat alternatives are also often less accessible due to them being more expensive than non-vegan meats.

Additionally, for some, mock meats might be mocking meat too realistically, looking and tasting too much like real meat. As many meat-eaters moan: why would vegans want to eat something so similar to meat? The bloody burgers being a bloody good culprit. Contrastingly, some meat-eaters trying out the plant-based life might find some meat substitutes taste too little like meat — perhaps they’re partial for a bloody burger. Finally, despite meat substitutes typically containing fewer calories and saturated fat and more fibre, they are often high in sodium and can contain palm oil. 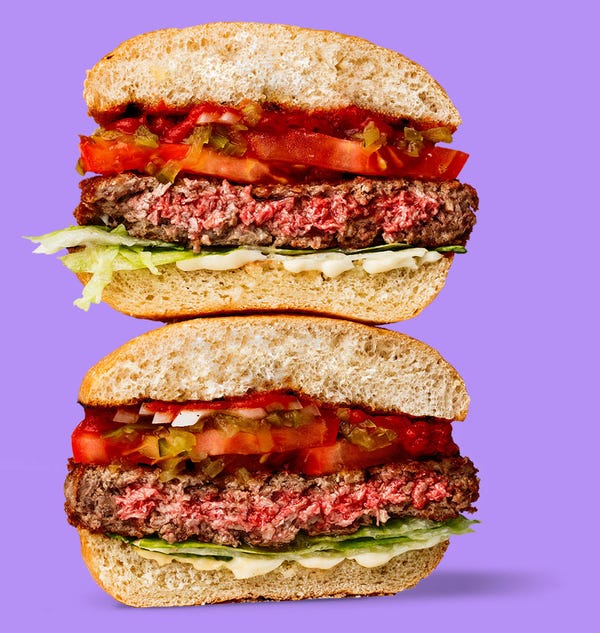 In comparison, a whole food diet is a healthier vegan diet, being much more nutritious than one based on meat alternatives. Whole foods are often naturally low in fat, high in fibre and high in protein, making them a good supplement to meat. They are better for the environment, reducing emissions and the overall impact on global warming, but it’s important to shop in season and locally to keep this impact low.

They are also very versatile and can be used in a wide range of recipes. Chickpeas, for instance, can be used to make a delicious dal but also to make surprisingly scrumptious brownies. Whole foods are also very affordable — you can buy a can of chickpeas or lentils for pennies — and they’re definitely a lot cheaper than meat alternatives.

In contrast, however, some whole foods can be steeper in price because you’re paying for them to be sourced and transported. For example, fruits and vegetables will be more expensive when they are not in season or are sourced from further away. This means that, for some, whole foods are less accessible because places that sell fresh produce are too far away.

Moreover, whole foods can be less accessible, as they not only require time and money, but also the skill to transform these ingredients into tasty, substantial meals, which requires other ingredients and equipment, including an oven, a fridge, other vegetables, starches, seasonings, etc. This requires much more money, time, effort and equipment than a pre-prepared meat replacement, for instance.

Finally, whole foods are not alternatives — in fact, they are nothing like meat. So, transitioning from a meat-heavy diet to a whole food diet might be a bigger — and possibly less enjoyable — jump than sinking your teeth into that burger.

Overall, meat alternatives and whole foods are both viable options when it comes to adopting a vegan diet. They both have their advantages and disadvantages concerning health, the environment, accessibility, etc. Neither of these diets is better than the other, but as with all diets, balance is best. To ensure you’re getting all your nutrients, first focus on whole foods, but if you want a bloody burger, then bloody well go for it.

Chloë Morgan
Chloë is a recent English graduate from Loughborough University. She tries to use her writing to raise awareness of important issues in an attempt to help others. Her passions lie in social justice, mental health and sustainability. After taking part in 'Veganuary', she developed an interest in veganism and recently went vegan. She is also trying to boycott fast fashion as much as possible by shopping second-hand and more sustainably.
Previous articleHalf a million animals in India were victims of crime in the 2010s
Next articleMaking your first vegan investment