Vegan Halloween sweets: The best of the best 2020 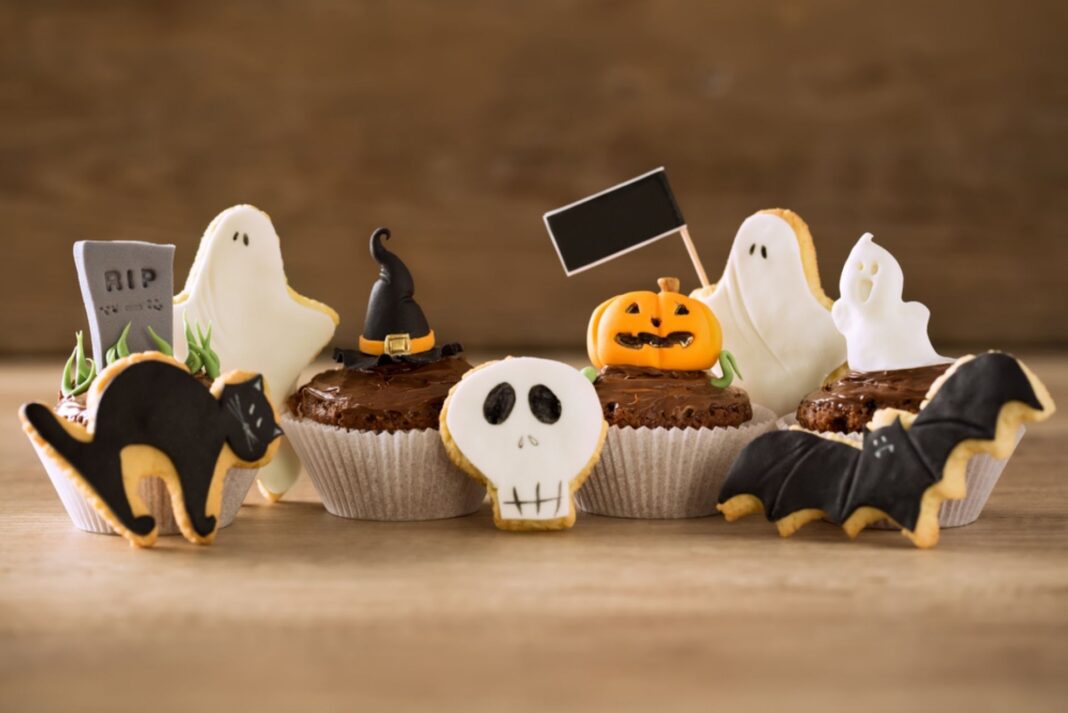 Which supermarket has the best selection of vegan Halloween sweets this year? Find out what’s worth buying and where to avoid.

It’s the season for scares, but don’t get taken aback by hidden animal products in your treats this year. We visited all the major supermarket chains in the UK to see what they had for plant-based petrifiers and here are our top picks: 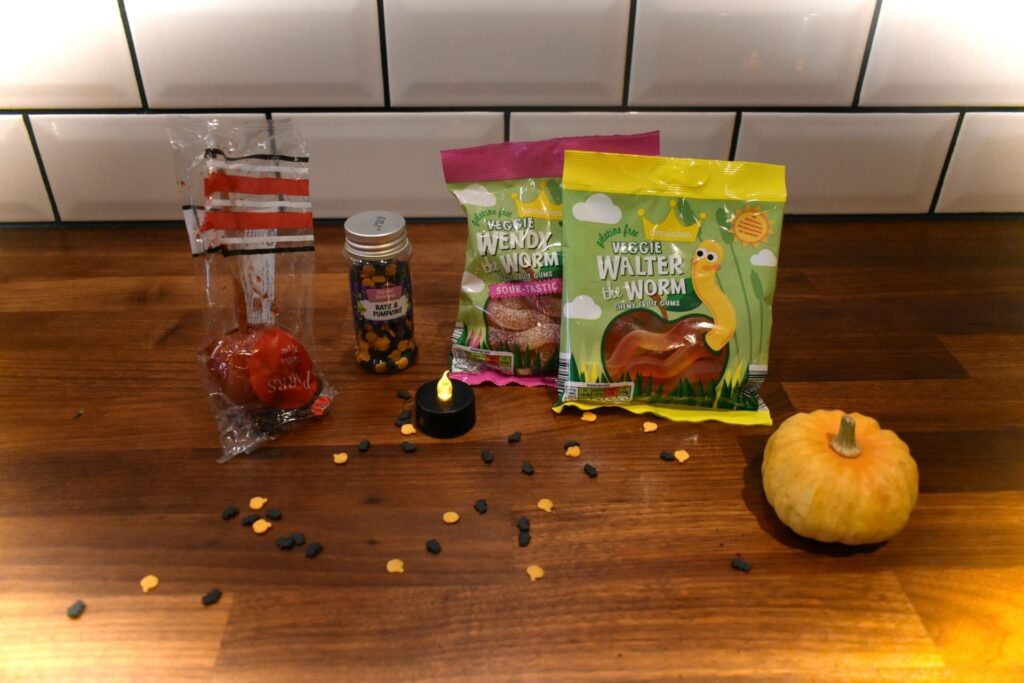 A hero to many a vegan, thanks to its extensive range of inexpensive big shop must-haves, Aldi disappointed a tiny bit. Bonus points for being clever enough to move the always-available Wendy and Walter Worms to the Halloween display, but other than them, it was slim pickings.

We still snagged ourselves a toffee apple (nostalgia always wins) and some appropriately shaped bat and pumpkin cake sprinkles. The prices definitely reinvigorated our love for Aldi, as did the growing Christmas section. 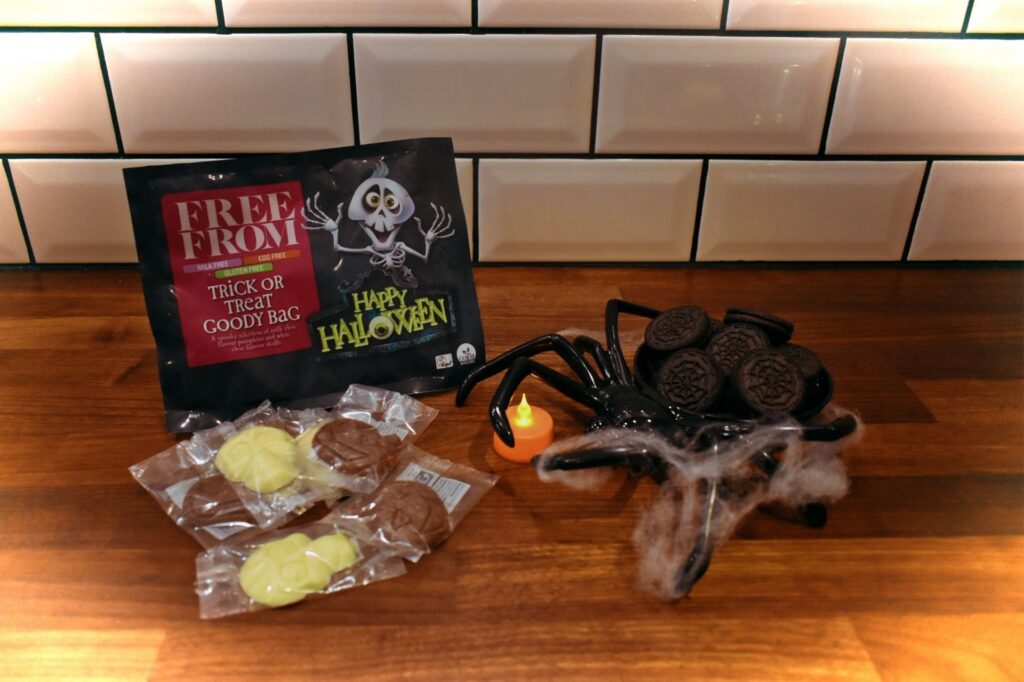 Asda can always be counted on for a huge amount of seasonal paraphernalia and in terms of costumes, it can’t be beaten. The vegan Halloween sweets were a tiny bit lacking though. Oreo stepped up its game, with cobweb biscuits and orange-coloured filling and Asda was the only shop that we found these in.

There were also fizzy fangs (available throughout the year) and a special bag of Free From chocolate Halloween shapes. Fun but not very adventurous, though it all tasted good enough for a horror film binge session. 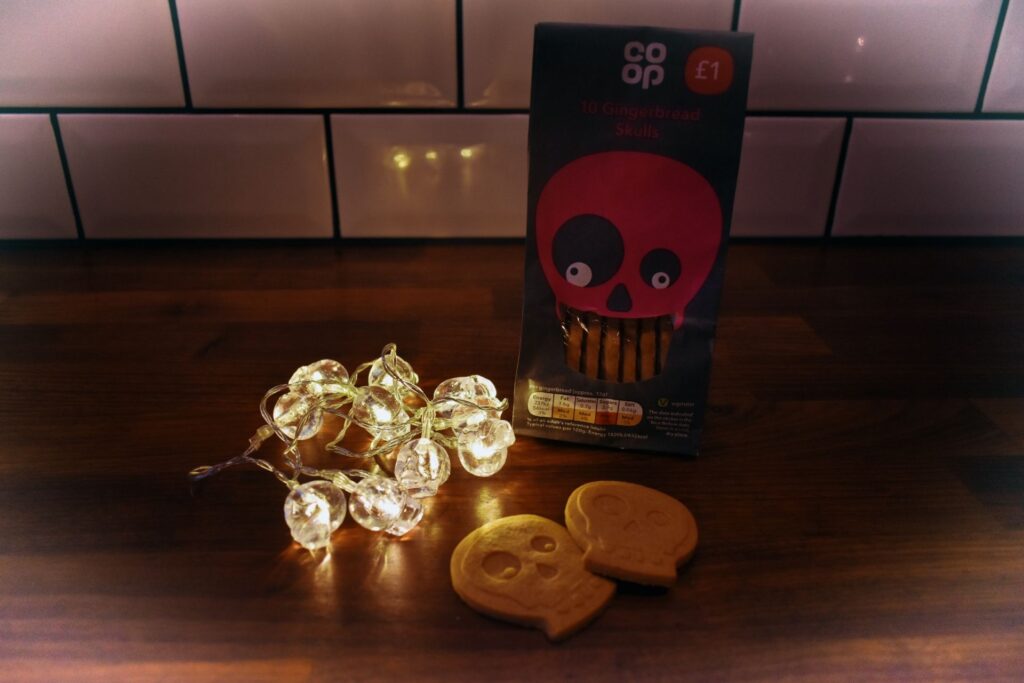 We didn’t expect too much from Co-op. Its shops tend to be smaller and are already keeping many vegans happy with bakery doughnuts, but what a pleasant surprise!

A cheeky bag of gingerbread skulls hit the spot both in terms of taste and spook-appeal. There’s scope to decorate them with icing, if you have the inclination, but if not, they are cute, easy to portion and taste lovely.

Boo to Lidl and not in a trick-or-treat kind of way. Not a single vegan Halloween sweet to be found. This could have just been in the two branches that we visited, or perhaps it is just gearing up for some big Christmas offerings (we’ve already heard whispers of a fantastic Wellington). 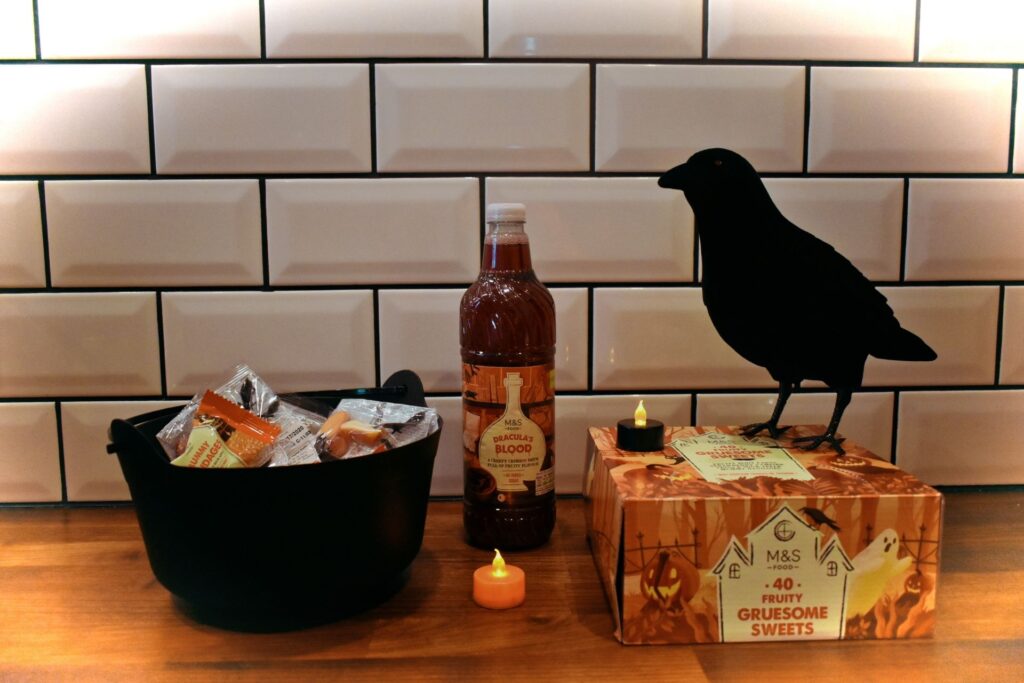 We don’t remember the last time M&S disappointed and our spooky sweet hunt was as successful as we hoped. And then some. Aside from a good selection of very cheap decorations and accessories, we found a fantastic box of gummy and chewy treats, all of which are vegan-friendly. Individually packaged, they would have worked well for doorstep callers, but given social distancing measures this year, they’ll make for fun lunchbox additions or an ill-advised eating challenge. Bonus points for the rogue fruit squash relabelled as ‘Dracula’s Blood’. Fun.

Note: Don’t get caught out by the veggie Colin the Caterpillar spooky bags. They have beeswax as a glazing agent, so are not vegan-friendly. 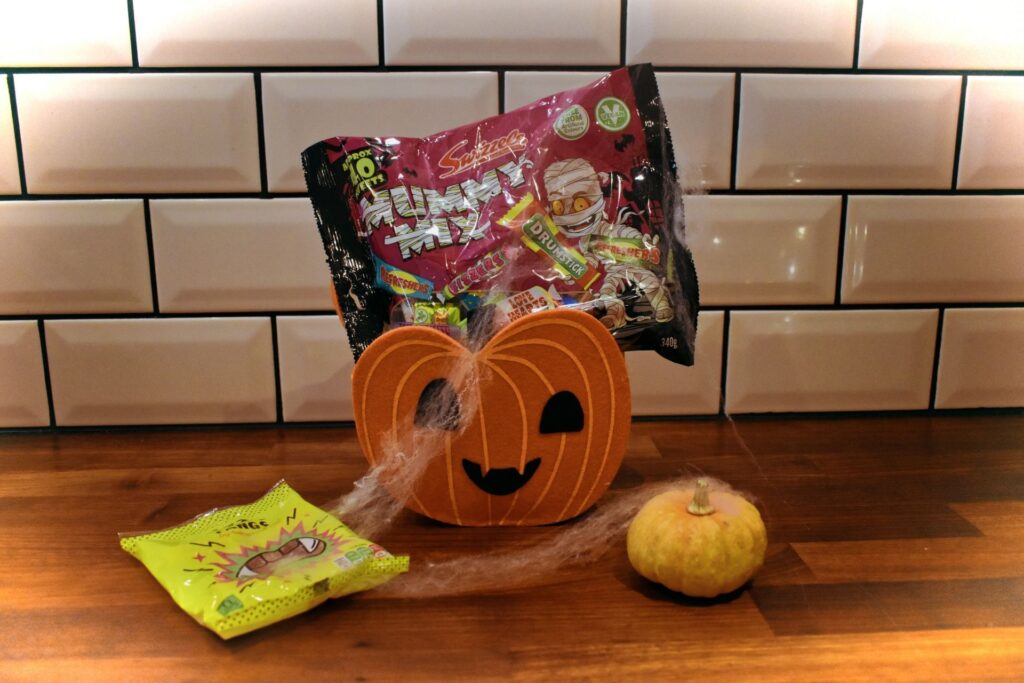 A shock contender for the top shop this year is Sainsbury’s. It’s the only big supermarket to have bought in the Swizzels ‘Mummy Mix’ — a bag of nostalgic sweets labelled clearly as vegan. Refreshers, Parma Violets and Love Hearts can all be found, plus Sainsbury’s has its own fizzy fangs on offer as well. We liked these ones a bit more than Asda’s, purely because they were a touch sourer.

The second boo goes to Tesco. Not a single vegan Halloween sweet to be found. Not even a Swizzels multipack! Plenty of gelatine-filled horrors though. Tsk. Shame on you, Tesco!

Given all the furore a while back when we assumed Waitrose didn’t like vegans much (all thanks to one very silly ex-editor of its magazine), you’d be forgiven for thinking that there would be plenty in the way of vegan Halloween sweets. You would be mistaken, however. Plenty of branded goodies that aren’t suitable for plant-based people, but nothing for the dairy-free brigade. 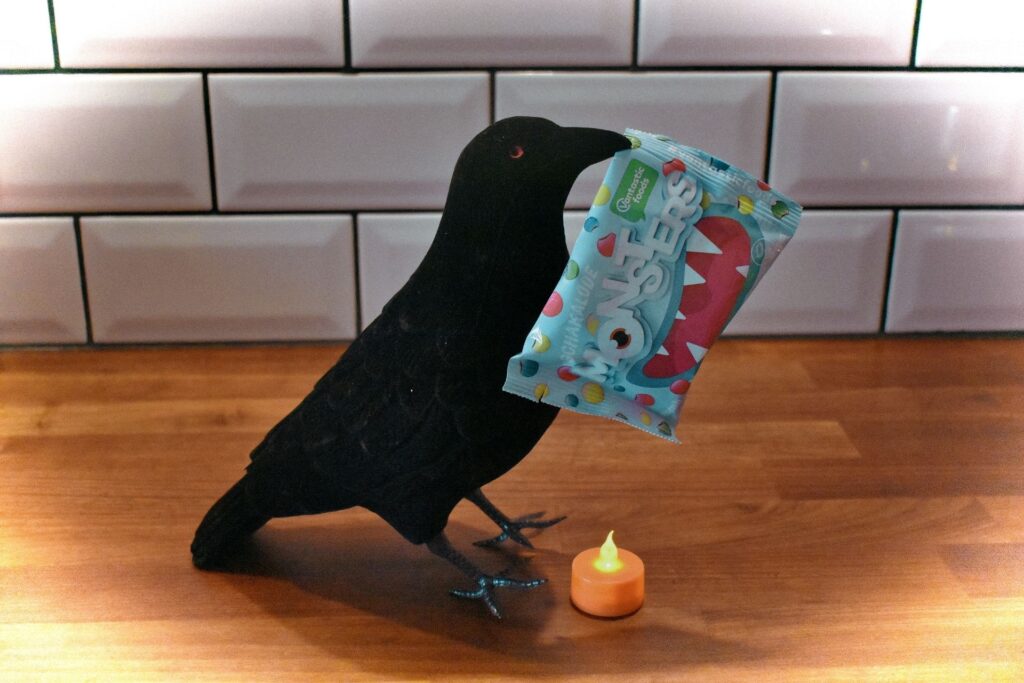 A small yet sumptuously stocked specialist shop for vegans, we couldn’t resist seeing what it had for Halloween advocates. Though the Dracula Round Ups (Wagon Wheels for the uninitiated) were all sold out, we did get a packet of aptly named Monsters, from Vantastic Foods. Nothing spooky about them, just a good Smarties dupe in a fun packet. As with all artisan sweets, they were not cheap, but we can confirm that they were delicious and supported two indie businesses. Nothing scary about that.

For value, we don’t think you can go wrong with Aldi. Clearly labelled as vegan, tasty and so cheap, it is a winner. That being said, Marks and Spencer is hard to beat in terms of aesthetics.

Amy Buxton
Amy is a committed ethical vegan, raising a next generation compassionate human with her husband and their beloved dog, Boo. A freelance writer with a background in PR, she decided to use the COVID lockdown period to refocus her client base and has come to The Vegan Review as a senior writer and editor, before moving into her external content director role. "What we should be doing is working at the job of life itself" is Amy's mantra, courtesy of Tom from The Good Life.
Previous articleHungry Planet’s Jody Boyman: ‘Our planet is abundant, but not without limit’
Next articleThe rise and rise of vegan weddings in Israel