Life on the veg: how vegans survive at the HS2 rebellion camps Veganism can be an extreme lifestyle for those on the front lines of activism. Jane Cahane speaks to vegans in HS2 resistance camps about the challenges they face.

Even in August, the HS2 protest camp in Jones Hill Wood would feel freezing at night to those not used to it. This unique and threatened wood — which famously inspired Roald Dahl’s Fantastic Mr Fox and, more recently, featured in the news after veteran eco-warrior Swampy became involved in the infamous Battle of the Beancan — hosts many mature beech trees whose need for moisture creates a distinctly cooler microclimate.

Now, in early March, blustery winds and sleet are rattling through the camp, causing the tarps to flap wildly and threatening to blow away less-secure tents. Along with a handful of local supporters, a group of HS2 resistors — some long-term, others newer — are huddled around a fire in an effort to get warm and dry after hours of battling the elements and HS2.

Within a few hours, HS2 had dismantled the collection of treehouses, Stop HS2 banners, tents and wooden structures set up only a few days ago to protect the row of mature, hundreds-year-old oak trees along this lane, known to host rare bats and nesting birds. Thanks to new recruits and local support, the Jones Hill Woods camp still stands. However, eviction remains an imminent threat, so support and donations for the ongoing legal challenge are still urgently needed.

Despite the cold and wet, deep mud, two resistors are walking around the camp barefoot, having just been evicted from treehouses at the Leather Lane camp. Their refusal to support the animal industry — either by eating meat or wearing shoes made from leather — is total. For the many vegans who live here, the fight to preserve these biodiverse-rich woods outweighs any need for personal comfort — not least the constant threat of unnecessary violence from police and NET.

A huge pot of rich vegan stew, made from donated vegetables and chickpeas from a tin sourced from a local bin, is on one fire, while two resistors are frying eggs over a second, smaller fire. As FL explains, not all on the camps are vegan; some eat eggs and dairy, or even meat sourced from bins or donated by locals: “Everyone wakes up at different times, so they make and eat other stuff during the day, but all of our communal evening meals are vegan — people can add their own ingredients from the shared kitchen or their own supplies if they like.”

Do the committed vegans on the camp struggle with those who aren’t? “An attitude of tolerance and respect for others’ choices is essential to peaceful communal living, especially when you join a camp where people have been there much longer than you,” says LJ. “I’m not going to judge other people, as it’s hard to avoid wearing leather or using plastic. Debates around issues such as palm oil are interesting, but we don’t have the energy to argue — there’s enough stress from the campaign!”

FL adds: “We all care about the animals whose homes are being ripped apart by HS2 here, although vegans are maybe a little more empathetic because we are saving animals from being eaten and concerned about them being tortured in slaughterhouses.”

NC chimes in: “We are all resisting the capitalist system that is allowing random infrastructure projects like HS2 to go through. The meat and dairy industry is part of the same system destroying our planet that we are resisting. People do what they do out of habit, because they don’t believe there is an alternative — but there is.”

Although the HS2 resistors occasionally buy their food from shops, much of their food is donated or rescued from local bins. They often find plenty of perfectly good food. “Mostly mashed potatoes, for some reason,” says FL, laughing.

For many on the camps, wastefulness is a bigger issue: “Waste of food from shops and supermarkets is part of the same disconnect causing the loss of these beautiful woods and the local farmland nearby.,” says PE. “They have no idea where their food has come from. Being vegan is one way to be responsible and connected to the food we eat.”

“We can’t always be too choosy about what we eat as a lot of our food is donated by locals. Occasionally, people give us vegan cheese and sausages, but mostly it’s tinned vegetables — lots of tinned tomatoes — plus beans, rice, pasta, and fresh fruit and vegetables,” says SD. Some have food intolerances to gluten, dairy or nuts, so oat milk is preferred.

“Being vegan is a much healthier lifestyle — plus you’re living in the fresh air,” says LJ, who in her 50s is a glowing testimony to the possible benefits of eating only fresh fruit and vegetables and living in the wild. She also avoids using oil, salt and sugar in cooking and feels she is much healthier for it. Is getting enough protein ever a worry? “Not really, though some rely on vegan supplements. I get plenty of protein from beans and pulses.”

Suddenly, DP rustles through the camp on his way to fetch a wheelbarrow. “Welsh Kitchen is here!” he shouts. We follow him up through the field to the road, where a car has just arrived with a huge pot of steaming vegan bangers, broccoli, minted potatoes with rosemary gravy. Two smiling, cheery volunteers dish the food into containers for transport back to the camp.

All through winter, volunteers working with Welsh Rebel Kitchen have been delivering hot vegan meals every Monday, Wednesday and Friday to HS2 camps all up and down the line. They typically prepare one big main meal with trimmings three days a week, and supply another pot of soup for the next day, so meals are covered for six days. Their ethos, “Food is Medicine”, is belied by the joy on resistors’ faces as their food arrives. The camps particularly love their homemade garlic bread, onion bhajis and chilli jam. And their homemade energy balls were a godsend to the anti-HS2 ‘badgers’ in the tunnels at Euston. 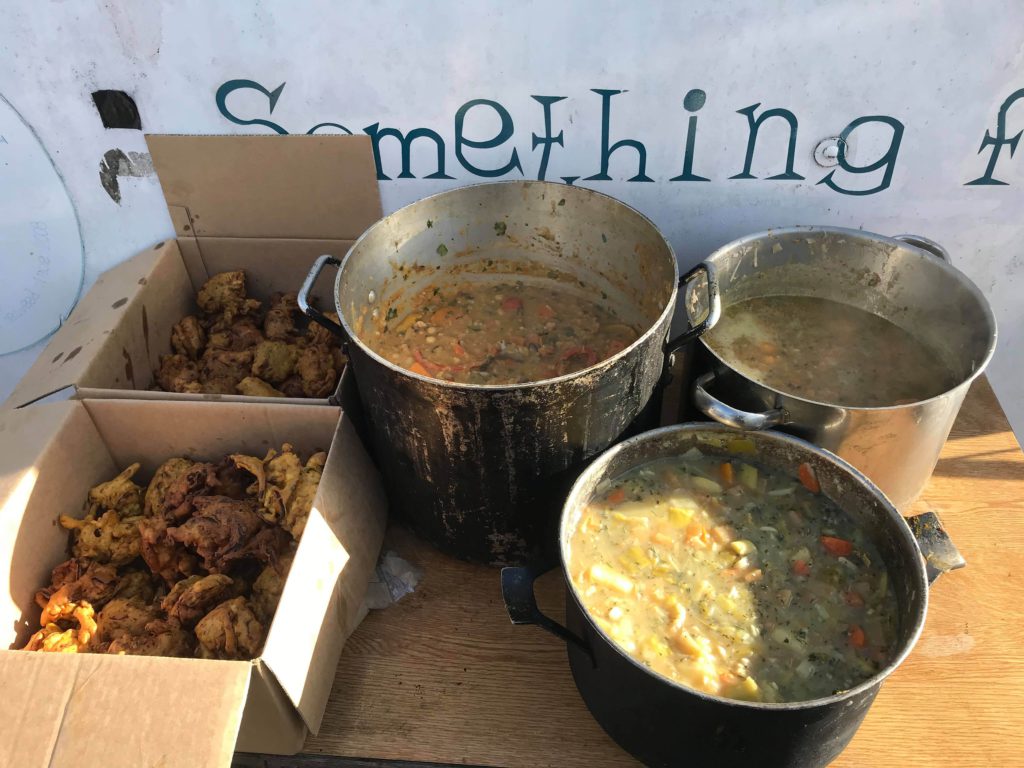 “When I was a teenager, I lived on a protest site on Greenham Common,” explains Welsh Rebel Kitchen founder Myfanwy Craft. “Every night in the winter, a few older ladies would come in a van and deliver fresh hot meals and dry bedding. So I feel like I’ve completed the circle by doing this. I know what it’s like trying to prepare vegetables in the winter as I’ve done that before.”

After branching off from a similar outfit run by Extinction Rebellion Cardiff, Welsh Rebel Kitchen began by delivering meals to festivals and large XR events. The volunteers used to deliver the food using rucksacks and hiking into the camp in larger teams of 10 to 15, but because of the pandemic, they are now only going out in bubbles as a smaller team of three or four.

After being given a van in November, they moved to a scrapyard in Buckinghamshire, where they could focus on preparing and delivering healthy vegan food for the HS2 resistance camps over winter.

“It’s so much harder to get donations in the winter, so it’s great we have been able to help,” says Craft. “After the spring equinox, they’ll have more people visiting and donating, so we’ll wind things down and go back to doing festivals after a break. But we’ll be back next winter — even bigger and better.”

The initials in this story have been used for privacy. Most HS2 resistors identify as gender-neutral.

Jane Cahanehttps://smallwriteratlarge.com/
Jane Cahane is a freelance journalist and environmental activist who has been writing about and supporting the HS2 resistance since October 2019.
Previous articleMouthfeel and texture the big challenges for Asia’s plant-based industry
Next articleAlt-protein sees record $3.1 billion investment in 2020