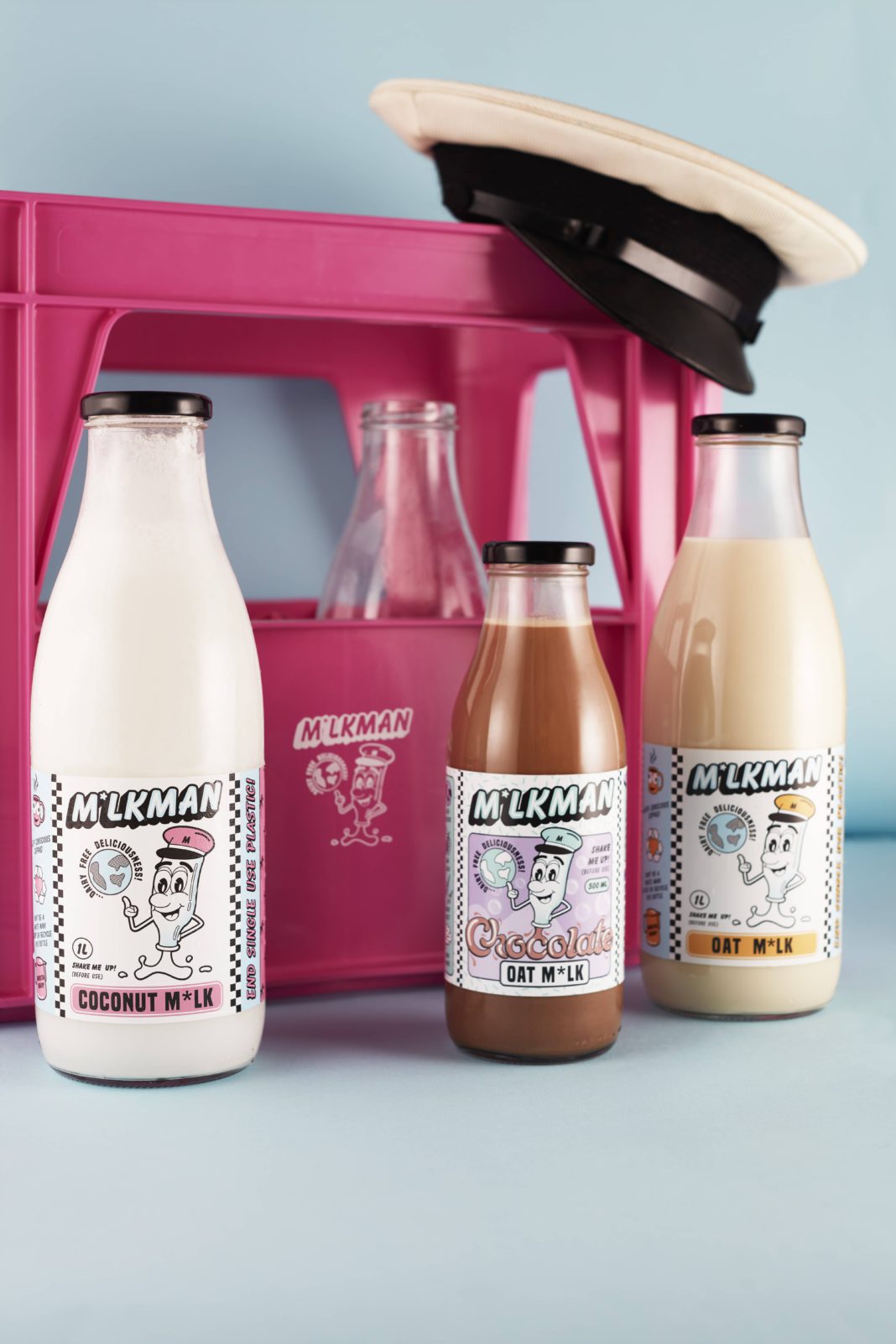 In 2017, a few people were distributing flyers in East London about a dairy ban. The flyers directed to a website called No Dairy Ban London for people to register their indignation.

But when you visited the site, you’d see a holding page and then be redirected to a website for M*lkman. A pop-up read: ‘We’re really sorry but we didn’t want to waste your time, but we just want to introduce you to this new service.’ It was a milk delivery service — for plant-based milk.

It was April Fool’s Day, and the con worked. M*lkman received a few signups and it snowballed from thereon. Apart from being a vegan milkman service, the special thing about it was the glass bottles. Jamie Chapman, its founder, used to run a vegan smoothie stall and wasn’t comfortable with the amount of waste he was creating through Tetra Paks cartons.

He also figured that creating his own alt-milk would be cheaper and more eco-friendly. “ I made some almond milk and blew myself away with how good it was. It was incredibly different from anything I’d tried in the shops.” Bottling and selling those milks was a shower thought, and it soon became a reality.

Four years on, M*lkman is still going strong. In fact, it’s gearing up for big developments this year. Currently selling predominantly in London, Brighton and Bristol, it enlists FarmDrop and existing dairy delivery services. But when it started, Chapman used to go around and deliver the milk himself on his bike. Now, the service has purchased an electric van to restart its own direct-to-consumer deliveries. 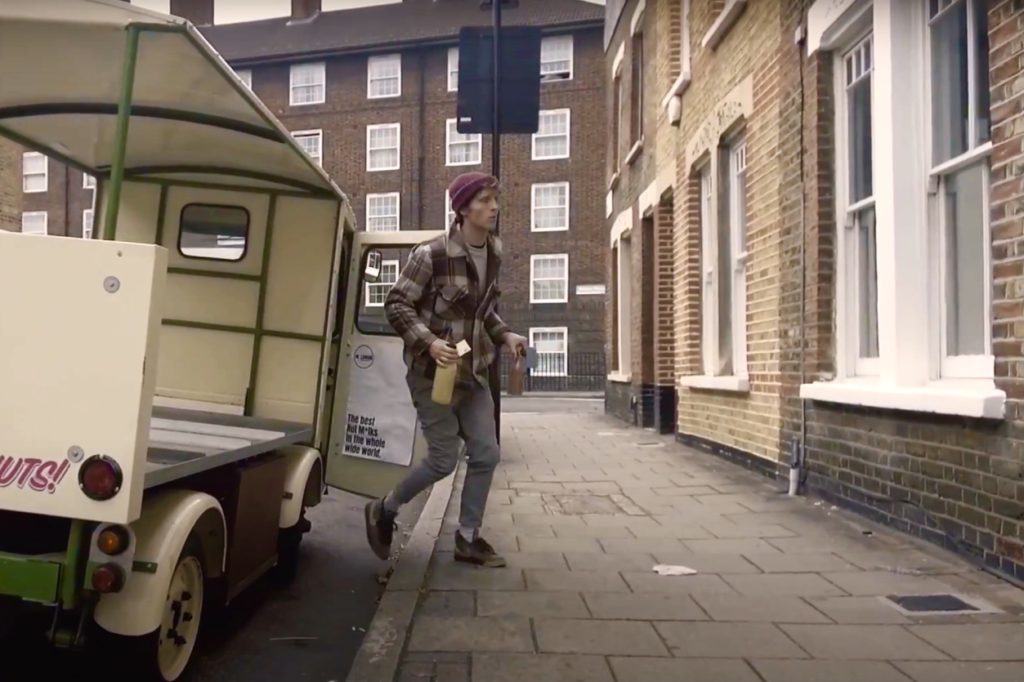 It’s a required change as the vegan milk delivery platform grows. The pandemic saw it pass an incredibly busy period. “Captive audience,” says Chapman. “It’s a horrible term, but everybody was at home… and people have been introduced to more sustainable methods during lockdown.”

The delivery partners had to bat away customers as they reached maximum capacity. The sustainability factor is surely a huge hit, but M*lkman’s unique appeal is the return-and-reuse policy. Once you’ve drunk the vegan milk, you return the bottle to the milkmen, who return them all to a depot, which ships it back to Chapman and his team’s base. There, they wash the bottles out and go again.

Chapman says there’s a nostalgic element to it: “Millennials would just about remember milkmen. It’s a small thing you can do for which you can see a positive net gain.” He calls the feeling of reusing something “instant gratification”. “People are digging that at the moment. With reason as well.”

The issue with being sustainable is that it can be expensive. Using glass over Tetra Pak cartons is “way, way, way more expensive”, according to Chapman. Before the return-and-reuse was possible, the retail price reached £2.75. He found that far too high and prohibitive. “You can buy a pint of milk for 60p or a litre for a quid, but you’re having to pay £2.75. It acts as a barrier.”

Cutting costs was important. Reusing the bottles reduces them significantly. The labels are designed to stay on the bottles too. And everything is sent in crates, which means no packaging and another cost eliminated. That way, M*lkman is able to bring the cost to £2.10 per litre.

And that reduced price will be reflected in the rollout of its new oat milk. Currently, the brand sells oat, coconut and chocolate oat milks. But when he was starting out, Chapman tried as many as 12 different versions. How did he decide what the best options were? “The problem was,” he tells me, “everything worked.” 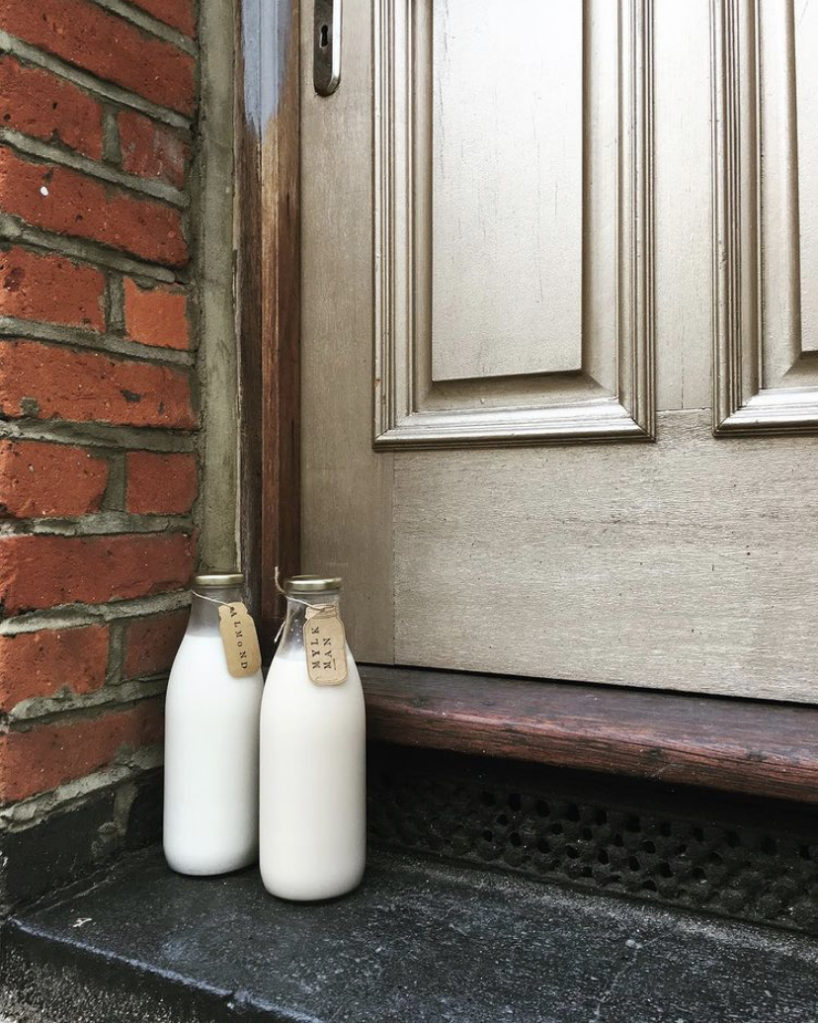 Pistachio milk, three kinds of almond milk (one of them an “absolutely insane” 25% version), turmeric milk, matcha milk — you name it. Since he was making everything himself at the time, it was quite demanding and overwhelming. “As we scaled, we identified that oat milk was by far the most sustainable option for us.”

The new oat milk, due to be launched in May, is gluten-free, organic and uses Scottish oats. The dipotassium phosphate — which acts as an acidity regulator so it can hold up in coffee — cannot be used for organic purposes, and has been replaced by sodium citrate.

The milk will be aimed at retail as well as coffee shops. While the current M*lkman oat milk is in a couple of small cafes — including Chapman’s Hackney-based Love Shack — he hasn’t had “a million per cent confidence” in his product until now. “What we’re looking to do is approach coffee shops currently using Tetra Paks and say: ‘We’ve got an amazing product, same sort of price, it’s organic and works incredibly in coffee. We can drop it off three times a week, collect the empties, and just create a circular economy.’” 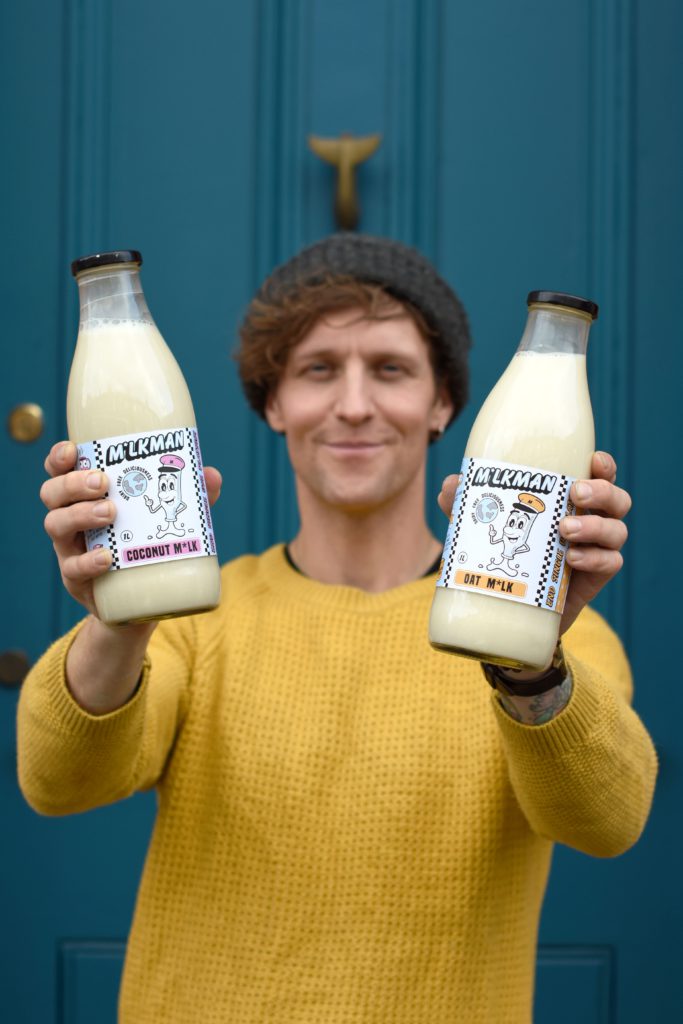 Given the name vegan milk delivery service’s name, I ask him about Amendment 171 and the plant-based dairy labelling ban, due to be discussed in the EU parliament later this month. “Absolutely bonkers and ridiculous and stupid,” he calls it. “[It’s] just an example of the milk lobby trying to power through scare tactics that emanate from being scared themselves.”

He applauds Oatly for taking the baton to raise a voice against the law. But he’s not particularly worried. “We’re fairly safe because of our branding,” he explains, adding: “It’ll be interesting [to see] — we’re not technically part of the EU — how that’s going to affect the UK and whether we’ll be bound by that legislation anyway.

“Dairy’s on the way out. You’ve got a whole industry forced on its knees,” says Chapman. He says farmers haven’t profited from dairy in years, and he wants to approach them with a viable alternative to switch to oat pasture, which will help sustain their business as well as protect animals and the environment.

He also wants M*lkman to own a farm with a 100% closed-loop system — from seed to shelf. That would coincide with a UK-wide vegan milk delivery network. The ultimate dream for Chapman, though, is to have a shelf-stable plant-based milk in a container that is completely environmentally friendly. Although it’ll take a while to get there, M*lkman looks ready to deliver.

Anay Mridul
Anay is journalism graduate from City, University of London, he was a barista for three years, and never shuts up about coffee. He's passionate about coffee, plant-based milk, cooking, eating, veganism, writing about all that, profiling people, and the Oxford Comma. Originally from India, he went vegan in 2020, after attempting (and failing) Veganuary. He believes being environmentally conscious is a basic responsibility, and veganism is the best thing you can do to battle climate change. He gets lost at Whole Foods sometimes.
Previous articleSky News launches first primetime news show dedicated to climate change
Next articleThe world’s first legal challenge against factory farming