Vegan sausages: Are They Good For Us? 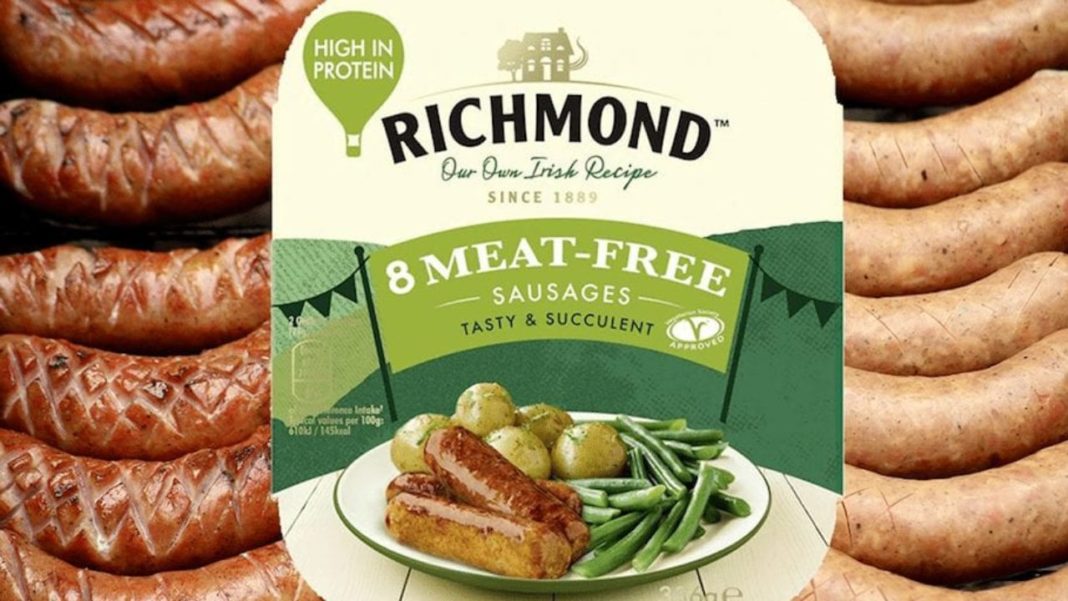 Meat Substitutes on the Rise

With the growing demand for meat substitutes, many food companies are now offering plant-based alternatives to keep up with competitors and consumer needs. Considering the success stories of Beyond Meat and other faux meat producers, it is no big surprise that longstanding brands like Richmond are changing their options to tap into the growing popularity of plant-based diets.

Although Richmond sausages have been around for over 100 years, it wasn’t until last year that the Irish meat retailer, Kerry Foods, hit the plant-based market with the launch of its first-ever Richmond Meat Free Sausage. 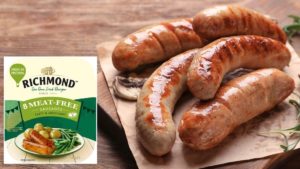 Down at the meat aisles of Morrisons and Tesco, Richmond’s vegan sausages are available nationwide for just £2.20 for a pack of eight. The wallet-friendly sausages have also been subject to high praise for their authentic meat-like taste.

Jermaine Davis,  23, from London said: “From what I remember form my meat eating days, four years ago, they just taste like the meat containing version.”

He added: “The Richmond sausages are much different both in taste and texture to any other vegan sausages that I have had. They are much more realistic. Tasting them was quite nostalgic actually, as it took me back to the days when I had sausage casseroles as part of my Sunday dinner.” 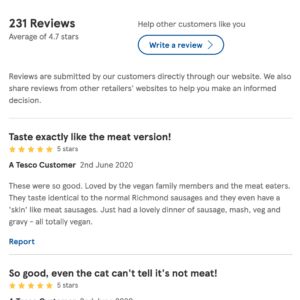 Scrolling through Tesco’s customer reviews for the Richmond Meat Free sausage, many agree with the view that these vegan sausages come pretty close to the real deal.

What are Richmond Vegan Sausages Made From?

The company’s aim was to carefully create a vegan sausage that mirrors the taste and appearance of its traditional pork sausage. Made mainly from soya-based proteins, the Richmond Meat Free sausage contain less that 60 calories per piece. The vegan bangers are also rich in wheat, plant-based oils and fibre. Natural flavourings such as yeast extracts, herbs and spices provide the sausages with a meaty taste that is said to easily fool customers into thinking that they are eating a real pork sausage.

Are vegan sausages healthier than meat?

Although many people seem to believe that meat-free sausages are automatically the healthier option, there is currently no strong scientific evidence available to prove that this is actually true. In fact, concerns that vegan sausages and other meat alternatives might just be another set of overly processed industrial foods with little or no additional health benefits to ‘real’ sausages, have been increasingly raised in recent times.

On the other hand, according to the World Health Organization, processed meat which refers to any meat that has been modified to improve taste or to extend its shelf life, and includes bacon, ham and sausages can cause cancer. In addition, the report has shown that just 50g of processed meat a day which is less than two slices of bacon can increase the chance of developing colorectal cancer by 18%. Pork sausages are also usually high in saturated fats that can increase cholesterol levels which are linked to a higher risk of heart disease. By simply avoiding processed meat, the plant-based option seems to be slightly healthier, but when it comes to unhealthy salt, vegan sausages can be just as bad as their animal containing counterpart, the Metro reported.

While there might be confusion over health benefits of vegan sausages, the positive impact that plant-based food has on the environment is more obvious. Not only do vegan sausages use less water and land, most importantly, they do not require animal suffering.

Thanks to the developments in food technology, vegan sausages have become uncannily realistic in both appearance and texture. This makes them a great alternative for people wishing to reduce their meat intake and for those who are concerned about animal welfare and climate change. However, the health benefits of plant-based sausages don’t seem to differ much from meat and although vegan sausages have come a very long way, there is still room for improvements.

Rebecca Horn
Rebecca is an aspiring journalist who creates research-driven content for the Vegan Review and the Brunel Times. Originally from Germany, she currently studies journalism at Brunel University in London and has worked at the events arm of the Financial Times. Knowing that knowledge is power, Rebecca is undertaking a one-year NCTJ Diploma alongside her degree and actively contributes to the University newspaper. As a strong believer in the power of asking questions, she believes that everyone has a story to tell
Previous articlePlant-based milk surcharges: enough is enough
Next articleWetherspoons vegan options: A British staple turns inclusive