Vegan vs Plant-Based: What Is The Difference? 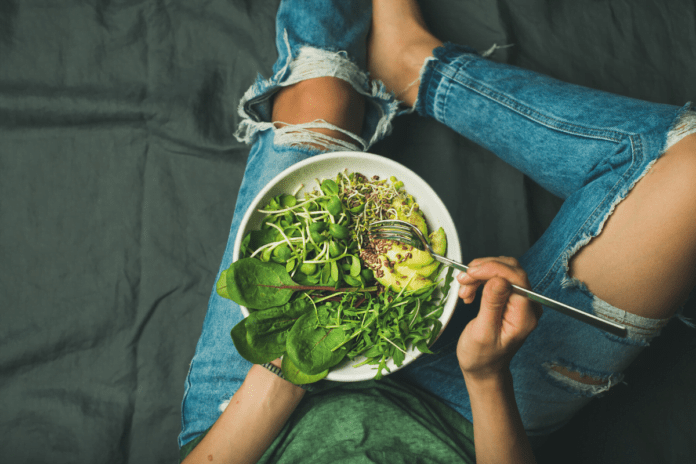 What is the difference between someone being vegan vs plant-based? The two terms are often used as synonyms. But while they share some similarities, they do not share the same values.

What is the difference between vegan and plant-based?

The two seem very similar as vegan diet often comprises of foods like plant-based meat substitutes and such, but they are not the same.

Both diets include eating a variety of nutritious foods like vegetables, grains, nuts, legumes, seeds, and fruits. But the main difference is that veganism is a lifestyle. And not only a type of diet while being plant-based only means following a certain type of diet.

To understand why these definitions are not the same. You have to look at the difference between the vegan diet that comes with a vegan lifestyle and a plant-based diet.

What is a plant-based diet?

Plant-based diet can also exclude foods of animal origin including meat, fish, poultry, dairy and eggs. But according to Healthline is better defined as low fat, high fibre, a vegetable-based diet that focuses on health rather than ethics.

‘’I like saying I plant-based. Because it’s an easy way to generalize my eating habits without defining myself as a core member of a community.’’ Says Paulina Utnik, a plant-based diet follower from London.

‘’I find that as soon as you make a statement of being vegetarian or vegan, you placed under a microscope.’’

The goal of this diet is to maximize consumption of nutritious plant foods while minimizing processed foods, for example, oils.

‘’I do not consume any direct animal products. And try to stay away from processed goods such as things in plastic or ready meals,’’ says Paulina.

Total fat generally restricted as it stresses eating whole foods. Meaning food that undergone little processing and as close to its natural state as possible.

While it encourages eating lots of vegetables (cooked or raw), fruits, beans, peas, lentils, soybeans, seeds, and nuts, it still allows the consumption of certain animal-derived products as reported by the Nutritional Update for Physicians.

Paulina says: ‘’I eat what my body craves and what makes me feel good, physically and mentally.

‘’ If I feel like I want to try something [animal products] of that sort, I do not suppress my cravings for it. Plant-based means my diet based in plants, but not limited to it.

‘’I haven’t had any actual meat products. But sometimes I will have fish if I feel that my body wants it. Over time I’ve given up most dairy products, I use dairy alternatives but still eat eggs on a near-daily basis.’’

What is a vegan diet?

Veganism is not only a diet but also a movement based on ethics, animal welfare and also environmental concerns, according to Healthline.

The Vegan Society defines veganism as: ‘’a way of living which seeks to exclude, as far as is possible and practicable, all forms of exploitation of, and cruelty to, animals for food, clothing or any other purpose’’.

PETA classifies veganism as not consuming, wearing or purchasing of anything that is animal-derived. This often includes clothes, cosmetics, personal care products, shoes and accessories, and cleaning supplies.

Vegan diet is based on ethical or religious reasons and excludes not only abstaining from meat, dairy products, eggs, and honey, but its followers also refuse to use products that are animal-derived or have been tested on animals. Vegans do not wear leather, fur, silk, or wool.

PETA concludes that the main reason for the vegan diet is ‘’to help animals.’’ That why words like cruelty-free and animal welfare closely linked to veganism.

Vegan diet also does not require the consumption of whole foods, restricting fats or refined sugar. Unlike plant-based diet, it can actually be really unhealthy as vegans can treat themselves to chips, chocolates, fried food and snacks.

Is vegan or plant-based diet healthy?

However, everyone following plant-based diets is encouraged to take multivitamin supplements of vitamin B-12 or include foods that are fortified with this vitamin in their diet.