Vegan world triathlon champion Kate Strong: ‘My biggest success was doing something for me’ Kate Strong had just emerged from a toxic relationship when she first put on a pair of trainers. This year, she’s attempting three world records.

Standing before a map of the US, world triathlon champion Kate Strong points to the route of the Race Across America, which thousands of cyclists complete every year — but only 18% of which are female. The 42-year-old, who is breaking down barriers for female athletes across the world, tells me her biggest success was the day she first put on a pair of trainers and started doing things for herself.

In 2012, six days after being dumped by her fiancè, the vegan athlete started training for a triathlon. She tells me sport had always been a part of her life, but most of the relationship left her “trapped” to the point where she’d have to sneak out, leave her phone in the letterbox, and run around it. Just in case he called.

In school, Strong played lacrosse, did javelin and ran. Her coaches saw potential in her, but she never wanted to take it seriously. “I wanted to do sport for joy,” she says.

After graduating from university, Strong got lost in a forest in Guatemala, where she met another young girl and they climbed to the highest peak of Central America together. As they overlooked volcanoes erupting and the sun rising, she told Strong of her plans to train for an Iron Man. “That’s when the seed was planted in my mind,” she says.

Over a decade later, Strong stepped away from her relationship and began training. “It was the hardest thing I’ve done in my life,” she adds. But she says it gave her permission to “start dreaming and living again”.

Though Strong speaks in a thick Welsh accent, she left home at the age of 18. Following a double masters in mechanical engineering, which took her to Portsmouth, France, and Italy, she took a tour across Latina America, where she immersed herself in indigenous communities.

In 2006, she moved to Australia. Her degree took her to work in aerospace for a little over two years, but she didn’t enjoy the patriarchal and narrow-minded atmosphere that came with it: “I just didn’t get on with the sexism.”

Though she stayed in Australia for nine years, she moved back to Wales and has been self-employed for almost 20 years now.

Strong is now a personal coach, host of the Strong Voice podcast, and continues to attempt world records — such as going the furthest distance on a static bike in 24 hours this January. The vegan world champion tells me that while she — as well as many other women — is working hard to challenge the status quo, society has a long way to catch up.

Luckily, she says triathlon is a rare sport — in that it’s very equal. Elites run with amateurs, and the prize money is equal. But it’s a rare sight. And she says all you have to do is turn on Saturday TV to see that the vast majority of sports feature male teenagers.

In cycling, the prize money for the Tour de France is €500,000 for men, while the equivalent for females is a mere €930. Until 2011, she adds that women didn’t even earn a minimum wage as professional cyclists.

The Union Cycliste Internationale argues that this is because women just aren’t quite good enough yet. But Strong doesn’t know when that will be.

Strong became a world champion in just under 14 months. Much of her performance is thanks to her transition to veganism, which happened in 2013. Her wheezing lungs had been holding back her running, so she went through periods of trial and error until she happened across veganism on Google.

The triathlete follows a 100% whole, plant-based diet, often buying snacks from Veloforte, a vegan sports nutrition brand, and grazing on linseeds, goji berries, and match powder. “I like to consume ingredients that naturally lift me up, without the crash and burn,” she explains. During the tough training periods, she eats a lot of dal and curry to aid her recovery.

People often ask Strong how she dreamt so big as a woman in her mid-30s. “I tell people to remove that glass ceiling,” she says. “A lot of the time we put off today for that bigger money, or external acknowledgements, and we realise we’re unhappy along that journey.” 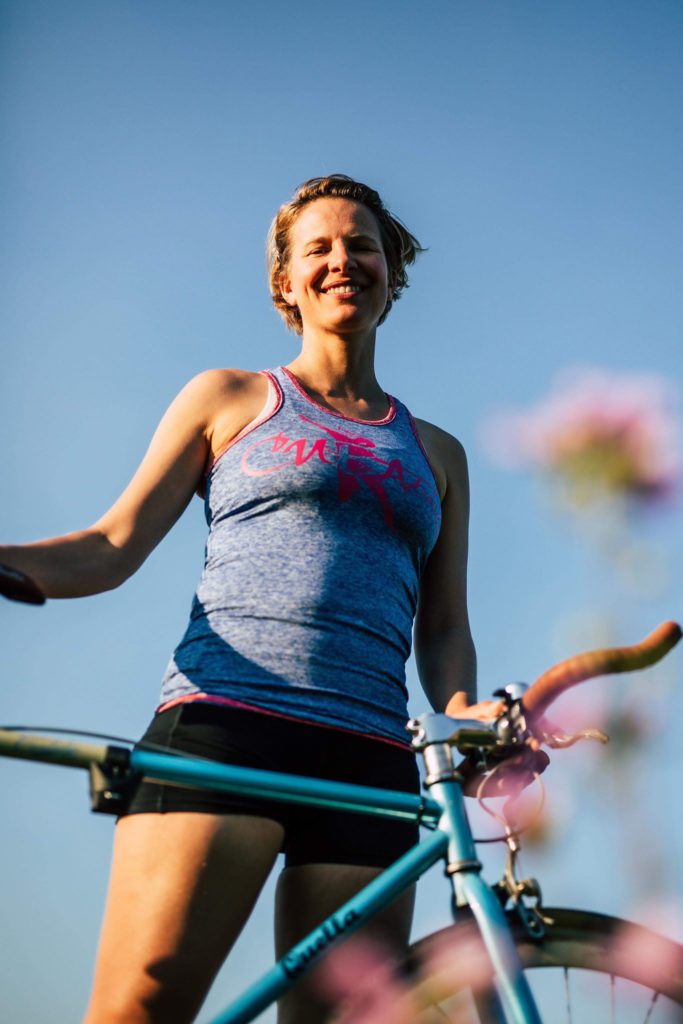 Her personal coaching helps people with performance, life and business. Though she says we often have everything we need within ourselves, she helps to unlock that. For years, she was her own biggest obstacle and though she’s unmarried, with no children, and holds constant guilt for pursuing her own goals, she says she couldn’t strive to climb Mount Everest if she wasn’t content with herself today.

Strong plans to take her work into education too, through shaping a Welsh college’s curriculum so it’s more conscientious and emotionally aware. “Imagine we took everyone in society — the privileged, the underprivileged, the aware, and the unaware, and we lifted ourselves together,” she says.

Read our story on three women who are working to make the British curriculum vegan-inclusive.

If applications for grants are successful, she’ll be serving 200 11-to-16-year-olds, and eventually children nationwide — aiming to empower others.

“Imagine if you’re taught that your strength isn’t that you got an A or a D in maths,” she says. “But it’s that you’re a good listener, a team leader, or a people supporter.”

Olivia Rafferty
Olivia is the Assistant Editor of The Vegan Review. An aspiring Middle Eastern correspondent currently studying journalism at City, University of London, she is passionate about the planet, she believes veganism is the first step to solving the complexities of climate change.
Previous articleImpossible Foods launches first national ad campaign in the US
Next articleVeganism: 5 things nobody is talking about