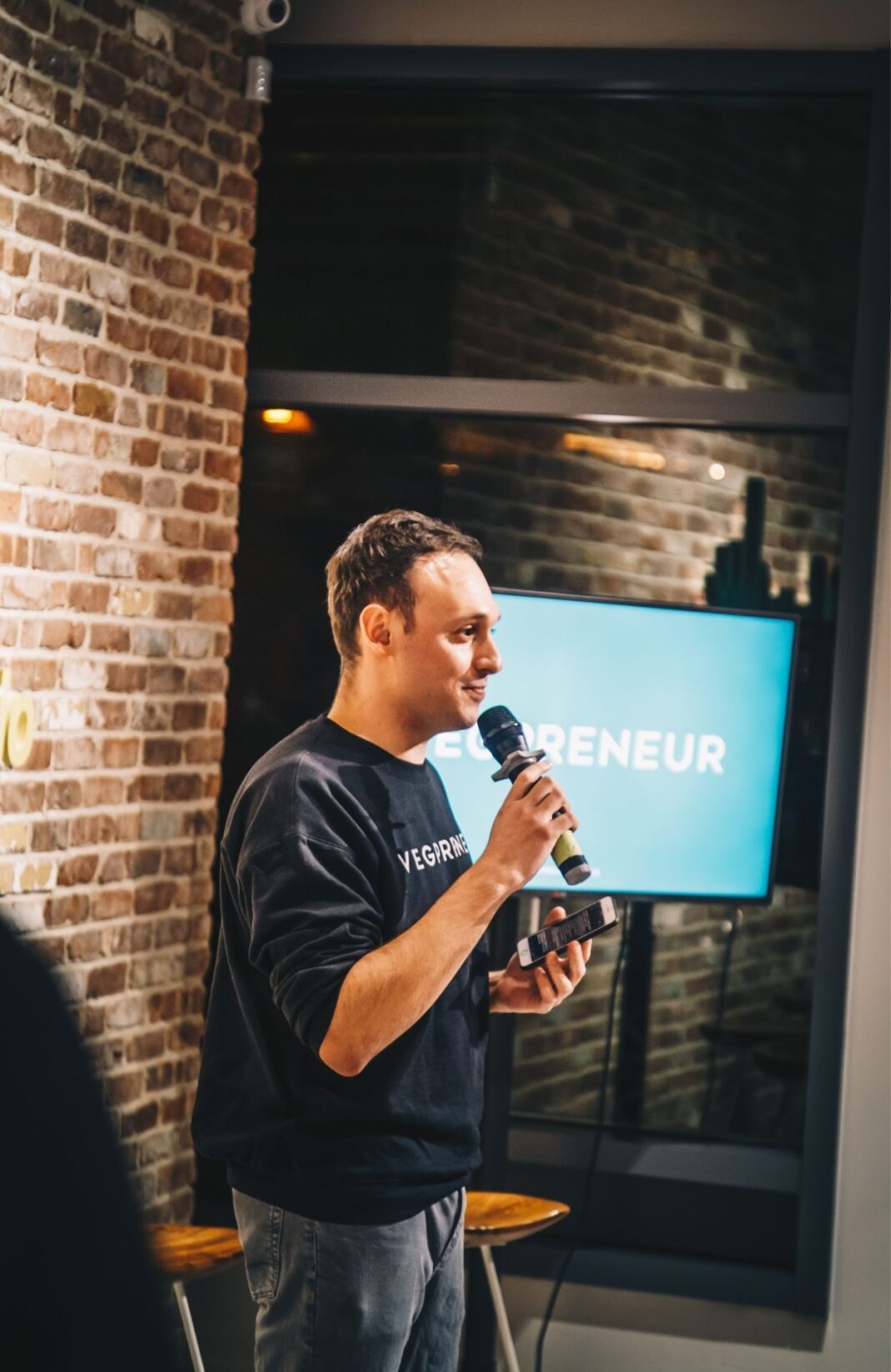 Musicians have this idea that they’re never good enough. They’re constantly trying to prove something. Ditto with entrepreneurs. Noah Hyams has been working on it since he was six years old.

He is a drummer and the founder of Vegpreneur, a community of entrepreneurs innovating in the plant-based and sustainable business space. Hyams has always been interested in music and entrepreneurship. Born to Swiss-American parents in Switzerland, he started his first enterprise in third grade, teaching English to his classmates for 50 cents.

He moved to the US when he was 14, and studied jazz at New York University. But two years in, he switched his major to music business. “I’ve always been very interested in creating value for others,” he says.

“I’ll find myself going to pitch competitions or VC’s offices, and paying attention to what other people are doing,” he continues, explaining how his entrepreneurial mindset has developed. “I’m, very, very obsessed with product-market fit and helping entrepreneurs find that.”

He launched Vegpreneur in 2018 to “create a spotlight for founders innovating with plants in various industries: fashion, food, farming and beauty.” The organisation hosts discussion and panel events featuring CEOs, touching on anything from the future of food to the state of plant-based entrepreneurship. The latest summit featured Miyoko’s Creamery, Tofurky, and Blue Horizon, to name a few.

“We’ve also had pitch nights,” Hyams tells me. The latest was in September 2019, and two out of the four featured companies — P-Nuff and Wanna Date — went on to secure a deal with Mark Cuban in Shark Tank. “That doesn’t mean you’re going to be successful necessarily, but it’s exciting to see the mainstream get enthused about plant-based ideas.”

Vegpreneur also has a blog, which has a weekly Founder Spotlight series. “We feature investors, try to post content that’s interesting, and share companies that are fundraising right now with our community, so they can invest if they wish,” says Hyams. There’s also a Facebook group, as part of the online community. “We try to only have people who really can add value to each other, we’re very focussed on the founders.”

He adds that the group is interested in people taking sustainability seriously and getting into this lucrative space to have a positive impact on the planet, not just looking to make a quick buck: “That’s where I think you meet some of the most interesting people.”

And while the companies have to be plant-based, Hyams says the biggest challenge is dispelling the misconception that individuals have to be vegan to participate in the Vegpreneur community: “I’m very dedicated to not creating this silo. It’s cool to be around people who are vegan, and I love it, but at the end of the day, to make this a mainstream concept, we’re going to have to push to get everyone involved. We actually prefer it if you’re not [vegan], because you might learn something.” 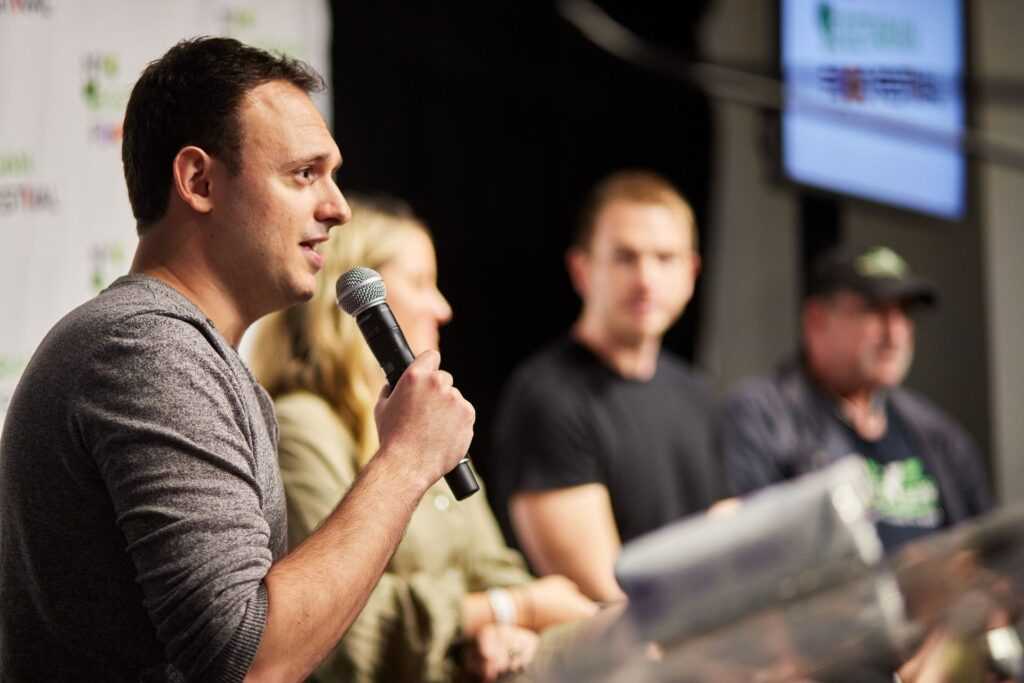 Another obstacle, of course, has been Covid-19. Live events have been hit hard, with organisers having to factor in time zones, video software and virtual breakout rooms. While the Vegprenuer founder considers himself a citizen of the world, he always thought the show would be “very New York, very central”.

“I always thought people would come to us; but now, we went to them.” He recalls how people from different parts of the world “gave themselves jet lag” so they could stay up all night to attend the conference. “There’s something special about actually being there live versus watching it later.”

When hosting an online conference, Hyams says the key is authenticity and interactiveness. “Tune down the production value because if it starts looking like a television show, nothing can go wrong and it’s not as exciting. People want to see action; you want friction,” says the musician. “That’s jazz, right?”

Alongside Vegpreneur, he also launched Songathon, a platform empowering and supporting songwriters. “As a drummer, I’ve played with countless songwriters. I think they’re the underdogs. Without songwriters, there’s no music industry,” he asserts. “Yet for some reason, they’re the ones most usually slipped under the rug and not getting a fair share. If you can write a good song, you can change the world.”

The entrepreneur is doing his part in the community, and it’s being noticed. Just last month, he was interviewed by Bloomberg Radio, to mark Vegpreneur’s second anniversary. He calls it a personal highlight: “That’s the point, right? Bloomberg is interested in these topics; it’s interested in Vegpreneurship, as I like to call it.”

Hyams, who went vegetarian in 2013 and slowly transitioned to a plant-based diet, wants vegans to knock objections. Don’t let anybody doubt your products, he says: “Don’t call your stuff fake. When you say that, it makes it sounds like you’re giving something up or you’re being tricked.” Highlighting the advantages is crucial. “Millennials and, even more so, Gen Zennials care about sustainability a lot.

“If you start making people feel good about the product they’re purchasing and showing them: ‘You save this much water. You save these many animals,’ you’re going to make the competition have to step up real quick. I don’t think anybody out there actually wants to have the impact they’re probably having if they’re buying non-plant-based products. If you start calling that out, you get rid of those objections.”

With Vegpreneur, the main idea is to “inspire, showcase and invite as many people who are interested in entrepreneurship to consider building a plant-based company”. The organisation is gearing up for a slew of events next year, and Hyams says it’s got a long way to go: “I know people have gotten jobs and connected with each other. I know we’ve inspired a lot of people. A big chunk of what we do is to try and get more smart people into the space from the entrepreneurial and investor side, because we know we need more.”

Anay Mridul
Anay is journalism graduate from City, University of London, he was a barista for three years, and never shuts up about coffee. He's passionate about coffee, plant-based milk, cooking, eating, veganism, writing about all that, profiling people, and the Oxford Comma. Originally from India, he went vegan in 2020, after attempting (and failing) Veganuary. He believes being environmentally conscious is a basic responsibility, and veganism is the best thing you can do to battle climate change. He gets lost at Whole Foods sometimes.
Previous articleMenus to see a rise in plant-based food post-pandemic, finds study
Next articleCasa de Carne director Dustin Brown: ‘A film idea comes from images in my head’