Vertical farming may be sustainable, but can it sustain itself? 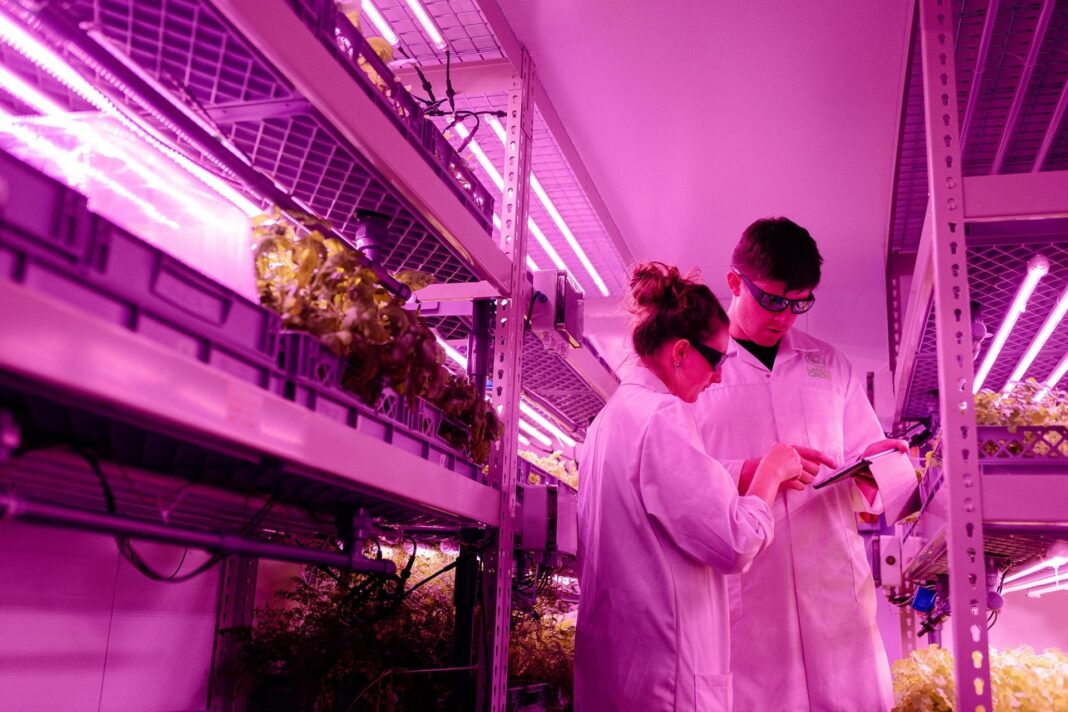 Vertical farming businesses have seen a surge in investments over the past year. But can indoor crops ever overtake imported produce?

A gorgeous pink light will hit you as you enter a research farm belonging to LettUs Grow, an agricultural technology company. As you step into the walk-in fridge-style farm, you find yourself surrounded by shelves full of salad. “If you were to pick up a tray, all of this mist would billow out of the sides, which looks pretty sci-fi,” says India Langley, LettUs Grow’s communications lead.

Sitting in a room above the farm, Langley explains why we need to change our agricultural practices. She says: “The land that we’re using is getting more and more degraded. Our soils are becoming depleted, which is why we’re continuing to push out into natural lands.”

She explains that vertical farming is part of a solution to this problem. By stacking crops using shelves, this farming method uses much less space compared to traditional agriculture. It also avoids using soil, as they are either grown in water or sprayed with mist containing nutrients.

This year has proved there is a hunger for change. Many vertical farming companies have seen investments and the global market is expected to reach over $12 billion by 2026.

LettUs Grow raised over £2 million in January. The rise in investments comes as no surprise to Langley. She says that people are investing to set up “food security for future generations”. Vertical farms offer “a good business opportunity” and are a move in the right direction. 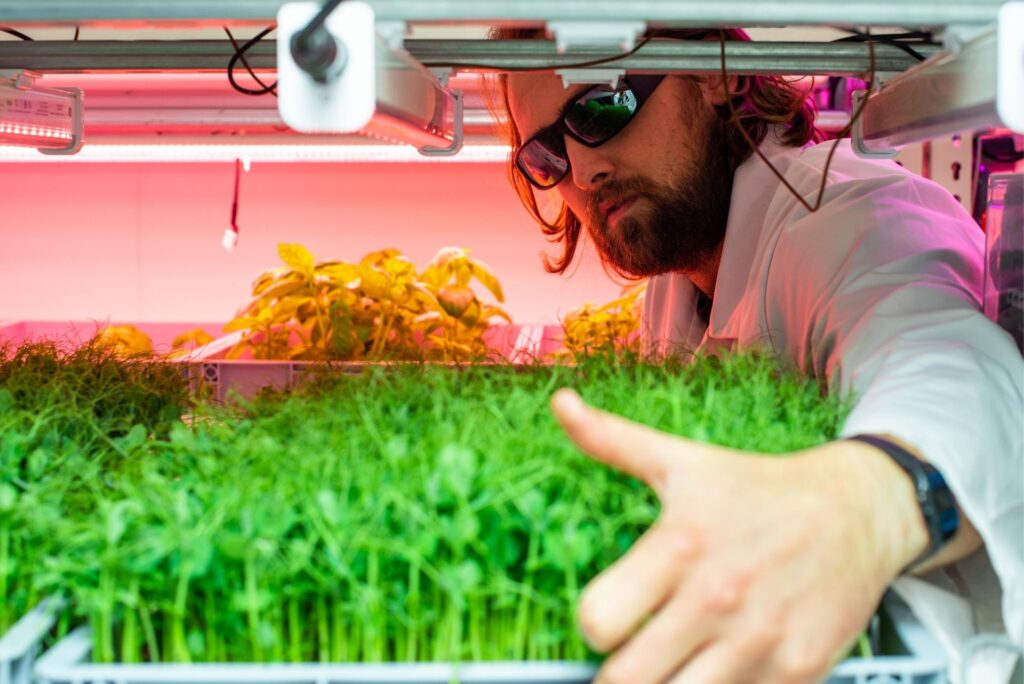 By growing food indoors, vertical farms have a long list of benefits. The controlled environment means the food is not vulnerable to climate change fuelled hazards. Over 80% of UK farmers say they are experiencing more extreme weather events, which are affecting their crops. However, vertical farms can grow year-round without any interruption. It also means that the crops grow faster.

Despite being able to grow their vegetables faster, Davies doesn’t want to create any food waste. He says: “We work very closely with our customers to understand exactly how much they need and what they need, so that we’re minimising food waste.”

Vertically farmed food is also chemical-free. The crops are grown in an environment free from insect and animal interference, so there is no need for pesticides. Entering LettUs Grow’s research farm involves wearing a lab coat and wellies to ensure no pests can get in.

Both Davies and Langley agree that vertical farming is not going to overtake traditional agriculture, nor should it have to. It makes sense to grow certain crops outdoors, like wheat.

However, that doesn’t mean vertical farming will be a slow industry. Langley says: “I see vertical farming slotting in and being part of a patchwork solution of various different types of agricultural systems.”

At Plenty, a vertical farm in San Francisco, the aim is to reduce the need for imported food. Its research scientist Dr Sarah Federman says: “Our goal is to bring flavourful, nutritious produce year-round to local communities and dramatically reduce the dependence on imports.”

Harvest London used its recent investment to increase capacity, by opening a second site. However, Davies sees many areas of improvement for future investment. 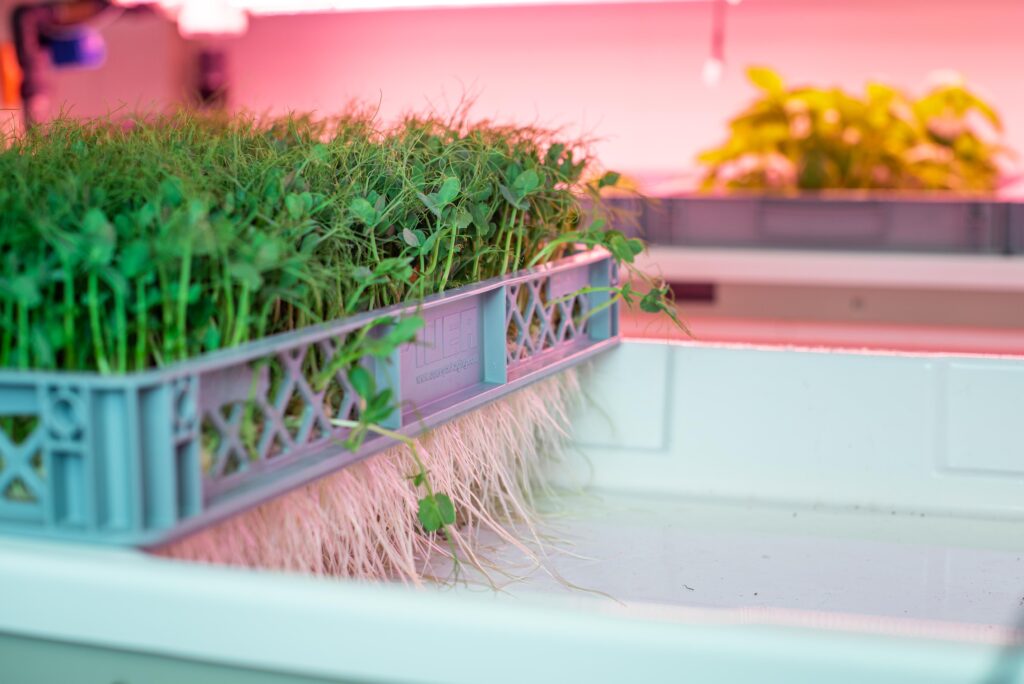 Vertical farming is a highly automated process. However, manual labour is still needed to plant and harvest the food. Davies says robotics will play a large role in the future, where “robot arms” will do the dirty work. He also anticipates a change in our seeds: “All the seeds that we use are still designed for outdoor use.”

Instead of being unnecessarily pest- and climate-resistant, Davies says seeds could use their energy elsewhere. This could include improving the taste and size of the crops. But there is a lot more research to be done.

Another area of improvement is renewable energy. As a sustainable farming method, a low carbon footprint is essential. Harvest London already runs its farm off clean energy; however, Davies wants to start using organic waste to power it.

He says: “You can put organic waste into a chamber with no oxygen and the organic material breaks down. In the process of breaking down, it produces electricity.”

These advancements are still important even if vertical farming will not overtake traditional agriculture. Surprisingly, LettUs Grow gets lots of inquiries from traditional farmers. Langley says: “We do often get buyers who are just looking for something a little bit more stable. They don’t want to lose their crops to pests or weather changes.”

Federman expects vertical farms to become a much more popular method: “We hope that their proliferation will one day mean we no longer have food deserts or lack of adequate access to healthy, nutritious food anywhere on the planet.”

Raphael
Previous articleVegan berry, coconut and hazelnut smoothie bowl
Next articleOuroboros Steak: Where do you draw the line with cell-based meat?