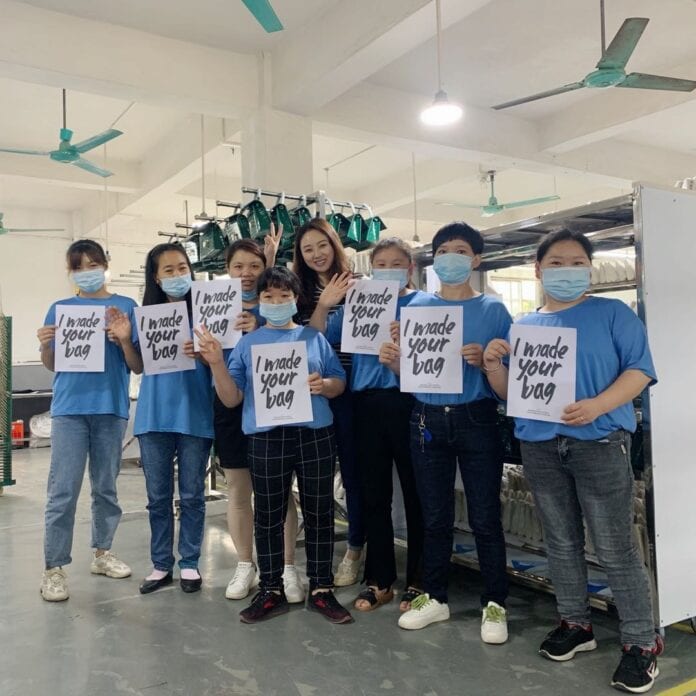 Minutes away from missing a flight from Vietnam to Guangzhou, Joey Pringle almost decided to fly to Shanghai instead. “I have never had a more overwhelming feeling of destiny in my life,” he says. He’s the co-owner of Veshin, a vegan fashion company based in Guangzhou, China. Originating from the UK and China, Pringle and Yu’s partnership represents two very different nations coming together to form one.

Even the business name is a hybrid in itself. ‘Ve’ stands for vegan and ‘shin’ (xin) is Chinese for heart.

“It’s in our blood, it’s in our veins, and it’s in our heart, so it just made sense to call it that,” he adds. A brand specialising in vegan bags and accessories, Veshin is on a mission to “deliver industry change”.

Climbing up the fashion ladder

“When I turned 25, I started to look around at humanity, questioning whether we were taking the necessary steps to conduct ourselves correctly,” Pringle says. The ecopreneur turned vegan overnight a year-and-a-half ago. Describing himself as a “fairly conscious guy”, he has always been drawn towards ethical practices.

Working as a carpenter — and more recently for tentree as a backpack designer in Canada — he realised sustainable fashion was where he belonged: “I knew I wanted to get back onto the ladder, and start at the bottom, because that’s the ladder I want to climb to the top of.”

It was through this job, where he often travelled to Asia to visit factories supplying tentree, that he met Hongliang. Originally set out to stop business with Hongliang’s factory Hermia, they bonded over their shared stance on the direction of China’s manufacturing industry.

For a year, Pringle worked as Yu’s consultant. Providing useful tactics in getting Hermia to the greenest, most transparent possible outcome, Hongliang offered him a more permanent position: “Your vision for this factory is so clear, you should just become the owner of it.”

So, after terminating his time at tentree, Pringle moved to China and co-founded Veshin. 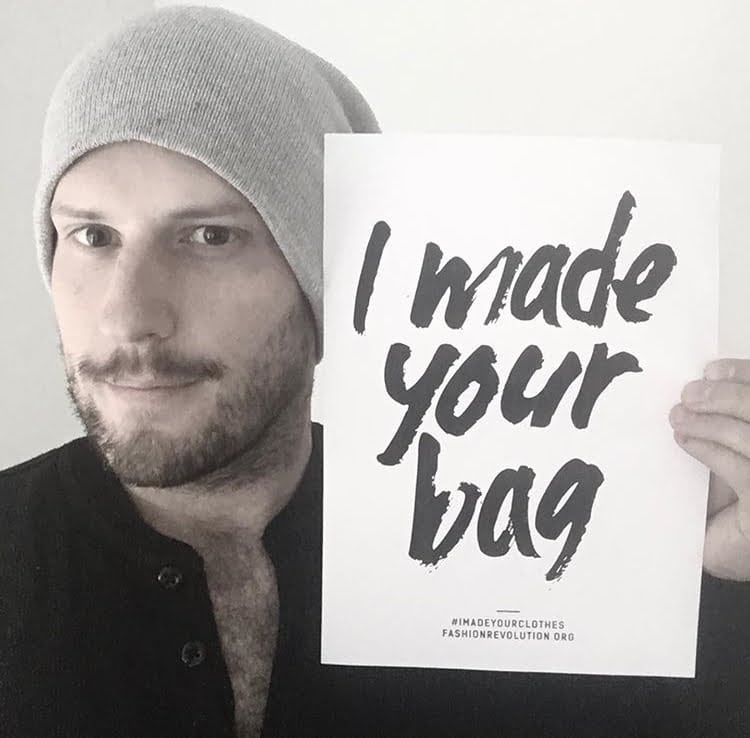 From wallets to handbags to small accessories, Veshin provides a manufacturing platform to the brands that care about the planet. 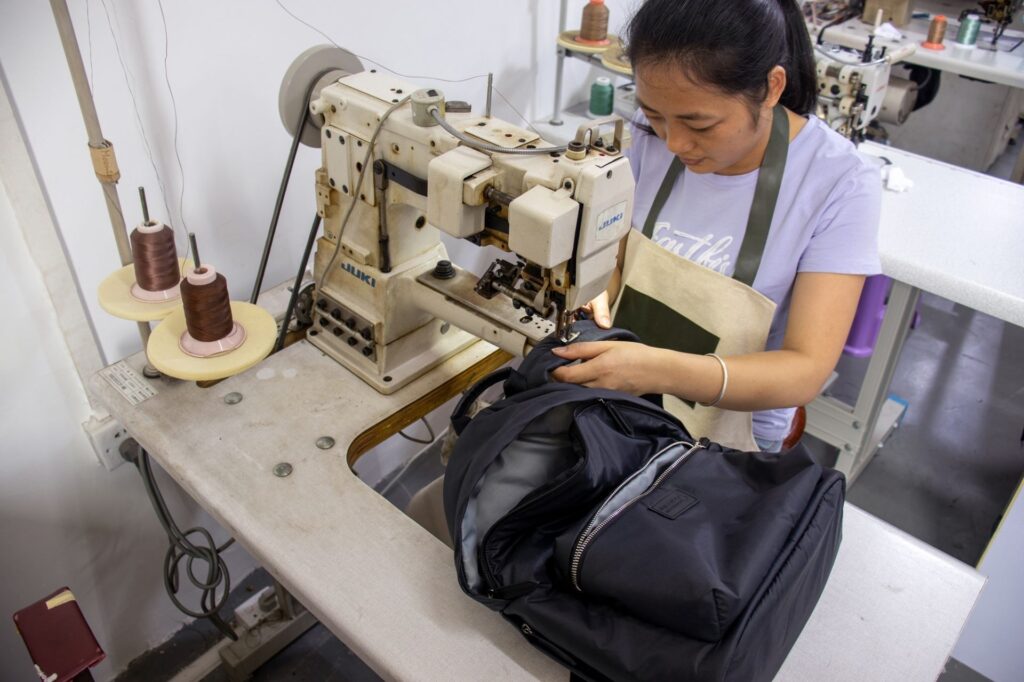 What materials does it use?

Pringle has always had a soft spot for cork and hemp. However, he explains that when he was working with European suppliers, transparency was simpler. “Whereas with China, cork is still coming from Portugal, but it has to come through a whole load of processes, resulting in a lack of transparency,” he continues.

Hemp, on the other hand, continues to tick every box: a very transparent supply chain, low carbon impact, low water use, easily mixable with recycled polyester and cotton, and extremely versatile. “But cactus is the new one I’ve fallen in love with,” Pringle says.

Vegan leather is being sourced from all types of plants today. While apples and mushrooms are the latest additions, cactus is the most successful to break into the industry so far. But it’s not quite the answer to sustainability just yet.

Pringle explains cactus still needs Polyurethane to work, which means it cannot be biodegraded come the end of a product’s lifecycle. But after just having partnered with Mexican vegan leather supplier Desserto, he believes cactus leather is very close to solving the animal-leather alternative dilemma.

Currently a small office team of four people, each of the vegan fashion business’s staff members work based on a philosophy of sustainability, transparency, and environmentally progressive values. These include:

Pringle highlights the main problem in the manufacturing industry: “Factory owners are only doing the bare minimum.” While he believes there is huge potential for fashion to take a positive turn, especially post-coronavirus, he knows a lot of his hopes are a consequence of the bubble of progressive people he surrounds himself with daily.

With a background in visiting factories, he understands there is still a lot of work to be done. “Many factories are not good at understanding the question, or having the correct initiatives,” he says. He plans to change this with Veshin via Instagram. “There’s so much that can be done, and it’s really quite simple.”

The account is designed to show “radical transparency”, normalising the term rather than portraying it as a benefit, or to greenwash the business. Pringle elucidates that the problem also arises from the brands themselves. He disagrees with a lot of their reliance on seeing a logo certification, and says the only way to keep learning and improving transparency is if audits are carried out by brands in person. He hopes his Instagram will push this type of honesty: “A lot of it’s going to come down to my values, and how I want to showcase every little detail. The key is striking the balance between securing the right certifications and going above and beyond with radical transparency.” 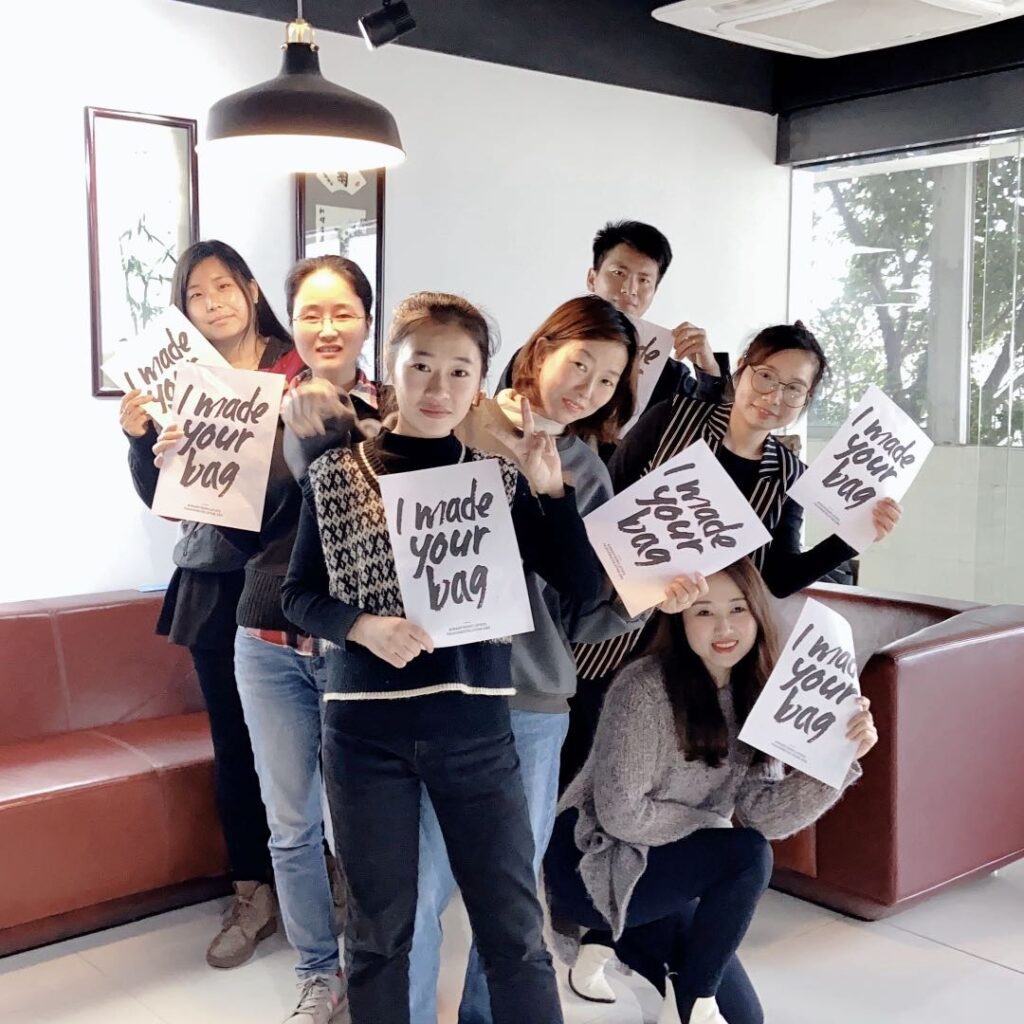 Social media has been a massive asset to Veshin. Launching a business amid a pandemic is not easy, especially for Pringle, who was stuck in the UK — his team located on the other side of the world. Pringle says: “With mother nature putting the world and the fashion industry on pause, Covid gave me the best possible spotlight to launch Veshin.”

With people constrained within their homes, a lot more time suddenly came into their hands. Pringle found networking with like-minded people a lot easier, and the company was lucky enough to have secured orders from businesses during Covid-19. A slower pace gave him the time to build a website, carry out proper storytelling, and an ultimately very successful launch.

Nonetheless, Pringle says: “I’m trying to stay grounded, and not get ahead of myself.” Communication is still not the easiest, and travel bans also mean the co-founder may not be able to move to China until spring 2021. 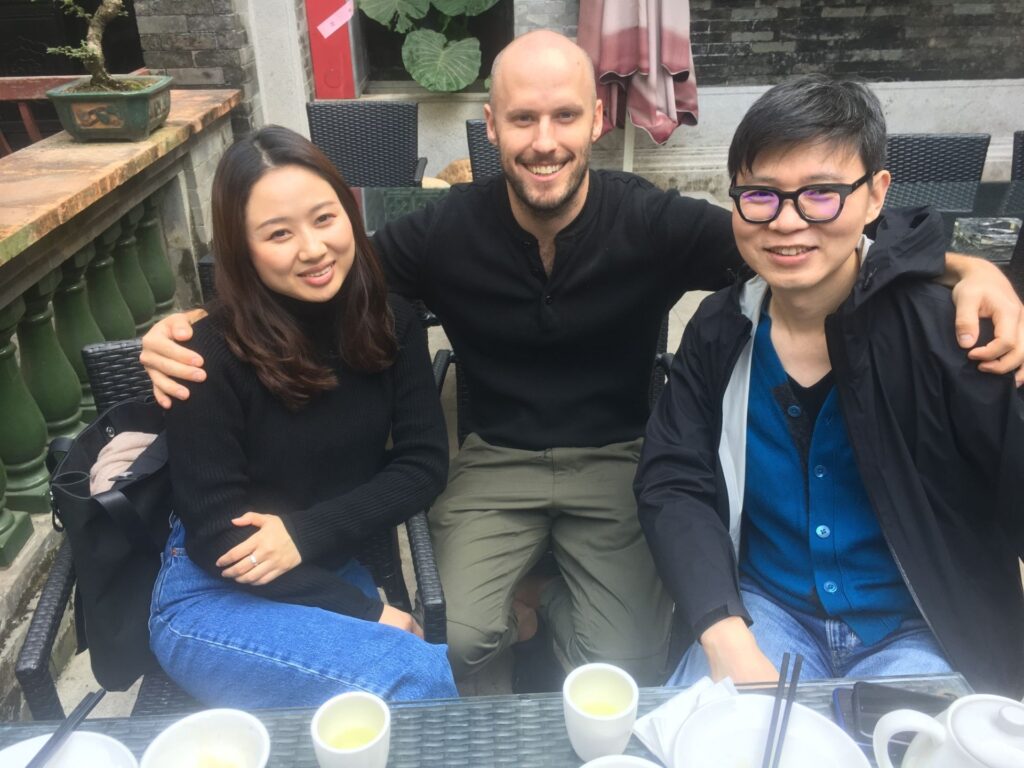 His business partner doesn’t even speak the same language. “We translate through WeChat and our incredible executive director Xiao who speaks better English than me. That’s what’s even more magical about the story,” he says and then laughs. But his priority has been ensuring Hongliang’s factory Hermia stays afloat. The business specialises in luxury clientele, so was not too affected by the virus, but without Hermia, there is no Veshin.

Pringle likens it to an egg in a nest: “If there’s no nest for the egg to sit in, the egg won’t hatch.”

Redefining the ‘Made in China’ label

When people think ‘Made in China’, they think ‘cheap’ and ‘unreliable’, and this has created something labelled the ‘Made in China stigma’. Pringle says that isn’t fair. People just need to be shown how things in China are made. His transparency tactics will hopefully reverse a lot of that mindset.

One major problem China faces is understanding sustainability. On a government level, the country will see the world’s greenest cities in less than five years’ time. On a personal level, Pringle believes it may take decades before they seek to change their habits. After the Covid-19 pandemic, and similar zoonotic illness outbreaks, meat markets are beginning to close, but the country is just diverting its practices elsewhere.

Factory culture in China is slowly being replaced by more exciting industries like tech. “Instead, they’re spreading their bad habits in countries in Europe and Africa,” Pringle explains. “And this is the time to catch that.”

Unfortunately, these countries are vulnerable because they are emerging from deep poverty. He believes consciousness is key to saving them: “All the huge factory accidents that happened in countries like Bangladesh, India, and China, those happened because brands and factory were too caught up by capitalism and didn’t care enough about social compliance. That needs to change.”

Starting under Hermia’s roof, and slowly transitioning from animal leather to only plant-based materials, Veshin hopes to keep growing its customer base. Pringle hopes that with time, the company will be known for its fun initiatives: planting vegetable gardens, installing table tennis tables, and setting up basketball hoops. 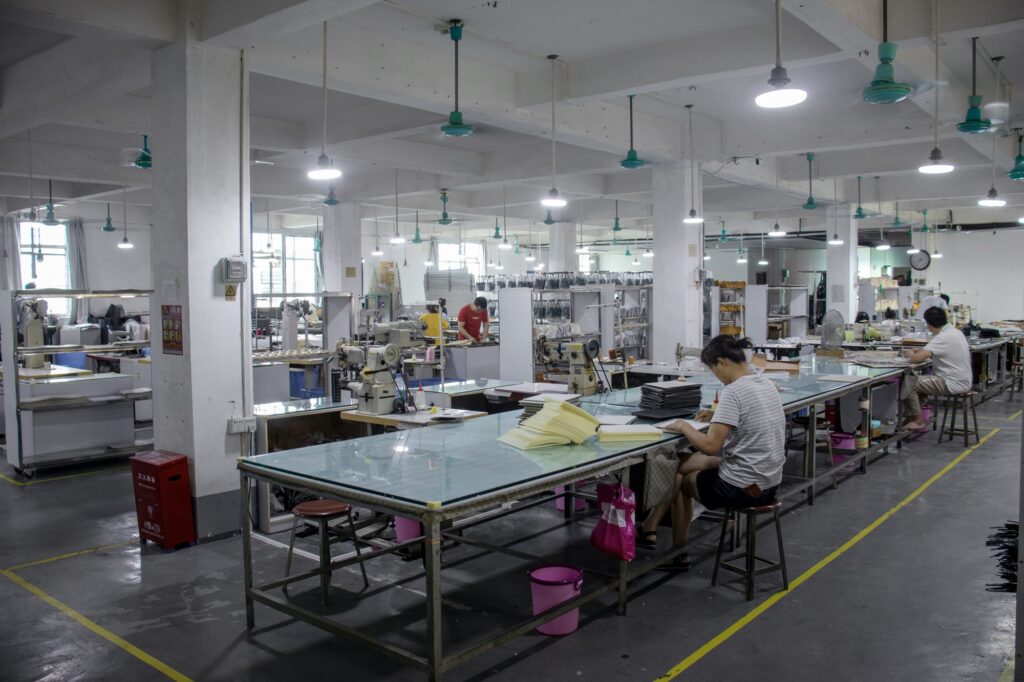 Ultimately, though, Veshin will outgrow Hermia. The company will build its own state-of-the-art custom factory, off the grid, circular and big enough to supply all its worldwide clients. “The longterm plan would be to localise manufacturing, setting up the Veshin model on each major continent, and lowering the carbon footprint of manufacturing,” says Pringle.